Mookie (Spike Lee), left, who delivers pizzas for Sal’s Famous Pizzeria, watches with Sal (Danny Aiello) and his sons Vito (Richard Edson) and Pino (John Turturro) as tensions boil over at the end of a brutally hot day in Brooklyn’s Bed-Stuy neighborhood.
Frame shots courtesy of The Criterion Collection

“DO THE RIGHT THING: THE CRITERION COLLECTION”

IT’S BEEN 30 years since Spike Lee poked the hornet’s nest, and if there’s any question about “Do the Right Thing’s” staying power, consider this:

Another review of this stellar Criterion release argues that the film’s explosive conclusion is dark, manipulative and even dangerous because it advocates violence as a legitimate form of social protest.

Lee, the writer, director and producer, does nothing of the kind.

“DTRT” resonates because it doesn’t take sides. Da Mayor (Ossie Davis), the sage of the block in Brooklyn’s Bed-Stuy neighborhood where the story’s set, admonishes some youngsters to always do the right thing, but doesn’t say what that is. It’s also up to viewers to decide why Mookie (Lee), who delivers pizza for Sal’s Famous Pizzeria, throws a trash can through its window and triggers a riot.

Two quotes—one from Dr. Martin Luther King Jr., one from Malcolm X and both about turning to violence to effect change—that appear after the closing credits make Lee’s position clear.

There are three more reasons why the film, a nominee for best writing and supporting actor (Danny Aiello) Oscars and the Palme d’Or at Cannes, has lost none of its impact.

One, everything about it—Rosie Perez’s opening choreography to Public Enemy’s “Fight the Power,” the provocative narrative (set on one block on one brutally hot day), Ernest Dickerson’s in-your-face cinematography—was/is revolutionary.

Sal arrives at the pizzeria to start the day. Aiello was nominated for a Best Supporting Actor Oscar for his nuanced performance.
Cee (Martin Lawrence, right) and his running mates figure out their next move.
Buggin Out (Giancarlo Esposito) gets tempers boiling when he complains to Sal that there are no photos of African Americans on the wall, just white Italians.
What else are you going to do when the temperature’s rising? Use a fire hydrant to cool off.
Da Mayor (Ossie Davis), the sage of the block where the story is set, listens as Charlie (Frank Vincent) urges the police to cuff the ne’er-do-wells who soaked his car.
Mookie’s sister Jade (Joie Lee, Spike’s real-life sister) tends to the hair of Mother Sister (Ruby Dee) as they watch the comings and goings.

Two, nothing’s changed. People of color are still marginalized, disrespected and victimized.  The death of Radio Raheem (Bill Nunn), which sets the final act in motion, could have been ripped from the front pages. Remember how Eric Garner died five years ago in Staten Island?

Three, Lee, who was raised and lives in Brooklyn, creates a wonderful and memorable array of characters that establishes “DTRT’s” authenticity: Sal (Aiello) and his sons Pino (John Turturro), an overt racist, and Vito, (Richard Edson) his polar opposite; the radio DJ/one-man Greek chorus Mister Senor Love Daddy (Samuel L. Jackson); Buggin Out (Giancarlo Esposito), whose attempted boycott of Sal’s—there are no photos of black celebs on the wall, just white Italians—gets out of hand; Mookie’s no-nonsense girlfriend Tina (Perez); the worldly Mother Sister (Ruby Dee), who watches from her window and stoop.

And that’s just for starters. Every character, no matter how minor, is real. It’s little wonder that the heat has everyone on edge.

Criterion, no surprise, does “DTRT” right. Mastered in 4K from the 35 mm original camera negative (1.85:1 aspect ratio) and supervised by Dickerson, the transfer mines every detail of the heavily-saturated, rainbow palette. You’ll feel the heat, too. Other than a few moments, detail, down to the constant perspiration, is sharp and with plenty of natural film grain. The sound is full and dynamic. “Fight the Power” rumbles in the gut.

Pino, an overt racist, calls out his sensitive, caring brother Vito as Mookie listens in.
Trying to beat the heat under an umbrella, ML (Paul Benjamin, left), Sweet Dick Willie (Robin Harris) and Coconut Sid (Frankie Faison) never hurt for an opinion.
Sal explains to Pino why he came to Bed-Stuy -- and why he’ll never leave.
Buggin Out tries to recruit Jade and Mookie for a boycott of Sal’s.

The two-disc set is also loaded with extras, most of them from the archives—a commentary, making-of doc (remastered in 2K), the Cannes press conference, loads of interviews—and all worth checking out.

Make time, though, for the new ones. New York City Councilmember Robert Cornegy Jr., who shares a wide-ranging interview with writer Nelson George (“The Death of Rhythm and Blues,” “Hip Hop America”) and filmmaker Darnell Martin (“Cadillac Records”), who got her start on “DTRT,” credits Lee with his decision to give up playing pro basketball overseas to come back and make a difference.

In a fascinating interview, Oscar-winning costume designer Ruth E. Carter (“Black Panther”) discusses dressing the characters to convey time, place and the heat and being “cemented to the day.”

Rounding out the new supplements are deleted/extended scenes and an expansive booklet featuring an insightful essay by critic Vinson Cunningham and excerpts from the journal that Lee kept during the production.

Long story short? “Do the Right Thing” belongs in your collection.

Eerily foreshadowing the death of Eric Garner five years ago in Staten Island, a police officer puts Raheem in a chokehold. 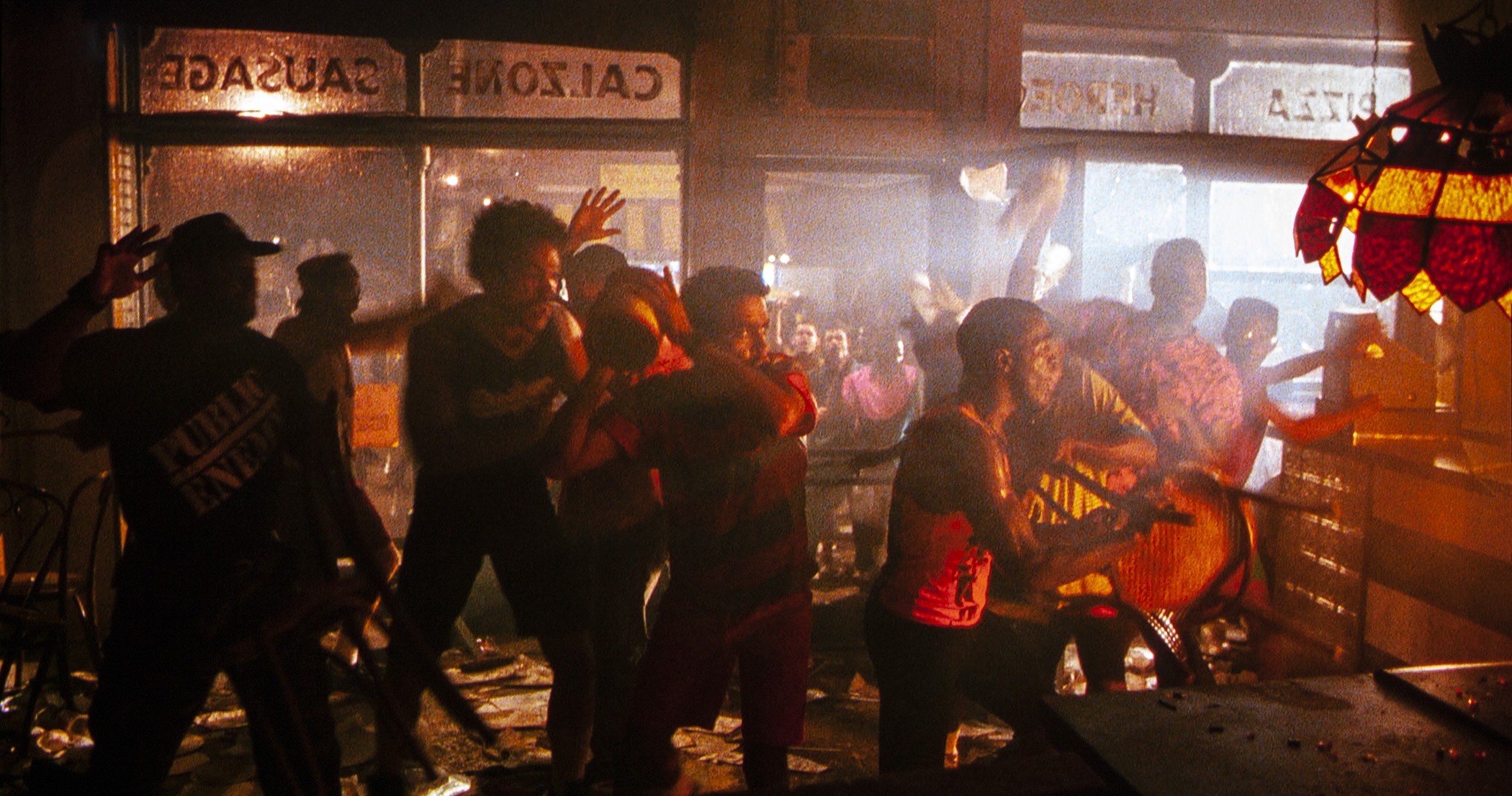 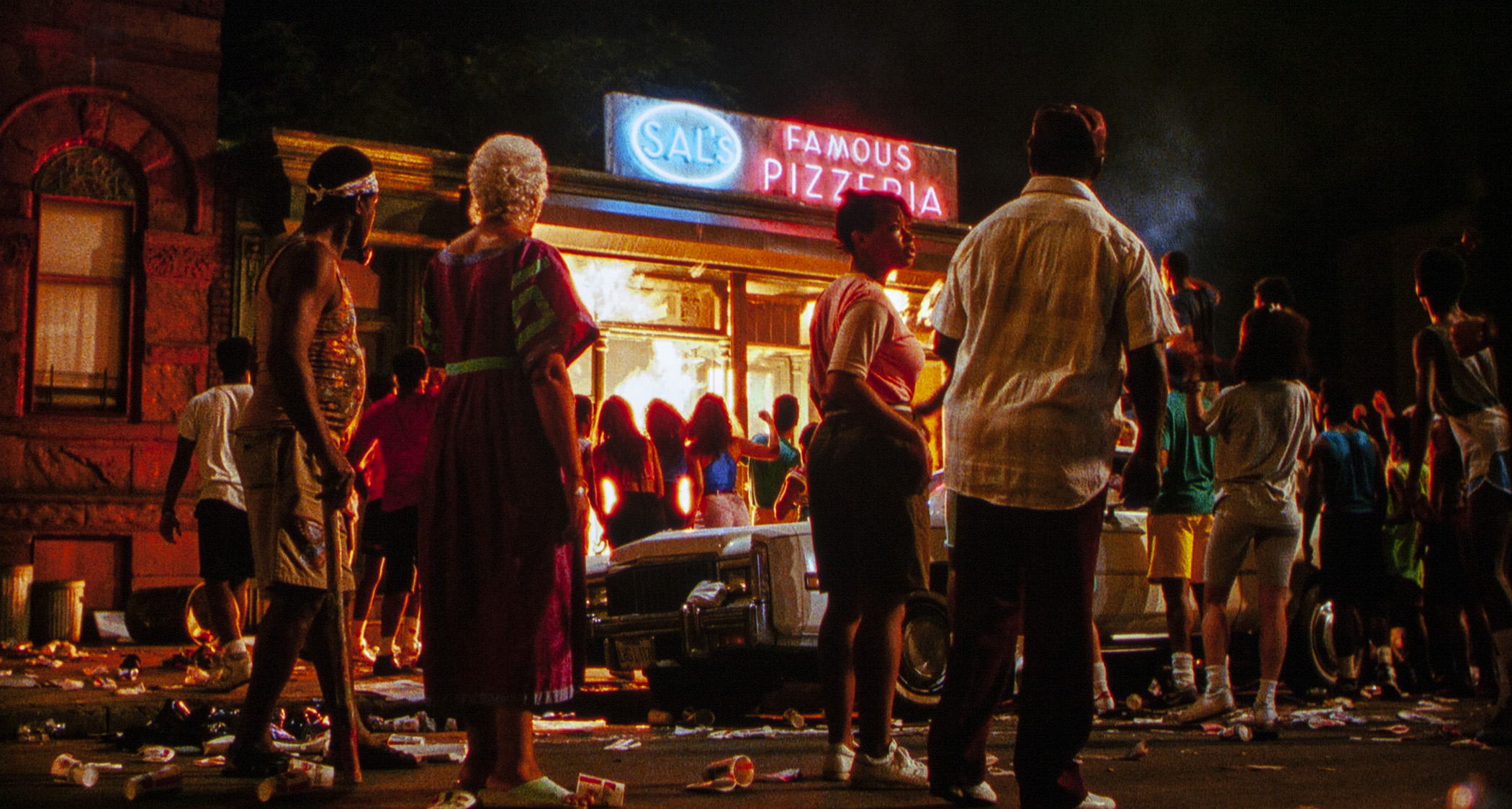 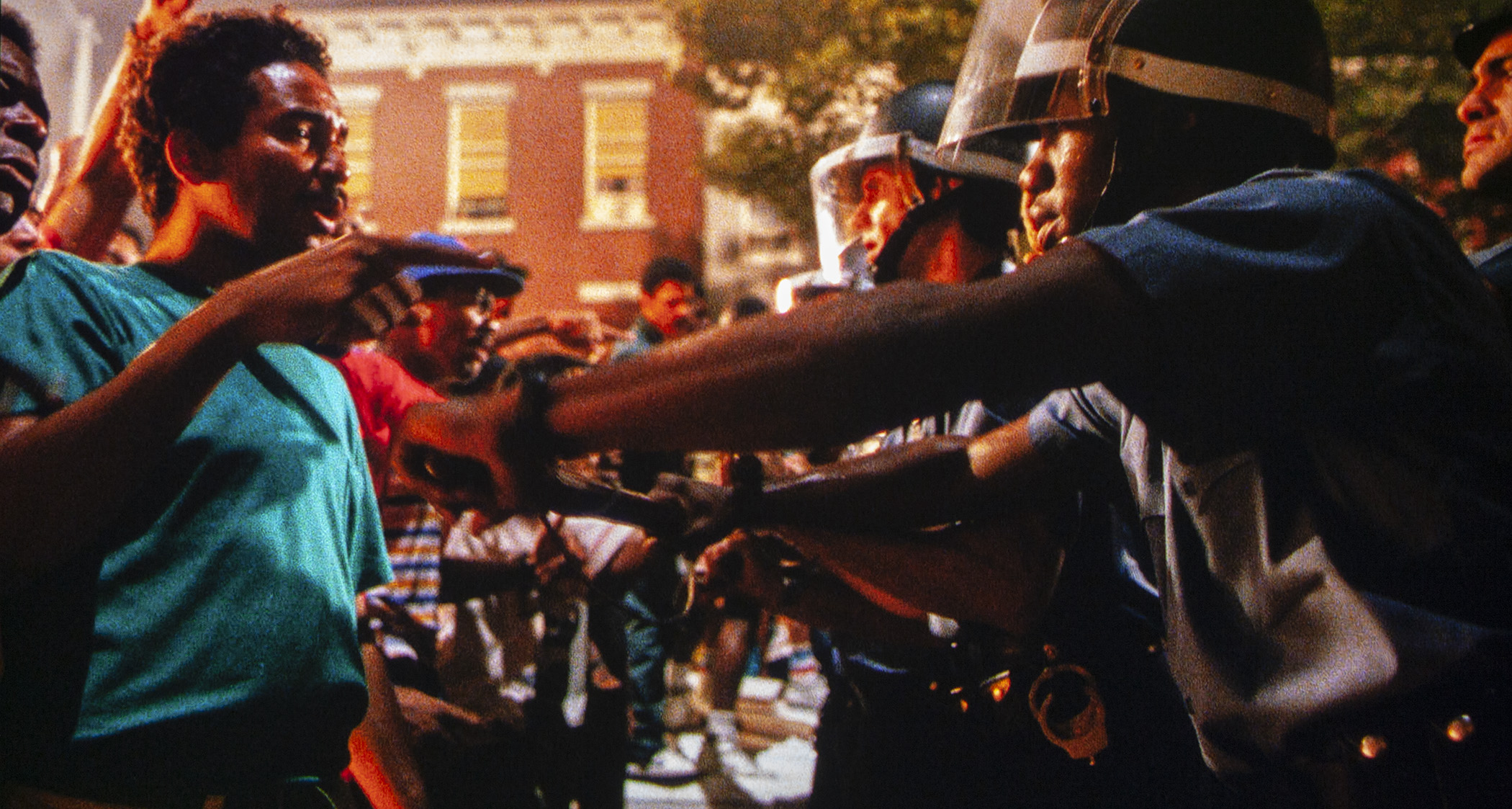 {"items":["eb6f96_244eae4f985240d9a0e5651a0cbfab90~mv2.jpg","eb6f96_000e66a80cb04aa280eca40dff55cecf~mv2.jpg","eb6f96_def1b5f0c3eb4399a4da2ffc1c819854~mv2.jpg"],"styles":{"galleryType":"Columns","groupSize":1,"showArrows":false,"cubeImages":false,"cubeType":"fill","cubeRatio":1,"isVertical":true,"gallerySize":300,"collageDensity":0.8,"groupTypes":"1","oneRow":false,"imageMargin":0.5,"galleryMargin":0,"floatingImages":0,"chooseBestGroup":true,"smartCrop":false,"hasThumbnails":false,"enableScroll":true,"isGrid":false,"isSlider":false,"isColumns":false,"isSlideshow":false,"cropOnlyFill":false,"fixedColumns":1,"enableInfiniteScroll":1,"isRTL":false,"minItemSize":120,"rotatingGroupTypes":"","rotatingCubeRatio":"","gallerySliderImageRatio":1.7777777777777777,"numberOfImagesPerRow":3,"numberOfImagesPerCol":1,"groupsPerStrip":0,"borderRadius":0,"boxShadow":0,"gridStyle":1,"mobilePanorama":false,"placeGroupsLtr":false,"viewMode":"preview","thumbnailSpacings":0,"galleryThumbnailsAlignment":"bottom","isMasonry":false,"isAutoSlideshow":false,"slideshowLoop":false,"autoSlideshowInterval":4,"useCustomButton":false,"bottomInfoHeight":0,"titlePlacement":"SHOW_ON_HOVER","galleryHorizontalAlign":"center","galleryTextAlign":"center","galleryVerticalAlign":"center","scrollSnap":false,"itemClick":"link","fullscreen":false,"allowSocial":false,"allowDownload":false,"allowTitle":true,"allowDescription":false,"loveButton":false,"loveCounter":false,"videoPlay":"onClick","scrollAnimation":"NO_EFFECT","scrollDirection":0,"overlayAnimation":"NO_EFFECT","arrowsPosition":0,"arrowsSize":23,"watermarkOpacity":40,"watermarkSize":40,"useWatermark":true,"watermarkDock":{"top":"auto","left":"auto","right":0,"bottom":0,"transform":"translate3d(0,0,0)"},"loadMoreAmount":"all","defaultShowInfoExpand":1,"allowTitleExpand":true,"allowDescriptionExpand":true,"allowLinkExpand":true,"expandInfoPosition":0,"allowFullscreenExpand":true,"fullscreenLoop":false,"galleryAlignExpand":"left","addToCartBorderWidth":1,"addToCartButtonText":"","slideshowInfoSize":200,"playButtonForAutoSlideShow":false,"allowSlideshowCounter":false,"hoveringBehaviour":"APPEARS","thumbnailSize":120,"magicLayoutSeed":1,"imageHoverAnimation":"NO_EFFECT","calculateTextBoxHeightMode":"AUTOMATIC","calculateTextBoxWidthMode":"PERCENT","textBoxHeight":0,"textBoxWidth":200,"textBoxWidthPercent":50,"textImageSpace":10,"textBoxBorderRadius":0,"textBoxBorderWidth":0,"textsVerticalPadding":0,"textsHorizontalPadding":0,"titleDescriptionSpace":6,"customButtonText":"","customButtonBorderWidth":1,"customButtonBorderRadius":0,"loadMoreButtonText":"","loadMoreButtonBorderWidth":1,"loadMoreButtonBorderRadius":0,"imageInfoType":"NO_BACKGROUND","itemBorderWidth":0,"itemBorderRadius":0,"itemEnableShadow":false,"itemShadowBlur":20,"itemShadowDirection":135,"itemShadowSize":10,"imageLoadingMode":"BLUR","expandAnimation":"NO_EFFECT","imageQuality":90,"usmToggle":false,"usm_a":0,"usm_r":0,"usm_t":0,"videoSound":false,"videoSpeed":"1","videoLoop":true,"galleryLayout":6,"gallerySizeType":"px","gallerySizePx":300,"allowHover":true,"mobileSwipeAnimation":"NO_EFFECT","gotStyleParams":true,"showVideoPlayButton":true,"selectedLayout":"6|bottom|1|fill|true|0|1","layoutsVersion":2,"selectedLayoutV2":6,"isSlideshowFont":false,"externalInfoHeight":0,"externalInfoWidth":0},"container":{"galleryWidth":2561,"galleryHeight":1440,"scrollBase":0,"height":null,"width":null}}
Rosie Perez made her film debut as Tina, Mookie’s no-nonsense girlfriend and the mother of their son, Hector.
Mookie and Sal talk outside the ruined pizzeria the morning after the riot. Even though Mookie had a role in it, his motivation is never explained. Did he do it to turn the rioters away from Sal?