Warner Archive’s remastered “The Set-Up,” earns a spot with the classics 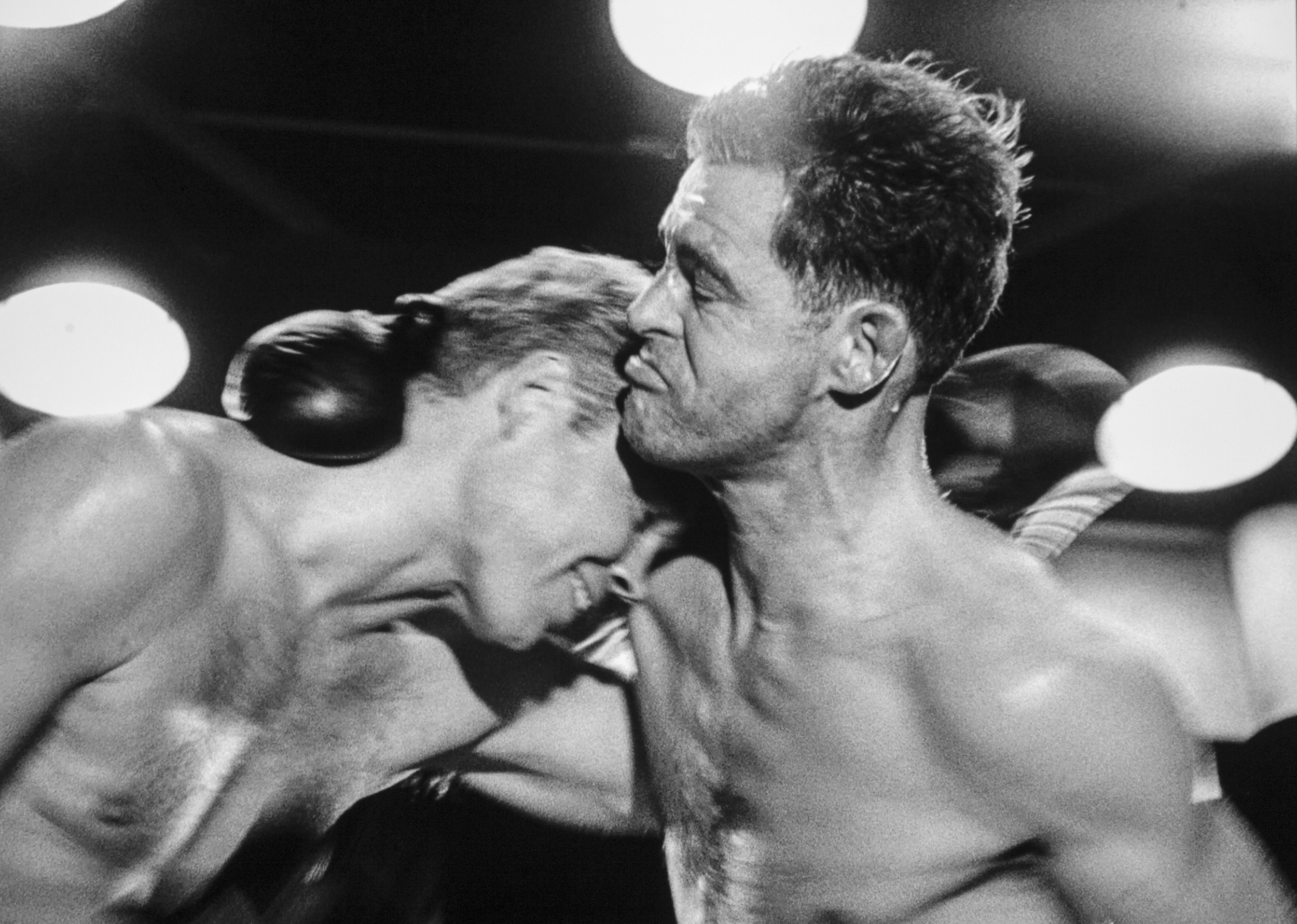 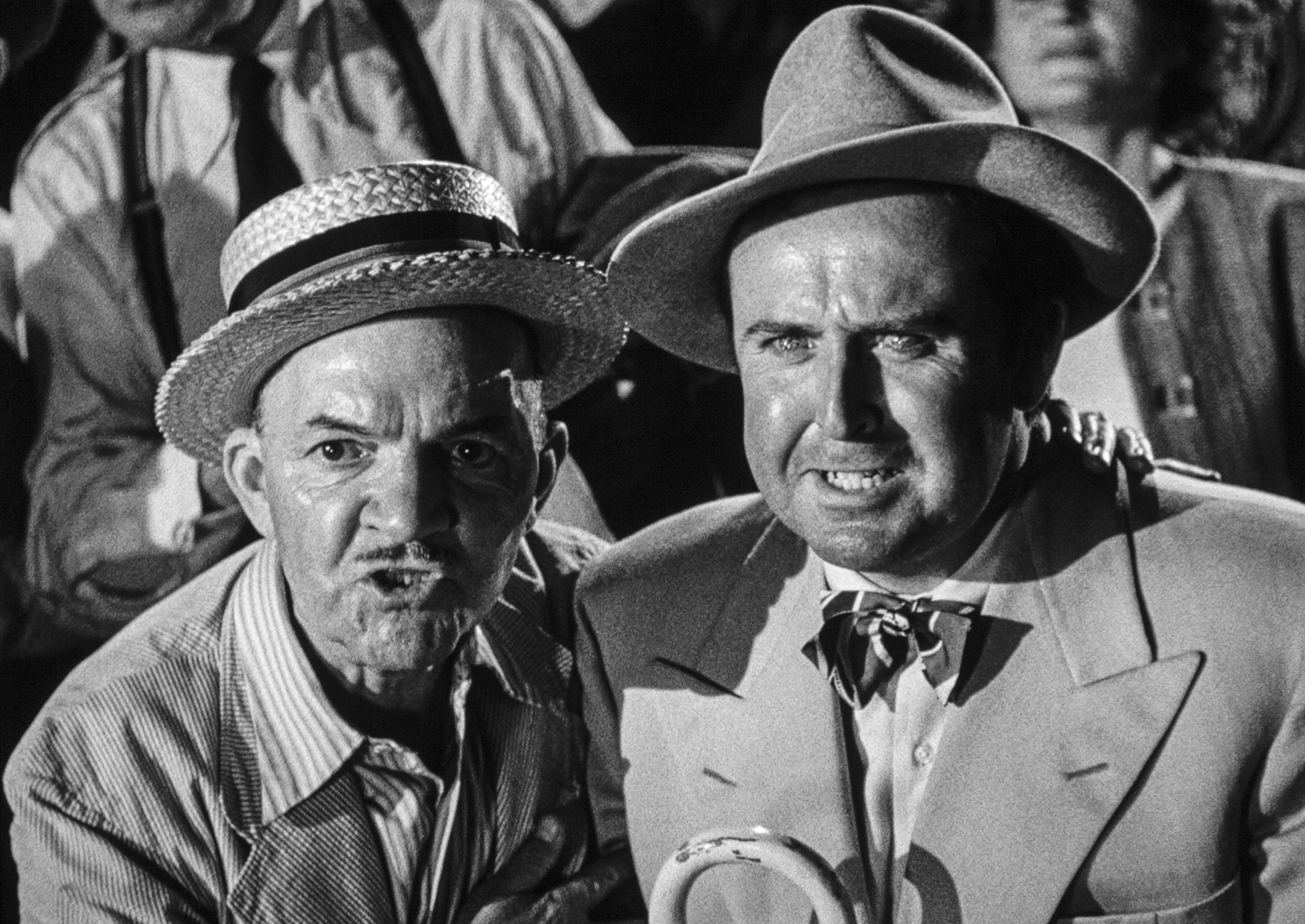 (1) The violent exchange between Bill "Stoker" Thompson (Robert Ryan) and Tiger Nelson (Hal Baylor) during their four-round bout. (2) A blind spectator (Archie Leonard), right, gets a play-by-play call of the action from his ringside partner (John Butler).

A number of people are entering the town’s arena for the weekly night of boxing with seven scheduled bouts. The main event is Luther Hawkins vs. Boom Boom Bastogne for 10 rounds. Another is Stoker Thompson vs. Tiger Nelson.

A ringside seat will cost you $2, dress circle seats are $1.50, and the peanut gallery is just 75 cents.

Martin Scorsese says he first saw “The Set-Up” in 1960 on 16mm, during a film class at Washington Square College in Manhattan. The professor had already covered the silent era and German Expressionism, and was now examining modern cinema. At the time, “Set-Up” was one of a few films captured in “real-time,” running only 72 minutes. Three years later, the classic western “High Noon” (1952) would follow a similar real-time format.

“Set-Up” opens with a long tracking shot by cinematographer Milton R. Krasner (“All About Eve,” “An Affair to Remember”) showing a huge clock along the busy street in front of the Paradise City Arena. Before recording his commentary for the DVD edition in the early 2000s, Scorsese showed a 35mm print of the boxing film as inspiration to his cast and crew before filming “The Aviator.” “I was drawn into the allegorical world of Paradise City, where everything deals with the notion of a kind of fate and chaos of life,” says Scorsese. “The people are down on their luck… and that’s why it’s so universal. A lot of us are in that city.”

(1) "The Set-Up" was released on March 29, 1949. (2) The fictional town of Paradise City, where the local arena has boxing on Wednesday night and wrestling on Friday night. The real-time clock is visible throughout the film. (3) Patrons check out the boxing line up. (4) The $50 handshake between Stoker's manager Tiny (George Tobias) and Tiger Nelson's manager Danny (Edwin Max) guarantees the set-up.

Eventually, the camera pans toward the Cozy Hotel across the street from the arena, and then tracks through the second-floor window right over Bill “Stoker” Thompson, played by character actor Robert Ryan.

Director Robert Wise (“West Side Story,” “The Sound of Music”) mentions that Ryan was set for the role since he had been a contract actor for RKO – the studio making the film – plus he’d been an intercollegiate boxing champion at Dartmouth. “So, he seemed ideal,” said Wise. But the original character from the 1920s poem by Joseph Moncure March, on which the script was based, had been an African-American boxer. Ex-sports writer Art Cohn from San Francisco adapted the poem for his first screenplay.

Stoker’s wife, Julie (Audrey Totter) tells him she’s got a headache and she’s not going to the fight. Stoker had already gotten her a good seat: Row four, section C. But years of seeing Stoker beaten and bruised has taken its toll, and Julie’s seen enough. “Two hours after your last fight, you still didn’t know who I was,” she says.

(1) Stoker gets some rest at the Cozy Hotel before his late evening boxing match. (2) His wife Julie tells him she’s not going to the fight. (3) With his bag in-hand, Stoker heads to the Paradise City Arena. (4) Once inside, he takes a peek at one of the earlier bouts as a man yells, "Kill him! Kill him!"

But tonight Stoker feels different; he’s sure he can take the 23-year-old fighter, 12 years his junior. The only problem is, Stoker’s manager, Tiny (George Tobias) and cutman, Red (Percy Helton) are on the take from the mob to give the kid the win. All they have to do is tell Stoker to take a dive during the third or fourth round. But Tiny and Red have a different plan. They think Stoker is bound to lose anyway, so why tell him? Then they get to keep the money for themselves.

Stoker tells Julie he’s just one punch away from a rematch with the kid for a top spot on a fight card, which would guarantee $150.

“I remember the first time you told me that. You were just one punch away from the title shot then. Don’t you see Bill? You’ll always be just one punch away. What kind of life is this? Springfield, Middletown, Unionville, Paradise City. How many more beatings do you have to take?” — Julie Thompson

If he can string a couple wins together, Stoker feels he can finally retire, and then buy a piece of up and coming middleweight boxer Tony Martinez, or a beer joint, or a cigar stand in Union City.

The camera pans to the alarm clock, which now says 9:17. Stoker walks across the street from the hotel to the arena with his bag in hand, holding his shoes, shorts, and robe. “He’s going to work,” says Wise. He stares at the night’s boxing poster seeing “Stoker Thompson vs. Tiger Nelson – Four Rounds,” as Bat, a program vendor, tells him good luck and that it’s nearly a sellout. The camera follows right behind Stoker as he takes a peek inside. He stops beside a fan yelling. “Kill him! Kill him! Kill him! Keep it up! Come on! Kill him! 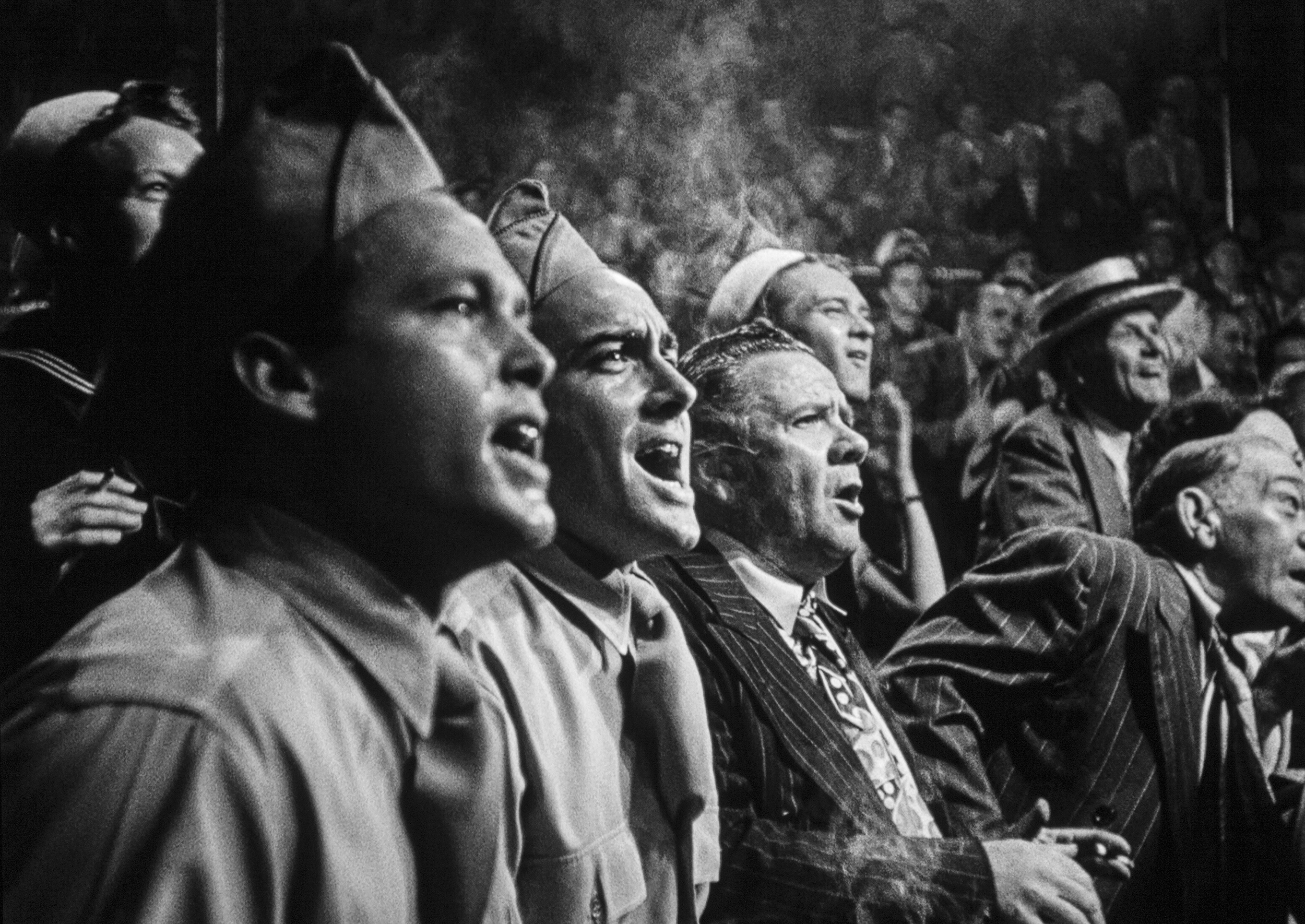 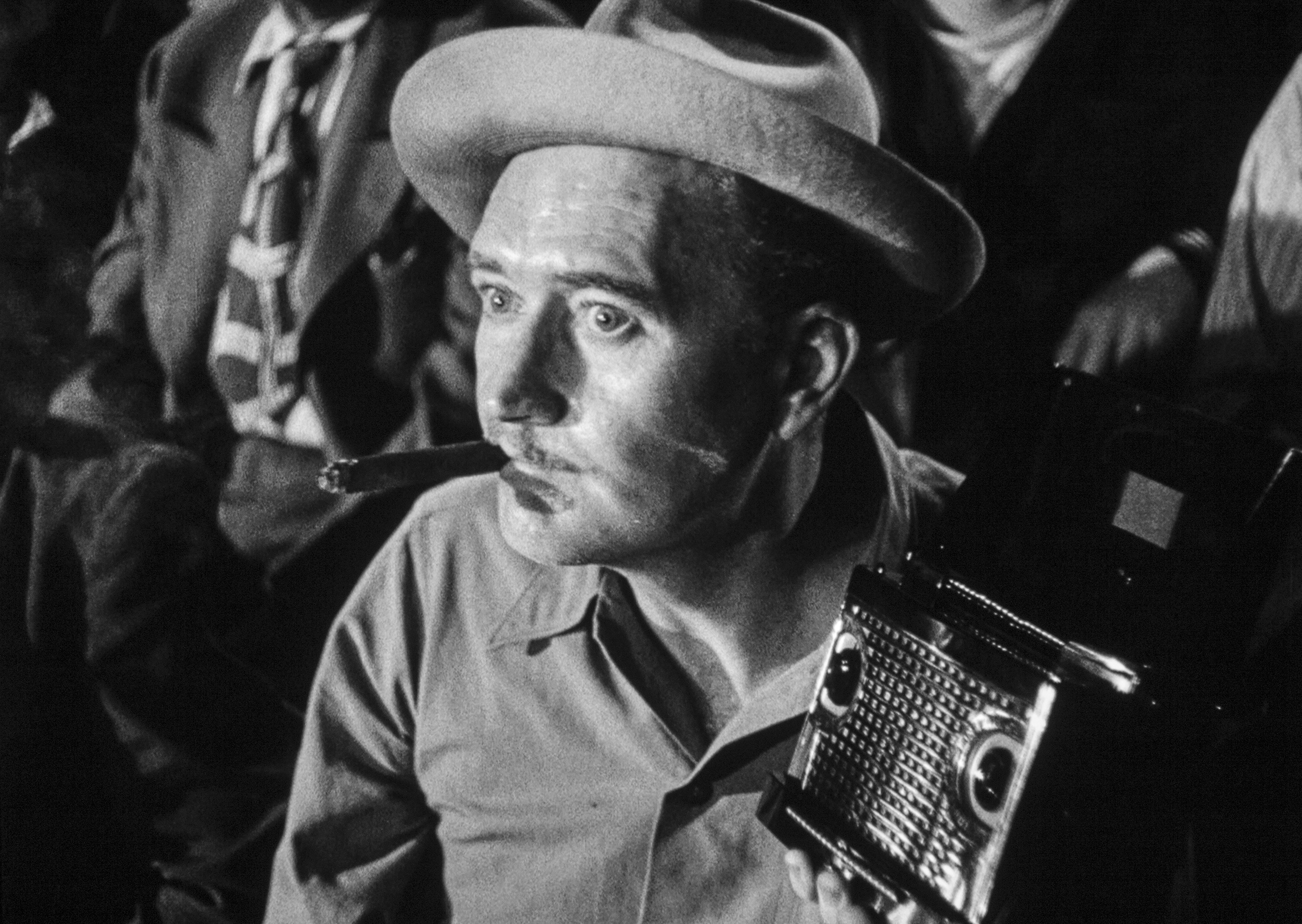 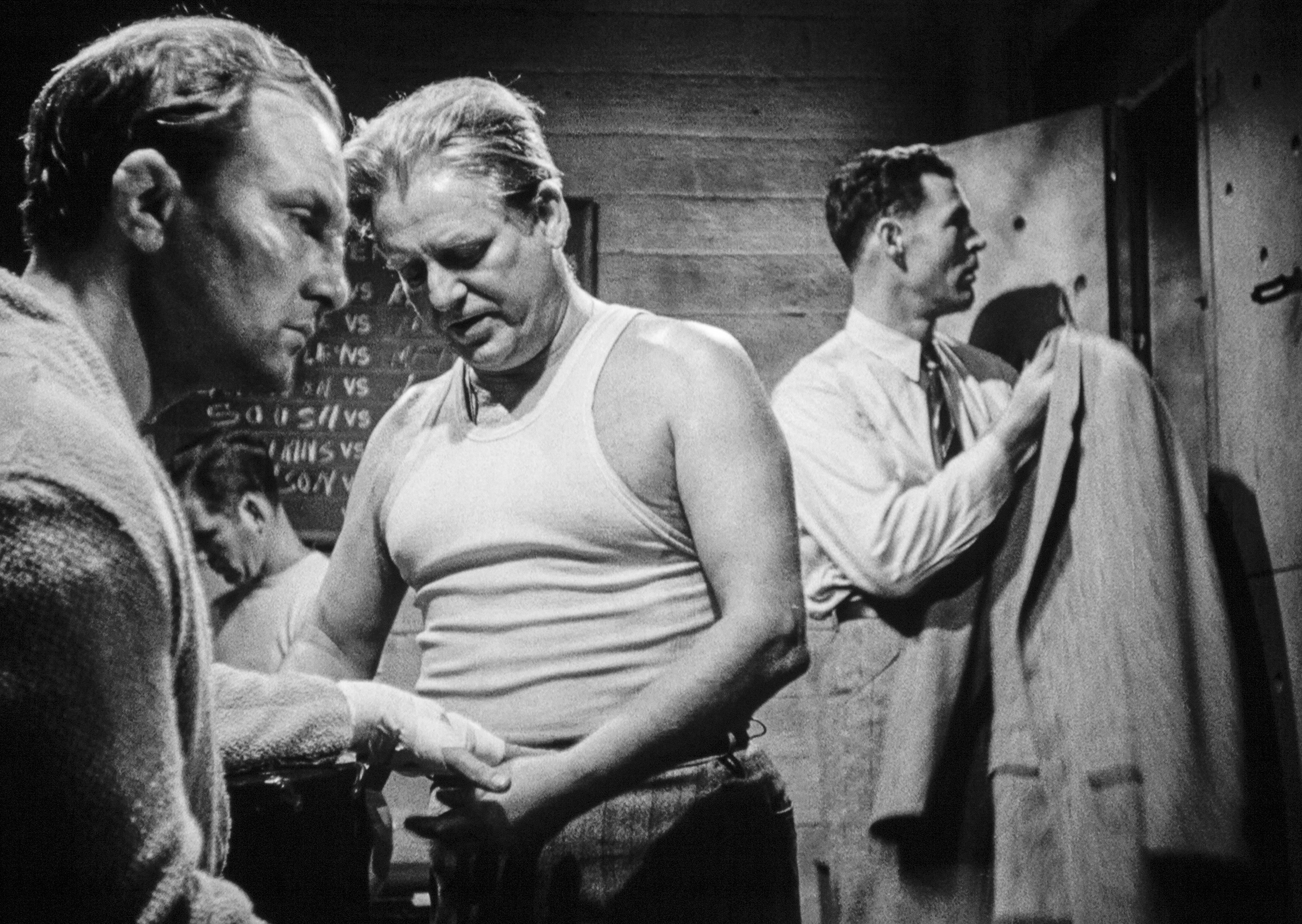 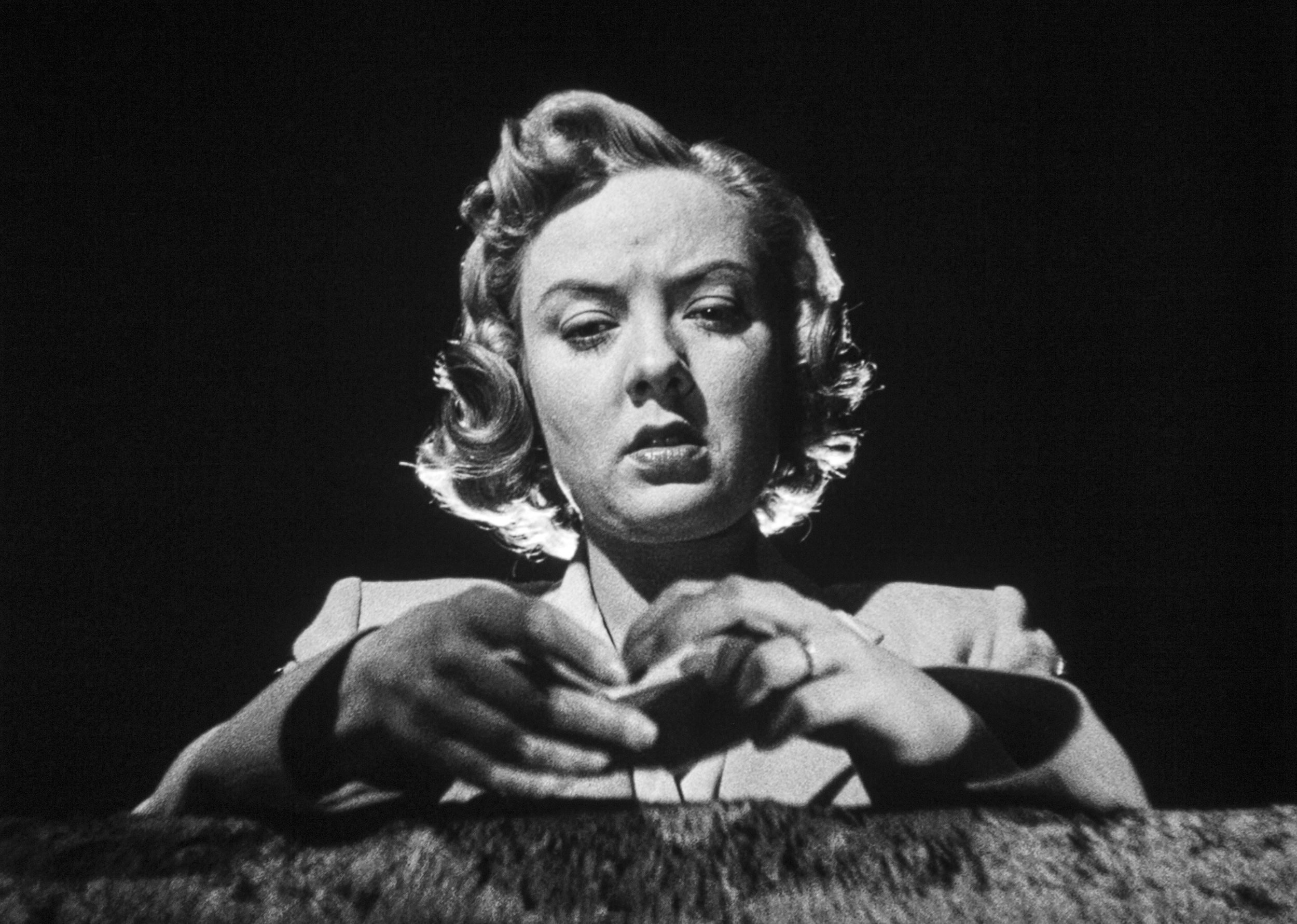 (1-3) Action around the boxing ring. (3) Stoker finally arrives inside the bullpen dressing room. (4) Boxer Gunboat Johnson (David Clarke) is still unconscious from his fight. (5) Julie Thompson decides to take a walk since she's not going to watch Bill's bout. She tears up her ticket and drops it from an overpass.

Wise, who directed more than 40 films, considers “The Set-Up” one of his top 10. He got his start as Orson Welles’ film editor for the masterpiece “Citizen Kane.” Here he captures the different faces as the camera zeros on the action in the ring, intercutting to a blind spectator who has a partner giving him the play-by-play, a couple of women who’ve come to the fights with their boyfriends, a man holding a radio listening to a baseball game while watching the fights, and the mob boss and his entourage looking to cash in with Tiger Nelson.

Wise visited a boxing arena in Long Beach, California, to get the mood and flavor of the night. He spent most of the time in the dressing room watching the fighters coming and going, and how they looked after a fight, win or lose. “As a director, you’ve got to know the subject matter and do all of the research you can.”

By the time Stoker hits the dressing room; his bout has been pushed back after the main event, since the radio broadcast wants the bigger fight earlier in the evening.

Red tells Stoker, “Now, remember stay away from him. Try to slug with him and he’ll murder you.” Stoker keeps looking over his shoulder and finds Julie’s seat is still empty. Tiger’s manager Danny (Edwin Max) tells him, “Remember now, take it easy for two heats. Then you can finish him. That’s the set-up.”

The bell rings and the announcer grabs the microphone.

“Ladies and gentlemen! The next and final bout of the evening, four rounds. In this corner, at 194 pounds, in purple trunks, Stoker Thompson! And in this corner, at 198 and three-quarter pounds in white trunks, that promising young heavyweight from Middletown, Tiger Nelson! — The Ring Caller

(1) Ring caller (Abe Dinovitch) announces the final bout of the evening between Stoker Thompson vs. Tiger Nelson. (2) Danny tells Tiger the set-up is on. (3) Final instruction for the fighters. (4) Mob boss Little Boy (Alan Baxter) and his date for the night.

“Don’t hurt him, Nelson, he’s an old man!” yells someone in the crowd.

Stoker and Nelson come out swinging, but the orchestrated action is too much of a slugfest, with an endless number of punches and very little footwork. With only four rounds, maybe that level of hitting is expected, but it seems over the top compared with the recent action from the successful "Creed" films.

“The Set-Up” was not the only boxing film made in 1949. “Champion” starred Kirk Douglas as Midge Kelly, who got his start as a substitute fighter with no experience in the ring, making $35 if he can survive four rounds. He succeeds, and quickly moves up the ranks for a chance at the title.

But it’s another set-up, with his manager telling Midge he must lose the fight, and he’ll get another chance a year or so down the road. Wise says, "Champion" got more attention and reviews in the U.S., but “The Set-Up" was extremely successful at the Cannes Film Festival in 1949. It won for Best Cinematography, and Wise received the festival’s Grand Prize.

“The Set-Up” features a new 2K master (1.37:1 aspect ratio) more likely from a second-generation print, with excellent gray-scale toning from highlights to shadows and everything in between. The overall sharpness is much better than the previous editions, especially with the numerous facial closes-ups from Wise and Krasner, as the camera captures the ambiance of the smoked-filled arena and the back alley finale, as Julie holds Stoker after a night of violence in and out of the ring. A nice balance of natural film grain holds it all together, as the camera makes one final tracking shot moving away from Julie and Stoker, and then passing the clock at 10:16 p.m.

The original mono track won’t disappoint since it’s been cleaned up of pops and hissing, presented front and center, with subtitles as an option.

"The Set-Up" and "Champion" would make an excellent double-feature for a night of classic film noir photography and gritty storylines from the ring.

(1 -3) The action between Stoker and Tiger. (4) Tiny and Red (Percy Helton) are shocked by how well Stoker is doing against the younger fighter. (5) A bigtime hit from Stoker. (6) The final count. 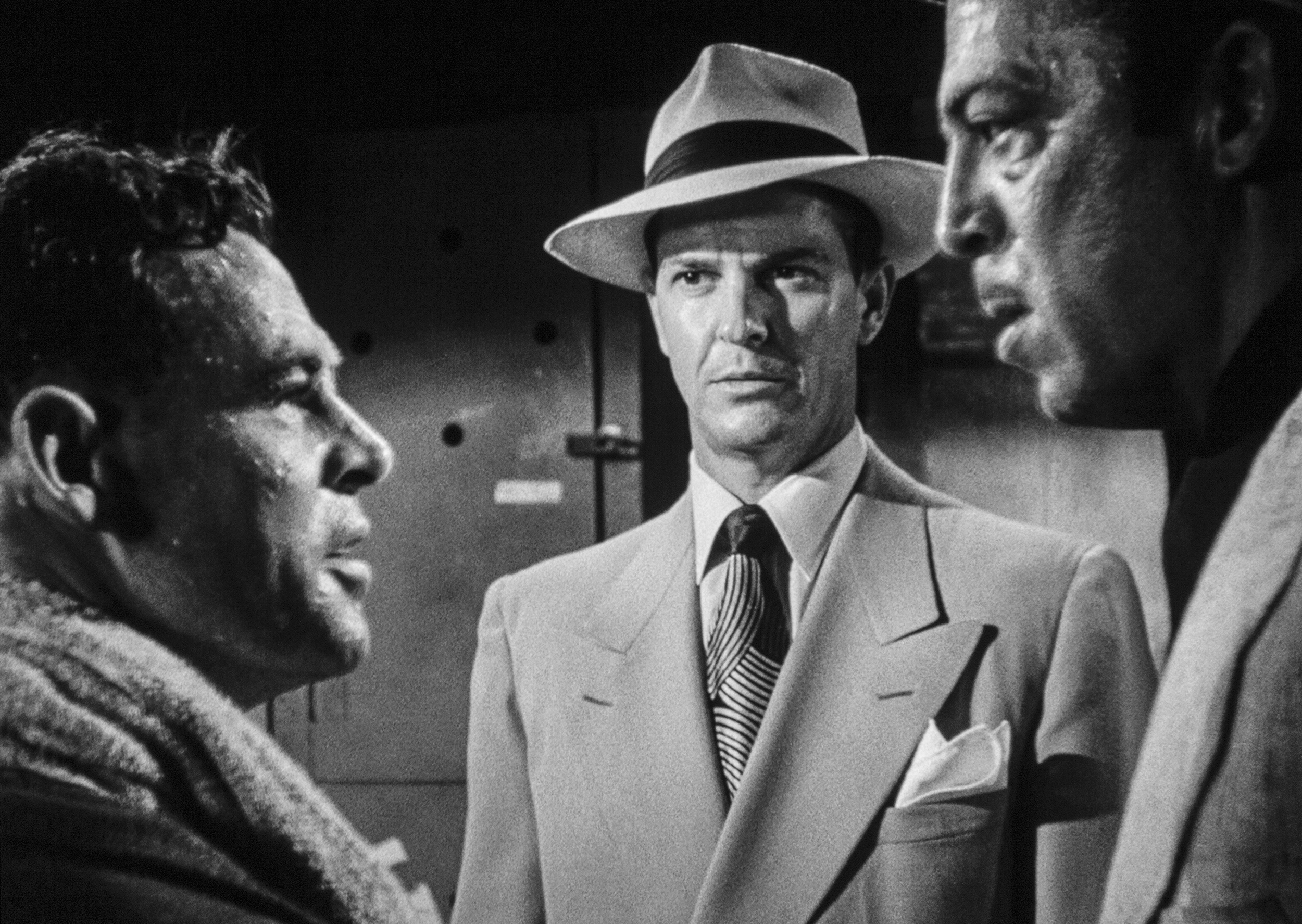 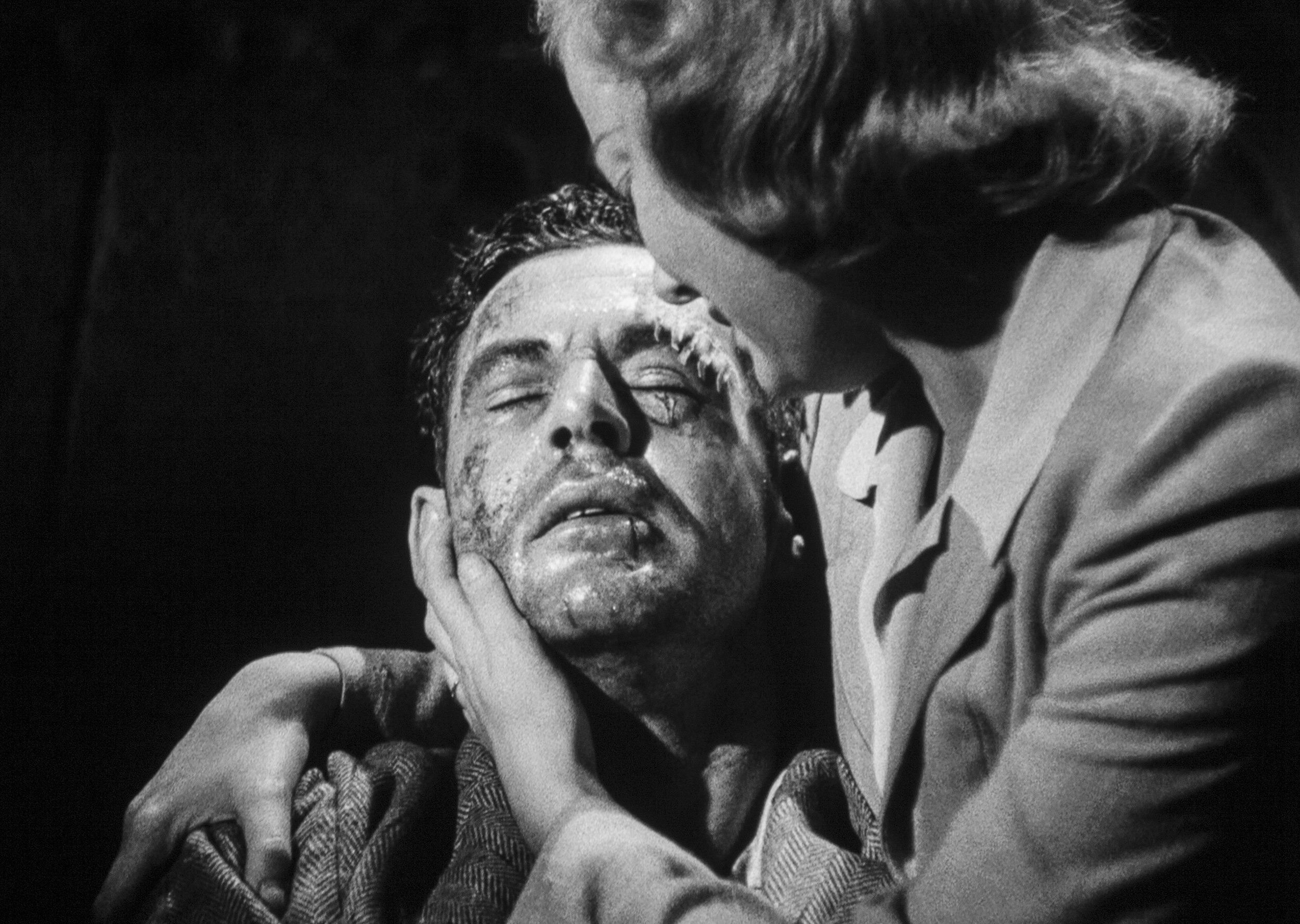 (1) After the fight, Stoker is visited by Little Boy and Danny. (2) Stoker tries to find a way out of the arena to bypass Little Boy and his thugs. (3) Julie comes to her husband's side.