“The Thin Man” gets classy restoration from Warner Archive Collection

Nick and Nora Charles, played by William Powell and Myrna Loy, star in "The Thin Man" adapted from Dashiell Hammett's last novel. Hammett also wrote "The Maltese Falcon," made into the film directed by John Huston starring Humphrey Bogart. His books "The Dain Curse" and "The Glass Key" form the uncredited source material for the Coen Brothers' "Miller's Crossing."

Best extra: Episode of “The Thin Man” TV series, “Scene of the Crime”

THE HIGHBALLS are flying as Nick and Nora Charles set off on their first mystery.

“The Thin Man” is based on the novel by Dashiell Hammett, a WWI veteran and former Pinkerton detective. He invented the hardboiled detective through the characters he created: Sam Spade of “The Maltese Falcon”; the Continental Op of “Red Harvest” and “The Dain Curse”; and Nick and Nora Charles of “The Thin Man,” his last book.

The debonair William Powell of “My Man Godfrey” and “The Great Ziegfeld,” both released in 1936, plays Nick Charles. Gorgeous Myrna Loy of “The Best Years of Our Lives” (1946) and “Mr. Blandings Builds His Dreamhouse” (1948) plays his wife, Nora. Nick is a retired detective married to – possibly – the world’s richest woman, so he has no need to work anymore. They are high society inebriants, drinking like Gatsby’s pals, and living the life of the rich and famous. Based in San Francisco, Nick, Nora, and their dog Asta, travel wherever they want on whatever whim takes them. Mystery and murder always seem to find them, and Nick, retired and bored, jumps in to solve the problem.

(1) Very pretty! The Warner Archive Collection's new 1080p full screen remaster is made from a 4K scan of various negatives. There are some soft spots, but as a whole, the film is clean, sharp and handsome - just like the Charles. (2) The film opens with assorted characters and a victim. Clyde Wynant (Edward Ellis), the real thin man of the story, and his daughter, Dorothy, played by Maureen O'Sullivan, who would become Jane to Johnny Weissmuller's "Tarzan" in a series of MGM films. (3) Dorothy and her fiance Tommy (Henry Wadsworth). (4) Wynant and his scheming ex-wife Mimi (Minna Gombell).

At first Nora encourages him to take on “The Thin Man” case; when it turns deadly, she wants him to stop. But no can do. Oddly, “The Thin Man” actually refers to one of the other characters, missing senior Clyde Wynant (Edward Ellis), but viewers transferred the name to Nick, beginning a series of six “Thin Man” films, and a successful TV series that ran from 1957-1959 starring the Rat Pack’s Peter Lawford and Phyllis Kirk. All hold up well. In fact, Warner Archive has included an episode of the TV series among the extras.

Husband and wife team Albert Hackett and Frances Goodrich of “Seven Brides of Seven Brothers” (1954), “Easter Parade” (1948), and “The Diary of Anne Frank” (1959), wrote the script. For some bizarre reason, the studio had them begin the movie with its victim and collection of suspects instead of Nick and Nora, who are taking the Christmas holidays in New York City. It’s confusing, but stick with it. The emphasis is on snappy dialogue, much of which has been repeated in movies and TV since then, but started here.

“Hey, would you mind putting that gun away? My wife doesn’t care, but I’m a very timid fellow.” — Nick Charles 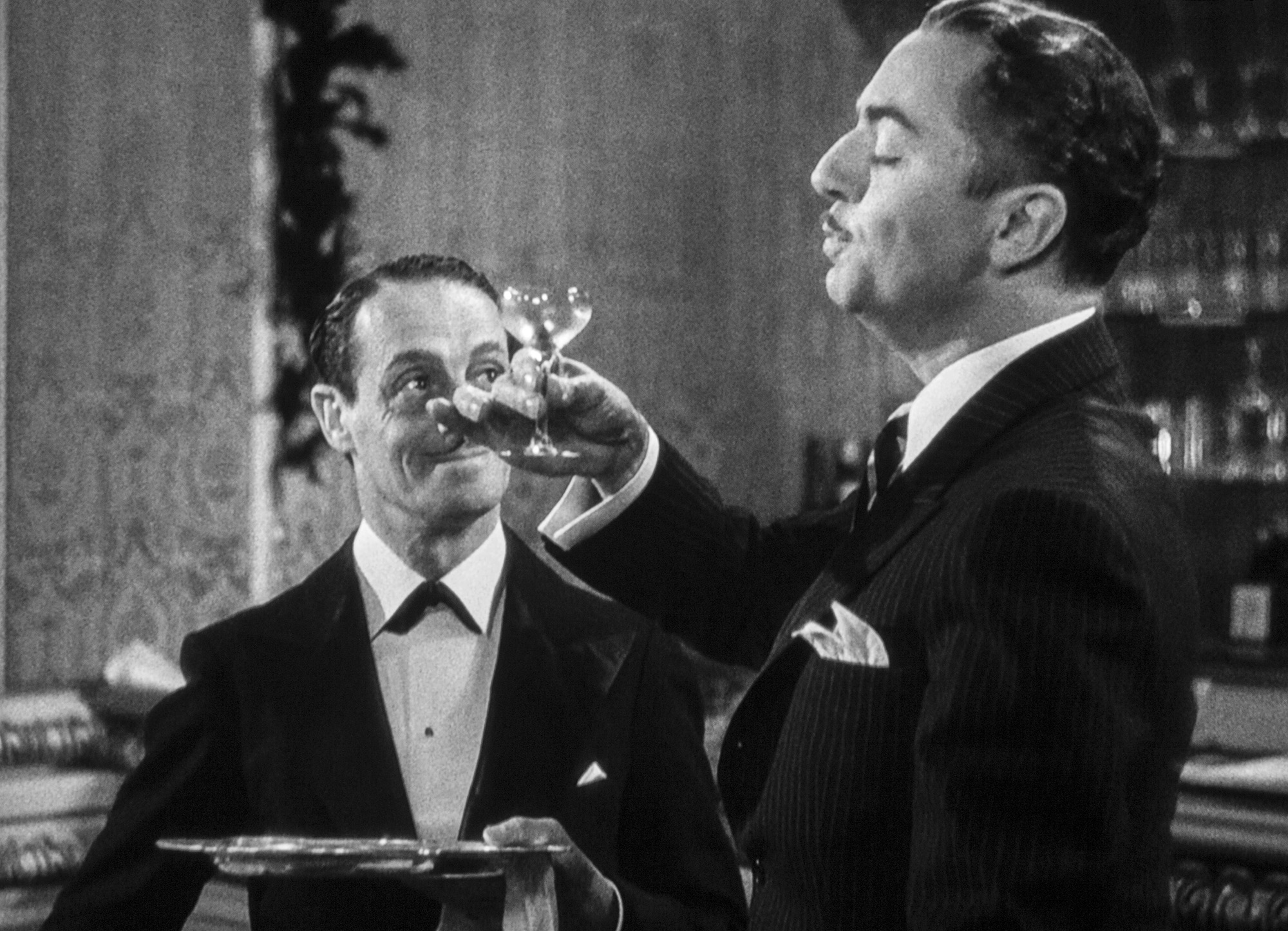 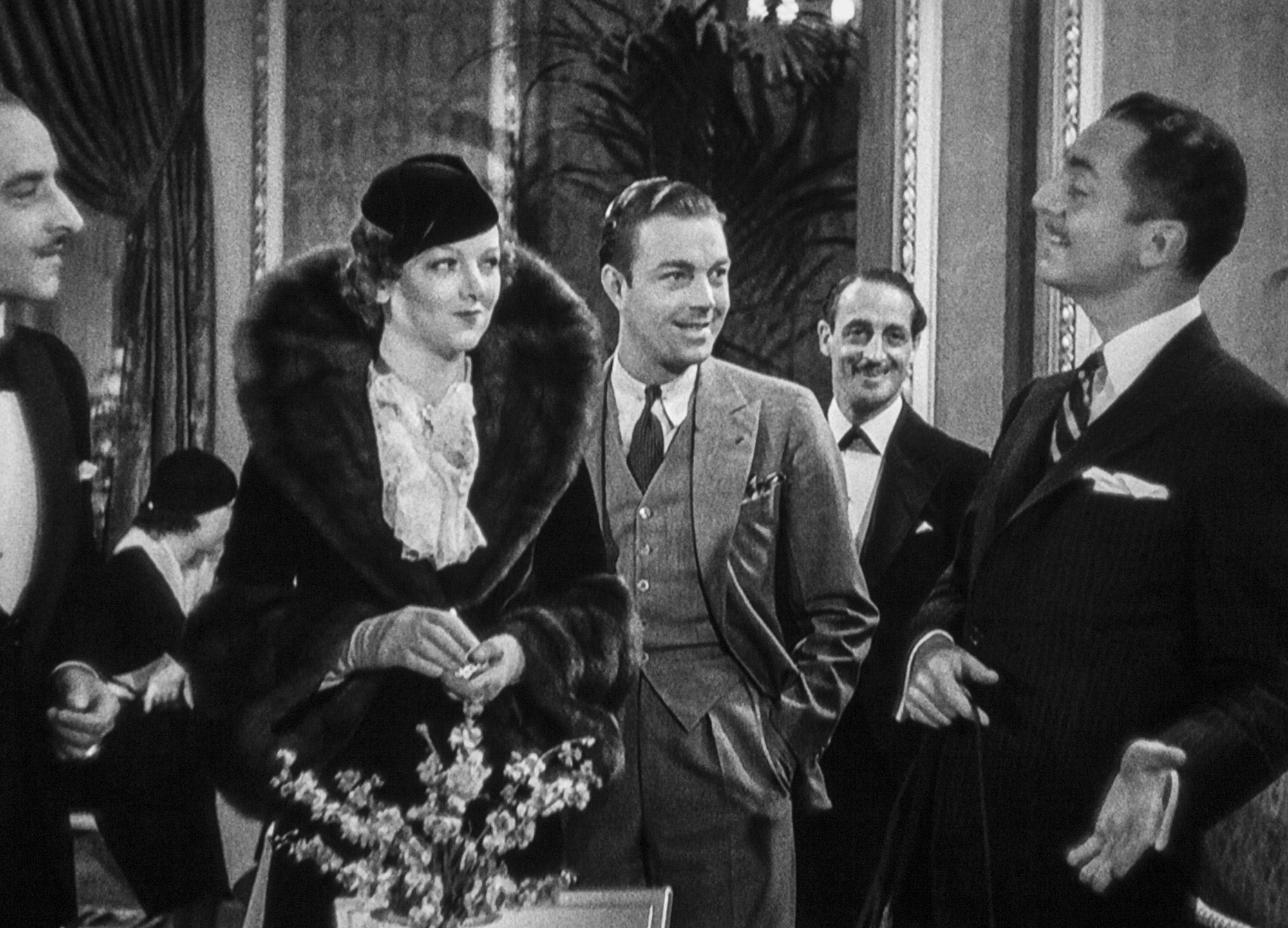 (1) Nick Charles demonstrates how to make the perfect martini: "The important thing is the rhythm. Always have rhythm in your shaking." (2) Nick welcomes Nora to the cocktail lounge. The Charles are spending Christmas in New York City. Some of the frames look soft when frayed negative sources are used, but was the best possible find for Warner's remaster.

(1 & 2) Nora decorates their Christmas tree with Asta (Wire Fox Terrier), while wearing an ice pack after a night of heavy drinking with Nick and friends. (3 & 4) The plot thickens as Mimi tries to get more of her missing husband's money.

Nick is initially engaged to find Wynant, who’s gone missing. He becomes more involved when the old man’s former secretary and lover is found murdered. Evidence points to Wynant, but his daughter, played by Maureen O’Sullivan, won’t believe he’s guilty. The reveal comes during a lavish dinner party, where the Charles invite all the suspects. It’s a device used by many including Agatha Christie, but there’s more here than “the butler did it.”

Here’s another prime restoration from the Warner Archive Collection. “The Thin Man” has long been available on TV, cable, DVD and streaming. However, the new 1080p remaster (1.37:1 aspect ratio, full screen) puts them all to shame. It was made from a 4K scan of various negatives. The picture is clean, with marks and scratches removed. The black and white picture looks great, with deep blacks, white highlights and distinct gradations in between. Contrast is also good, providing nice detail throughout. Film grain does not overwhelm and is consistent.  Costumes, sets and props look superb. Nora Charles is always dressed beautifully in satins, lace and various fabrics. There’s always something to see from vintage locations and classic cars to swanky cocktail parties and dinner tables.

“The last martini. How ‘bout a pick-me-up?” — Nick Charles

Nora and Nick discuss the case. "[They were the] first on screen Hollywood couple for whom matrimony did not signal the end of sex, romance and adventure." – Film historian Andrew Sarris

Sound is delivered through a DTS-HD Master Audio 2.0 soundtrack restored from the original mono. Subtitles are available, but you won’t need them. Dialogue is crisp and clear, while ambient and special effects are nicely separated. Atmosphere surrounds the room.

“If that knife’s missing, I’ll look for it in your back.” — Nora Charles

Sadly, there are no documentaries with comments from film historians. It seems odd since other Warner Archive classics have them, and “The Thin Man” is so popular. As noted, we get an episode of "The Thin Man" TV series, “Scene of the Crime,” broadcast October 24, 1958. It’s entertaining, and so is the Lux Radio Theater Radio Broadcast, which originally aired June 8, 1936. The original trailer lets us see the difference between the old and restored versions of the film.

“I’m a hero. I was shot twice in the Tribune.” — Nick Charles

“I read where you were shot 5 times in the tabloids.” — Nora Charles

“It’s not true. He didn’t come anywhere near my tabloids.” — Nick Charles

Warner’s Blu-ray disc is the best way to see “The Thin Man” now, since streaming sites have not yet caught up with the new transfer. Directed by W.S. “One-take-Woody” Van Dyke, “The Thin Man” delivers beaucoups enjoyment, a mix of comedy, mystery and charm. Chemistry between William Powell and Myrna Loy kept the film series going. It’s easy to see why in their debut film as Nick and Nora Charles. Open the champagne and have a look!

The late Julia's former flame Morelli (Edward Brophy) gets the drop on Nick and Nora. "I didn't knock Julia off!" he protests.

The plot thickens ... shots are fired!

And all is revealed at the Charles' dinner party, where all the suspects are gathered ...

Leaving Nick and Nora ready to head back to San Francisco after the fireworks.