(Click on an image to scroll through the larger versions)

STEVEN SPIELBERG’S “The Post” delivered a salute to the press on Christmas Day 2017. It was released in only a handful of theaters. I was at one of them: The ArcLight on Sunset Boulevard in Hollywood.

Seated in the theater with my wife and possibly some Hollywood insiders, we watched the story unfold. “The Post,” nominated for Best Picture, is based on one of the nation’s most groundbreaking events – the Washington Post’s efforts to publish articles on a government cover-up spanning three decades and four U.S. presidents about the Vietnam War.

The ArcLight is not your average multiplex. It’s pricey, with all of the seats reserved. There are no commercials and only two trailers per film. More importantly, there are no distractions – like an EXIT sign placed too close to the screen bleeding its red glow onto the picture. That’s how I watched “Star Wars: The Last Jedi” the night before at an upscale theater in Orange County. 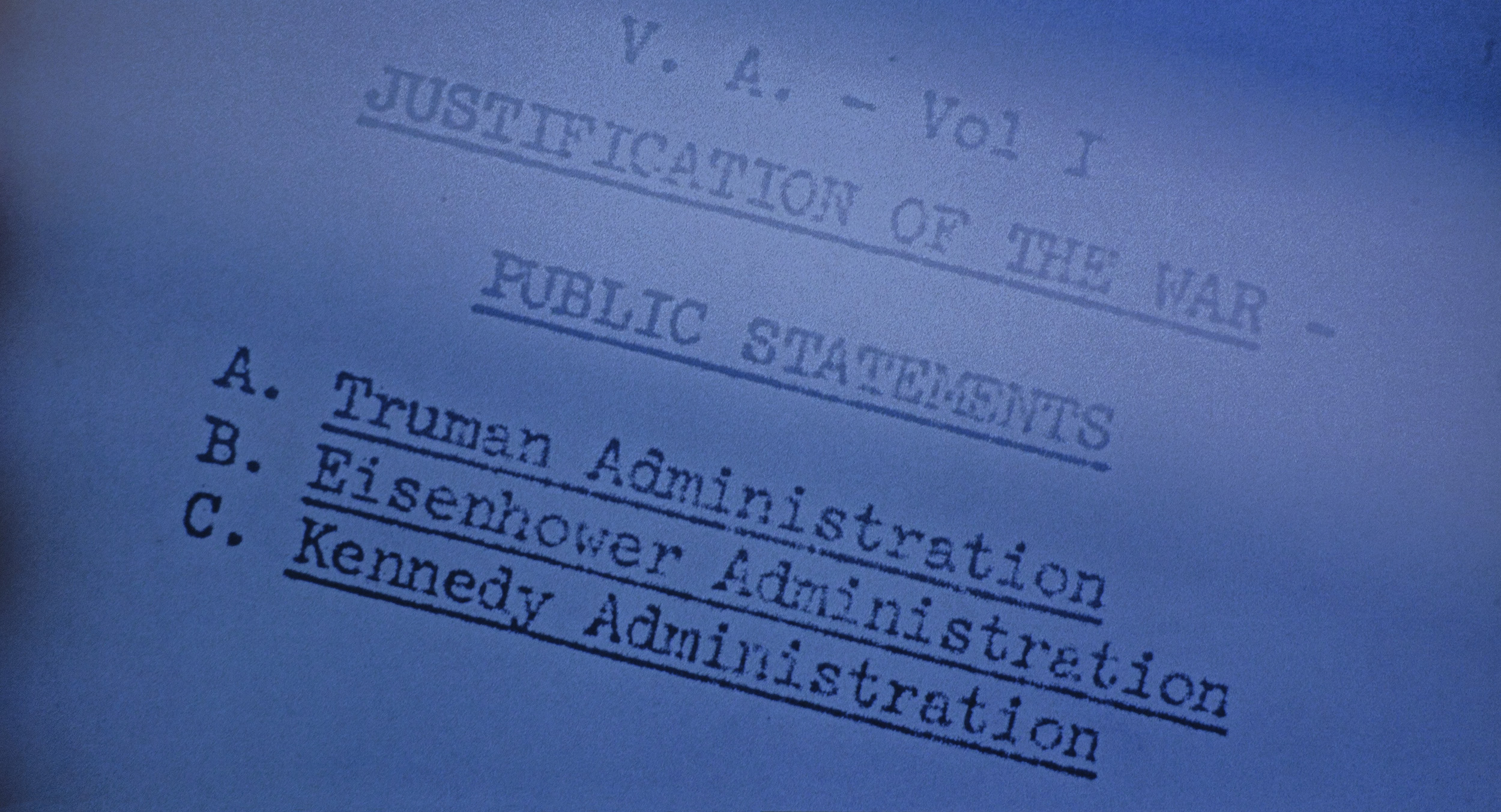 (1&2) "The Post" opens with a night raid in Vietnam as Rand Corp. researcher Daniel Ellsberg (Matthew Rhys) observes the combat. Ellsberg gives Secretary of Defense Robert McNamara (Bruce Greenwood) his impressions of the war efforts during a flight back to Washington D.C. (3) Secretary McNamara tells the media false information about the success of the American war effort in Vietnam. (4&5) Ellsberg starts photocopying the 7,000 pages of the top-secret Pentagon Papers.

When the lights dimmed and the crowd quieted, the screen lit up in a wave of natural film grain as “The Post” rolled out from the 4K projector.

The experience was flawless.

So, when “The Post” 4K disc arrived from 20th Century Fox, I determined it would be a face-off against one of Hollywood’s best theaters. My own theater room is very similar; no visual distractions within eyes view of the nine-foot screen against a black wall and ceiling, and front row seating at 11.6 feet away.

Right off the bat, the 4K presentation was full of depth, razor-sharp detail, and eight-channels of uncompressed DTS-HD sound, equaling and in many scenes surpassing the ArcLight watch. All that was missing was several hundred fellow moviegoers to make the experience a community event.

The 4K-reference-quality starts with Mr. Spielberg’s commitment to the highest level of cinema. As a traditionalist, he shot the majority of his films on 35mm film stock, which extracts nearly 6K resolution. Only the animated “The Adventures of Tintin” and FX heavyweights “The BFG” and “Ready Player One” were captured digitally. He also demands 4K mastering when possible; classics “Close Encounters of the Third Kind” and “E.T. the Extra-Terrestrial” are marvelous 4K examples on disc and digital.

(1) Katharine Graham is schooled by Fritz Beebe before the next board meeting, which will determine the Washington Post Co. stock value before going public on the American Stock Exchange. (2) Graham meets editor Ben Bradlee at a D.C. restaurant for breakfast. (3) Bradlee notices New York Times reporter Neil Sheehan hasn't had a published story in three months, which leads Bradlee to believe that Sheehan is working on something special. (4) Graham is disappointed with herself since she couldn't get the words out during the board meeting, which involved a $3 million less value in the company.

“The Post” received top-tier treatment scanning the camera negative (1.85:1 aspect ratio) at 4K. The brief opening scene, a nighttime jungle battle in Vietnam, has subdued color, with a deep HDR black level showing rain and its splatter making highlights. (It was filmed in a forest outside of New York City.) U.S. forces receive heavy casualties as Intelligence Analyst Daniel Ellsberg (Matthew Rhys), a former Marine, watches the ambush and begins typing a report.

Spielberg and cinematographer Janusz Kaminski, who's been at his side since “Schindler’s List,” uses a wide-angle perspective throughout to wrap lead characters publisher Katharine “Kay” Graham (Meryl Streep, nominated for Best Actress) and editor Ben Bradlee (Tom Hanks) within the frame of a newspaper environment. Visually, it’s similar to John Frankenheimer’s political thrillers of the 1960s, “The Manchurian Candidate” and “Seven Days in May.” Spielberg and Kaminski also use wide-angle photography and handheld camera work, minus the black and white film stock.

The 4K and Blu-ray are both mastered with precision, with the 4K exhibiting a finer level of sharpness with millions of more pixels per frame, and extracting the natural film grain with clarity. The deliberately cool color palette and desaturated look are effectively rendered and toned with HDR.

I was a little surprised there’s no Atmos or DTS:X soundtrack for height speakers, even though “The Post” is clearly heavy on dialogue. Spielberg and composer John Williams have worked together for 44 years. The five-time Oscar winner provides a reserved, atmospheric score. It’s mostly strings, French horns, and two beautiful piano solos, with a rare use of underlying electronic beats to build suspense. The battle sequence creates the most active sound effects.

(1) Bradlee sends an intern to the New York Times building to find anything on reporter Neil Sheehan. On the elevator, the intern gets a peek of the front page mockup, which had Sheehan's name blocked out for a good portion of the top of the page. (2) The Post reporters read Sheehan's first story based on the Pentagon Papers. (3) Post reporter Ben Bagdikian (Bob Odenkirk) also worked at the Rand Corp. and starts his search for Daniel Ellsberg and the Pentagon Papers. (4) Graham addresses The Post board during its first day on the American Stock Exchange. (5) The Post staff watch CBS anchor Walter Cronkite report that a U.S. District Court had set a temporary restraining order against further publication of the classified material from the Pentagon Papers.

There are over 70 minutes of in-depth featurettes highlighting historical perspective, cast, and character, re-creating the ‘70s, filming “The Post,” and John Williams’ score.

“‘The Post’ is as much about leadership, as it is about the birth of a national newspaper, once a local paper called The Washington Post,” Spielberg says in the first featurette, “Layout.”

Producer Kristie Macosko Krieger considers the film a woman’s story, with Katharine “Kay” Graham “finding her voice” as she transforms from a housewife and mother to a powerful leader. Graham was the first woman to head a Fortune 500 company.

Bonus features provide context to Graham becoming a publisher. She grew up as the daughter of a very successful businessman in a “somewhat sheltered … privileged environment,” former Post managing editor Steve Coll says. Her father, Eugene Meyer, bought the newspaper in 1933 at a bankruptcy sale. Eventually, she married Philip Graham, a lawyer out of Harvard, who took over at her father’s request. Graham operated the newspaper for 17 years until he committed suicide in 1963.

At age 45, Kay Graham was forced to take over. “Everyone expected she would sell the newspaper because women didn’t run businesses of that size,” her son Don Graham recalls. “I think that would be pretty daunting for anybody,” says daughter Lally Graham Weymouth, a senior associate editor at The Post. Self-doubting at first, Kay Graham was very tenacious and smart, her son says.

Graham hired Ben Bradlee as editor in 1965, and he was everything she wasn’t. He was brash and charming, “A newspaperman through and through,” says actor Tom Hanks, who played Bradlee. “He loved the business and loved the job – to find the truth, discern what it is, and put it out, then let people decide for themselves.”

Their relationship was extraordinary Spielberg says.

(1) Ellsberg meets Post reporter Bagdikian at a motel in Boston, where he's got the Pentagon Papers stashed. (2) Bagdikian returns to Bradlee's home with the top-secret papers. (3) The editor's living room becomes mini-newsroom, as The Post attorney suggests they not publish their first installment. (4) Katharine Graham says, "Let's publish," knowing it could jeopardize the paper's finances going forward.

The extras also explore how the project fell into Spielberg’s lap, while in the middle of filming “Ready Player One.” He had no intention of exploring any new project until the futuristic tale was in the theaters. He purposely avoided reading Liz Hannah’s script for weeks complaining, “I didn’t need the temptation.” Spielberg caved in and, after a weekend read, saying, “Oh, I’m doomed.”

Hannah had read Graham’s memoir and admits she became obsessed. “I kept thinking of her and thinking about, ‘What is this movie?’” she says in “Stop the Presses.” Not until she read Bradlee’s memoir did she realize the story was about the two of them and how they decided to publish the Pentagon Papers.

“It was the moment in her life where she chose to be the person she was gonna be” - Liz Hannah, screenwriter

“The Post” is classic Spielberg, nicely crafted with controlled cinematic flare showing how The Washington Post published the first article sourced from 4,000-plus pages provided by Daniel Ellsberg on the war no one in government felt could be won.

This American story should be required viewing for every student and adult no matter the format. It's too important to ignore.

(1&2) The New York Times and The Washington Post took their case to publish the top-secret papers to the U.S. Supreme Court. The Court's decision was 6 to 3, in favor of the newspapers. (3) Graham tells Bradlee after the decision, "You know what my husband said about the news? He called it the first rough draft of history. That's good, isn't it?"

"The founding fathers gave the free press the protection it must have to fulfill its essential role in our democracy. The press was to serve the governed, not the governors." - Justice Hugo Black - New York Times Co. vs. United States

The enchanting “Roman Holiday” has new life with its 4K restoration