Charles Boyer and Jennifer Jones star as Adam Belinski and Cluny Brown in the last film directed by Ernst Lubitsch. Belinski accepts Cluny's independent nature: "In Hyde Park, for instance, some people like to feed nuts to the squirrels. But if it makes you happy to feed squirrels to the nuts, who am I to say, 'nuts to the squirrels'?"

Best extra: “Squirrels to the Nuts” with critics Molly Haskell and Farran Smith

It’s a Sunday afternoon in 1938 and Mr. Hilary Ames (Reginald Gardiner) is upset. He’s about to give a party in his London apartment, but his kitchen sink is stopped up and ready to overflow. The plumber has not arrived, although a newcomer, Adam Belinski played by the ever-debonair Charles Boyer, pops through the door. He’s there to see a friend who he discovers is subletting to Ames.

Then the pretty and offbeat plumber’s niece arrives, Cluny Brown, with her Uncle Arn’s (Billy Bevan) tools. Played by dark-eyed, raven-tressed Jennifer Jones, Cluny is ready to drain that sink herself! “Good afternoon,” she begins. “Shall we have a go at it?”

Ames is taken aback. He doesn’t know what to say; women are not plumbers in pre-WWII England or anywhere else. But Belinski speaks up for her: “My dear, Ames … where’s the gypsy in you? Where’s your sense of adventure? Are you the type of man who puts on his pants before he answers the telephone?”

So Cluny takes wrench and pipe in hand, after hiking up her houndstooth skirt and pulling down her stockings. Saucy innuendo permeates the script by Samuel Hoffenstein and Elizabeth Reinhardt, who also wrote the classic film noir “Laura” (1944). Cluny opens the pipes with a few hearty whacks. To celebrate she enjoys her “first martini cocktail” with the men, and becomes properly and sensuously slogged. “I feel lovely … It’s coming over me, that Persian cat feeling,” she purrs falling on Ames’ couch. Her eyelashes should have won an Oscar.

(1) The Criterion Collection delivers a fine 4K scan from a composite 35mm intermediate print. Film grain is excellent; it does not overwhelm. Detail, contrast and depth are outstanding.  (2) “Lubitsch’s women have a range of emotion and intelligence and potential that not every director did in that era. Again and again, these kind of women pop up in his movies.” — Farran Smith Nehme, film critic  (3) Hilary Ames (Reginald Gardiner) calls again about his sink. He's about to give a party and the plumber has yet to appear.  (4) Cluny, armed with her uncle's tools, takes the matter in hand.

German-born comedian turned writer/director Ernst Lubitsch, had a talent for creating memorable characters – especially women. “Cluny Brown” is part romance, part social satire. Uncle Arm arrives to fix the sink and, discovering his niece in Persian-mode, decides then and there she find her “proper place” in domestic service. A contemporary audience might not understand the times and customs of place and manners as well as 1940’s viewers. Just take a crash course with “Downton Abbey” and all will be revealed.

Ever agreeable, Cluny goes to work as a parlor maid at the Friars Carmel country manor, where she has even less luck fitting in. The family’s son, naïve young Andrew Carmel (Peter Lawford) meets Belinski in Londo. He mistakes him for a Czech professor and enemy of Hitler on the run from Nazis. Andrew arranges for the “professor” to take refuge at his parents’ estate where Cluny works. At dinner, she recognizes him and drops the serving platter exclaiming, “Nuts to the squirrels!” Cluny is to be fired, but Belinski’s glib tongue helps her keep her job. She thanks him later. The story has another romantic subplot and more complications, but ends well for all - just as we'd expect.

“How lucky that we met in that flat. I wish I was there right now. I wish I could roll up my sleeves and roll down my stockings and unloosen the joint. Bang, bang, bang!” — Jennifer Jones as Cluny Brown 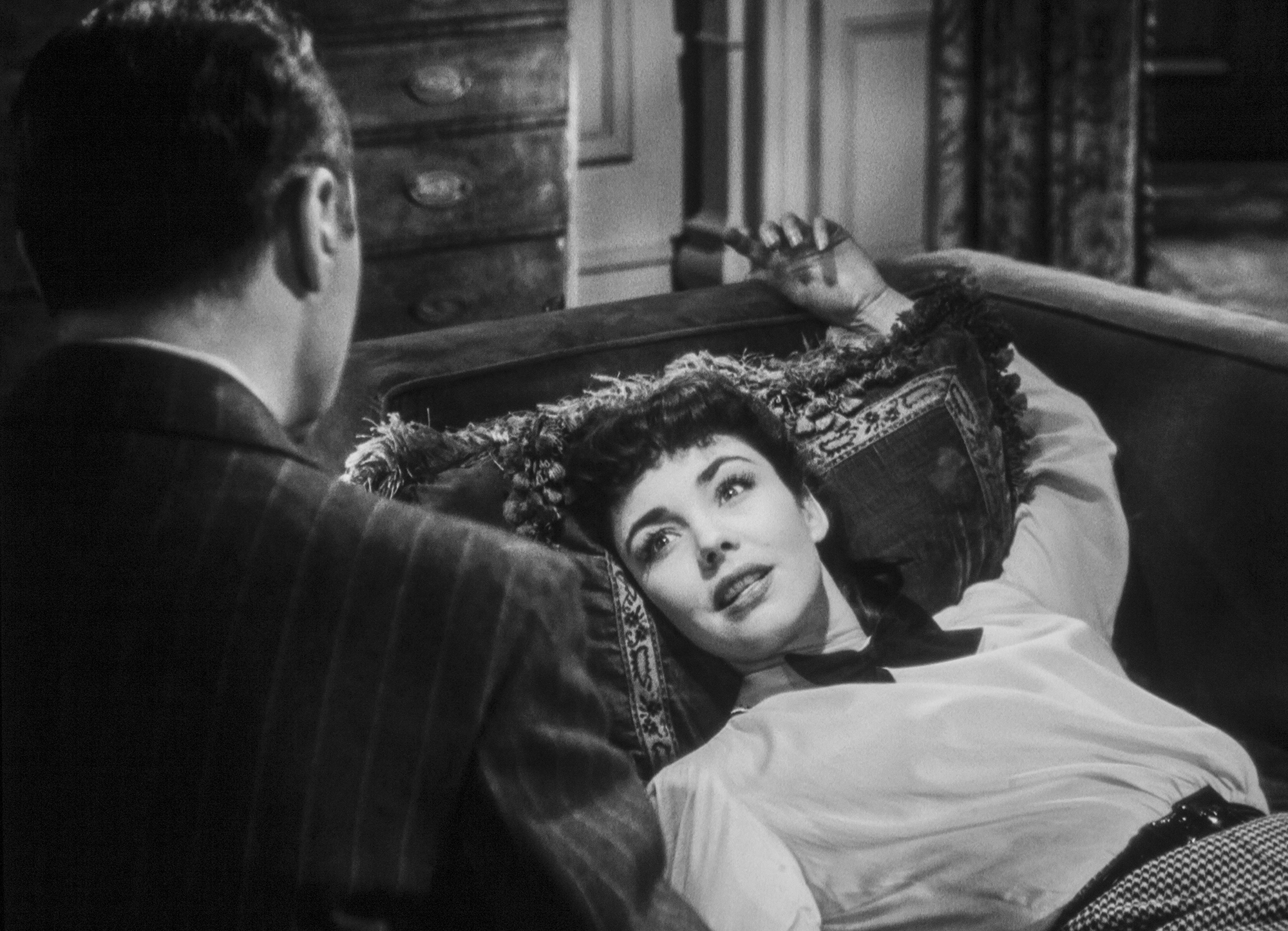 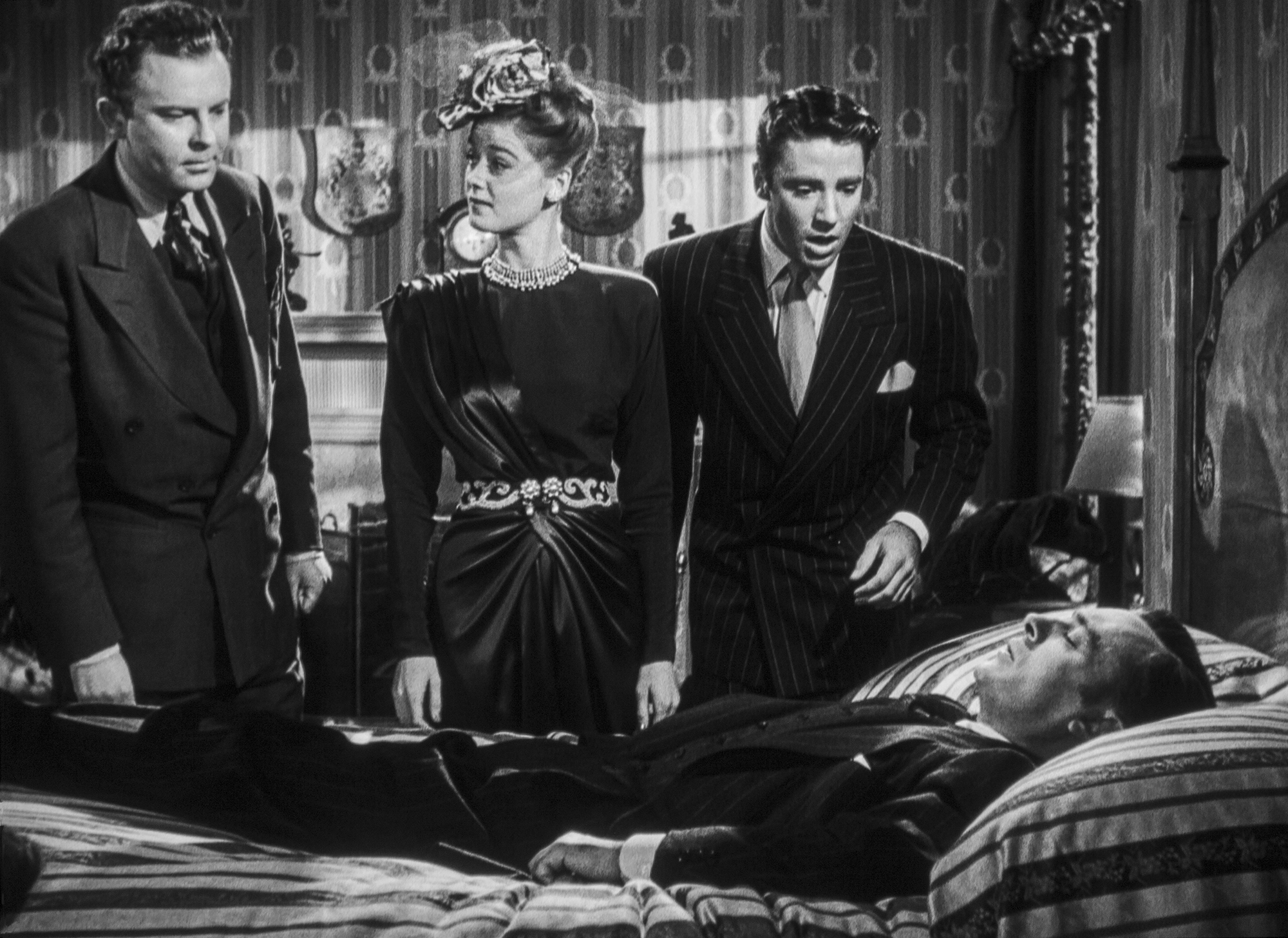 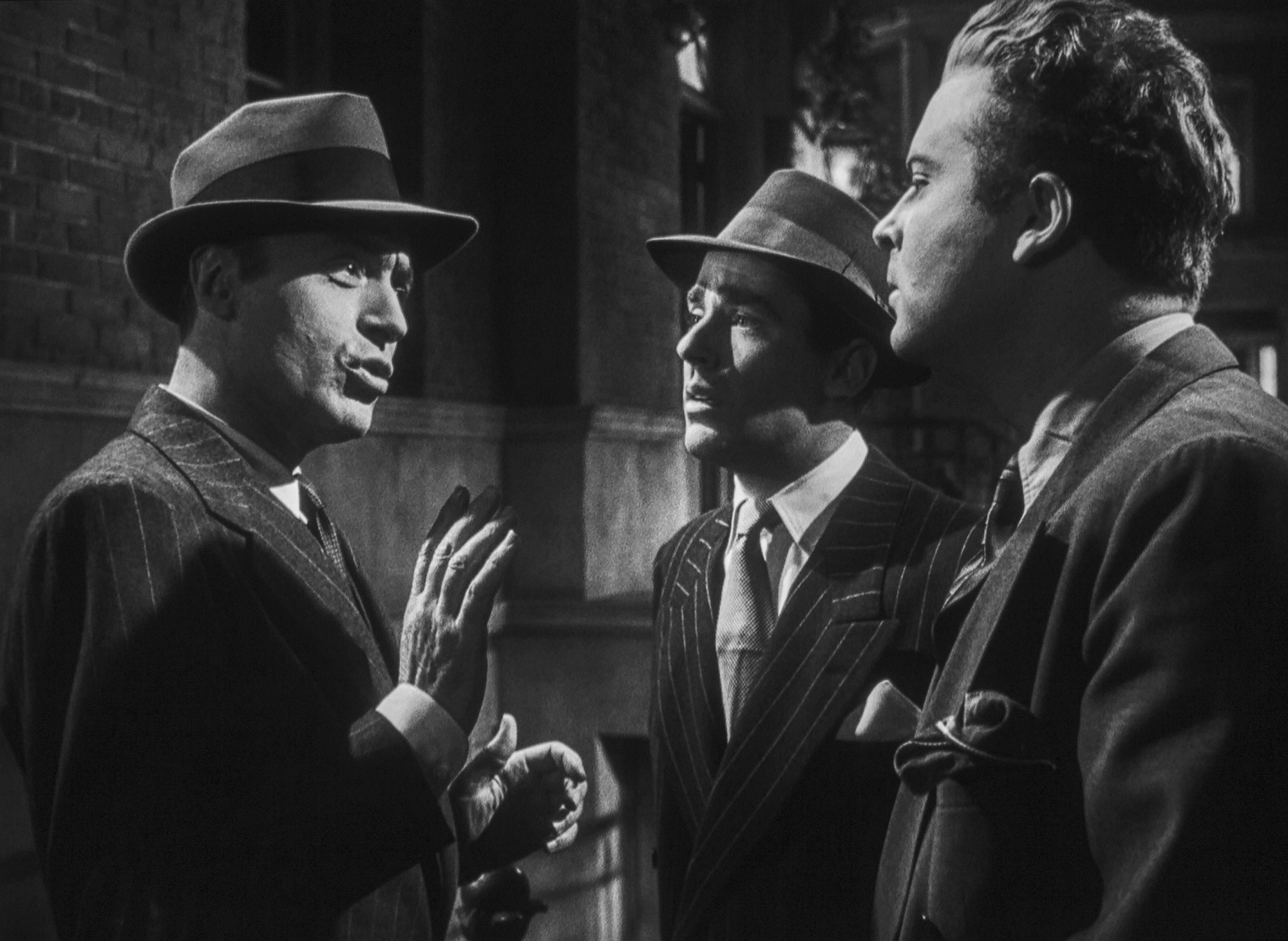 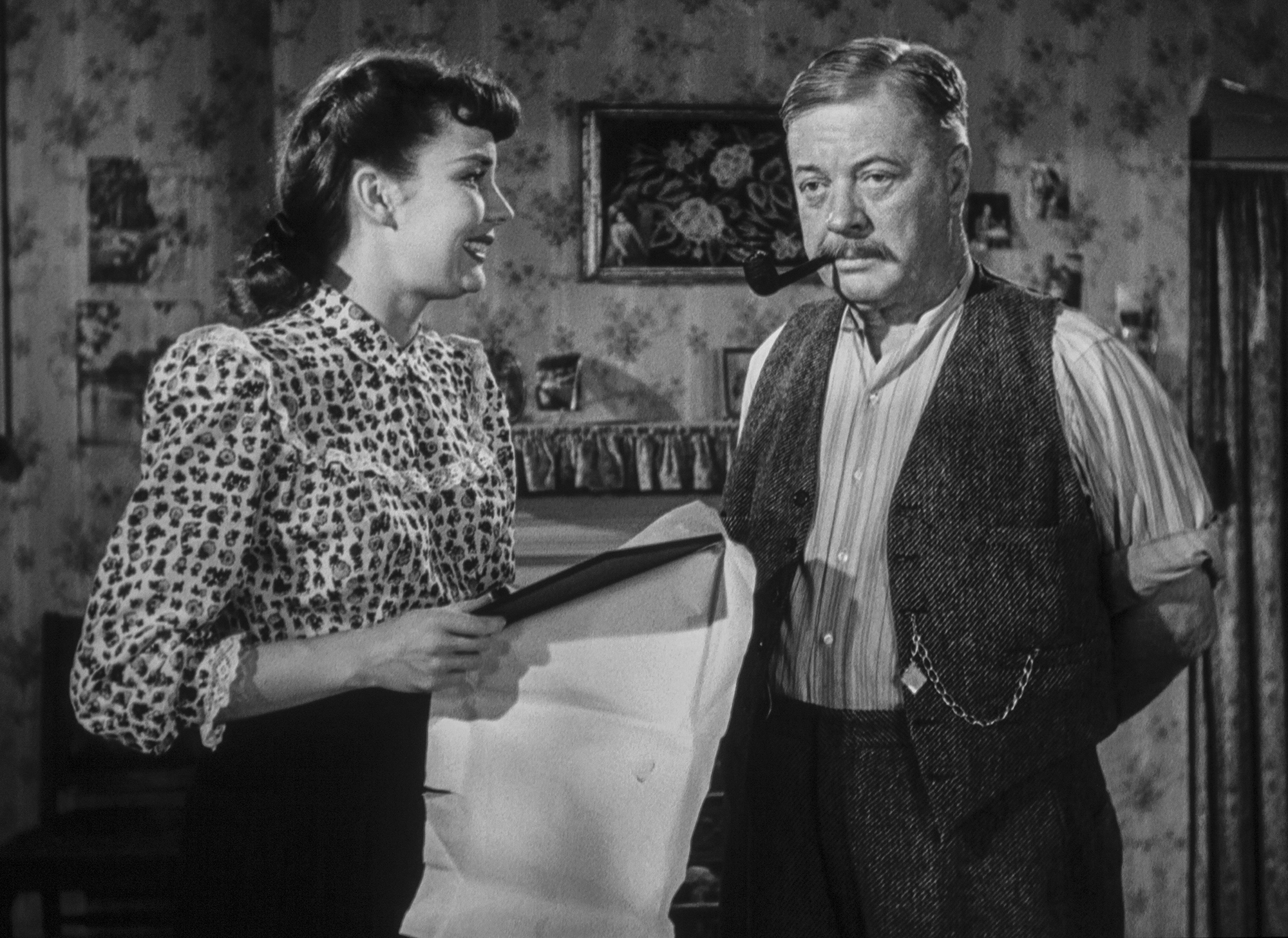 Ernst Lubitsch, who began working in the silent film era, was known for historical films and comedy. He jumped into talkies as a way to make musicals. Once in America, he worked with many of the greats: Greta Garbo, Jimmy Stewart, Mary Pickford, Maurice Chevalier and Jeanette MacDonald. Titles include “The Merry Widow,”1934; “an anti-war drama, “Broken Lullaby” 1932; “Ninotchka,” 1939, co-written by Billy Wilder; “The Shop Around the Corner,” 1940; “Heaven Can Wait,” 1943; and “To Be or Not to Be,” 1942, a black comedy starring Carole Lombard, Jack Benny and Robert Stack about a troupe of actors trapped in Nazi-occupied Warsaw. It was remade in 1983 by Mel Brooks. Lubitsch became a naturalized citizen of the United States in 1936.

“At once elegant and ribald, sophisticated and earthy, urbane and bemused, frivolous yet profound. [Lubitsch films] were directed by a man who was amused by sex rather than frightened of it – and who taught a whole culture to be amused by it as well.” — Michael Wilmington

Once again Criterion meets its standards of excellence with a brilliant 4K master upgrade from a composite 35mm fine-grain intermediate in its original 1.37:1 aspect ratio. There are a few soft spots due to the source material. Otherwise, blacks are solid and highlights sparkle, with fine gray gradations between. One standout is the actors’ complexions captured in Hollywood glamour-style, particularly Jones, Boyer and Lawford. Did anyone ever look as beautiful or handsome in classic black and white?

“Cluny Brown” was an usual outing for Jennifer Jones, best known for her dramatic roles in “Portrait of Jennie” (1948), “The Barretts of Wimpole Street” (1957) and “The Song of Bernadette” (1943) for which she won an Academy Award. Her timing is as brilliant as her beauty. Haskell says “Charles Boyer has never been more appealing or funnier” as the Continental exile, who wonders where his next meal will come from. Farran Smith Nehme, film critic, agrees, “You’re rooting for him the entire time.”

Filmed at the 20th Century Fox Studios in Los Angeles, sets are complex and look authentic. They're filled with detail from Ames’ apartment to the landscapes and super-posh interiors of the Friars Carmel estate. Fox transfer supervisor Barbara Crandall and her team reveal every item. It’s hard to believe this was shot in L.A. instead of London, but that was the magic of cinema in the 1930s to ‘40s. Image stability, depth and contrast are admirable as well. Visuals have been cleaned of dirt, scratches and burns.

The soundtrack was updated to an uncompressed monaural soundtrack. Dialogue and effects are clear, and all pops, clicks, background hiss and other issues have been eliminated. The score is by Cyril Mockridge, who also composed the music for “Miracle on 34th Street” (1947), “The Man Who Shot Liberty Valance” (1962), and many TV series of the 1960s. 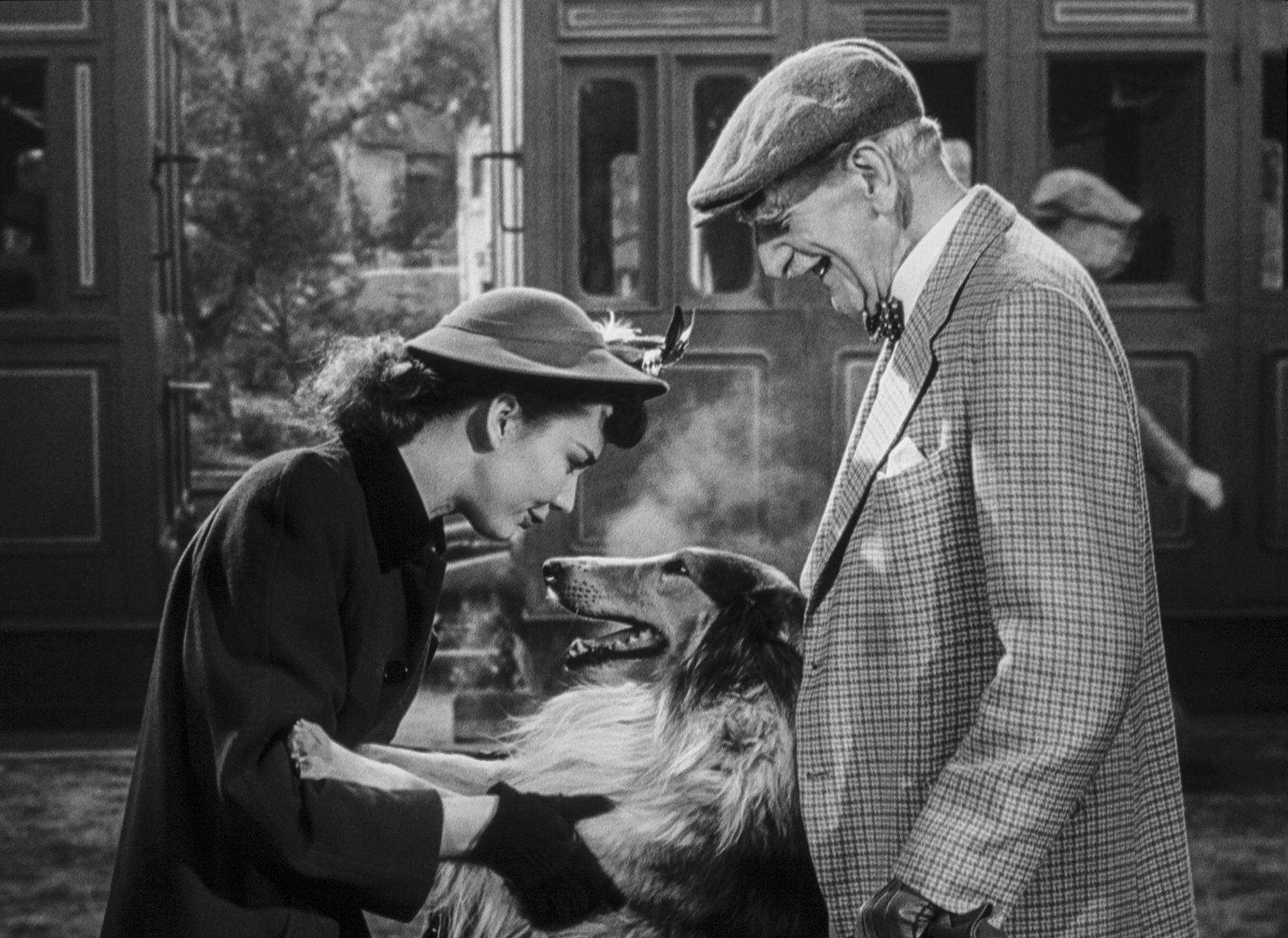 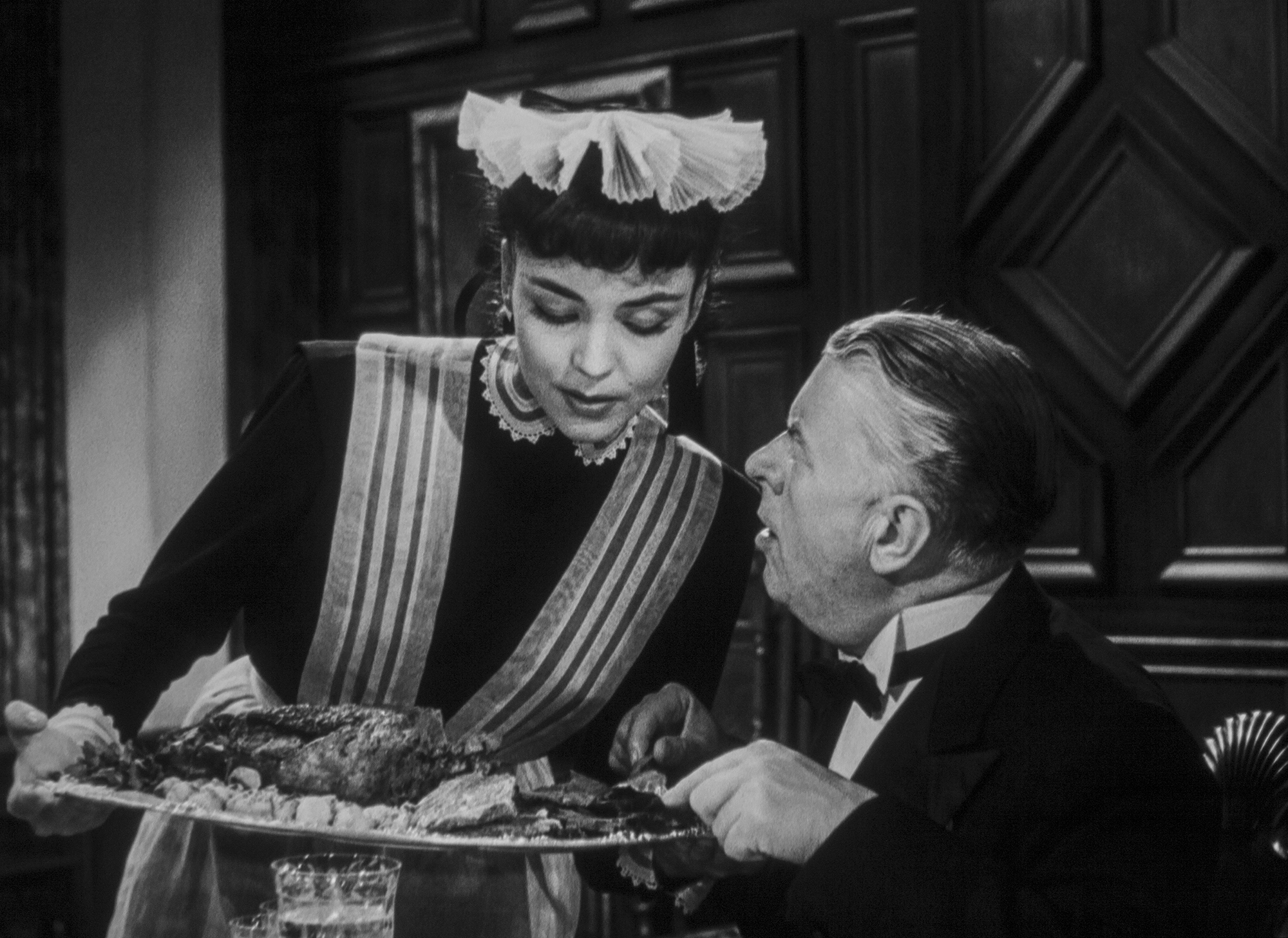 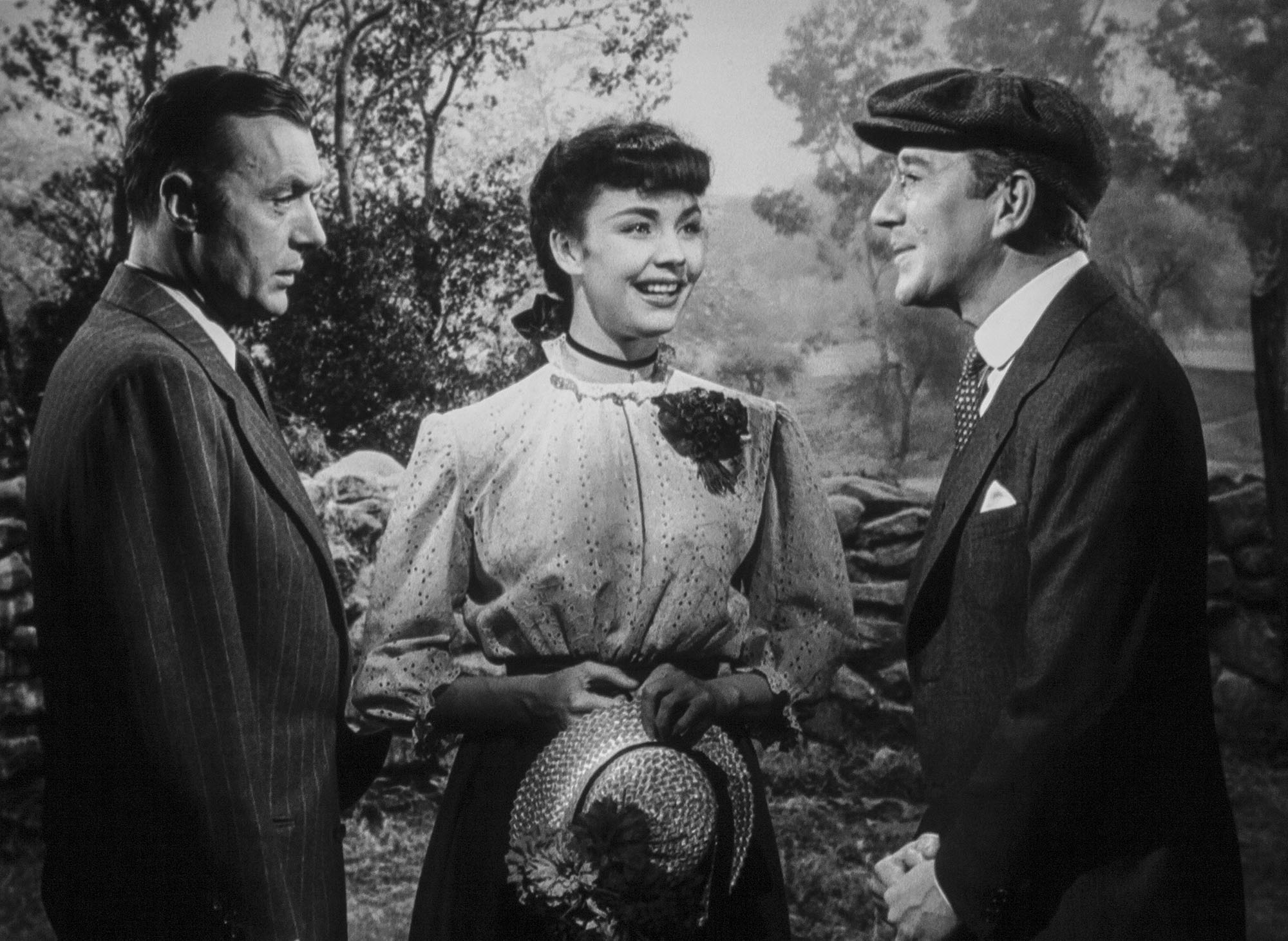 (1) Cluny makes friends everywhere she goes.  (2) Cluny steps out of line again recommending a cut of meat to her new employer. It just isn't done!  (3) Cluny introduces the man she believes will be her fiancé, shopkeeper Jonathan Wilson (Richard Haydn).

Criterion provides five excellent bonus features including an enclosed essay by writer Siri Hustvedt. Critics Molly Haskell and Farran Smith Nehme discuss the female characters found in Lubistch’s films, including “Cluny Brown,” in “Squirrels to the Nuts,” a brand new feature made for this presentation. “Kristin Thompson,” author of “Herr Lubitsch Goes to Hollywood,” discusses his work in a new video essay. Critic Bernard Eisenschitz explains “The Lubitsch Touch” in a 2004 featurette in French with subtitles.

“There was something very sophisticated and worldly that [Lubitsch] brought to Hollywood, very anti-puritanical that characterizes his films … He gets away with things nobody else could do in the ‘40s.” — Molly Haskell, film critic

Sadly, the director died before making another movie. Unlike Lubitsch’s other films, “Cluny Brown” was not a success when it first premiered. It has grown in popularity through the decades, becoming an audience favorite. It’s heart, wit and celebration of the independent spirit makes it a story to enjoy again and again. 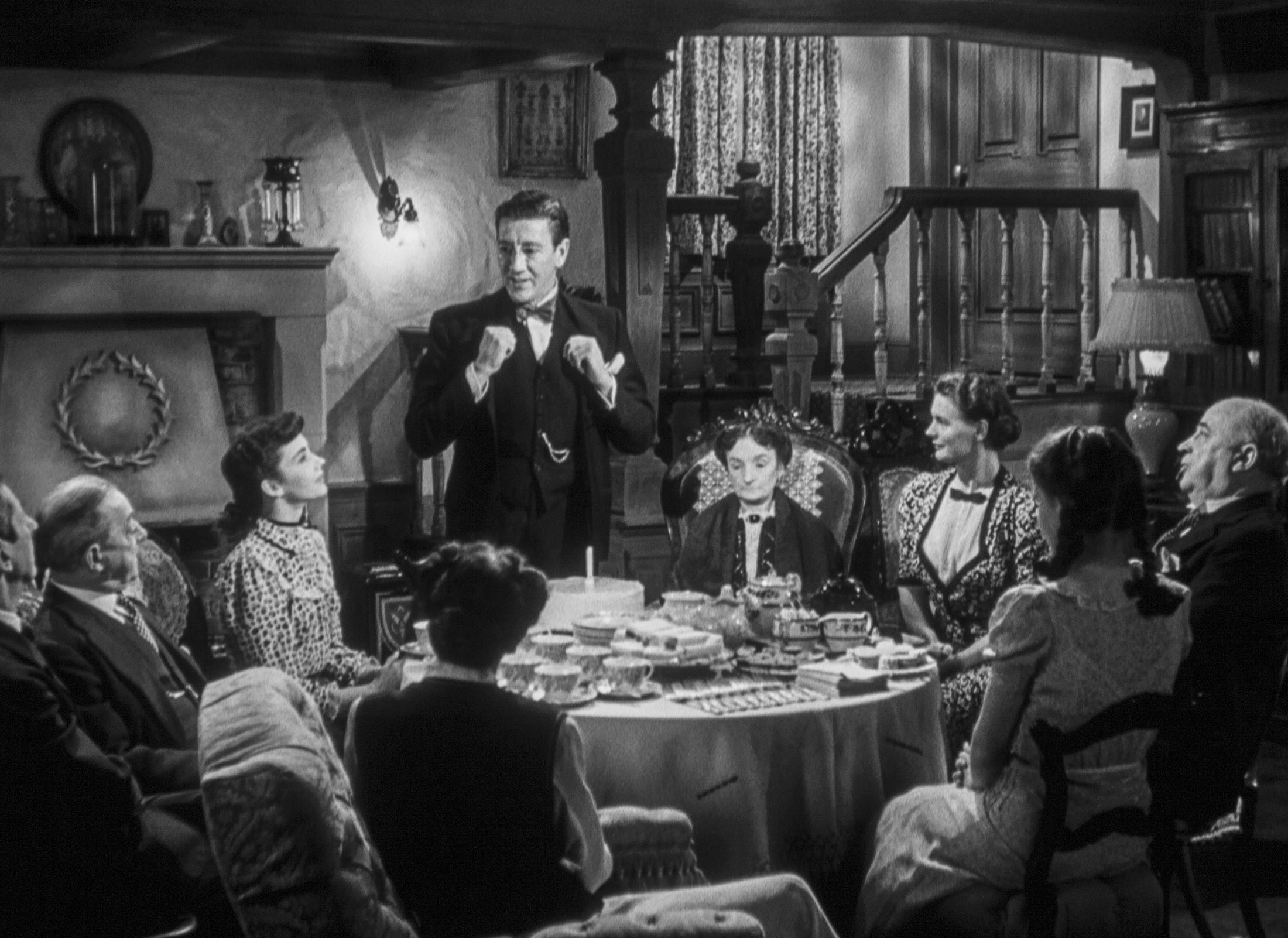 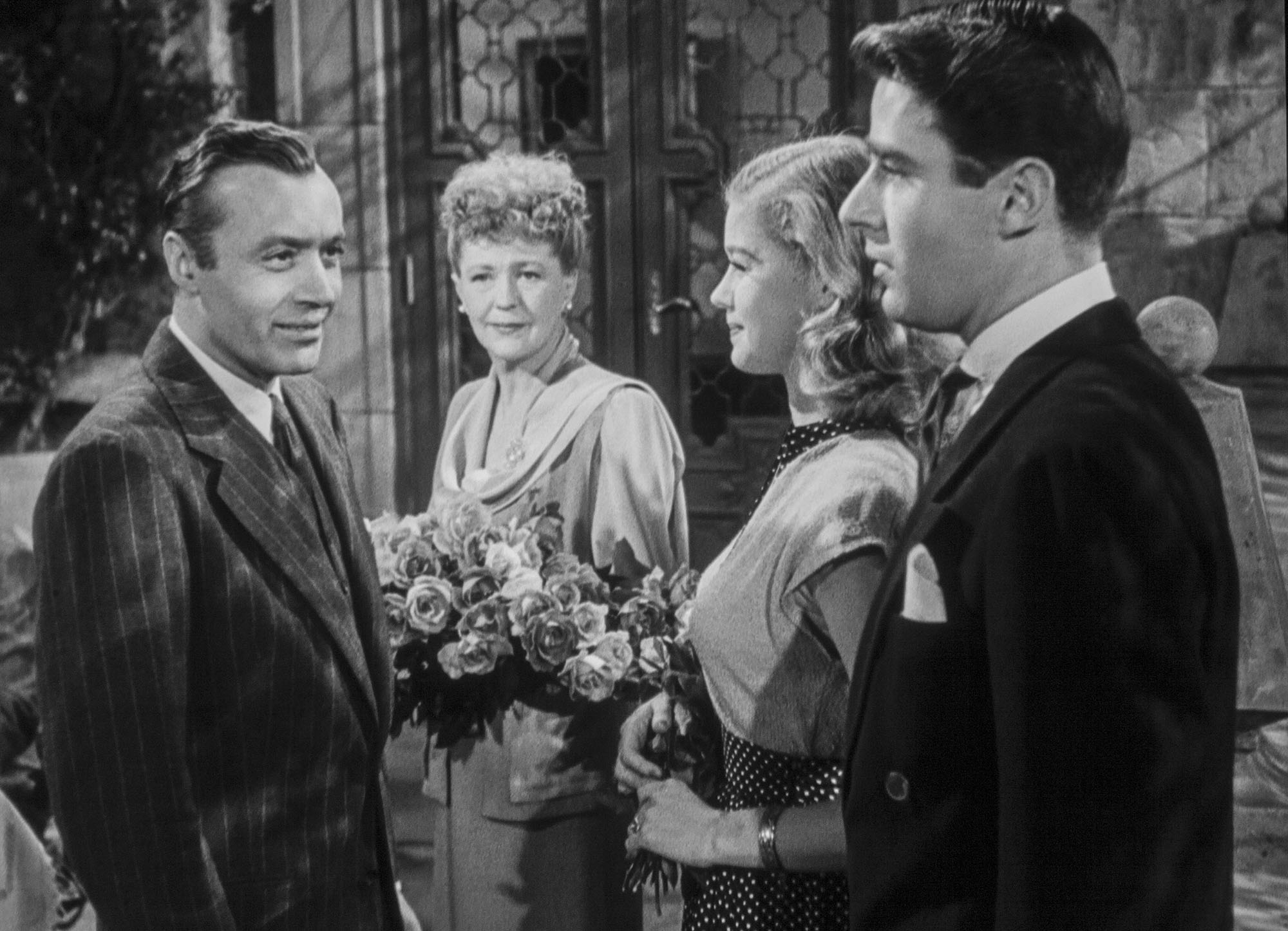 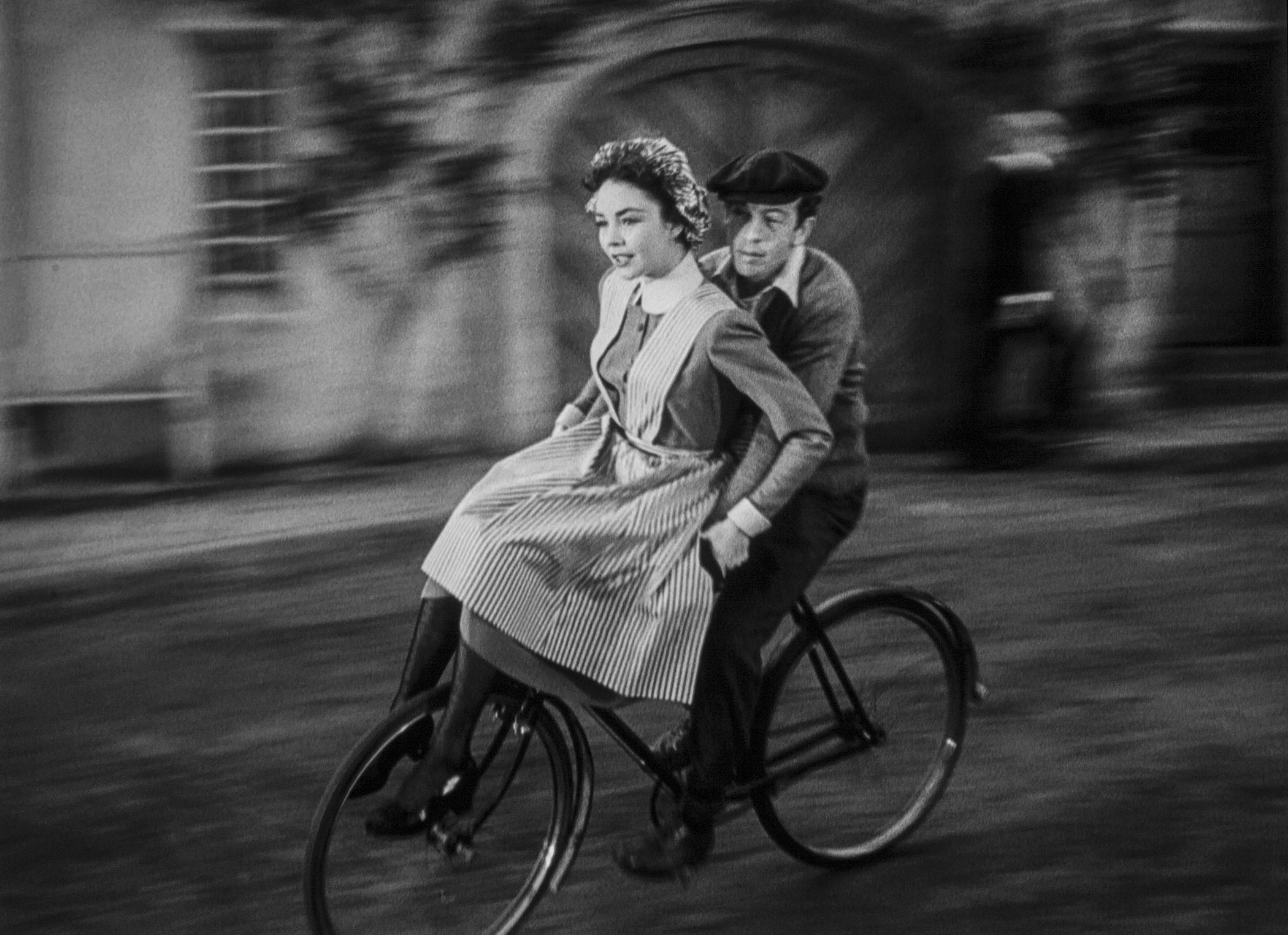 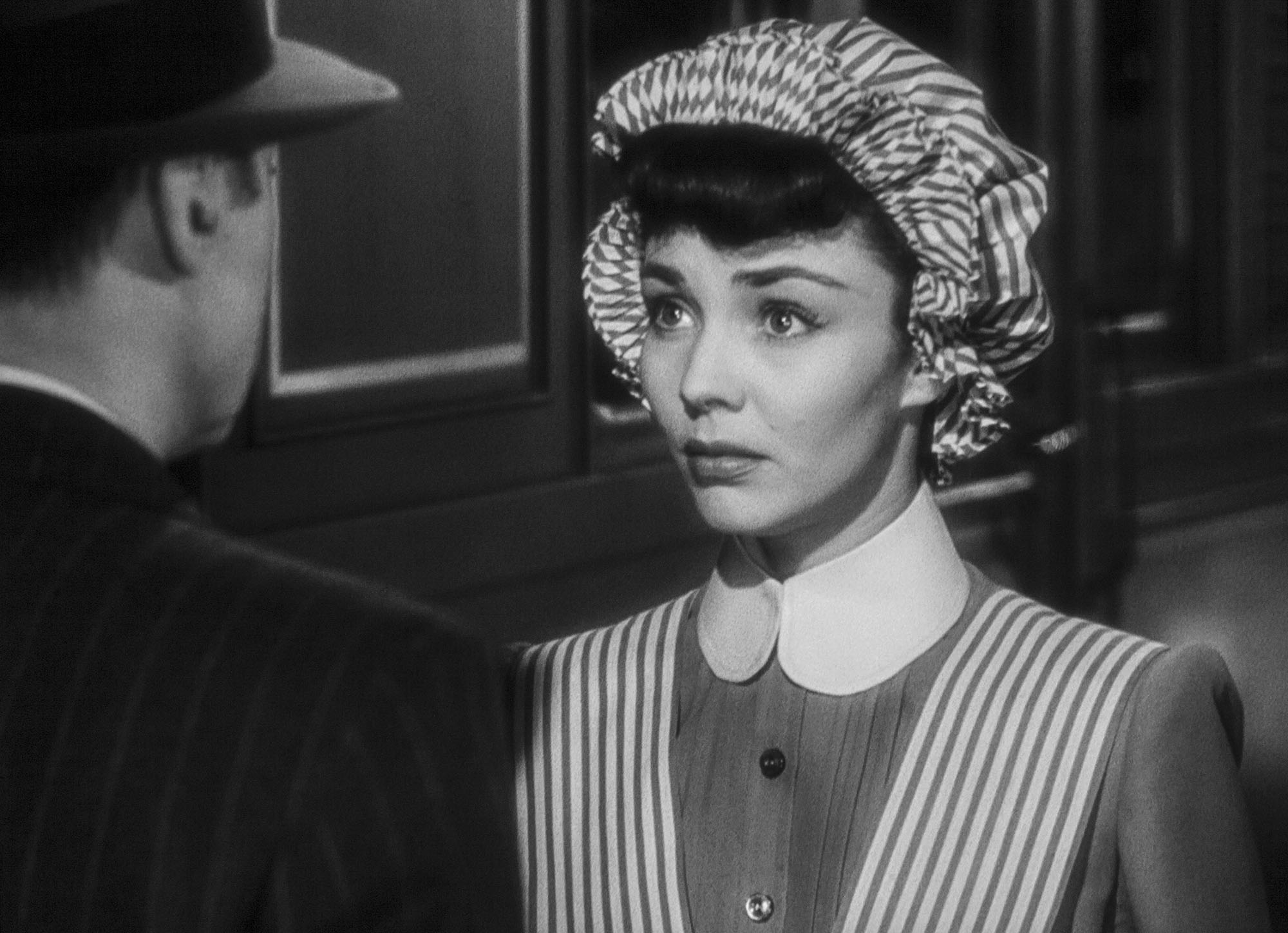 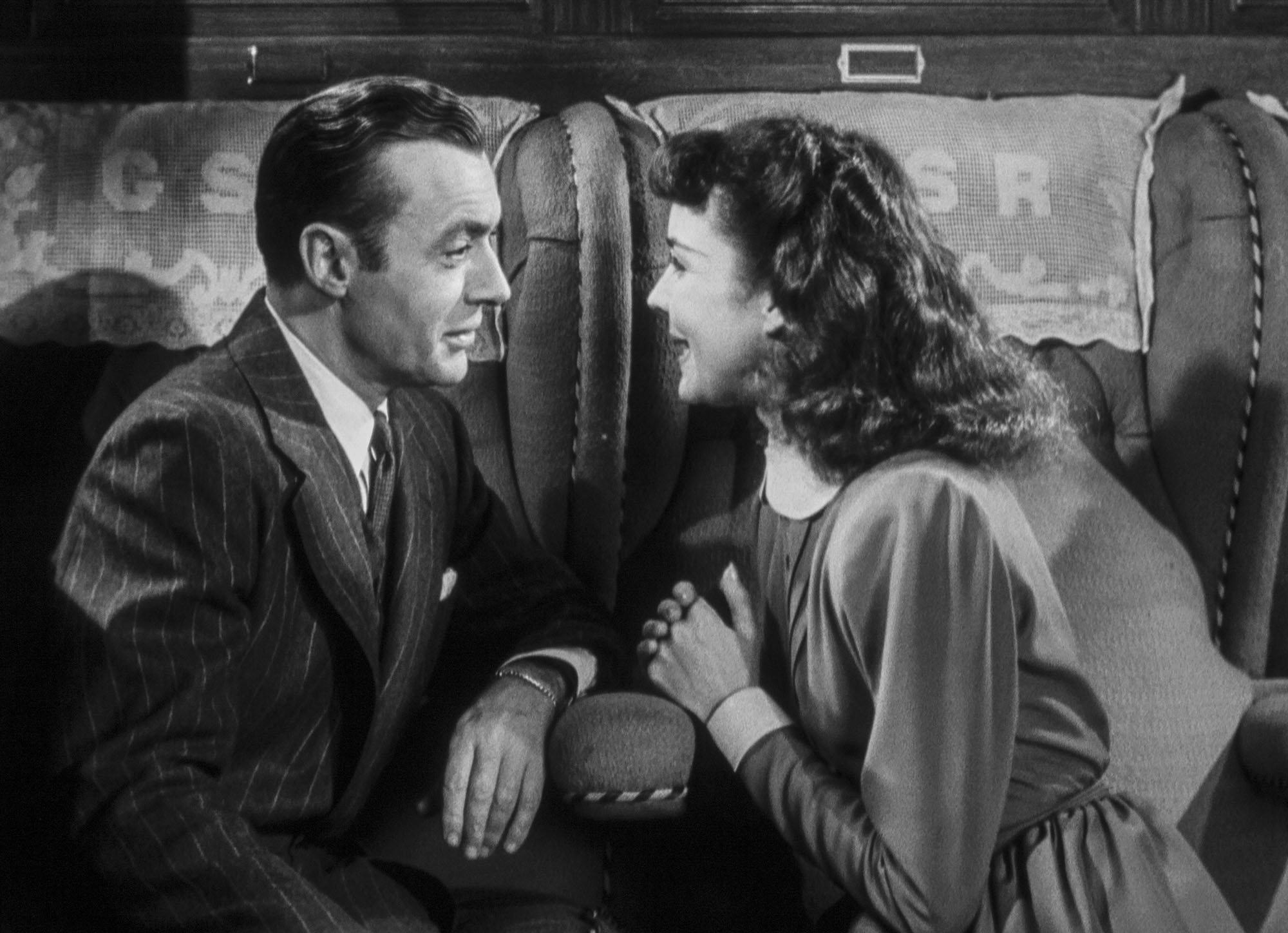 (1) Jonathan prepares to announce their engagement, but another plumbing disaster ends to it.  (2) Belinski bids adieu to Andrew and Betty. He is leaving for the United States.  (3) Cluny races after Belinski to say goodbye and thank him for all his help.  (4) Those eyelashes take center stage again! It's hard to say goodbye.  (5) So they don't. Belinski proposes and Cluny accepts. “They’re both opposites in one way, because he’s cosmopolitan and sophisticated, and she’s cockney and innocent. In another way, they’re both eccentrics and they’re both individualists.” — Molly Haskell, film critic