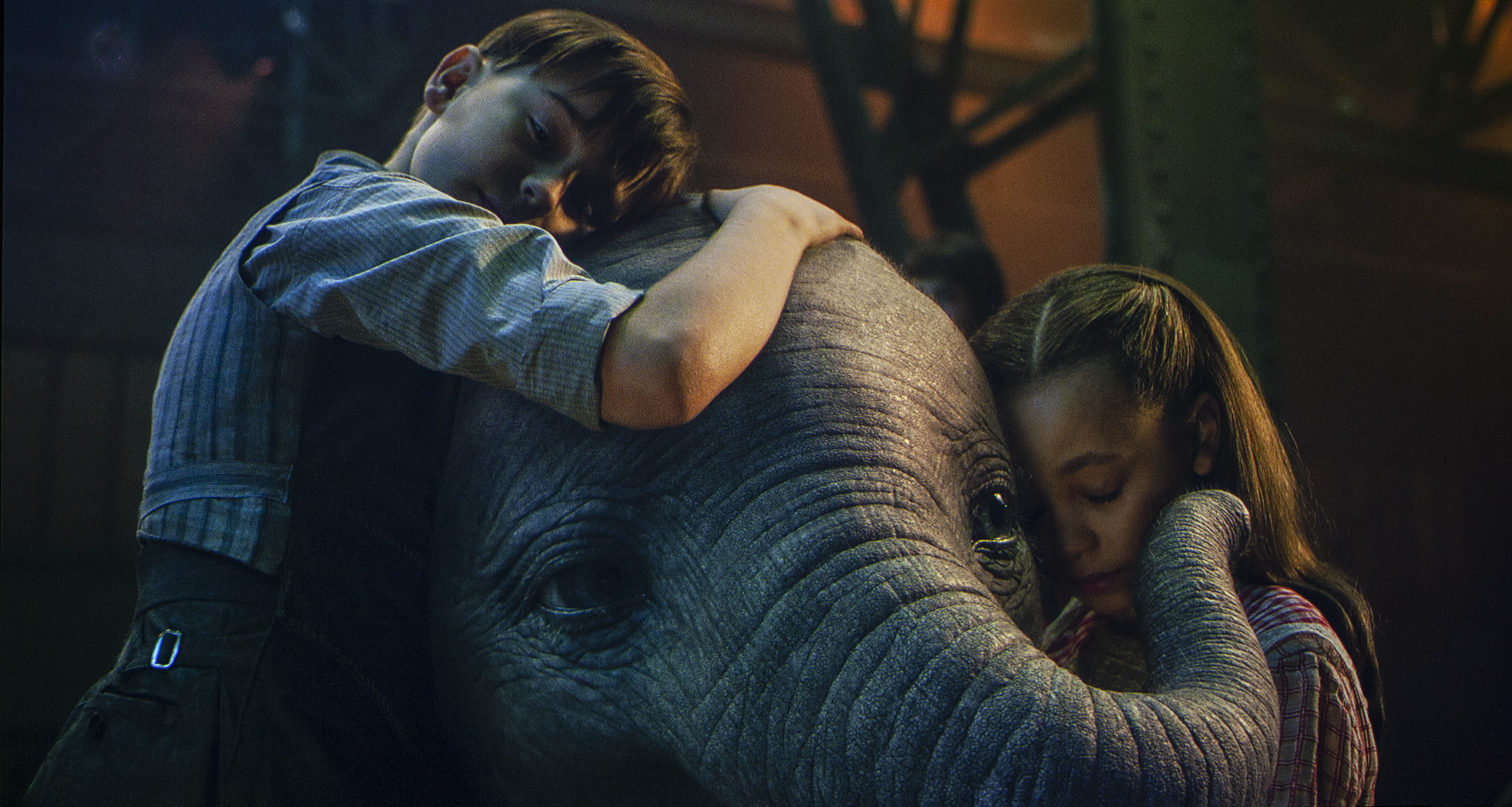 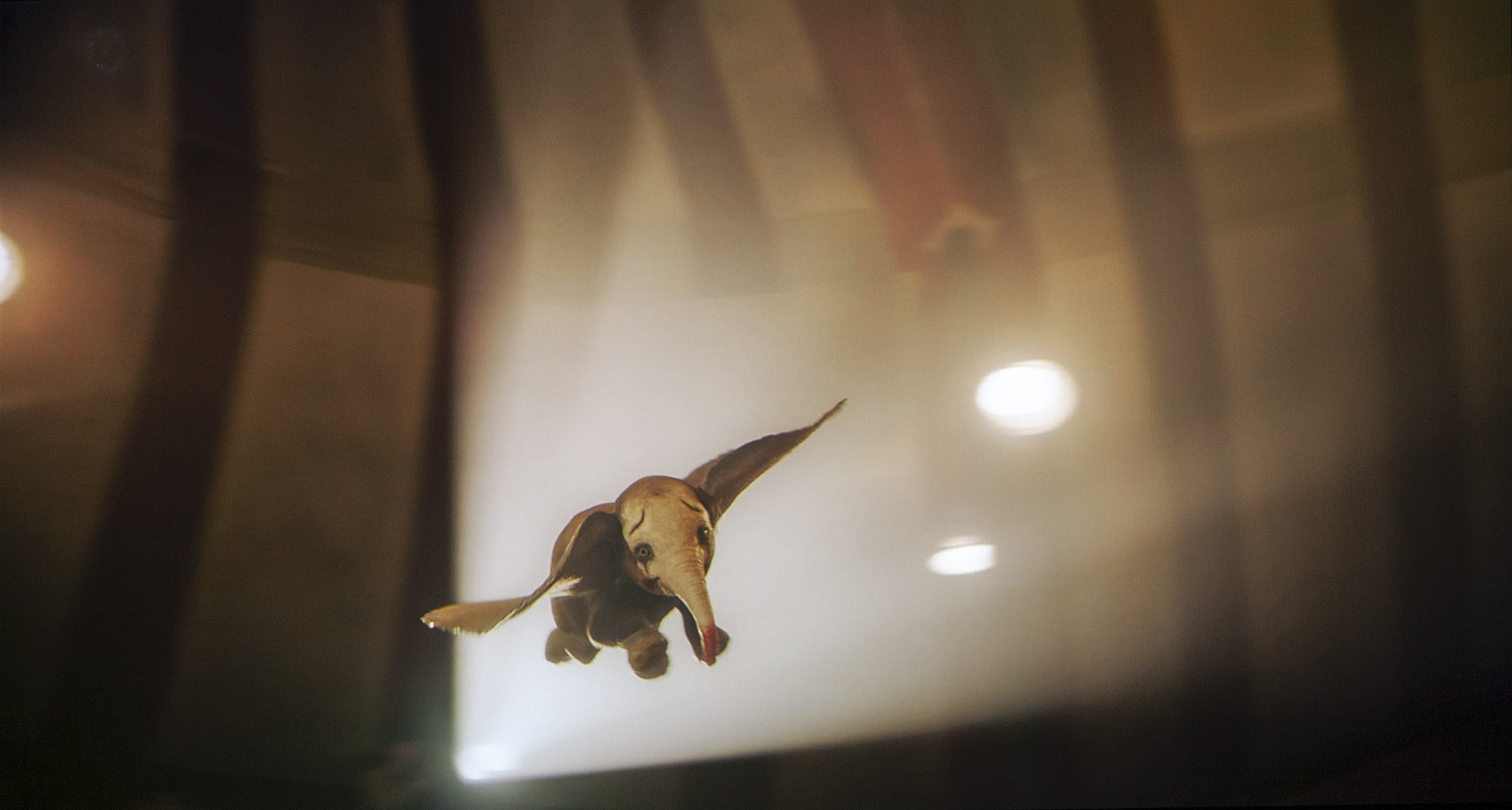 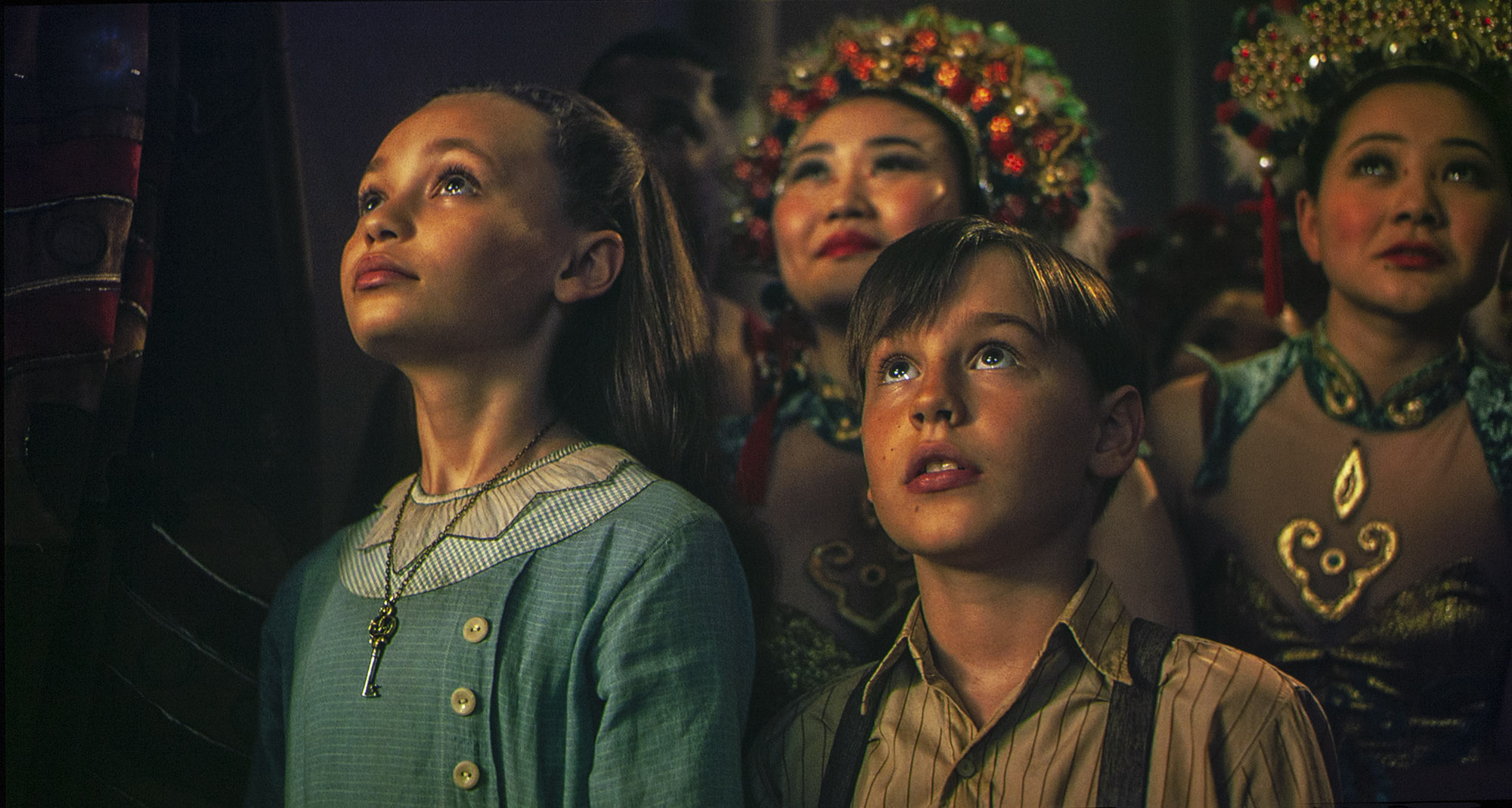 (1) Holt Farrier's children, Milly (Nico Parker) and Joe (Finley Hobbins), comfort and are comforted by baby Dumbo. (2) Baby Dumbo accidentally starts to fly during a performance at the Medici Circus. (3) The children and Medici performers are stunned.

And it’s sad. The 1941 version is a classic hero’s tale; a baby elephant with a special gift goes on a quest with his mentor, Timothy Mouse, to find his mother. They have lots of adventures on the way, but in the end, Dumbo triumphs. All in 64 glorious animated minutes.

The 2019 release set in 1919 is directed by Tim Burton from a script by Ehren Kruger. It's almost twice as long at 112 minutes and makes far less of an impact. Live action and CGI replaces animation. It is dark, both in story and picture using Burton’s singular goth look, with a different story. Humans now lead the tale replacing Dumbo with traveling circus owner Max Medici (Danny DeVito), and WWI veteran/trick rider Holt Farrier (Colin Farrell).

Having lost his arm in the war, Holt returns to his two children, Milly (Nico Parker), who wants to be the next Marie Curie, and Joe (Finley Hobbins) a performer in training. Their mother died during the 1918 flu pandemic that killed more than 500 million people worldwide. “I’m basically a horseman without a horse, and a husband without a wife, and a man without two arms,” Farrell says in the making-of extras.

Home for the Medici Circus is a train; they are always traveling. "Dumbo's" opening scenes shows how they move around the country.
A full-scale Casey Junior was built to create a look of authenticity.
{"items":["eb6f96_f1e6b46152614797a41a72dcc1c96d94~mv2.jpg","eb6f96_b8085c733dc44b9e958c58faaacd5fc2~mv2.jpg","eb6f96_b3b048540eb64f38811d8741bc7976d7~mv2.jpg"],"styles":{"groupSize":3,"showArrows":false,"cubeImages":false,"cubeType":"fill","cubeRatio":1,"isVertical":false,"gallerySize":509,"collageDensity":0.8,"groupTypes":"1,2h,2v,3t,3b,3l,3r","oneRow":false,"imageMargin":0.5,"galleryMargin":0,"floatingImages":0,"chooseBestGroup":true,"smartCrop":false,"hasThumbnails":false,"enableScroll":true,"isGrid":false,"isSlider":false,"isColumns":false,"isSlideshow":false,"cropOnlyFill":false,"fixedColumns":0,"enableInfiniteScroll":1,"isRTL":false,"minItemSize":120,"rotatingGroupTypes":"","rotatingCubeRatio":"","gallerySliderImageRatio":1.7777777777777777,"numberOfImagesPerRow":3,"numberOfImagesPerCol":1,"groupsPerStrip":0,"borderRadius":0,"boxShadow":0,"gridStyle":1,"mobilePanorama":false,"placeGroupsLtr":false,"viewMode":"preview","thumbnailSpacings":0,"galleryThumbnailsAlignment":"bottom","isMasonry":false,"isAutoSlideshow":false,"slideshowLoop":false,"autoSlideshowInterval":4,"useCustomButton":false,"bottomInfoHeight":0,"titlePlacement":"SHOW_ON_HOVER","galleryHorizontalAlign":"center","galleryTextAlign":"center","galleryVerticalAlign":"center","scrollSnap":false,"itemClick":"link","fullscreen":false,"allowSocial":false,"allowDownload":false,"allowTitle":true,"allowDescription":false,"loveButton":false,"loveCounter":false,"videoPlay":"onClick","scrollAnimation":"NO_EFFECT","scrollDirection":0,"overlayAnimation":"NO_EFFECT","arrowsPosition":0,"arrowsSize":23,"watermarkOpacity":40,"watermarkSize":40,"useWatermark":true,"watermarkDock":{"top":"auto","left":"auto","right":0,"bottom":0,"transform":"translate3d(0,0,0)"},"loadMoreAmount":"all","defaultShowInfoExpand":1,"allowTitleExpand":true,"allowDescriptionExpand":true,"allowLinkExpand":true,"expandInfoPosition":0,"allowFullscreenExpand":true,"fullscreenLoop":false,"galleryAlignExpand":"left","addToCartBorderWidth":1,"addToCartButtonText":"","slideshowInfoSize":200,"playButtonForAutoSlideShow":false,"allowSlideshowCounter":false,"hoveringBehaviour":"APPEARS","thumbnailSize":120,"magicLayoutSeed":1,"imageHoverAnimation":"NO_EFFECT","calculateTextBoxHeightMode":"AUTOMATIC","calculateTextBoxWidthMode":"PERCENT","textBoxHeight":0,"textBoxWidth":200,"textBoxWidthPercent":50,"textImageSpace":10,"textBoxBorderRadius":0,"textBoxBorderWidth":0,"textsVerticalPadding":0,"textsHorizontalPadding":0,"titleDescriptionSpace":6,"customButtonText":"","customButtonBorderWidth":1,"customButtonBorderRadius":0,"loadMoreButtonText":"","loadMoreButtonBorderWidth":1,"loadMoreButtonBorderRadius":0,"imageInfoType":"NO_BACKGROUND","itemBorderWidth":0,"itemBorderRadius":0,"itemEnableShadow":false,"itemShadowBlur":20,"itemShadowDirection":135,"itemShadowSize":10,"imageLoadingMode":"BLUR","expandAnimation":"NO_EFFECT","imageQuality":90,"usmToggle":false,"usm_a":0,"usm_r":0,"usm_t":0,"videoSound":false,"videoSpeed":"1","videoLoop":true,"galleryLayout":0,"gallerySizeType":"px","gallerySizePx":509,"allowHover":true,"mobileSwipeAnimation":"NO_EFFECT","gotStyleParams":true,"showVideoPlayButton":true,"modifiedGallerySize":true,"selectedLayout":"0|bottom|1|fill|false|0|1","layoutsVersion":2,"selectedLayoutV2":0,"isSlideshowFont":false,"externalInfoHeight":0,"externalInfoWidth":0},"container":{"galleryWidth":2561,"galleryHeight":1440,"scrollBase":0,"height":null,"width":null}}

Medici has just purchased a pregnant Asian elephant intent on using the baby to boost sagging ticket sales. Big circuses are taking over, crushing small family run operations. But once the little one arrives, it's considered a “baby monster” to everyone except his mother. “I already got fake freaks in the freak show. I don’t need a real one in the center ring!” Medici complains.

There are some particularly nasty scenes of animal abuse in the first third of the film. Our audience had to stop the film. We left it for a few days before trying again. This might be too much for young children, so be cautious.

“For me, ‘Dumbo’ explores the idea of family and all of its strange forms. It was really nice for me to work with people that I’ve worked with before like Michael [Keaton] and Danny DeVito. — Tim Burton recalling ‘Beetlejuice’ and ‘Batman Returns

Before long, Medici, Holt – who becomes the baby’s caretaker – and the public discover Dumbo can fly. Money begins to pour in. So does V.A. Vandevere (Michael Keaton), who runs the biggest circus in America. Vandevere makes an offer for Dumbo and the Medici circus that sounds too good to be true. (It is.) Vandevere wants to create a flying elephant act with his star attraction, aerialist Colette (Eva Green, who worked with Burton in “Miss Peregrine’s Home for Peculiar Children”). Holt and the kids train her and Dumbo for the new act, which must impress financier J. Griffin Remington (Alan Arkin). It seems even the mighty Vandevere is having money trouble.

But you know what they say – the bigger they are, the harder they fall taking everyone with them. Chaotic destruction follows a botched performance with explosions and escaping performers, customers and animals – including Dumbo, who still only wants to be with his mother.

(1) Baby Dumbo is placed on a rising platform above the crowds. Clown-firemen are supposed to rescue him. (2 & 3) Max and Dumbo look uncertain as to how the act will play out. (4) The crowd jeers when Dumbo loses his baby bonnet and his big ears fall out.

There’s an unbelievably happy ending, which has Dumbo and Mrs. Jumbo returning to the jungles of India. What else could we expect? We're the galoots who bought the tickets.

The original “Dumbo” gets bad press now because of a flock of cartoon crows considered stereotypes even in 1941. They were inspired by jazz musicians such as Louis Armstrong and Cab Calloway, a homage then, but not now. They’re the ones who actually teach baby Dumbo how to fly and got one of the best songs, “When I See and Elephant Fly.” All songs, except for a new rendition of “Baby Mine,” have been eliminated from the new film.

“Dumbo” 2019 isn’t a bad picture; it’s a different story with altered sensibilities. It’s also host to a bevy of politically correct tropes that jar many viewers out of the fantasy. But who knows? It might eventually be embraced by the new generation it’s aimed at.

“I remember ‘Dumbo’ as being one of the more simple, emotional Disney movies. The symbol of a character that doesn’t quite fit in, that is very beautiful and I could relate to.” — Tim Burton

This is where the 2019 “Dumbo” takes off. Digitally filmed on Arri cameras, the 2160p was mastered at 3.4K and released in 2K in 1.85:1 aspect ratio. Upscaled to Ultra 4K with HDR Dolby 10 vision, it looks fantastic – far better than the 1080p picture. It is a dramatic difference, giving the Disney-Burton film some much needed magic.

With HDR also available on the digital copy, the whole picture lights up. The director himself feels his “Dumbo” looks “a bit like a Fellini film, but it’s pure Burton-ville all the way.

“You see the texture of the sets and the colors that he chooses. There’s always a duality of feelings. You got the dark, really rich kind of stuff and then there’s that whimsical part of Tim that comes out.” — Danny DeVito

The palette is very warm with gold, reds, and greens dominating against grays and blacks. There is so much shadow, baby Dumbo almost blends in except for his beautiful blue eyes. Detail is excellent and contrast is very good, making characters and sets pop.

Sets are fantastic. They built a full-scale train for Casey Junior in the opening scenes. Then Burton’s world gets even bigger as the Medici circus enters Vandevere’s extravagant Dreamland. Producer Derek Frey explains Burton didn’t want to film a complete  green set. “It’s like a 360-degree world,” he says.

It was built in an old blimp hangar from the ‘30s in Cardington, England, and broken down into 16 set elements says Production Designer Rick Heinrichs, who has worked with Burton since “Pee-Wee’s Big Adventure” (1985). “One of the joys about doing what we do is imagining a world and then making it real,” he says. Oscar winning costumer designer Colleen Atwood also returns to show off her fabulous gifts.

Dumbo gets star treatment once he becomes a crowd favorite ...
But all he cares about his mother, Mrs. Jumbo. Visual Effects Supervisor Richard Stammers says, “It [was] clear that we needed to find that balance between the shape of Dumbo in the cartoon versus a real baby elephant."
The Ultra 4K's HDR10 (disc) & Dolby Vision (streaming) provides richer color and better contrast. revealing more detail in wide shots.

Plenty of effects bounce around the room, but height audio is rarely used. We notice it most in the still-spooky “Pink Elephant” sequence. There’s also a rush of wind and sound of wings when Dumbo flies. During the finale, there’s the rumble of explosions and falling debris. Vandevere’s Nightmare Island, a part of his  park designed to look like a volcano with caged animals in costume and makeup forced to behave like monsters, provides soaring effects.

Danny Elfman incorporated some of the original "Dumbo" tunes into his score.

Bonus features can be found on the Blu-ray disc and digital format, which carries an exclusive, “Dreamland: Anatomy of a Scene.” Three short featurettes create a good making-of experience with interviews from the cast and filmmakers: “Circus Spectaculars,” with behind-scenes footage; “The Elephant Room,” about designing Dumbo’s look, and ability to fly; and “Built to Amaze” about how the sets and costumes were designed.

There are nine deleted scenes, and a gag reel, “Clowning Around.” “Easter Eggs on Parade” notes visual and script references to the 1941 film. “‘Baby Mine’: Performed by Arcade Fire” is a music video.

“It’s always good to work with your friends who care about you and you care about. ‘Dumbo’s’ a reminder for people they have to care for others and embrace who they are.” — Danny DeVito

It was easy to believe in and care about the animated “Dumbo”; the 2019 highlights the men behind the curtain. There’s no doubt a mighty effort went into this live-action reboot, but it’s just a notch on the spread sheet. Disney re-adaptations are more Vandevere spectacle than heartfelt story.

The original was adapted from a book by Helen Aberson-Mayer and Harold Pearl, opted it by Walt Disney before publication. It was another gamble for him, a risk hoping for big rewards.

What happened to spirit and imagination at the House of Mouse? There are other new and classic stories ready for their day on the big screen. Children of all-ages are waiting for them.

Entertainment mogul V.A. Vandevere (Michael Keaton) shows up at the Medici Circus to make Max an offer he can't refuse. It turns out he's an even better con artist than Max.
The Medici Circus and Dumbo become part of Vandevere's Dreamland amusement park.
Aerialist Colette (Eva Green) must give up her star act to perform with Dumbo. “I was absolutely … terrified of heights,” Green says. But after working with Aerial Trainer Katherine Arnold and Personal Trainer David Kingsbury, she became stronger, more confident and able to perform as a true aerialist.
Dreamland has hundreds of performers and draws enormous crowds. It is more polished than the Medici Circus could ever hope to be ...
Even so, Vandevere needs financial aid - and believes J. Griffin Remington (Alan Arkin) will be able to get him the money he wants once he sees Dumbo perform.
After the failure of Dumbo's first live performance, Vandevere threatens Holt and his children. The act must work - or else!
Colette tries to comfort Dumbo and Joe. Oscar winning costumer designer Colleen Atwood designed more exotic wigs, costumes and apparel once the Medici's join Dreamland. Costumes and apparel at the start of the film are deliberately minimal, she says.
Colette and Dumbo get ready to perform again. "Pink Elephants on Parade," a tune from the original film, becomes their introduction.
The Medici family of performers try to comfort Dumbo, who misses his mother.
{"items":["eb6f96_996ae6708af347a58ba3dfd250b56a3a~mv2.jpg","eb6f96_678295d90b0c49369dc2d4a29f0c1af5~mv2.jpg"],"styles":{"galleryType":"Columns","groupSize":1,"showArrows":false,"cubeImages":true,"cubeType":"fill","cubeRatio":1.7777777777777777,"isVertical":true,"gallerySize":300,"collageAmount":0,"collageDensity":0,"groupTypes":"1","oneRow":false,"imageMargin":0.5,"galleryMargin":0,"floatingImages":0,"chooseBestGroup":true,"smartCrop":false,"hasThumbnails":false,"enableScroll":true,"isGrid":true,"isSlider":false,"isColumns":false,"isSlideshow":false,"cropOnlyFill":false,"fixedColumns":2,"enableInfiniteScroll":1,"isRTL":false,"minItemSize":50,"rotatingGroupTypes":"","rotatingCubeRatio":"","gallerySliderImageRatio":1.7777777777777777,"numberOfImagesPerRow":2,"numberOfImagesPerCol":1,"groupsPerStrip":0,"borderRadius":0,"boxShadow":0,"gridStyle":1,"mobilePanorama":false,"placeGroupsLtr":false,"viewMode":"preview","thumbnailSpacings":0,"galleryThumbnailsAlignment":"bottom","isMasonry":false,"isAutoSlideshow":false,"slideshowLoop":false,"autoSlideshowInterval":4,"useCustomButton":false,"bottomInfoHeight":0,"titlePlacement":"SHOW_ON_HOVER","galleryHorizontalAlign":"center","galleryTextAlign":"center","galleryVerticalAlign":"center","scrollSnap":false,"itemClick":"link","fullscreen":false,"allowSocial":false,"allowDownload":false,"allowTitle":true,"allowDescription":false,"loveButton":false,"loveCounter":false,"videoPlay":"onClick","scrollAnimation":"NO_EFFECT","scrollDirection":0,"overlayAnimation":"NO_EFFECT","arrowsPosition":0,"arrowsSize":23,"watermarkOpacity":40,"watermarkSize":40,"useWatermark":true,"watermarkDock":{"top":"auto","left":"auto","right":0,"bottom":0,"transform":"translate3d(0,0,0)"},"loadMoreAmount":"all","defaultShowInfoExpand":1,"allowTitleExpand":true,"allowDescriptionExpand":true,"allowLinkExpand":true,"expandInfoPosition":0,"allowFullscreenExpand":true,"fullscreenLoop":false,"galleryAlignExpand":"left","addToCartBorderWidth":1,"addToCartButtonText":"","slideshowInfoSize":200,"playButtonForAutoSlideShow":false,"allowSlideshowCounter":false,"hoveringBehaviour":"APPEARS","thumbnailSize":120,"magicLayoutSeed":1,"imageHoverAnimation":"NO_EFFECT","calculateTextBoxHeightMode":"AUTOMATIC","calculateTextBoxWidthMode":"PERCENT","textBoxHeight":0,"textBoxWidth":200,"textBoxWidthPercent":50,"textImageSpace":10,"textBoxBorderRadius":0,"textBoxBorderWidth":0,"textsVerticalPadding":0,"textsHorizontalPadding":0,"titleDescriptionSpace":6,"customButtonText":"","customButtonBorderWidth":1,"customButtonBorderRadius":0,"loadMoreButtonText":"","loadMoreButtonBorderWidth":1,"loadMoreButtonBorderRadius":0,"imageInfoType":"NO_BACKGROUND","itemBorderWidth":0,"itemBorderRadius":0,"itemEnableShadow":false,"itemShadowBlur":20,"itemShadowDirection":135,"itemShadowSize":10,"imageLoadingMode":"BLUR","expandAnimation":"NO_EFFECT","imageQuality":90,"usmToggle":false,"usm_a":0,"usm_r":0,"usm_t":0,"videoSound":false,"videoSpeed":"1","videoLoop":true,"galleryLayout":2,"gallerySizeType":"px","gallerySizePx":300,"allowHover":true,"mobileSwipeAnimation":"NO_EFFECT","gotStyleParams":true,"showVideoPlayButton":true,"imageResize":false,"galleryImageRatio":2,"modifiedGallerySize":true,"selectedLayout":"2|bottom|1|fill|true|0|1","layoutsVersion":2,"selectedLayoutV2":2,"isSlideshowFont":false,"externalInfoHeight":0,"externalInfoWidth":0},"container":{"galleryWidth":2561,"galleryHeight":1440,"scrollBase":0,"height":null,"width":null}}

“It’s really important that we get the subtlety of [Dumbo's] facial expressions and eyes. The way the skin moves over the muscles," Visual Effects Supervisor Richard Stammers says. "For the flying sequences, gaining lift when you’re that size is quite a challenging thing to get right ... weight and gravity and how do [we see] he’s light enough to carry himself through the air without falling flat on his face?”

When Dreamland goes up in flames, Dumbo helps get the Farrier family to safety.

Behind the Scenes Video

The enchanting “Roman Holiday” has new life with its 4K restoration