Howling in a delicious new Collector’s Edition: “An American Werewolf in London”

The full moon rises over London and American David Kessler (David Naughton) begins his first transformation into a dangerous and vicious werewolf.

“AN AMERICAN WEREWOLF IN LONDON”

Blu-ray; 1981; R for violence and gore, mild sex and profanity

WITH ITS soundtrack of great lunar tunes – “Bad Moon Rising,” “Blue Moon,” and “Moondance” – “An American Werewolf in London” has aged well. That’s quite a feat, considering it was written in 1969 by an 18-year-old John Landis, who was inspired by Mark Twain and a Roma funeral in the former Yugoslavia. The fact that “American Werewolf” took 12 years to make reflects producers’ lack of faith that a movie combining gruesome horror and clever comedy could succeed. But both Landis’ successes (“Animal House,” “Blues Brothers”) and some creative financing made the production possible.

Landis borrowed classic Universal Studios “Wolf Man” tropes for the film, transporting them to 1980s England, where a young American (à la “Connecticut Yankee in King Arthur’s Court”) is the clueless fish out of water who transforms into an accursed, people-eating shape-shifter.

We meet hitchhikers David (David Naughton) and his buddy Jack (Griffin Dunne) as they’re dropped off in the middle of the desolate Yorkshire countryside. The driver’s parting advice is to “stay on the road – keep off the moors!” As a cold and rainy night descends, David and Jack find a tiny village and take shelter in its only pub, with a grisly-looking sign and menacing name, “The Slaughtered Lamb.” 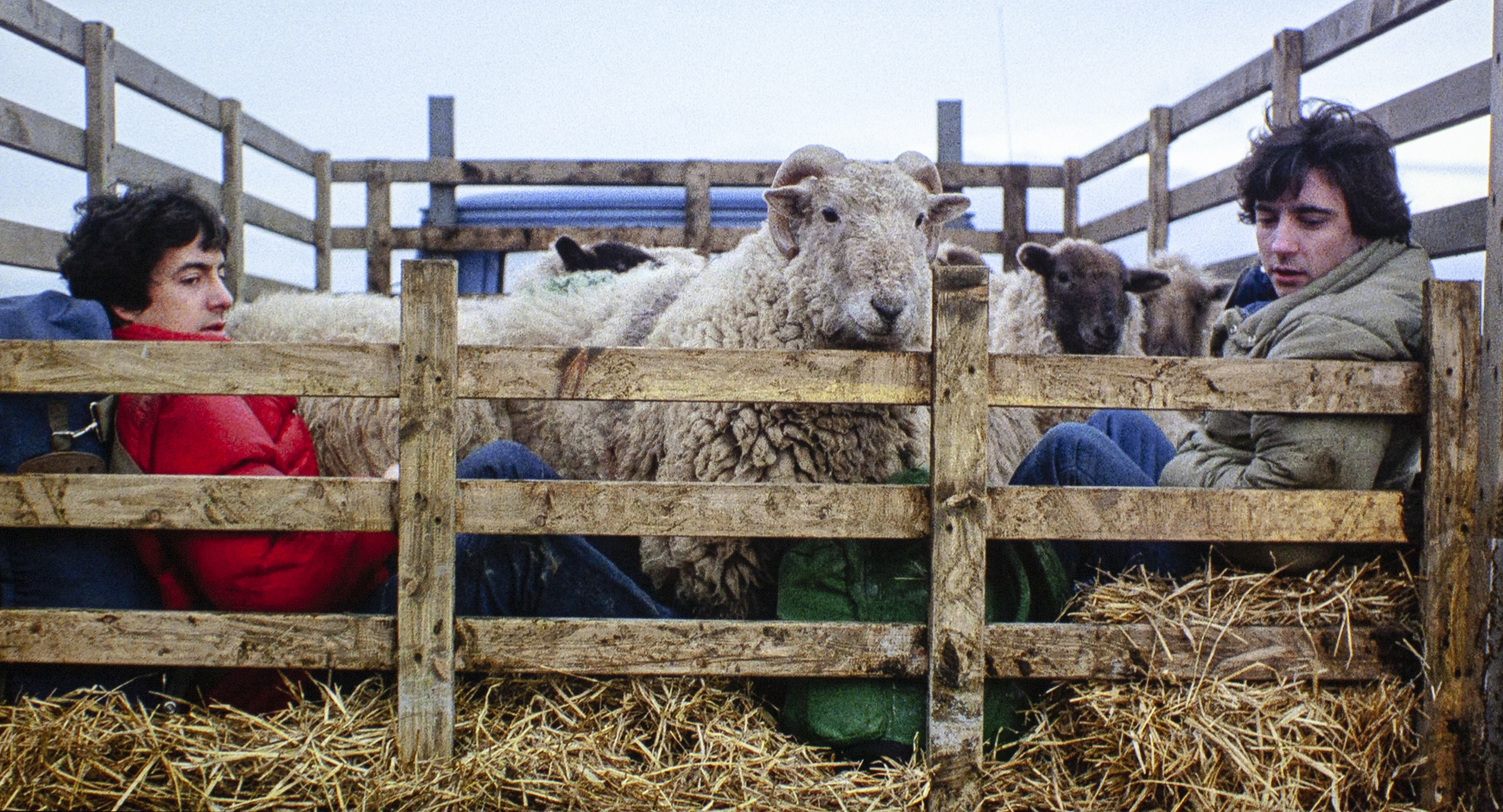 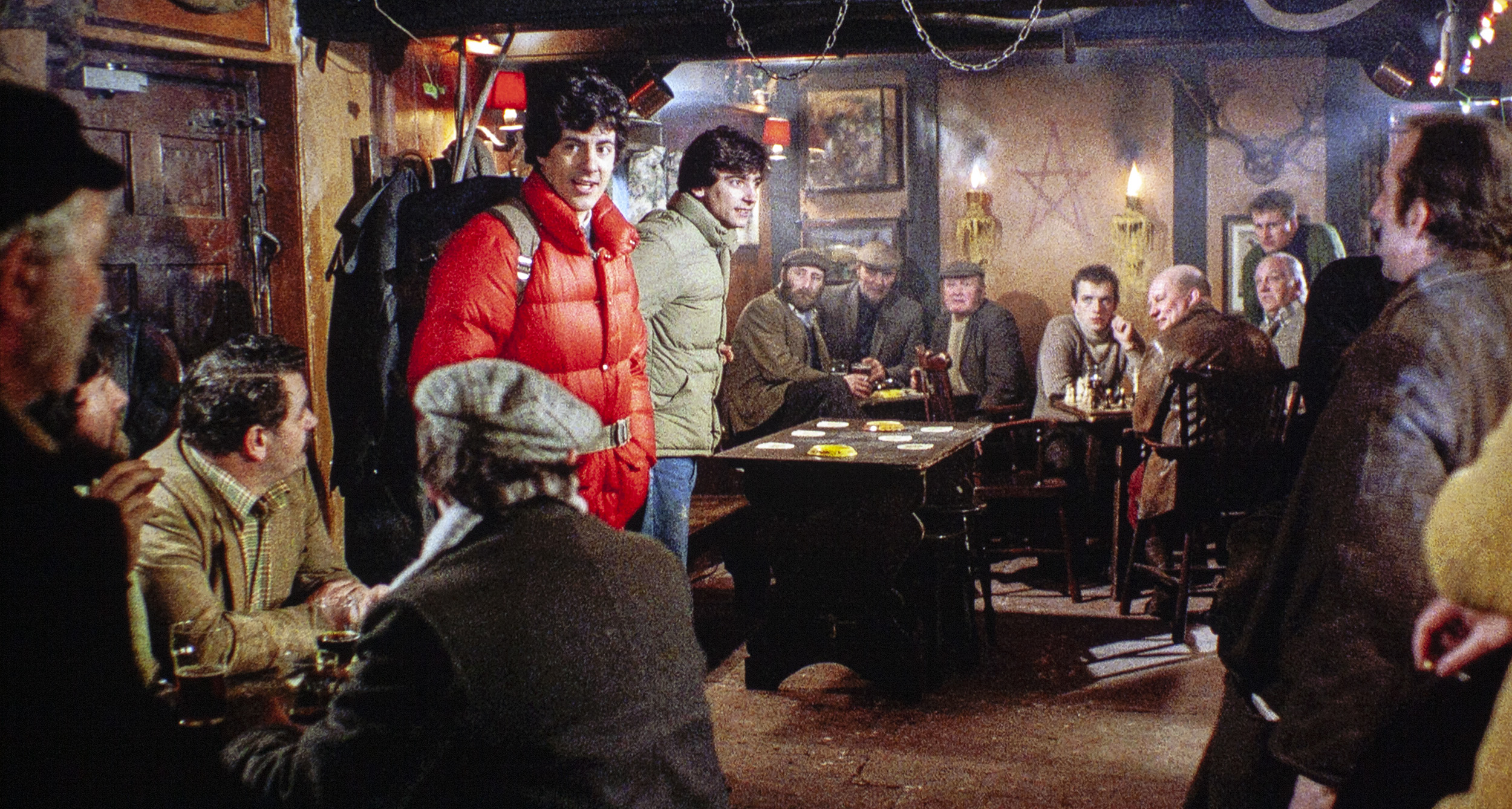 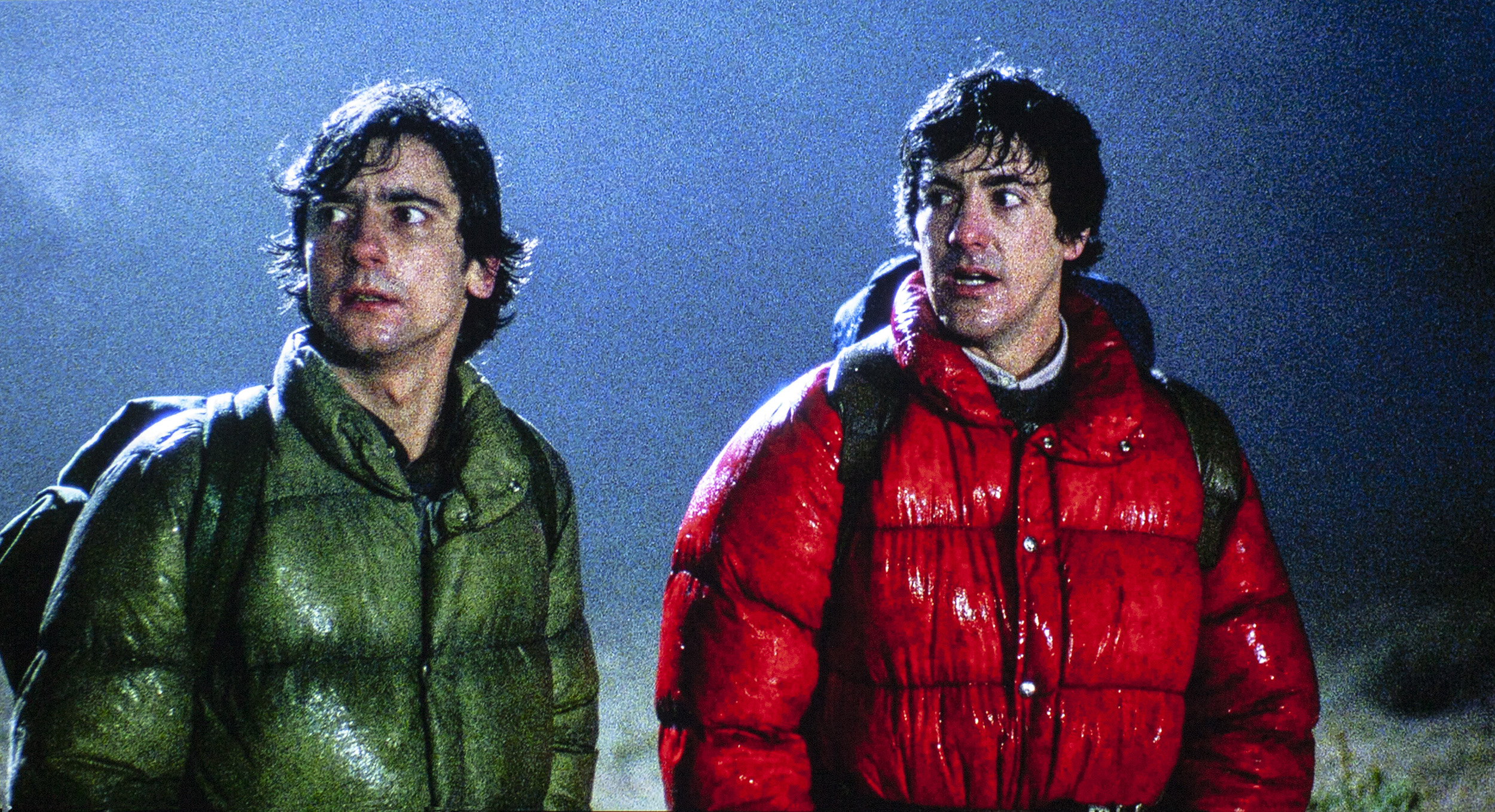 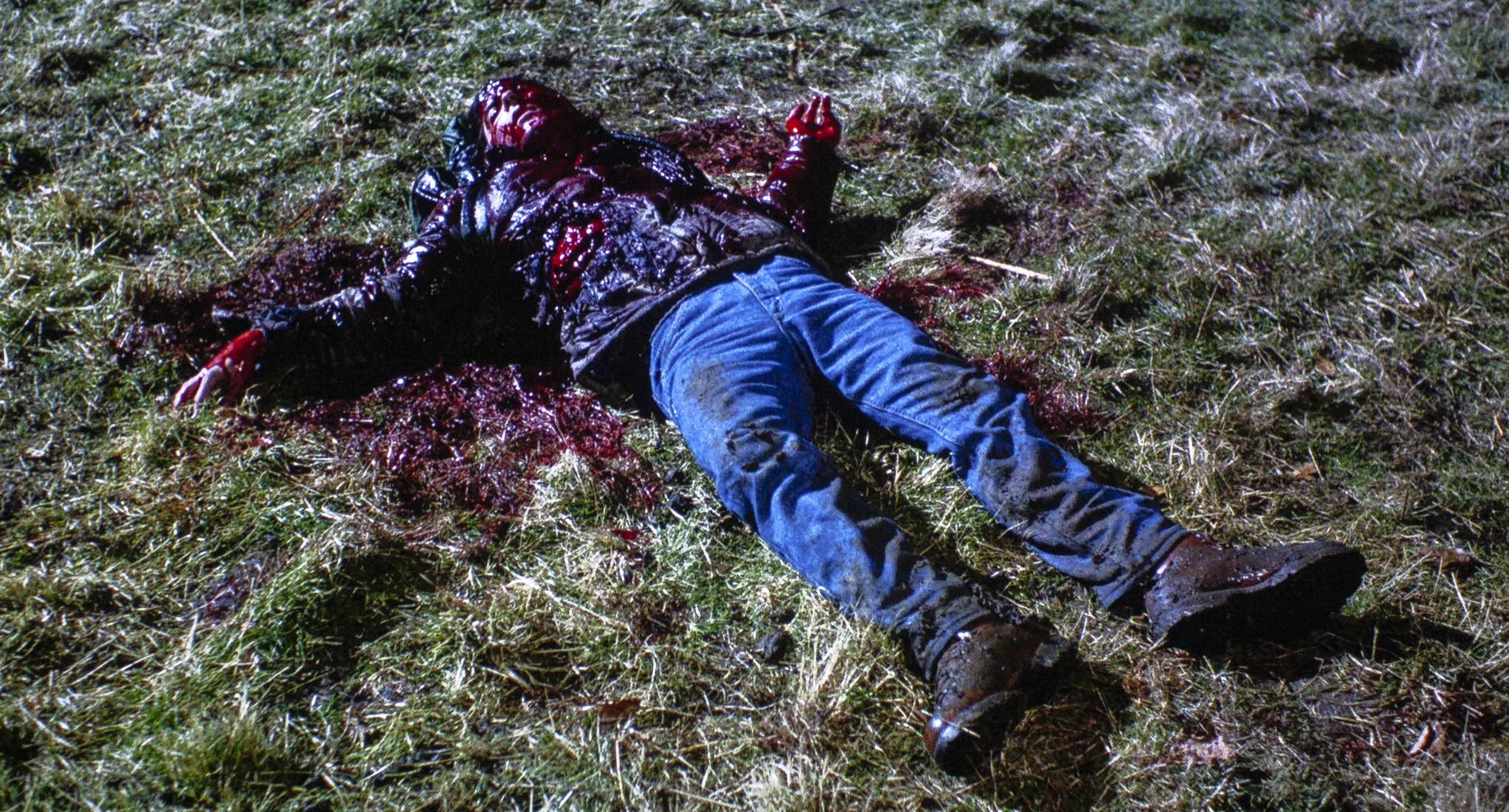 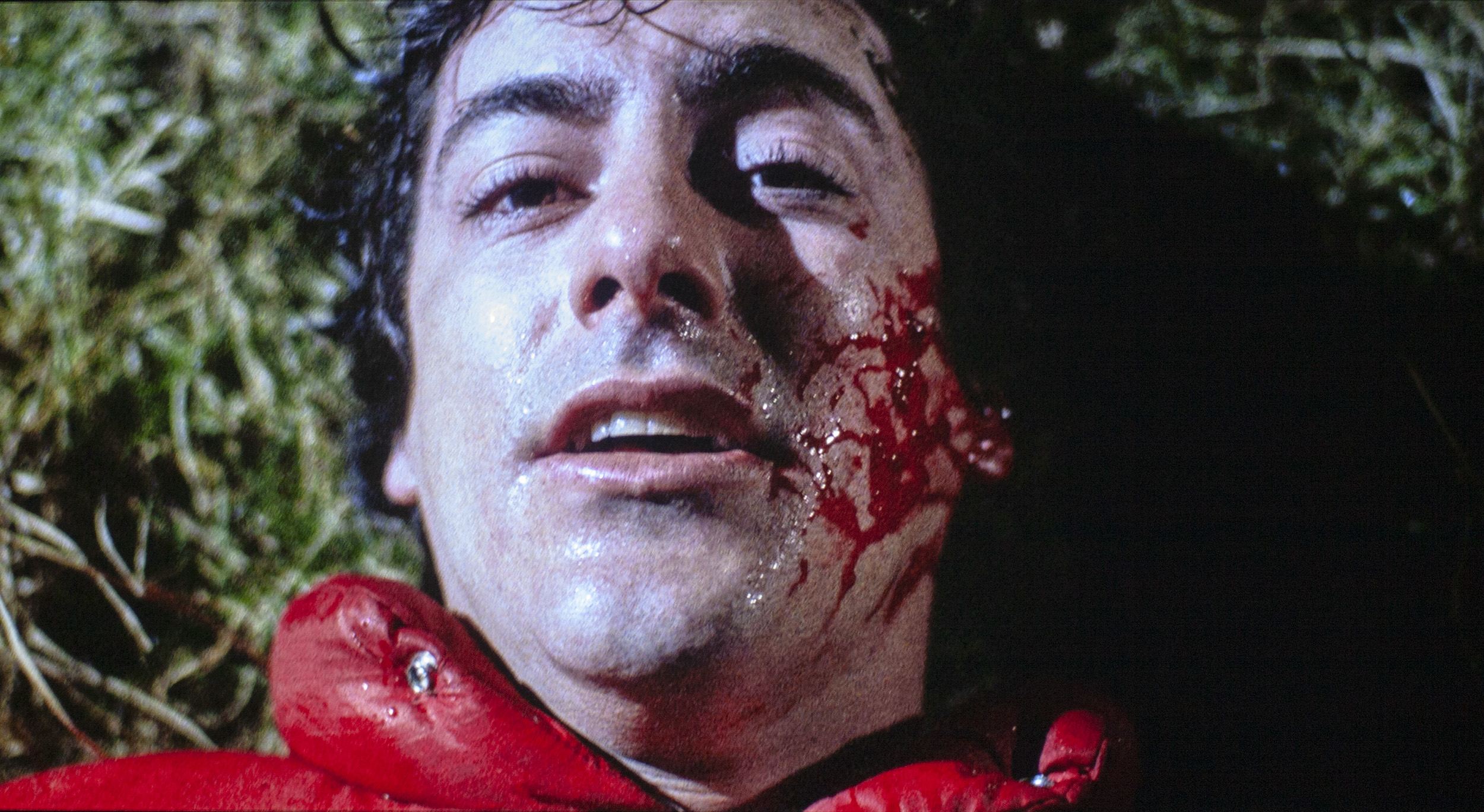 (1) Americans David Kessler and Jack Goodman are backpacking through the UK during a three-month tour of Europe. In East Proctor within Northern England, they catch a ride with a sheepherder. (2&3) As night falls, they seek shelter in a pub called The Slaughtered Lamb. After several uncomfortable moments, David and Jack leave and are told to stay on the road and avoid the moors. Someone yells, "Beware the moon." (4&5) In the darkness and rain, a werewolf devours Jack and badly scratches David across the face and chest.

And just as in every werewolf or vampire movie, the pub goes from raucous noise to dead silence when the strangers enter. They are far from welcome there and urged to leave, except by the barmaid, who knows the danger they face on the moors when the moon is full. But out they go, and are soon viciously attacked. David, with multiple wounds, wakes up in a London hospital and learns that Jack had died in the attack. What follows is David’s visitations by a hideously slashed and progressively putrefying dead friend; David’s romance with Alex, his pretty nurse (Jenny Agutter); and the realization that he is now victim to grotesque changes when there’s a full moon. There are many comedic moments to be found in this exquisitely gory film. Rick Baker, who designed the ingenious ground-breaking makeup and effects of “Werewolf,” received the first Oscar ever given in that category.

While “American Werewolf” has come out a few times on disc, including on Blu-ray by Universal, this Arrow Video restoration was made from the original 35mm negative and scanned in 4K (1.85:1 aspect ratio), then graded and restored in 2K, approved by Landis. It looks splendid, with deep color saturation, natural skin tones, and lots of fine detail and natural film grain. The DTS-HD Master Audio mono soundtrack is also very good, the music perfectly balanced, with consistently clear and intelligible dialogue.

The bonus features on the Arrow disc are beyond generous, and include many from previous digital incarnations, such as a commentary by Naughton and Dunne; “Beware the Moon,” a fine feature-length documentary by Paul Davis; a making-of documentary; interviews with Landis and Rick Baker; “I Walked With a Werewolf” archival interview with Baker; “Casting of the Hand” featurette about creating one of the effects; an outtake reel; and a storyboard featurette. 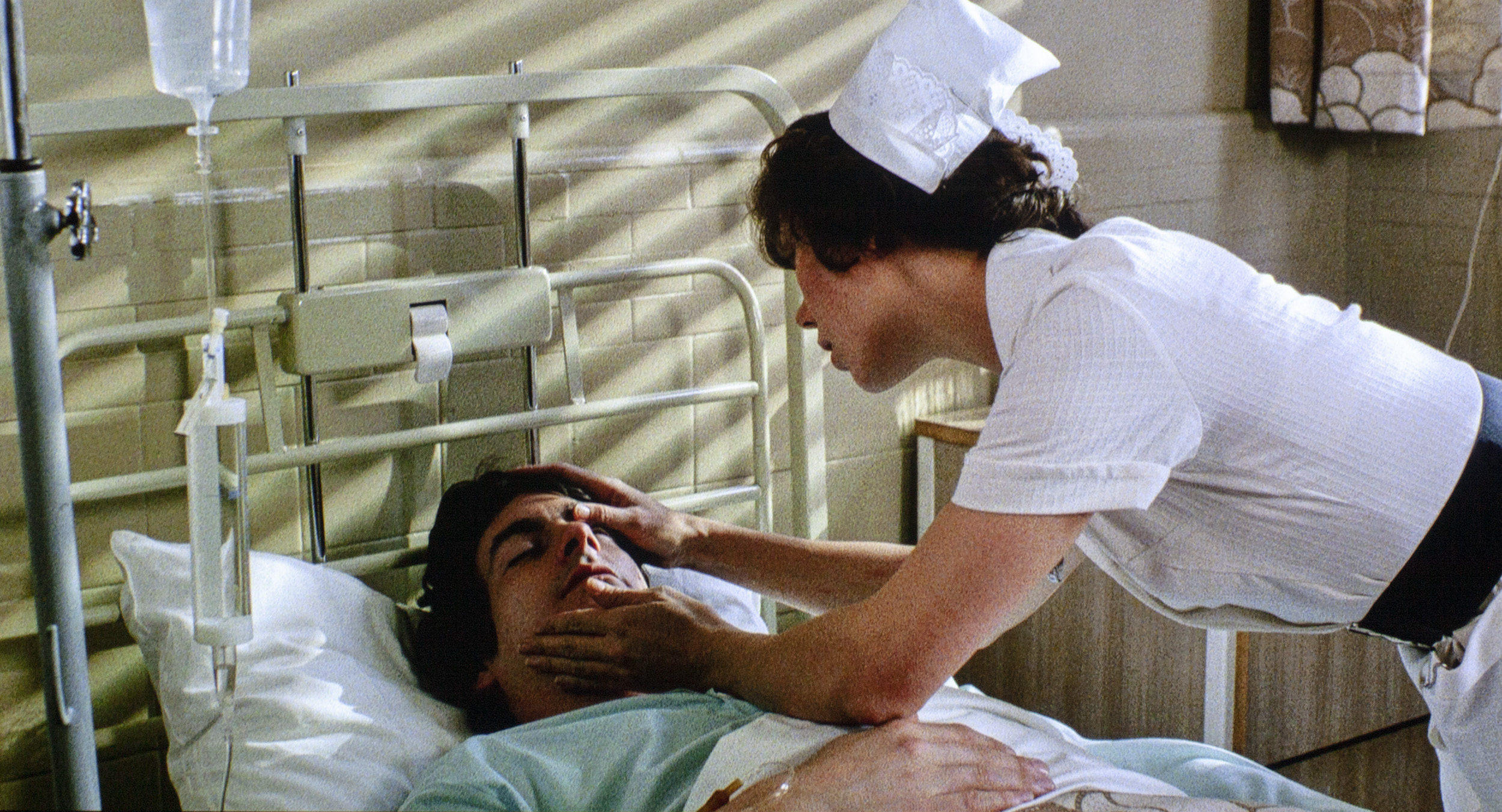 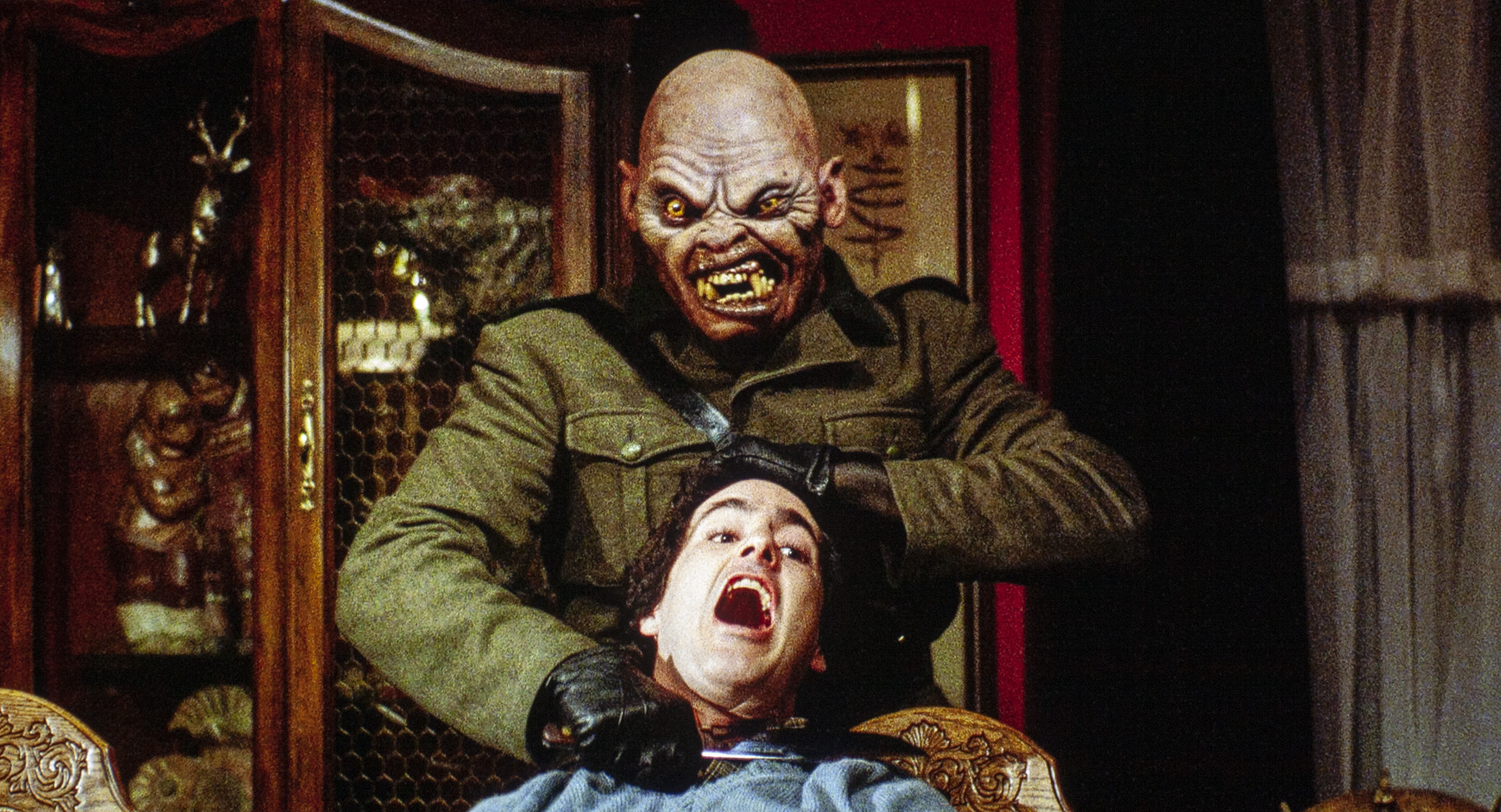 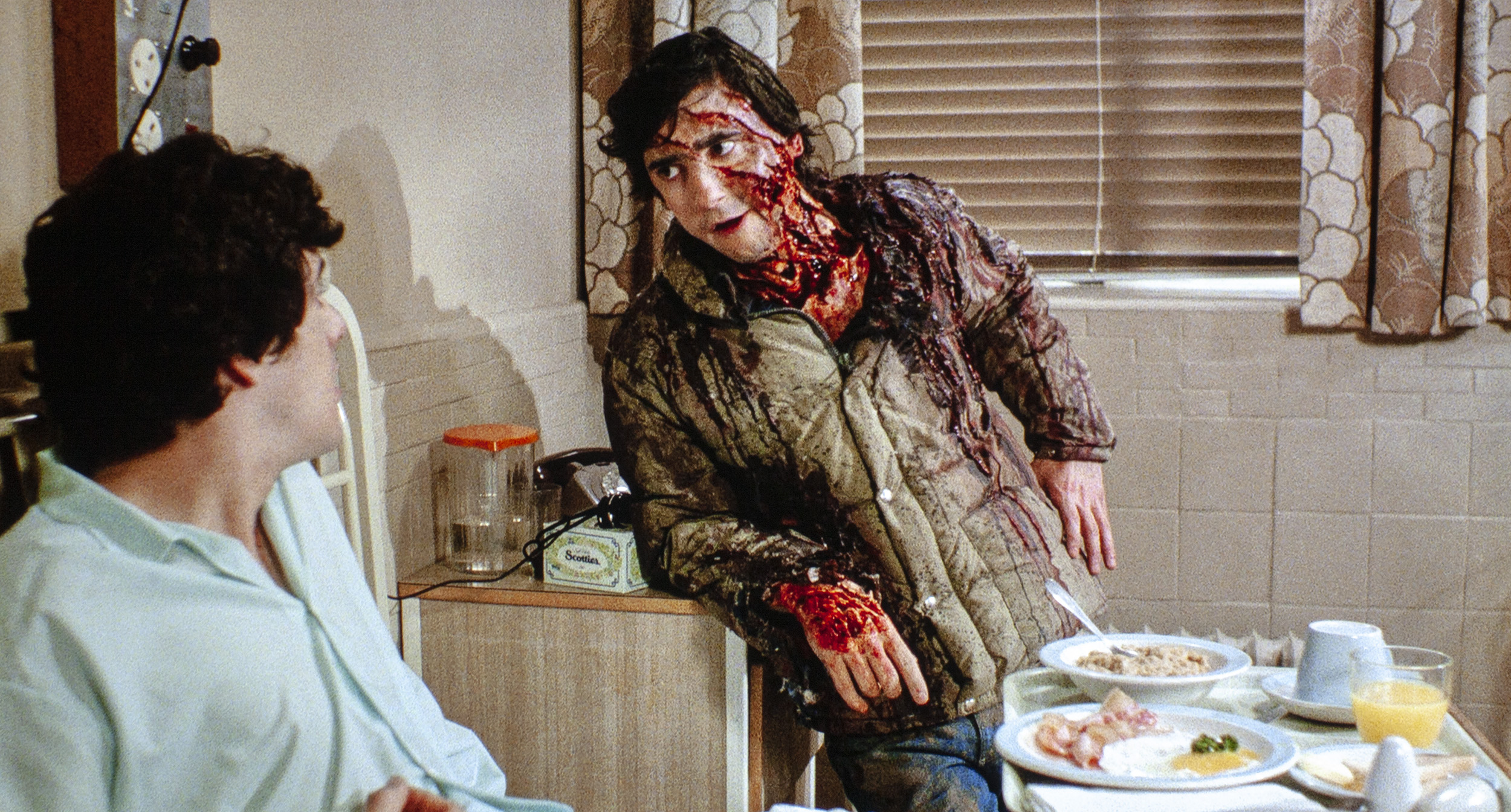 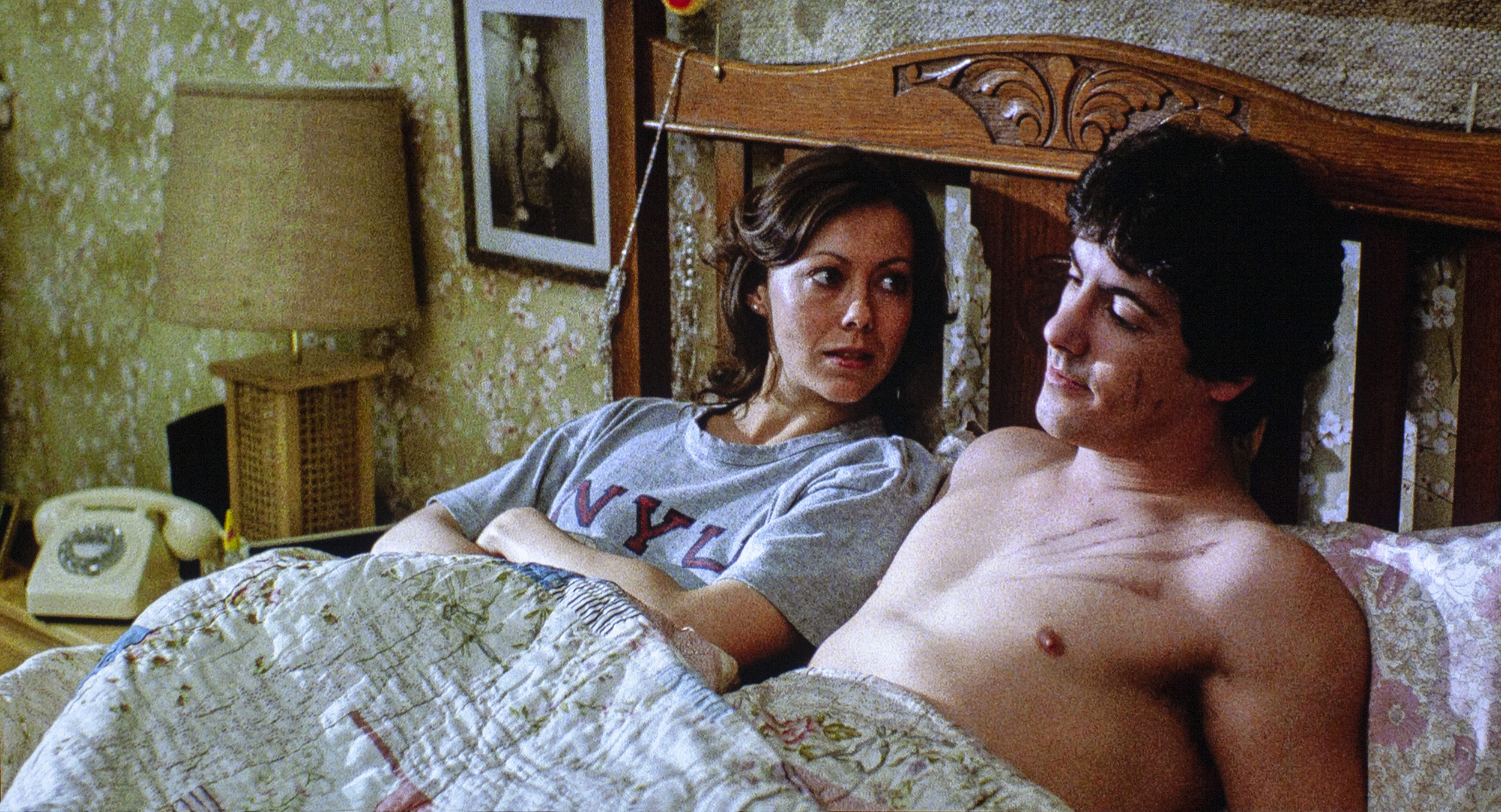 (1) David spends the next three weeks recuperating at St. Martin's Hospital in London, where he's attended by nurse Alex Price (Jenny Agutter). (2) David is plagued by horrific nightmares. (3) David is visited by the ghost of Jack whose face and body are mauled. (4) When David is discharged from the hospital Alex invites him to stay at her place. They are attracted to each other and one thing leads to another.

The new extras, all made in 2018 and 2019, include “Mark of the Beast: The Legacy of the Universal Werewolf” feature-length documentary; “An American Filmmaker in London,” interview with Landis; “Wares of the Wolf: Artifacts from ‘American Werewolf in London’”; “I Think He’s a Jew – The Werewolf’s Secret” featurette; “The Werewolf’s Call,” a conversation between filmmaker Corin Hardy and writer Simon Ward; and a photo gallery.

Paul Davis’ commentary is especially interesting, beginning with his explanation of “American Werewolf’s” dedication to Jim O’Rourke. O’Rourke had been Clint Eastwood’s stuntman on “Kelly’s Heroes,” on which the 18-year-old Landis was a production assistant. Landis and O’Rourke became great friends and traveled around Europe together, including to that funeral in Yugoslavia. He went on to produce Landis’ first feature, “Schlock,” and encouraged him to make “Werewolf.” Sadly, O’Rourke died of lung cancer in 1981, right before Landis began shooting the film. Davis also notes that the opening shots on the moors (which were in Wales, not England), was originally cut to Cat Stevens’ “Moon Shadow,” but by then Stevens had become a Muslim and refused to grant the rights.

The wolf howls David and Jack hear on the moors were made by recording an elephant’s trumpet and playing it backwards; that same effect was used in Michael Jackson’s “Thriller,” which Landis produced and directed. Davis jokes about Frank Oz, who had been in London to make “The Muppet Movie,” playing a guy from the American Embassy, who arrives at the hospital to tell David that Jack is dead: “You know when you’re about to be delivered news by Fozzie Bear, that it isn’t going to be good!” Davis comments on the dream sequence in which David and his family are attacked by Nazi demons, and how it stemmed from Landis’ fears “as a Jewish kid growing up and hearing about the Holocaust.”

Davis describes a lot of the technical aspects of the film, and has loads of enjoyable trivia about scene after scene, such as that none of the knickknacks in Alex’s apartment, which included various Disney characters and movie posters, had been cleared by the legal department; or how depressed Dunne became by having to wear so much make-up and prosthetics. He described the sensation he got from one of his masks as “like being eaten alive by ants.” Davis concludes by declaring “American Werewolf” “a benchmark of horror and comedy” that “will outlive all of us … Landis hit a home run.” 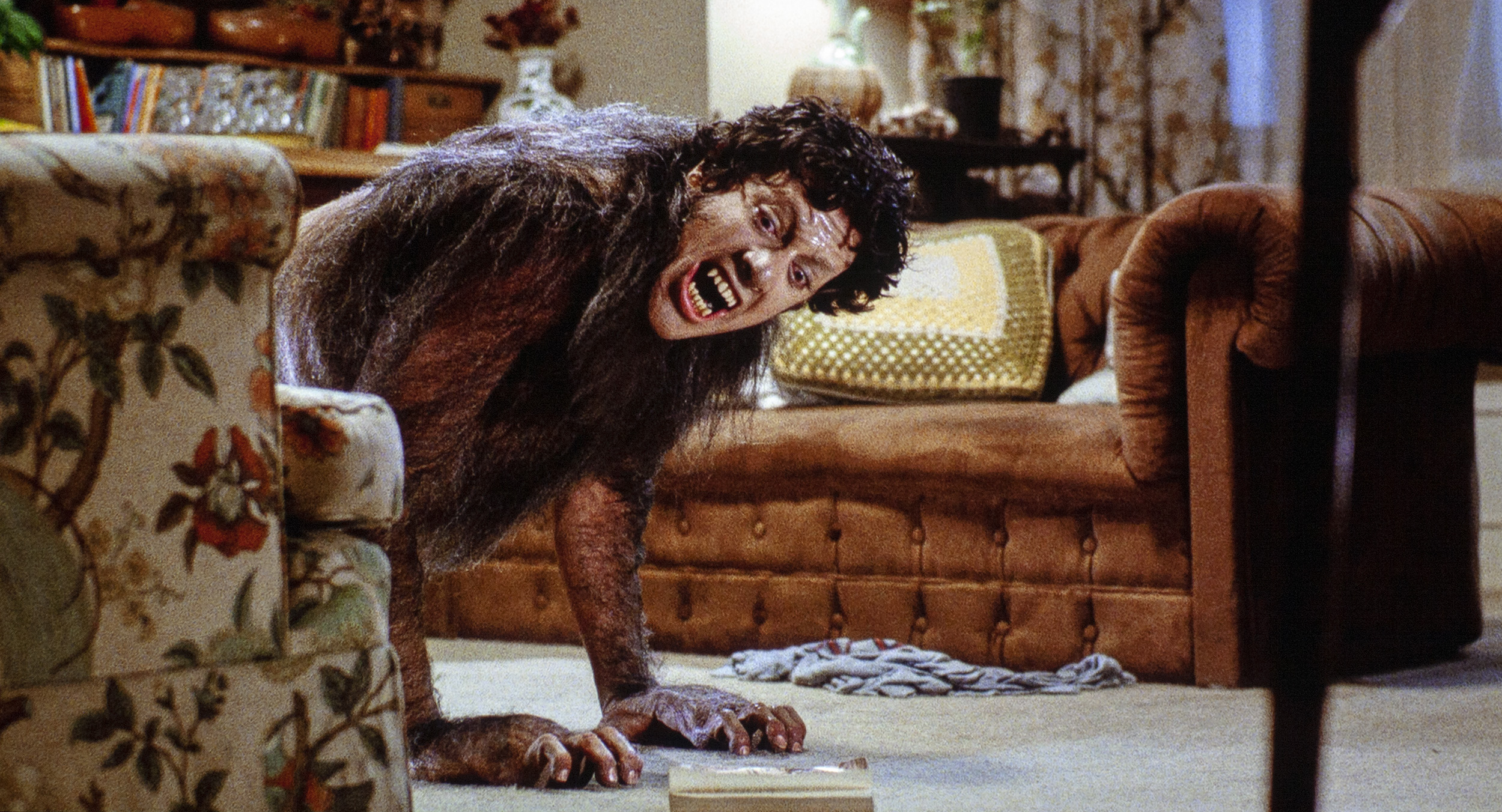 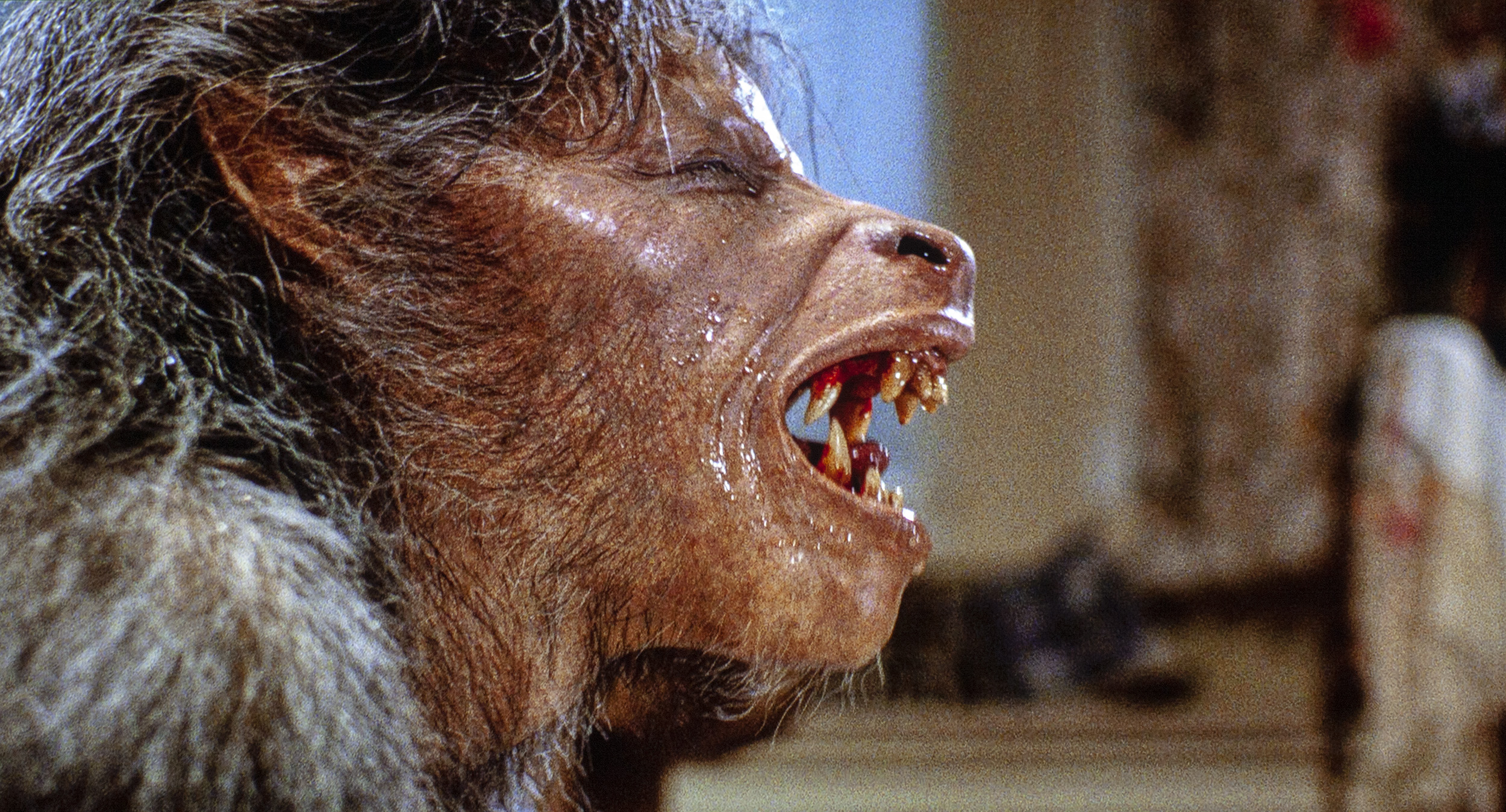 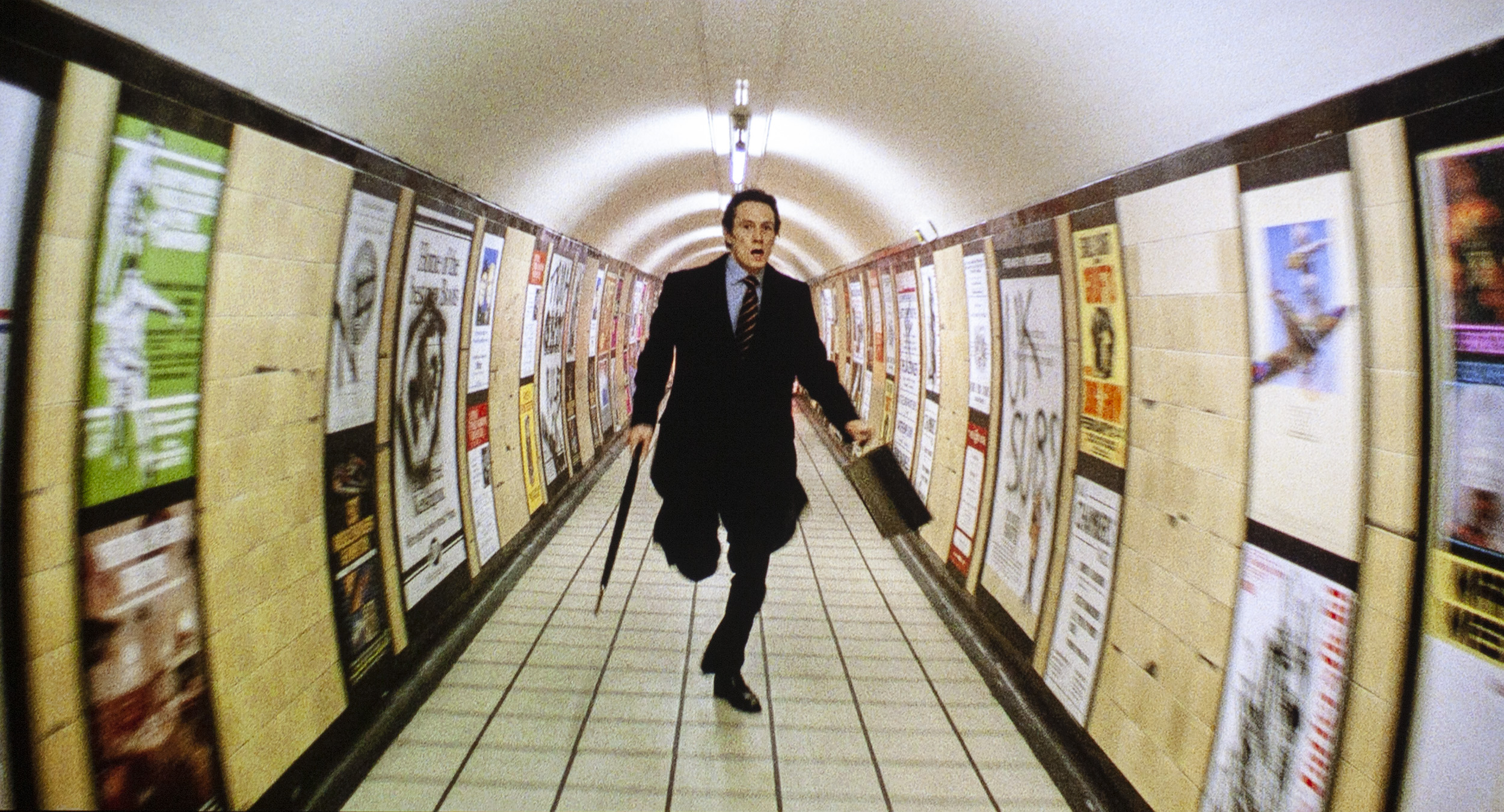 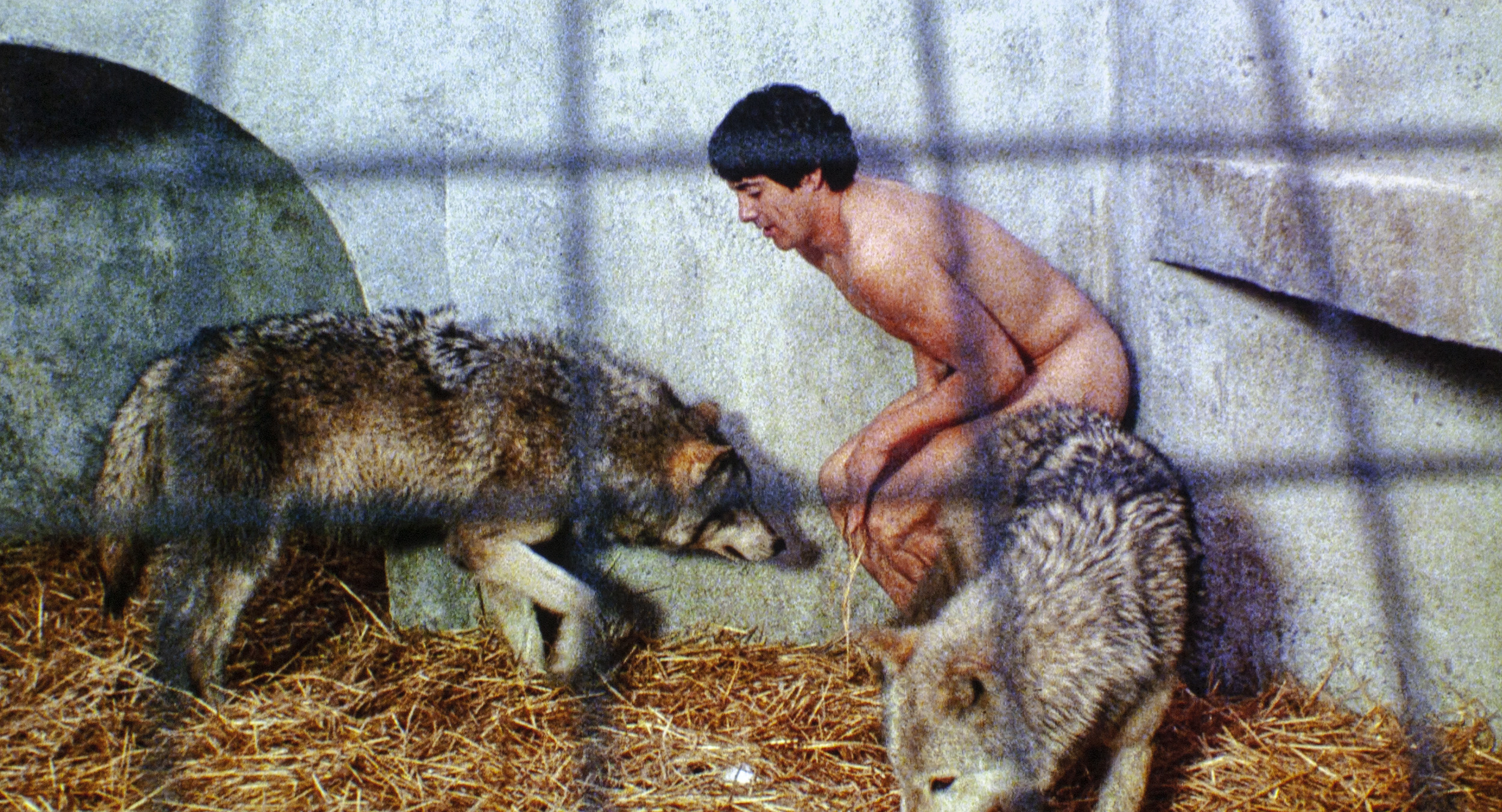 (1&2) David's first change into a werewolf at Alex's flat. (3) That night he claims six victims including Gerald Bringsley inside a tube station. (4) He awakens inside the wolves' den at the London Zoo. 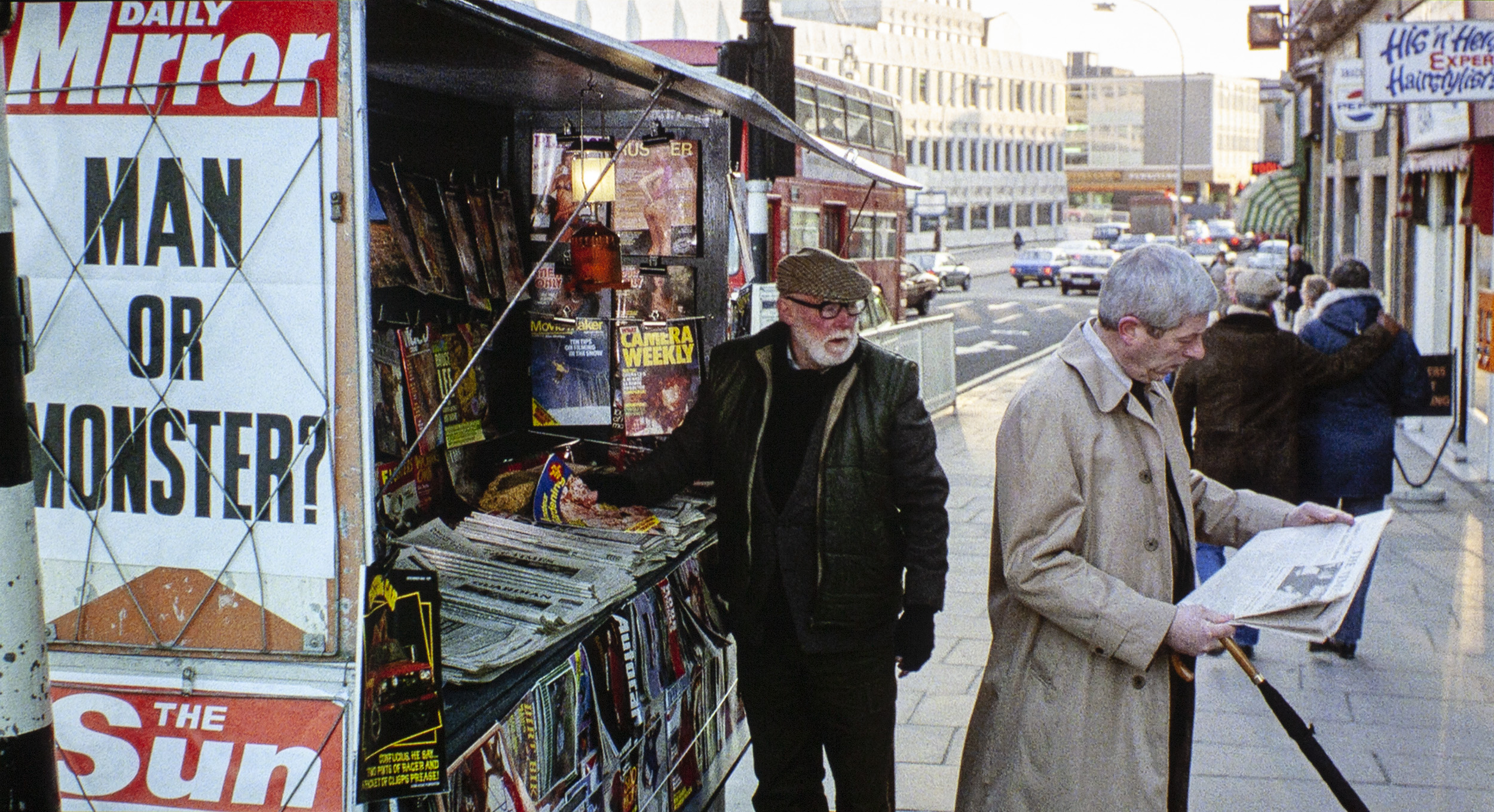 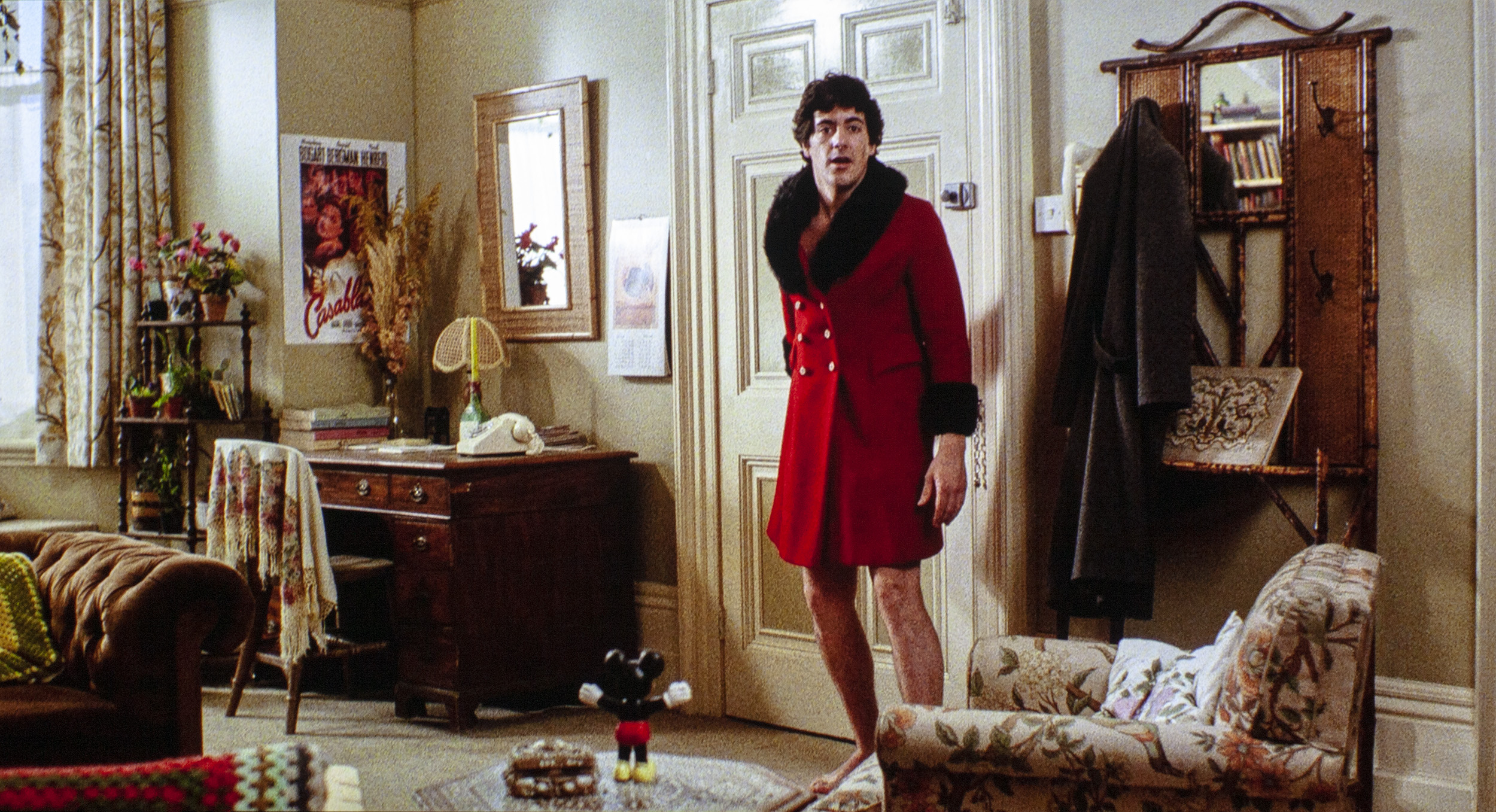 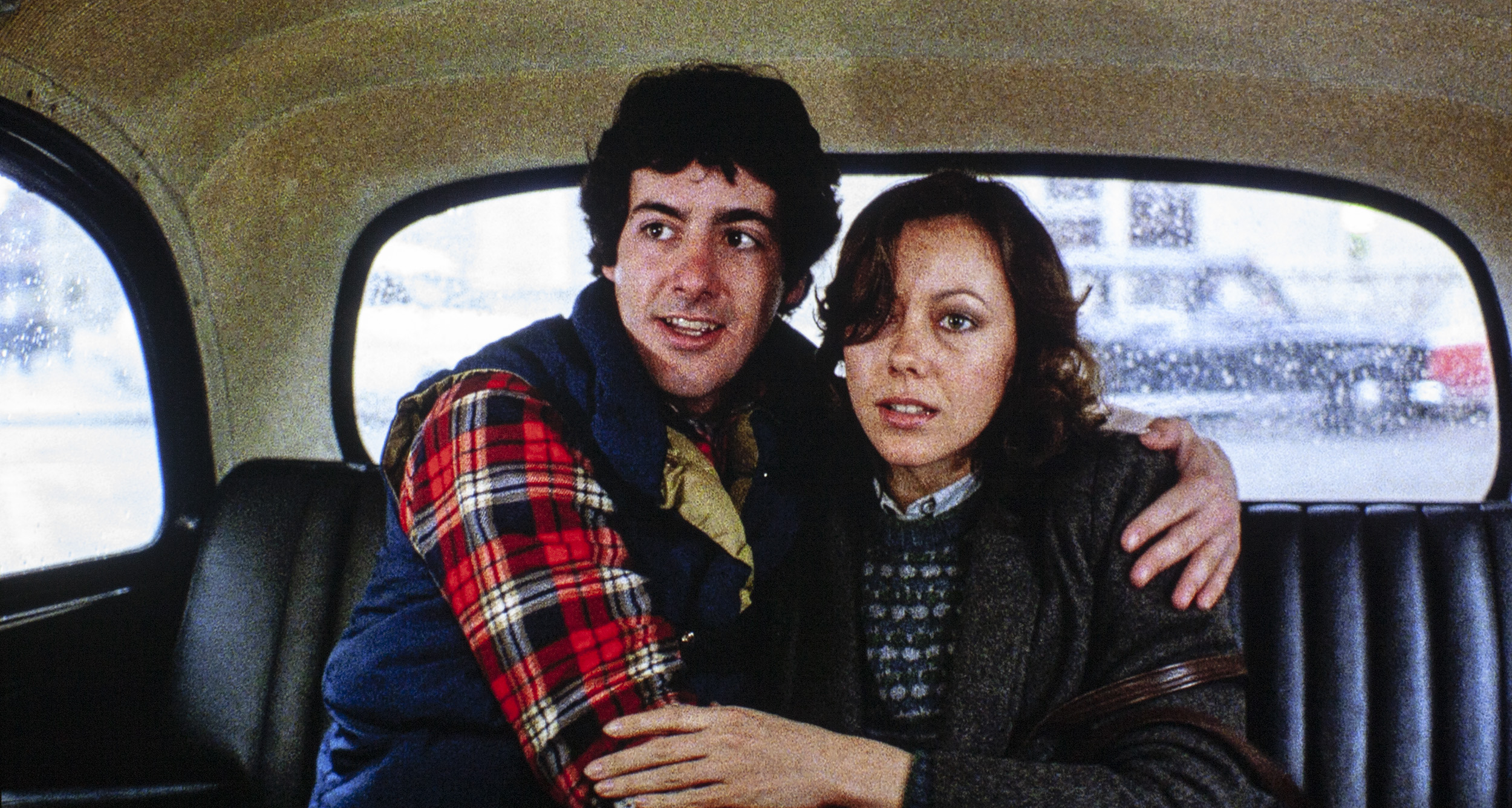 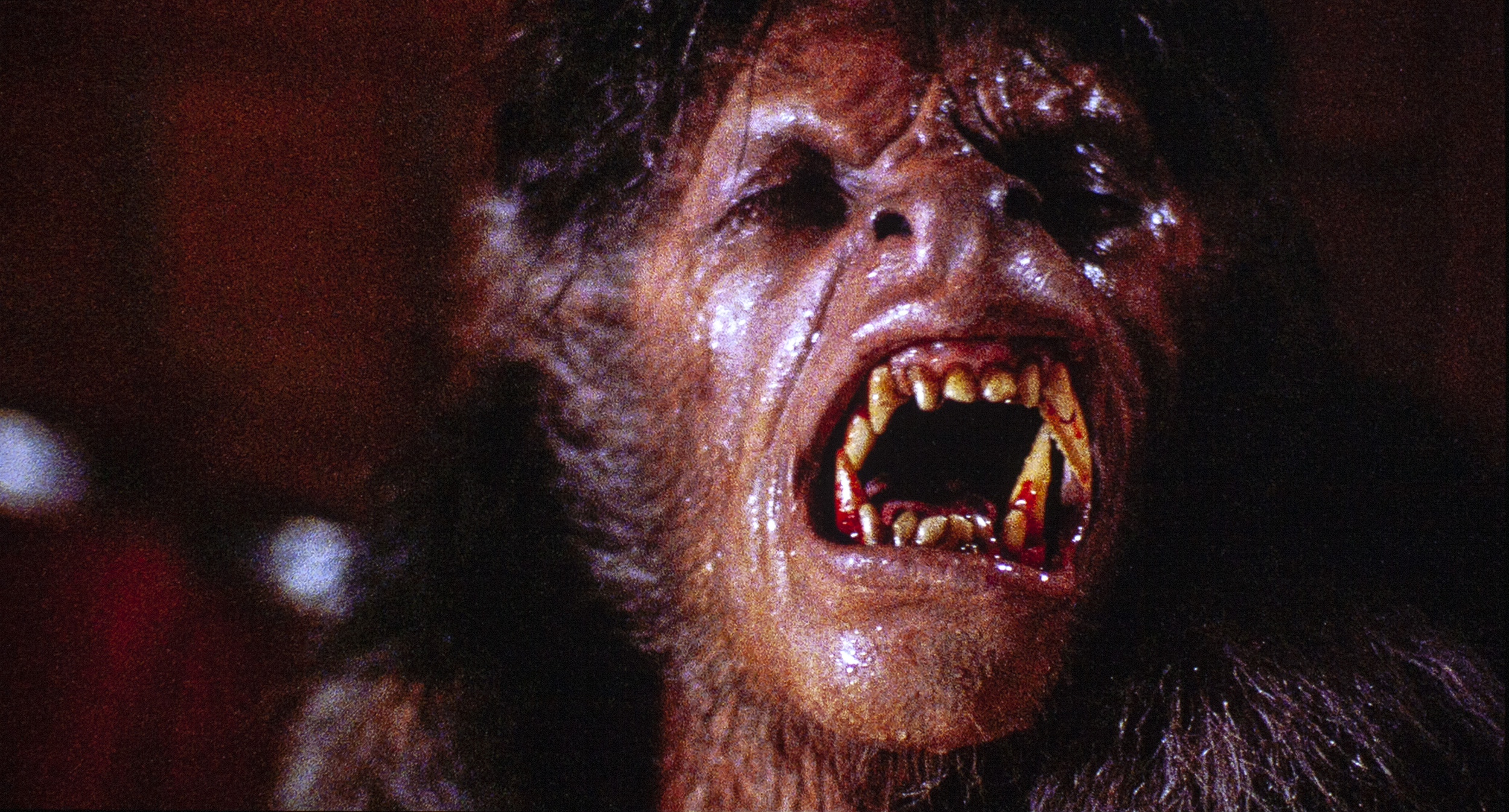 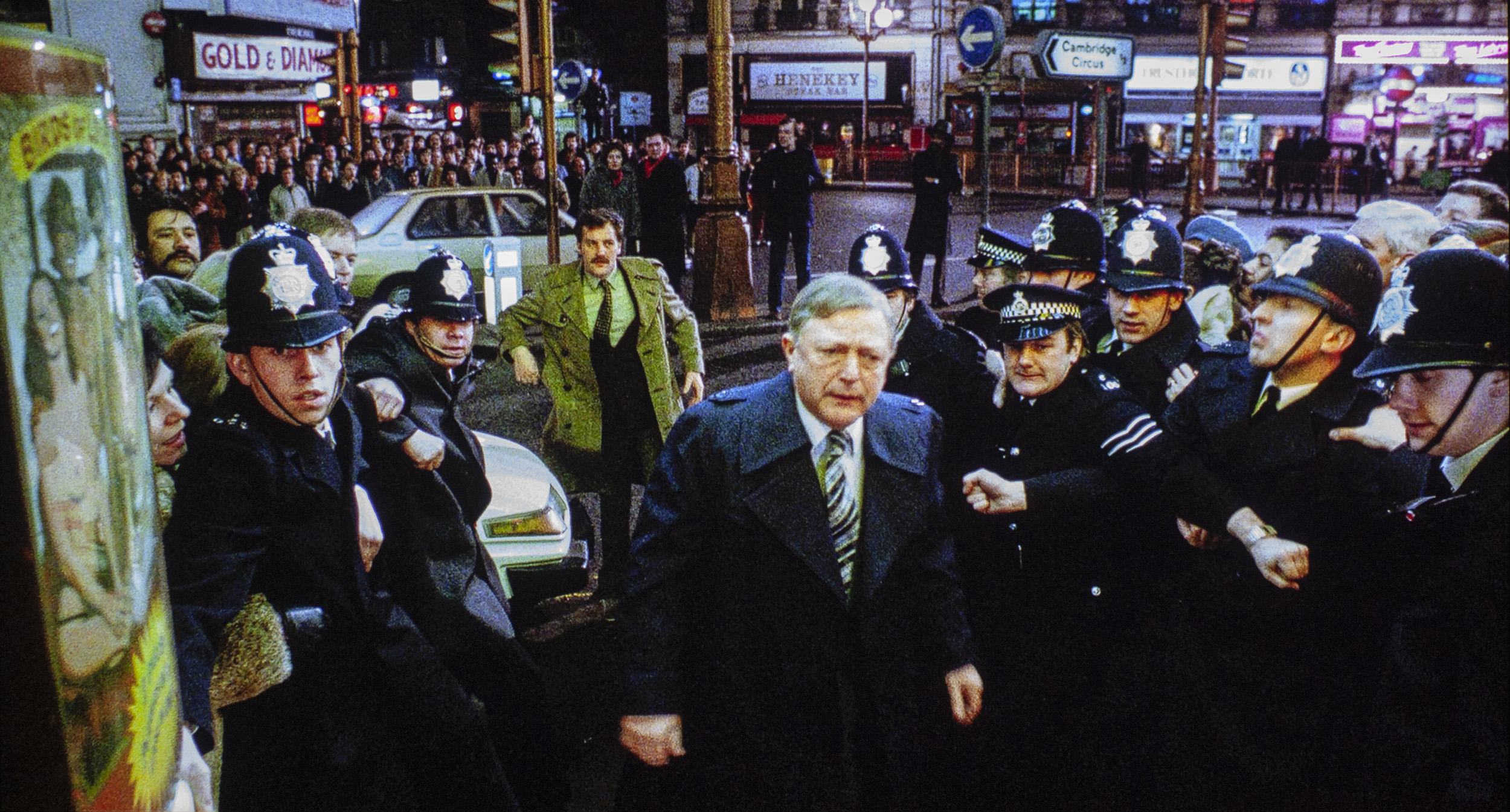 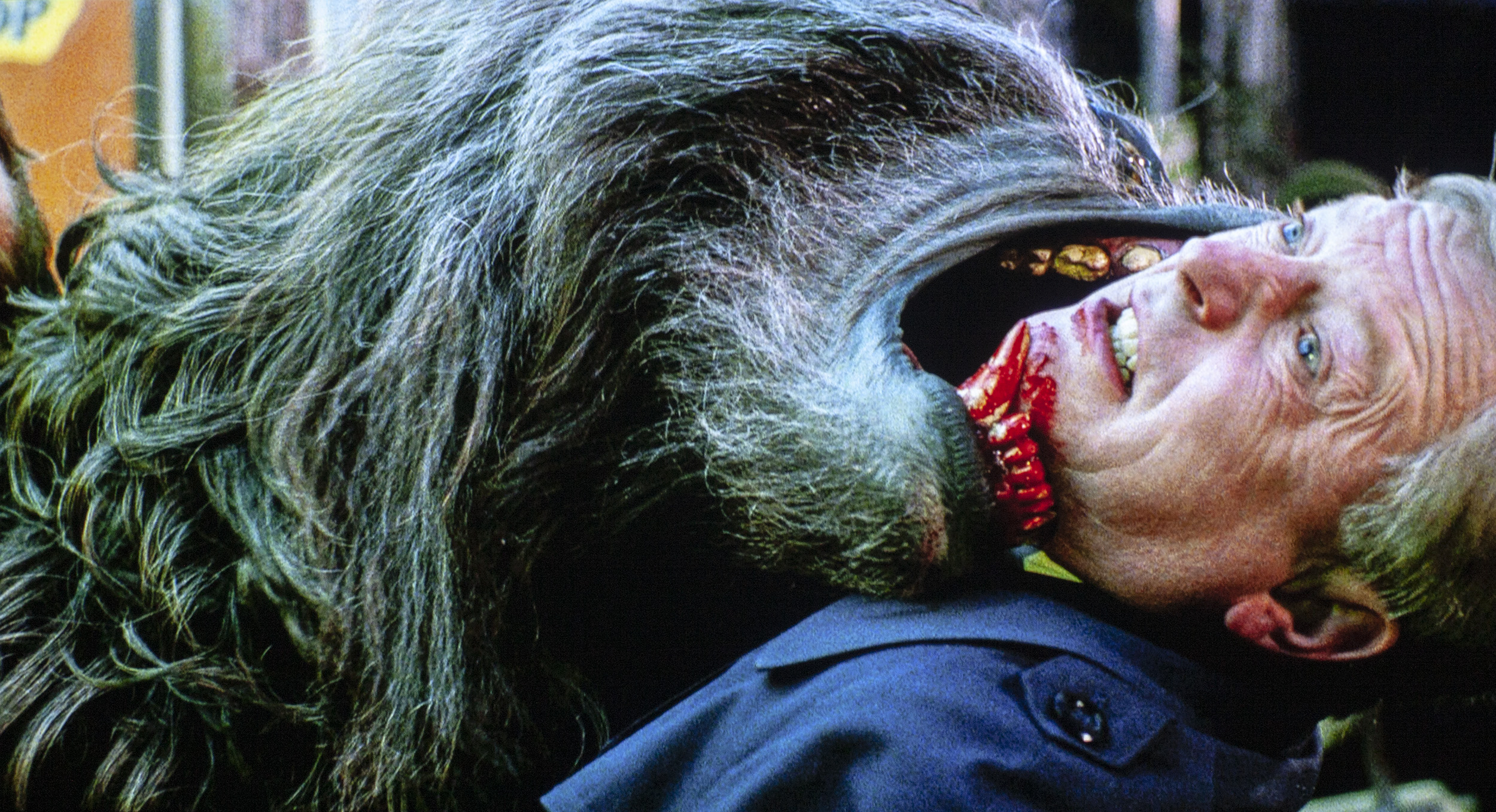 (1) Newspapers report the night's violent actions from a man or monster? (2) After awakening naked David steals a woman's coat and arrives at Alex's flat. (3) David and Alex grab a taxi to return to St. Martin's to see Dr. J.S. Hirsch. (4) The moon rises again and David goes through the transformation for the second time. (5&6) Police authorities arrive at another violent scene where the werewolf has killed inside and outside the theater. 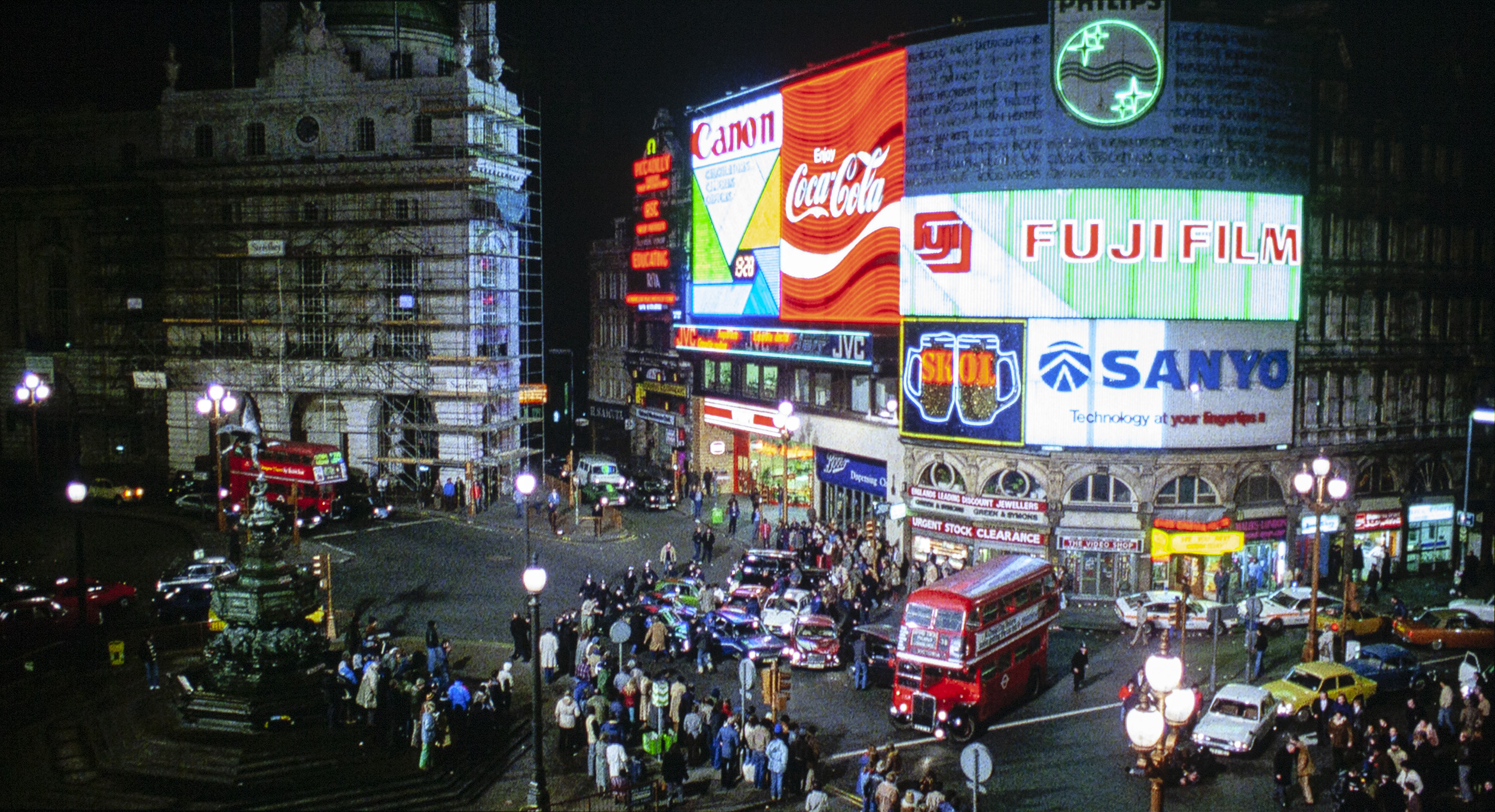 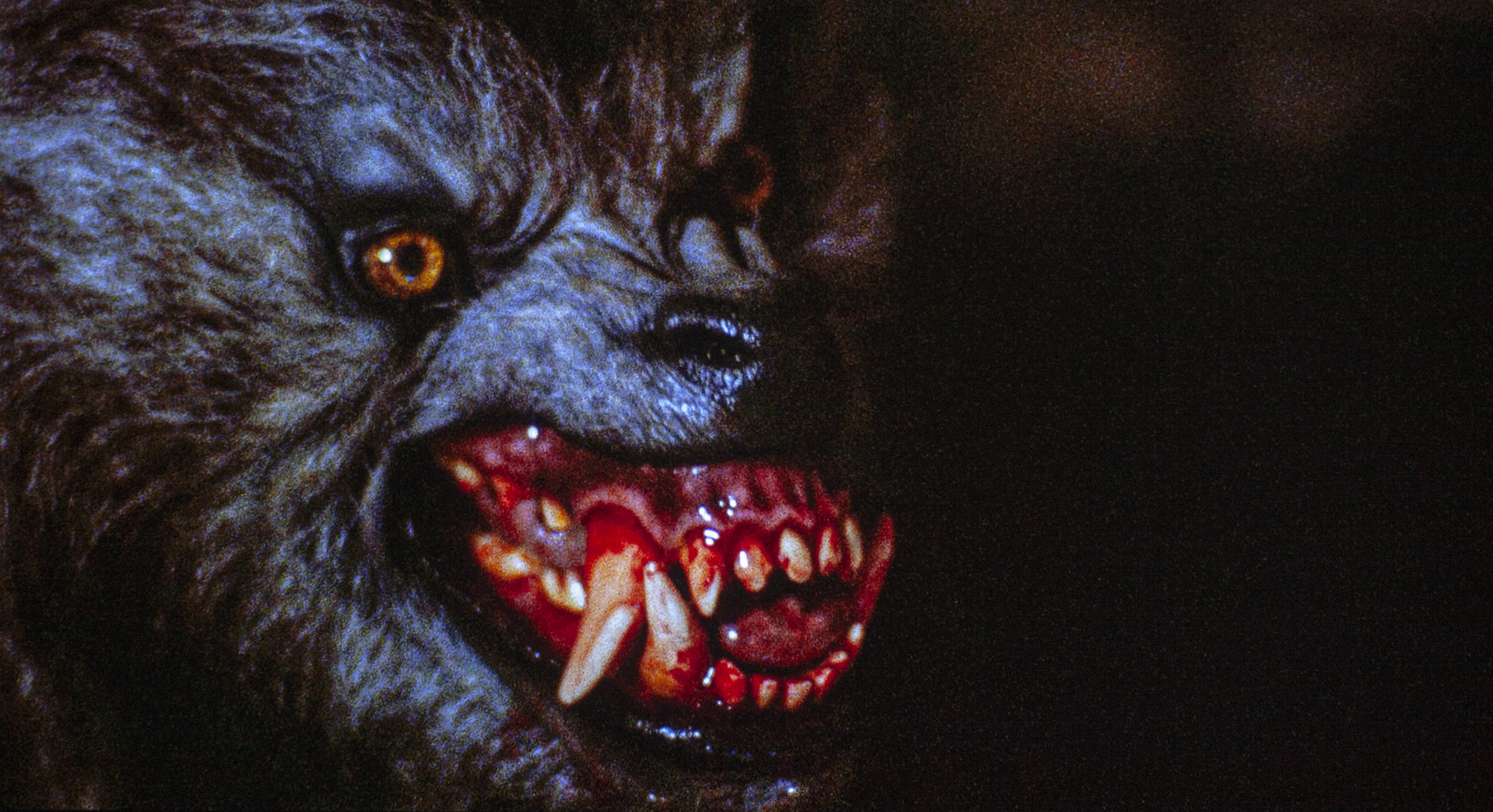 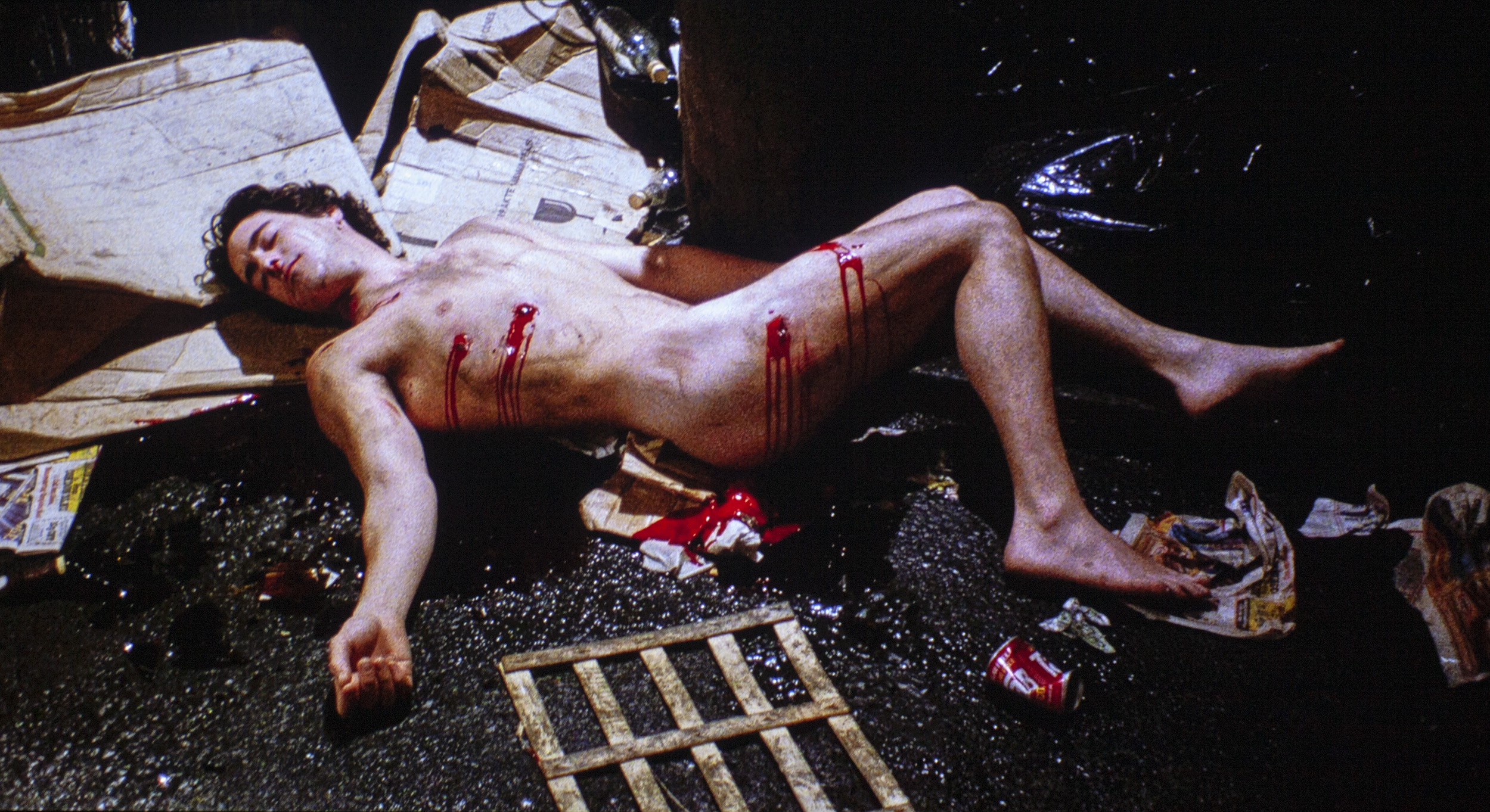 (1) Piccadilly Circus erupts into chaos. (2&3) The police trap the werewolf into an alleyway and Alex arrives and breaks through the police barricades. Seeing the werewolf and knowing its David she says, "I love you." Then the police open fire.