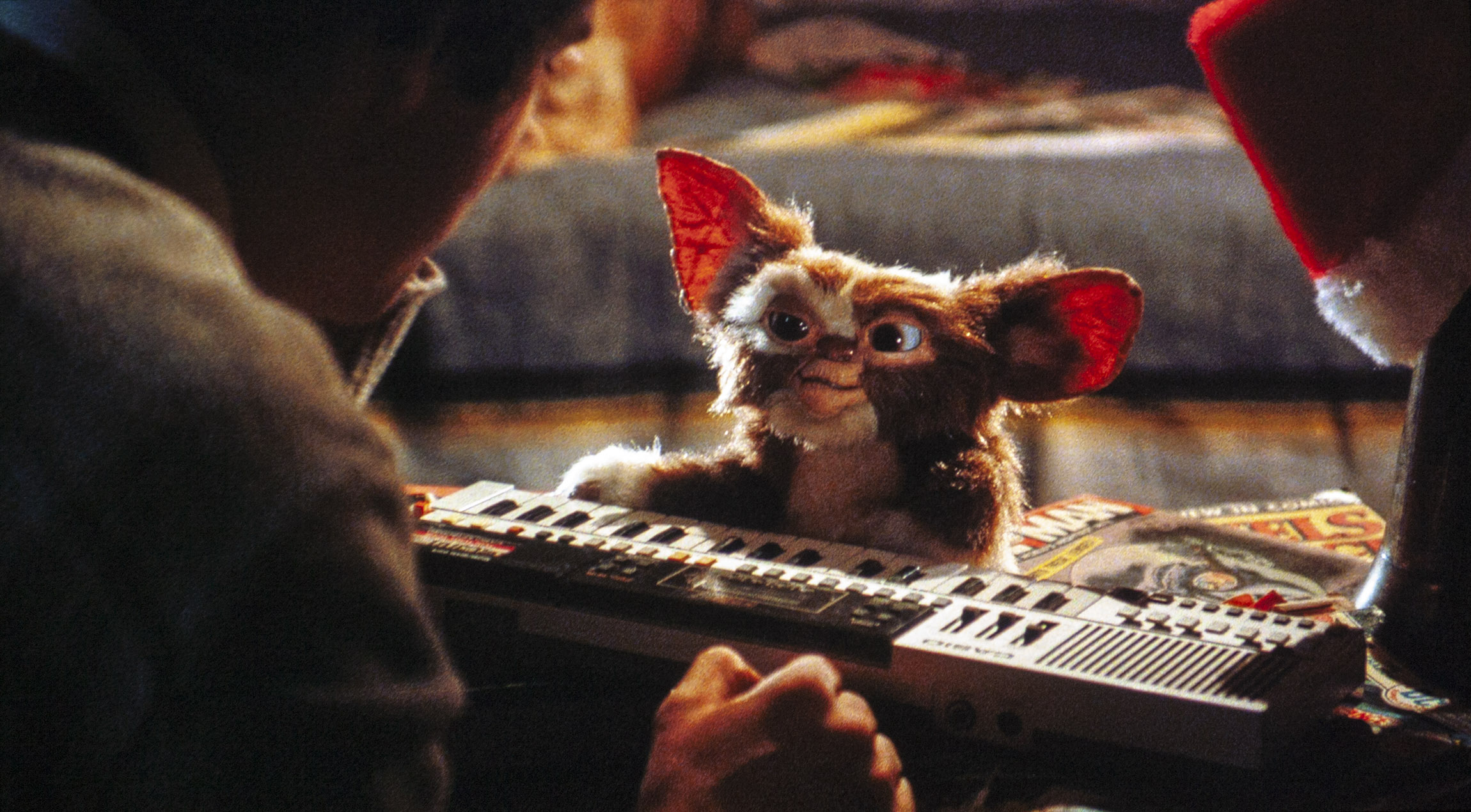 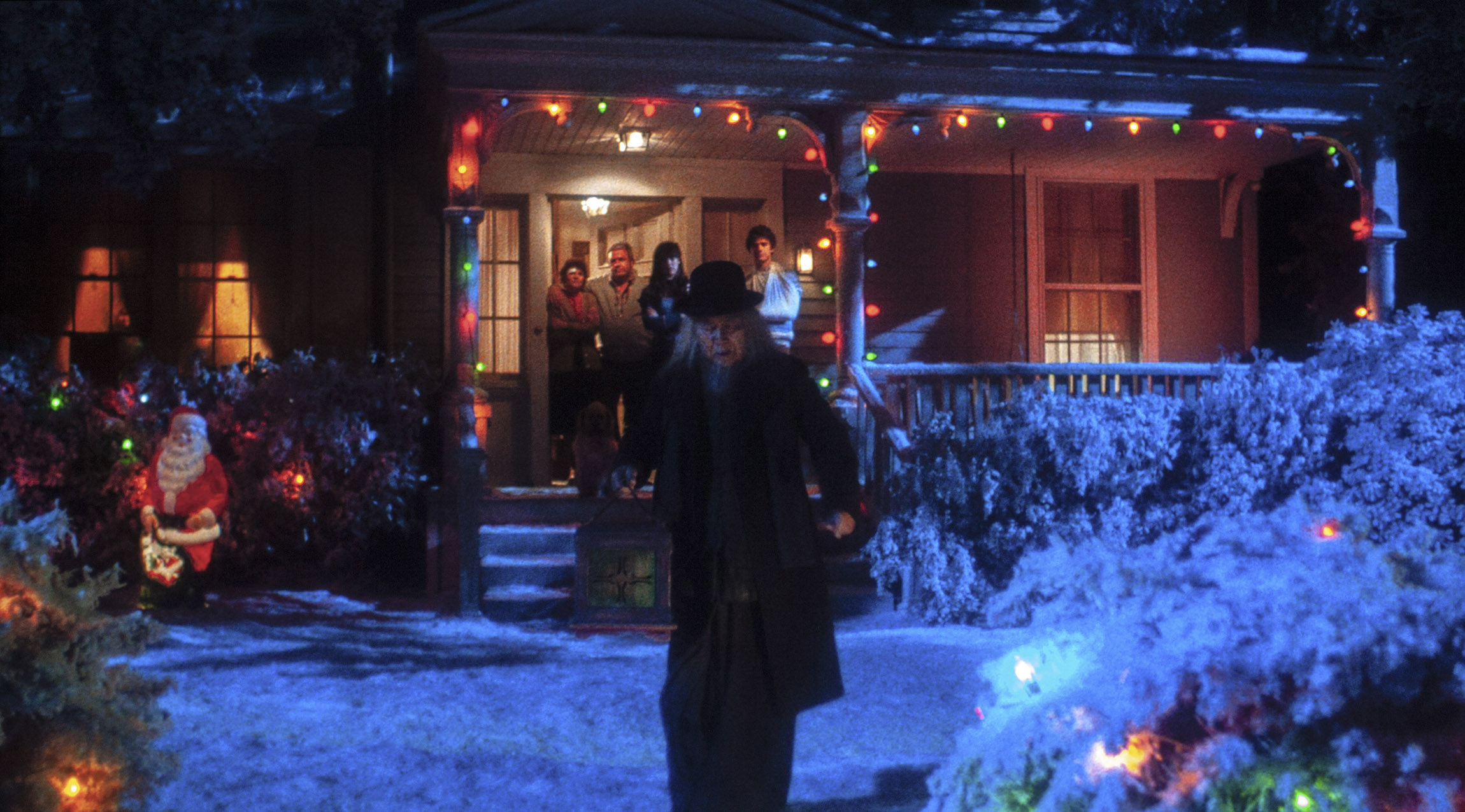 FOR ITS 35th anniversary, Warner Brothers gave horror-comedy “Gremlins” a true 4K remaster. That means we get a gift, too.

Director/producer Steven Spielberg and producers Frank Marshall and Kathleen Kennedy launched Amblin Entertainment in 1981: The mission – make a lot of movies. When writing samples and scripts began flooding their office, Spielberg took a bundle of 20 scripts home for the weekend.

He found “Gremlins” from a recent NYU film school grad, a story about a cute pet that accidentally hatches more of its kind. The offspring mushroom into hundreds and hundreds of devilish creatures that nearly destroy Kingston Falls, USA.

“I noticed the name. There are not many writers named Chris Columbus,” Spielberg says in “Cute. Clever. Mischievous. Intelligent. Dangerous,” a documentary included in the set and on digital platforms. At first, he wasn’t sure if the name was a “nom de plume…or whether [the author] was hiding his actual identity.” But reading the story was a dream come true. “It was like a candy store… a delightful piece of devilish comedy-horror, nothing like I’ve ever read before.”

Spielberg was so taken, he decided to buy “Gremlins."

Columbus remembers the day he got the call at his Manhattan apartment. His roommate answered and told him Steven Spielberg was on the line. “Don’t lie to me,” Columbus said. He picked up the phone to hear: “This is really Steven Spielberg… and I really loved the script.” Before the conversation was over, Columbus had been was invited to L.A. for a meeting; the rest, as they say, is history.

(1) "Gremlins" production was a modest $11 million, which forced director Joe Dante to filmed interiors on Warner soundstages and exteriors at Universal's famed Courthouse Square set, used a year later for "Back to the Future." (2-4) Inventor/salesman Rand Peltzer (Hoyt Axton) enters the lower level Chinatown shop looking to make a sale but leaves with a fuzzy little “Mogwai,” a Christmas gift for his son Billy.

The genesis of “Gremlins” began when a mouse entered Columbus’ apartment one night as he slept. “I woke up with a mouse sort of brushing by my hand,” he said. “My biggest fear was to find one nibbling on my fingers.” He began to wonder if there might be anything more frightening than that little critter. The first time he heard the word “gremlins” was from his father, who described them as tiny demons that caused the family car to break down. “That idea of gremlins causing mayhem really started the whole writing process,” says Columbus.

The film opens when hapless inventor/salesman Rand Peltzer (Hoyt Axton) buys a fuzzy little “Mogwai” at a mysterious shop in Chinatown. “Grandfather” Mr. Wing is played by Keye Luke, who years earlier was Charlie Chan’s No. 1 son during the 1930s film series. The pet, renamed “Gizmo,” is a Christmas present for Rand’s 20-year-old son Billy (Zach Galligan) who works as a bank teller. Billy has an enormous crush on co-worker Kate Beringer (Phoebe Cates, “Fast Times at Ridgemont High”), who hates Christmas. The mogwai comes with a set of instructions: Keep it away from bright light, don’t get it wet, and especially don’t feed it after midnight. “Mogwai” means “devil” in Chinese.

As a student, Columbus spent a lot of time in New York’s Chinatown, the perfect place to pick up a cheap dinner or lunch. He recalls how it was full of small side alleys and shops that sold things that couldn’t be found anywhere else. His first draft was a hard-R rated horror film, with the adorable mogwais, fed after midnight, turning into horrible gremlins. Billy’s mother is decapitated, her head rolling down the stairs; the little devils go into a feeding frenzy at McDonald’s rejecting hamburgers for customers. “It was dark and twisted,” Columbus says. At first, he didn’t realize Spielberg planned to make it, “more audience-friendly while keeping its satirical edge.” 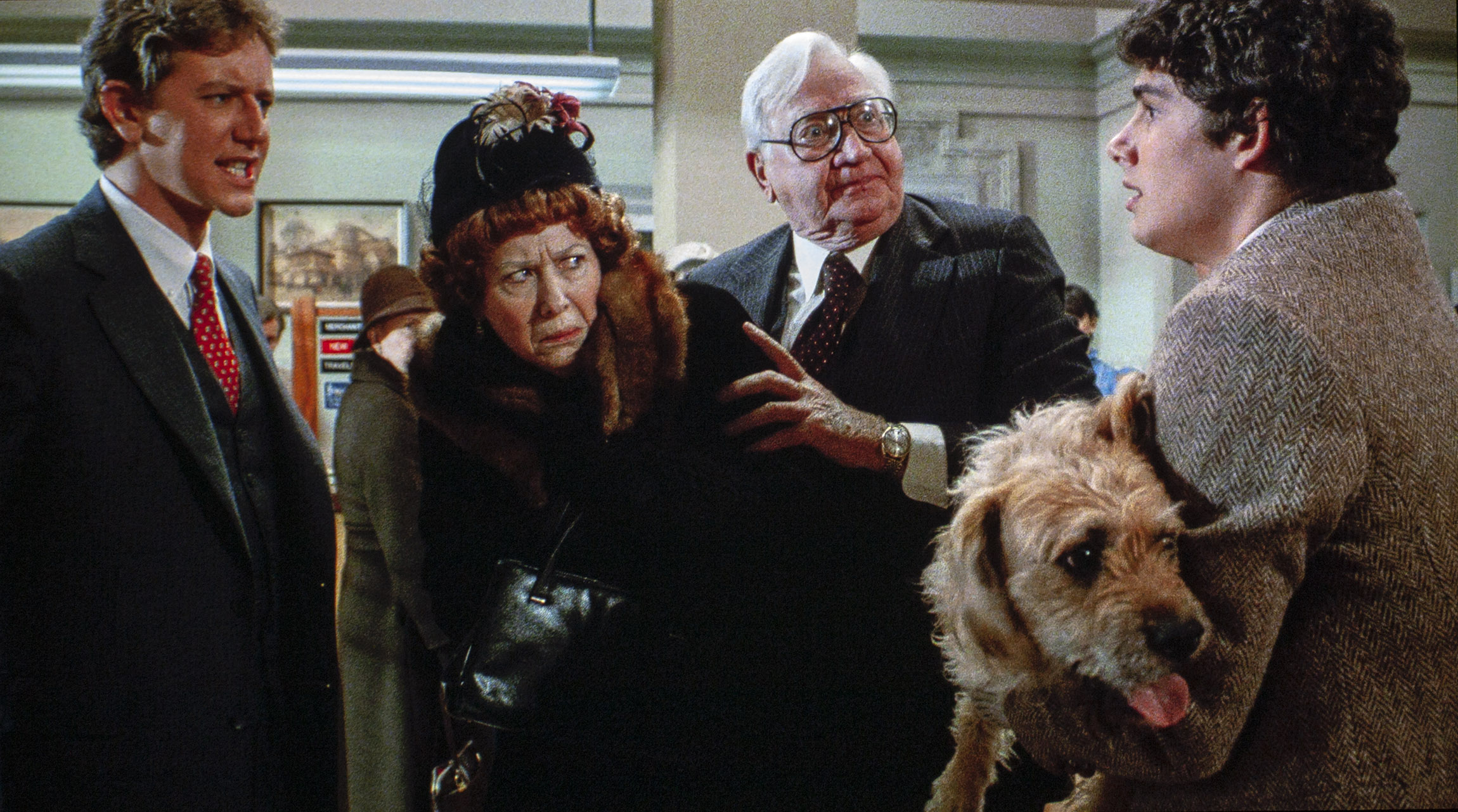 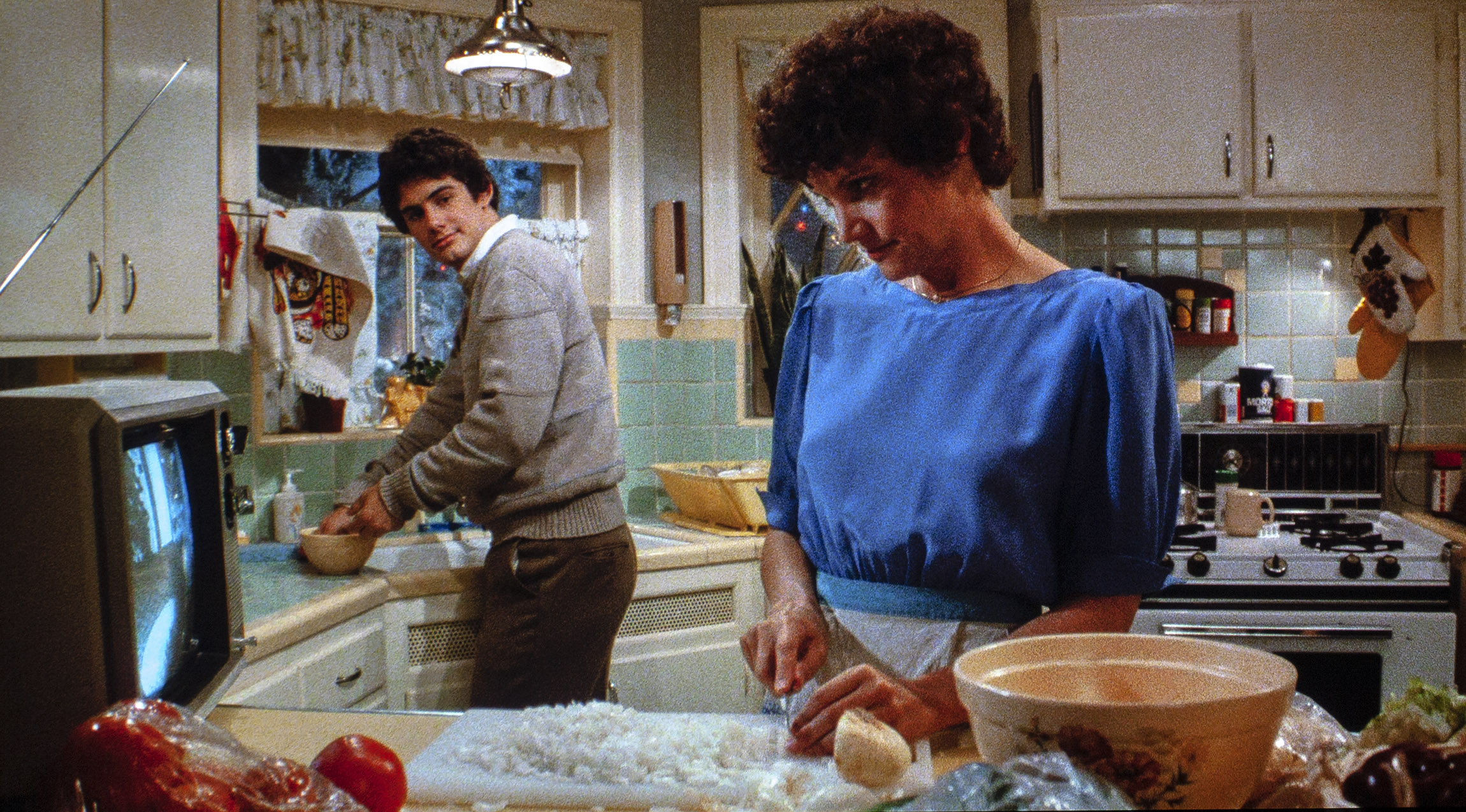 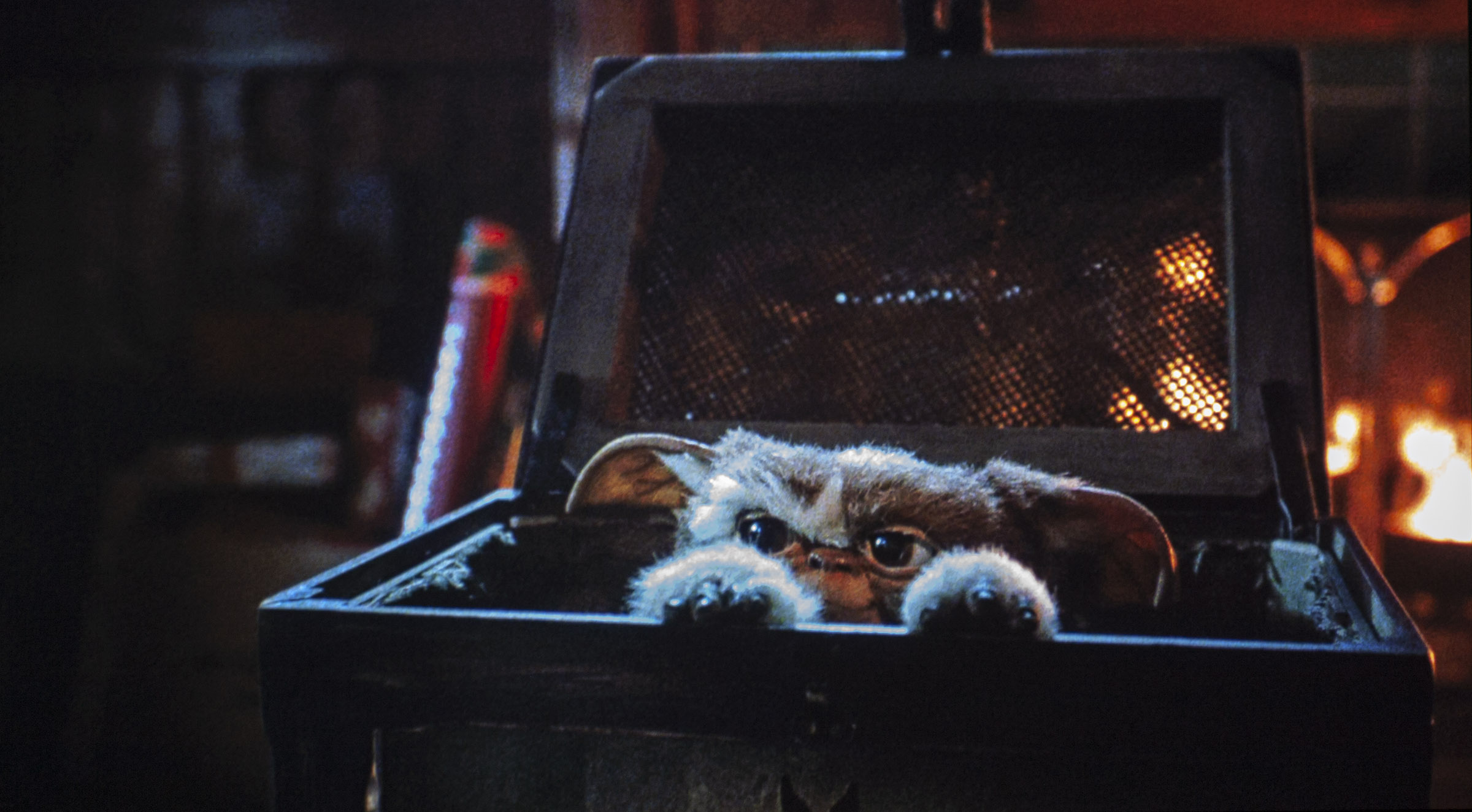 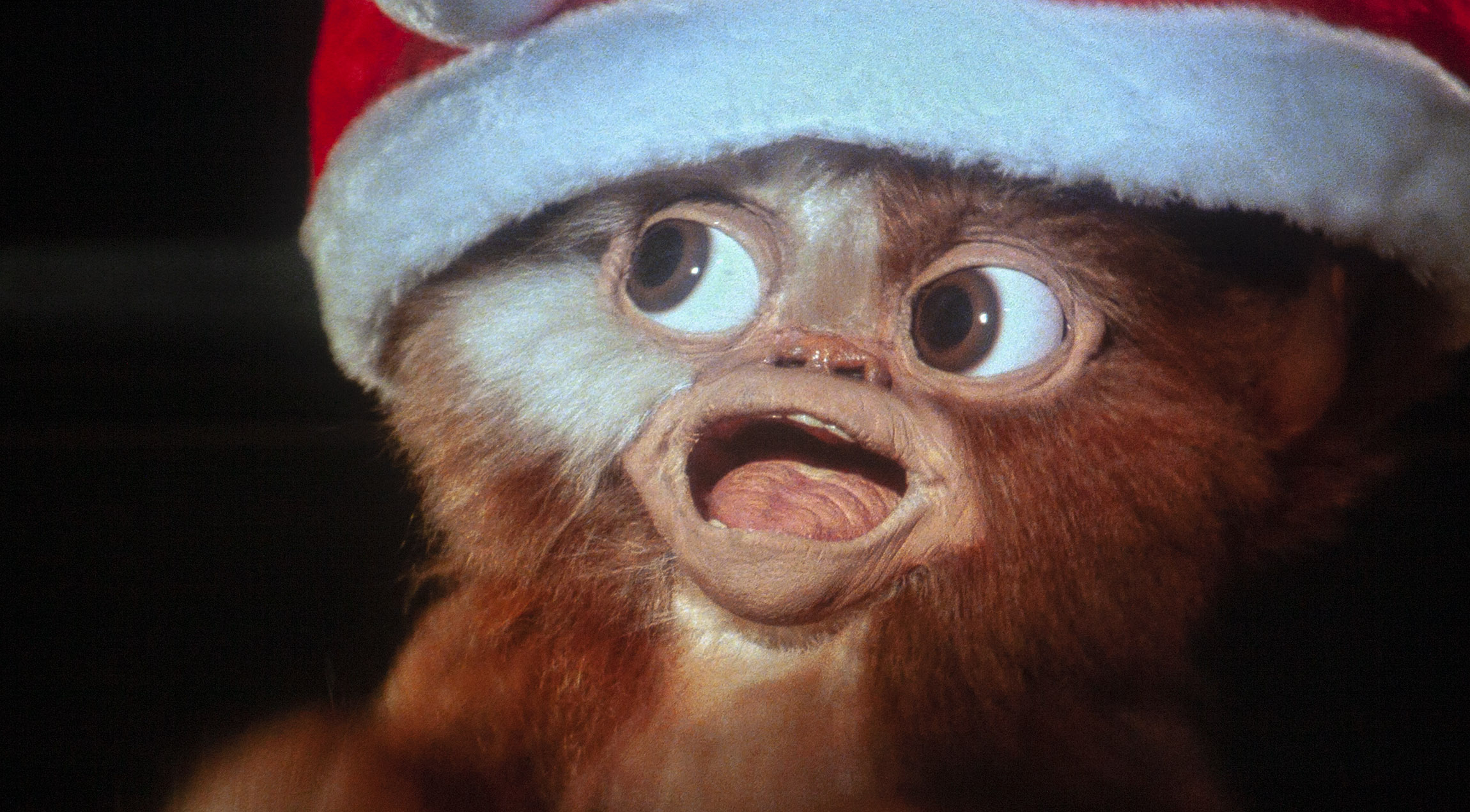 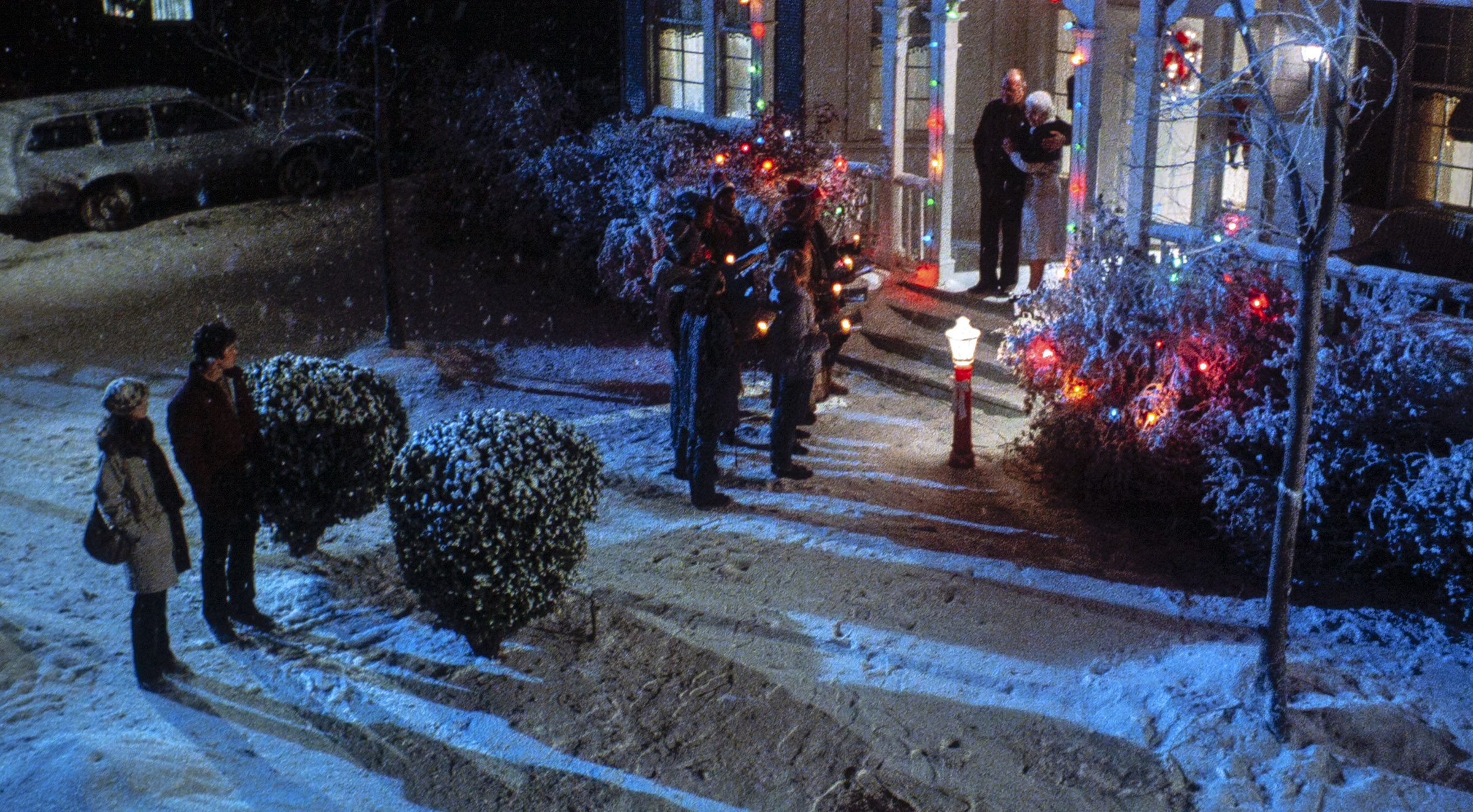 (1) Right, Billy Peltzer (Zach Galligan) brings his dog Barney to work at the Union Saving and Trust bank, where customer and neighbor Rudy Deagle (Polly Holliday) demands his dog. She thinks Barney destroyed her outdoor snowman and Barney jumps over the counter and bites Mrs. Deagle. Left, Junior Vice President Gerald Hopkins (Judge Reinhold), tells Billy, " Peltzer, this is a bank, not a pet store." (2) Lynn Peltzer chops some onions while watching "It's a Wonderful Life." (4) Billy opens the Christmas gift and Gizmo pops from the wooden box. (5) A Christmas hat on Gizmo. (6) Billy and Kate Beringer walk home on Christmas Eve as carolers sing in front of a home. 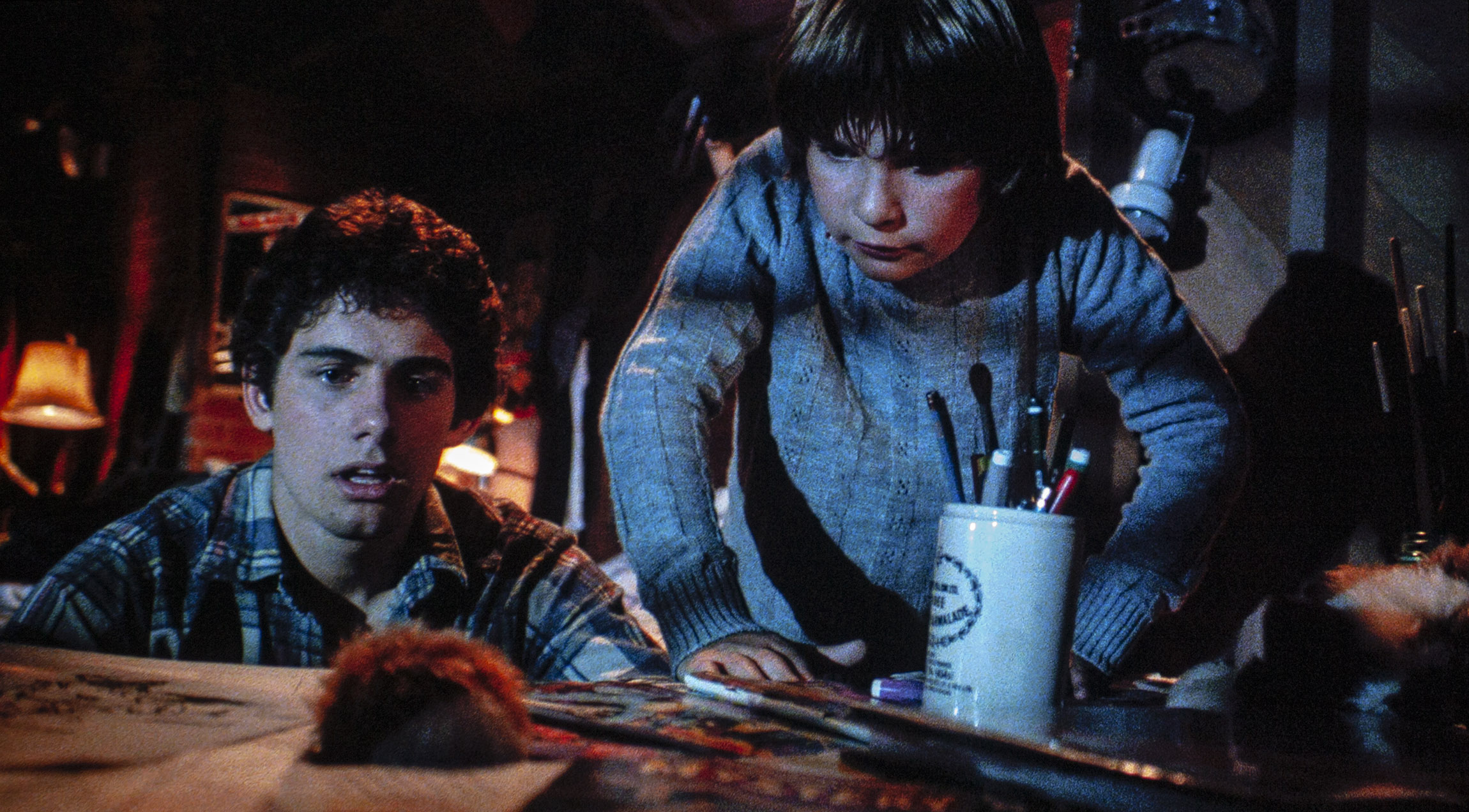 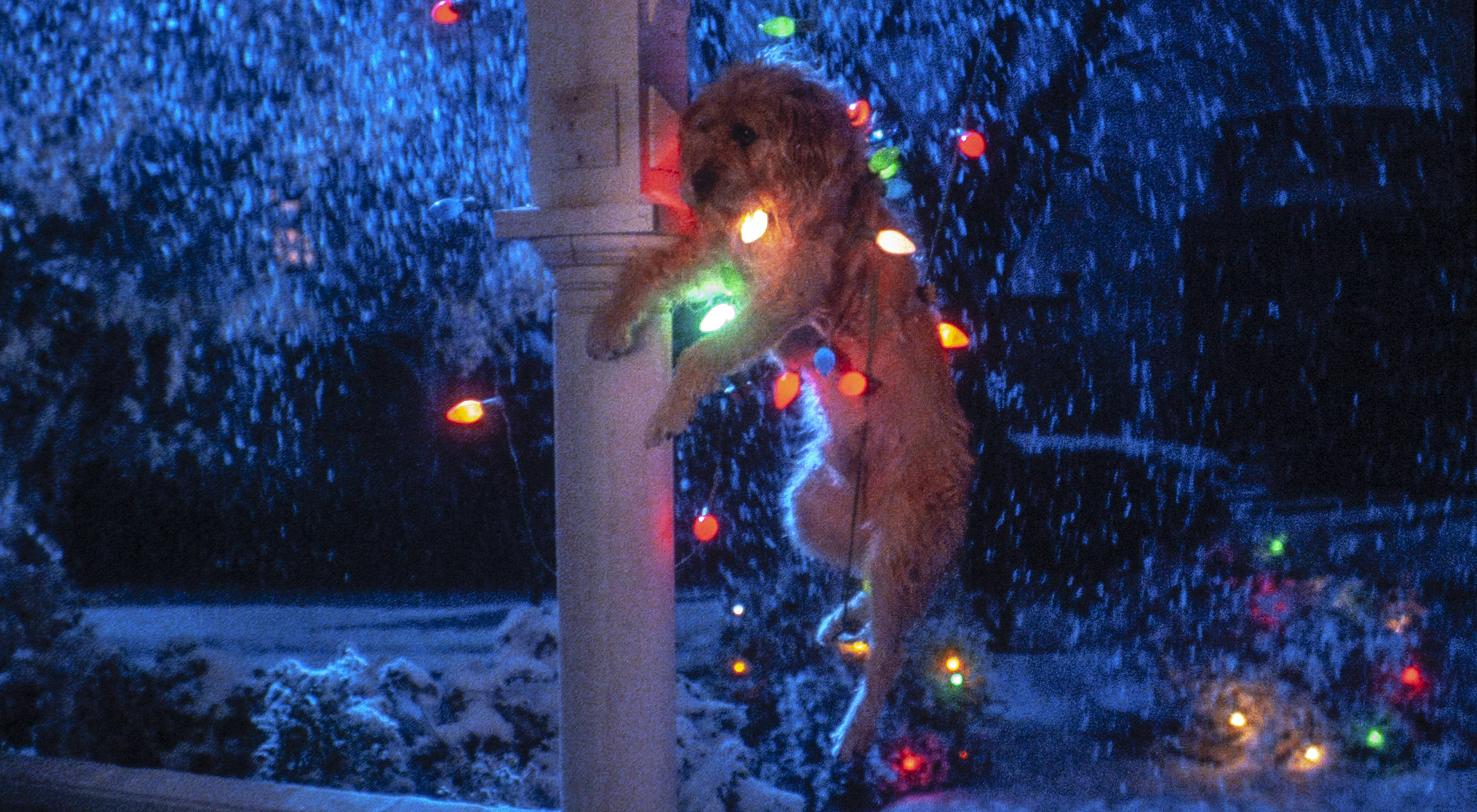 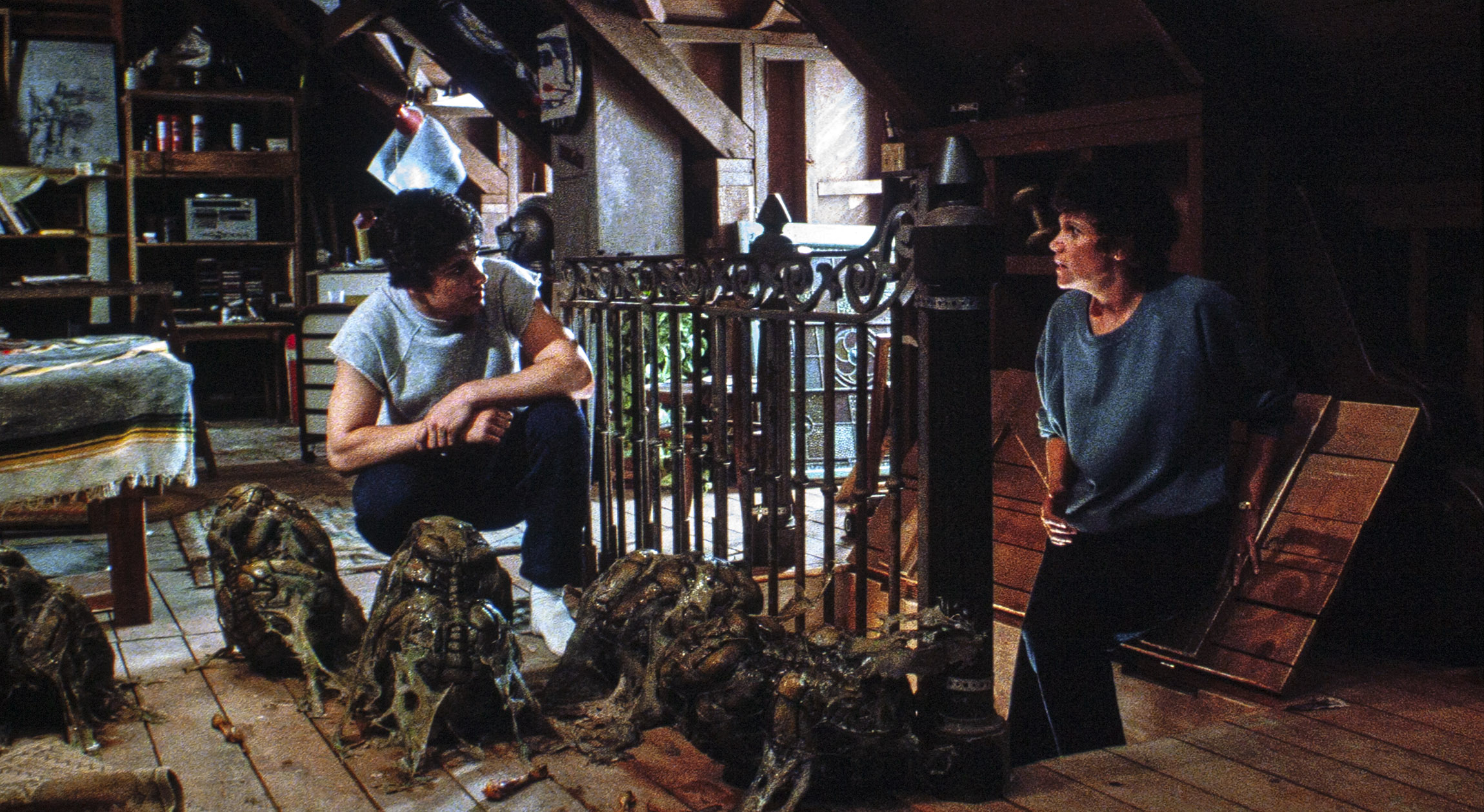 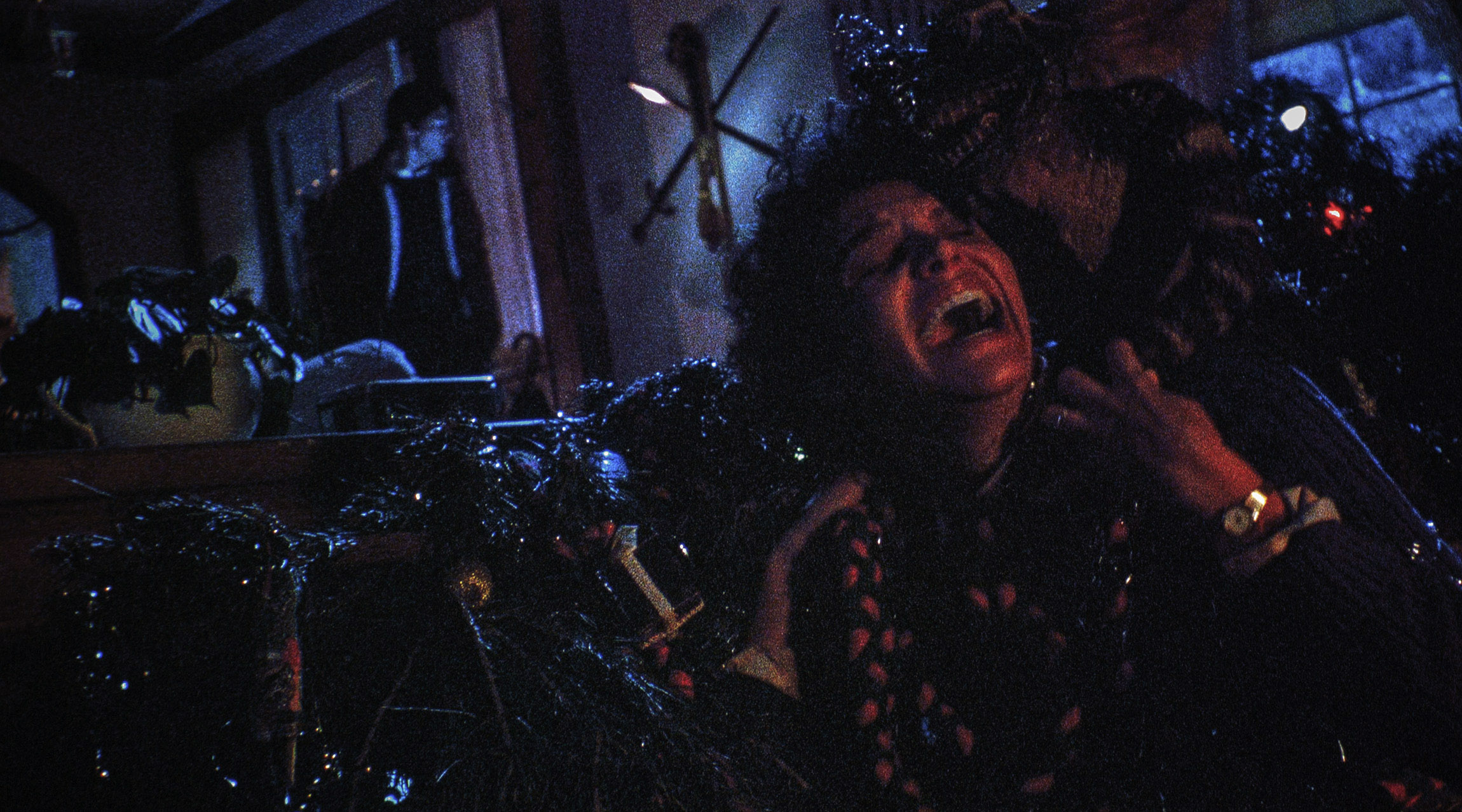 (1) Neighborhood friend Pete Fountaine (Corey Feldman) accidentally spills water onto Gizmo, which leads to five mogwai offsprings. (2) The next night Barney is mysteriously hanging from the Christmas lights. (3) Five pods are discovered in Billy's bedroom after he feeds the mogwai offsprings after midnight. It's like a scene from the sci-fi classic "Invasion of the Body Snatchers." (4) The next day the gremlins start their mayhem and nearly kill Mrs. Peltzer.

His agent had sent the script to nearly 50 producers hoping it would stick; it was rejected by everyone until Spielberg got his hands it. “Gremlins” became the launching point for Columbus who quickly became one of Hollywood’s top young talents writing “Young Sherlock Holmes” and “The Goonies” for Amblin. He also became a successful director helming “Home Alone,” “Mrs. Doubtfire,” and the first two “Harry Potter” films “The Sorcerer’s Stone” and “The Chamber of Secrets.”

During the illuminating commentary included on the 4K disc and digital, director Joe Dante says Spielberg had always intended to tone down the violence, and wanted to make it “on the cheap.” He agrees the original script was diabolical, but says, “That’s what led Spielberg to me to direct since I had done ‘The Howling’ (1981).” The production had its challenges, especially creating the gremlins by effects artist Chris Walas, also included on the commentary. Spielberg got Warner to budget $11 million, but they kept the film on standby for some time. In the meantime, Dante joined Spielberg to direct one of the sequences in the “The Twilight Zone: The Movie” (1983).

Producer Michael Finnell, also featured in the commentary, describes gremlins as a term used by American WWII pilots. Based on Germanic folklore, they’re mischievous little creatures who tinker with machinery – like planes – to make them crash. Warner Brothers actually made an eight-minute Bugs Bunny cartoon, “Falling Hare” in 1943, using them. The cartoon gremlins had long, horizontal ears, which Walas adapted for his creation. Robert Clampett, who directed “Falling Hare,” visited the cast and crew of “Gremlins” to show his cartoon, and then led a campaign to have it shown before the feature film in theaters, but the studio scratched it.

A second commentary track has Dante and cast members, Galligan, Cates, and Dick Miller, who plays WWII vet Murray Futterman. There are four more featurettes and a photo gallery. 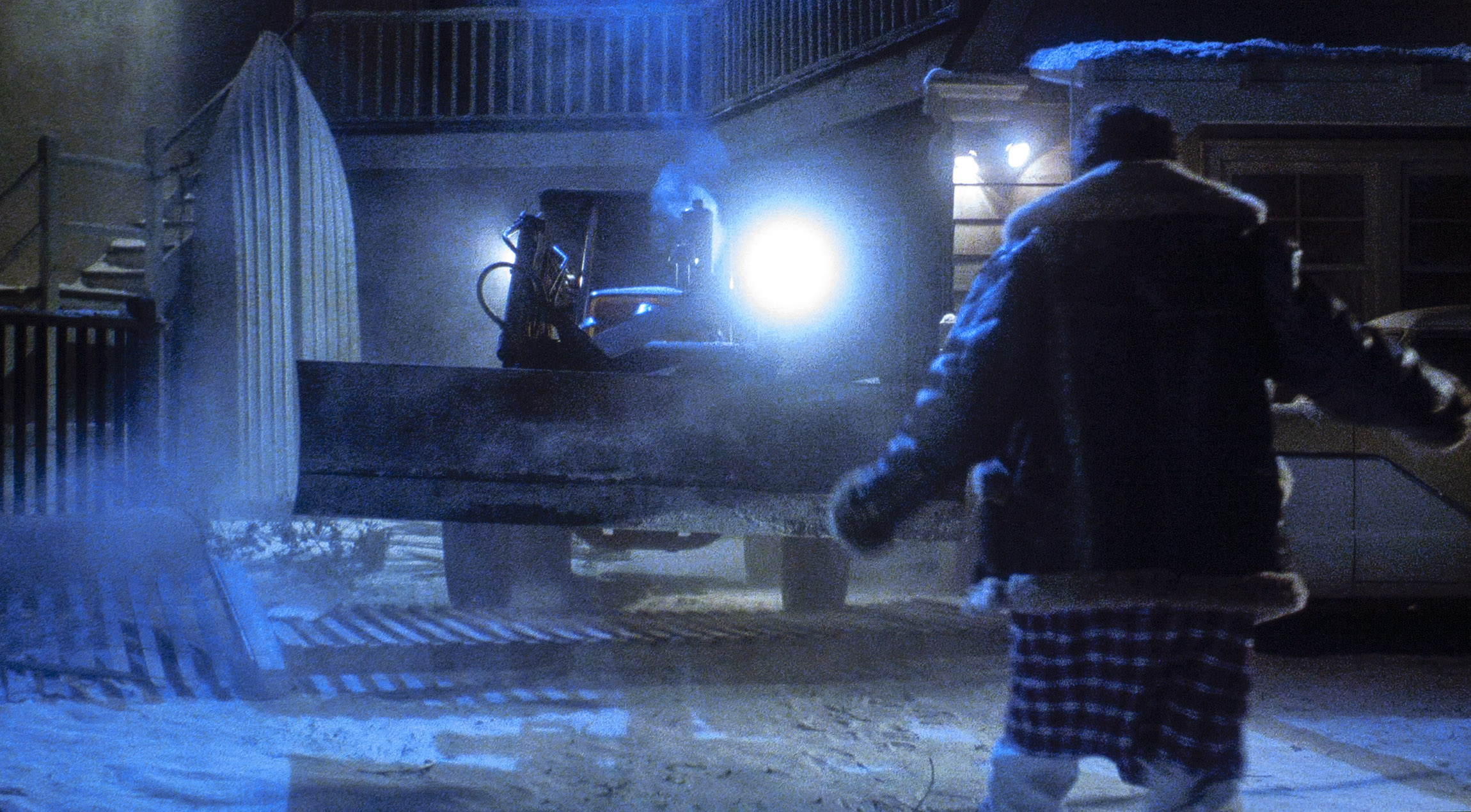 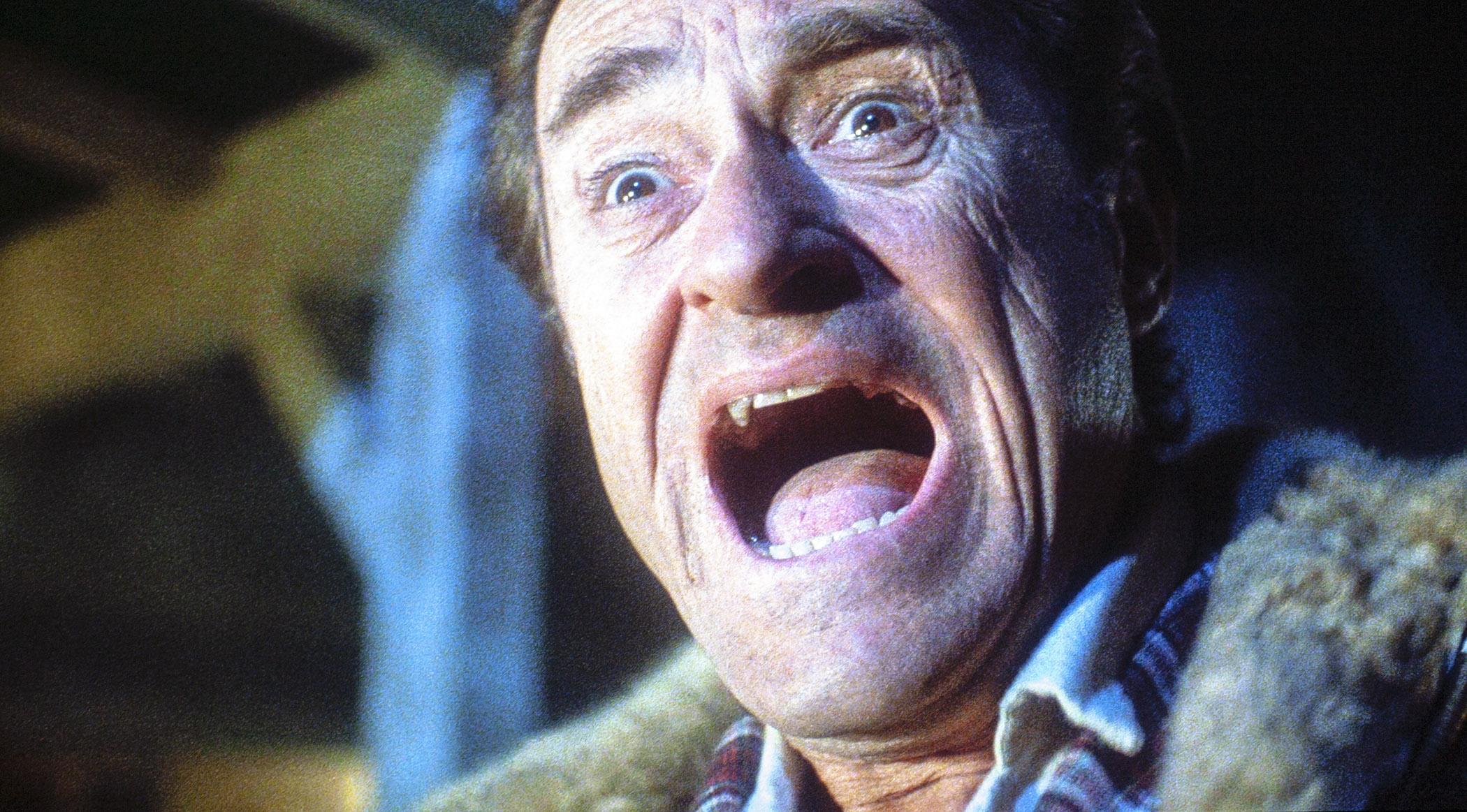 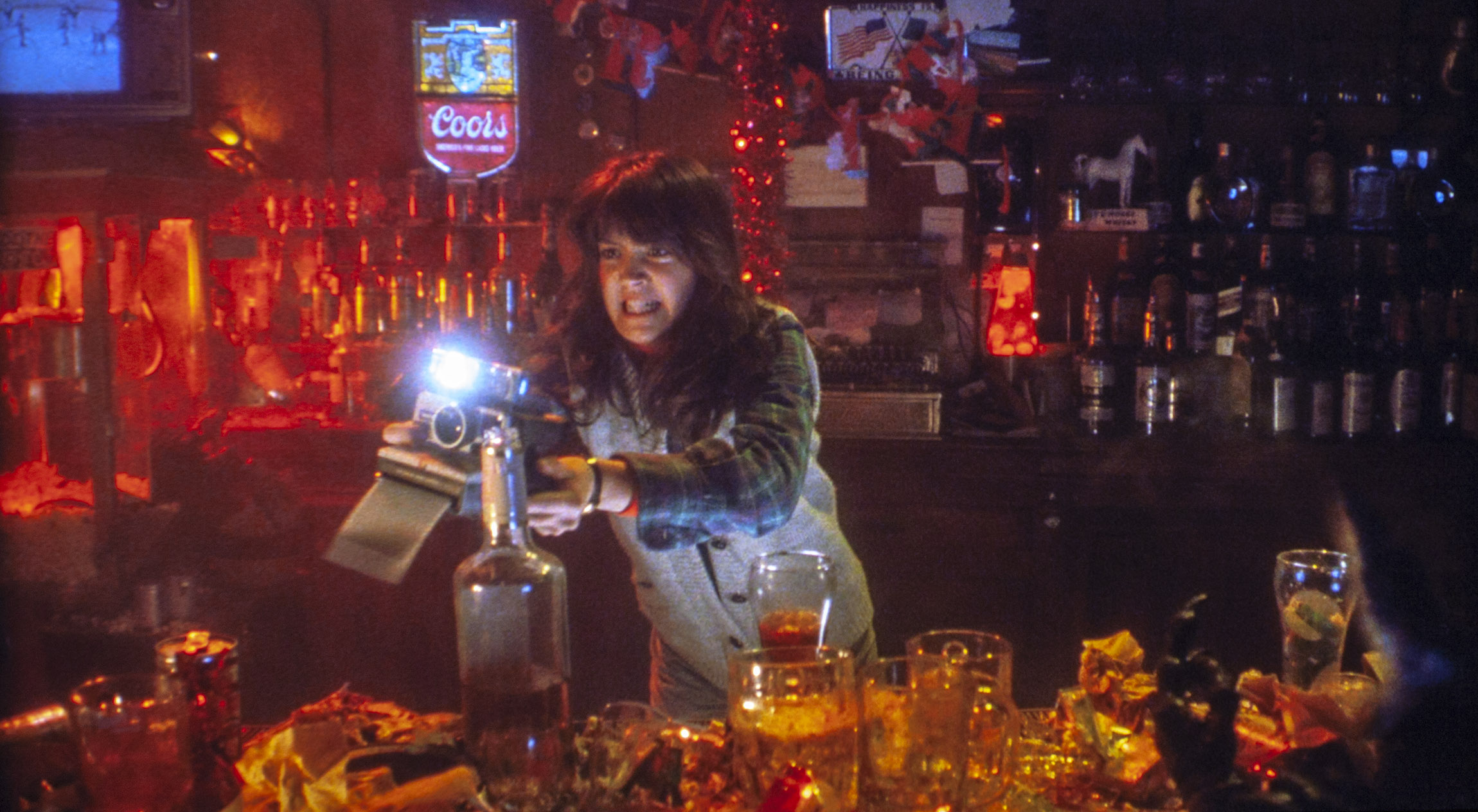 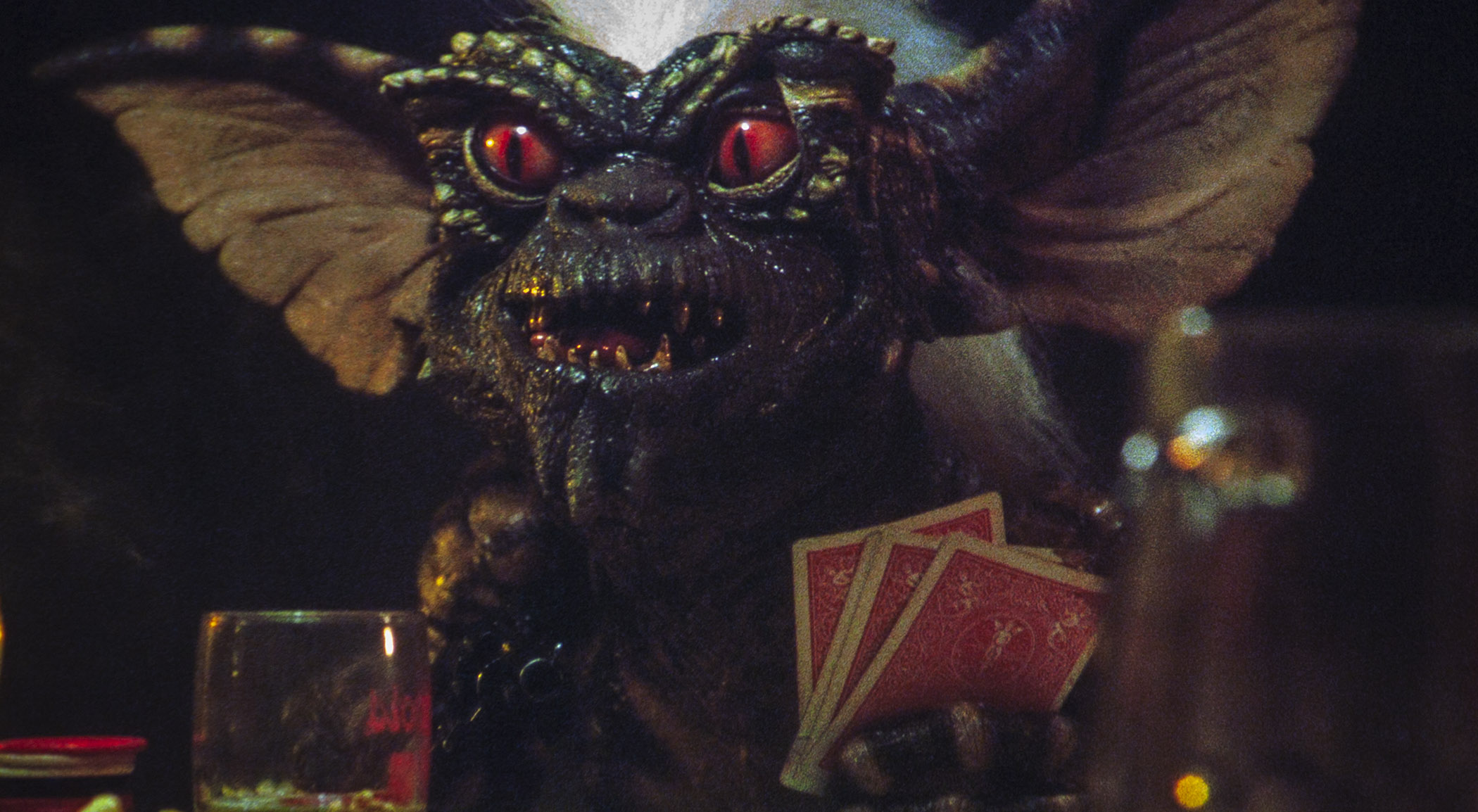 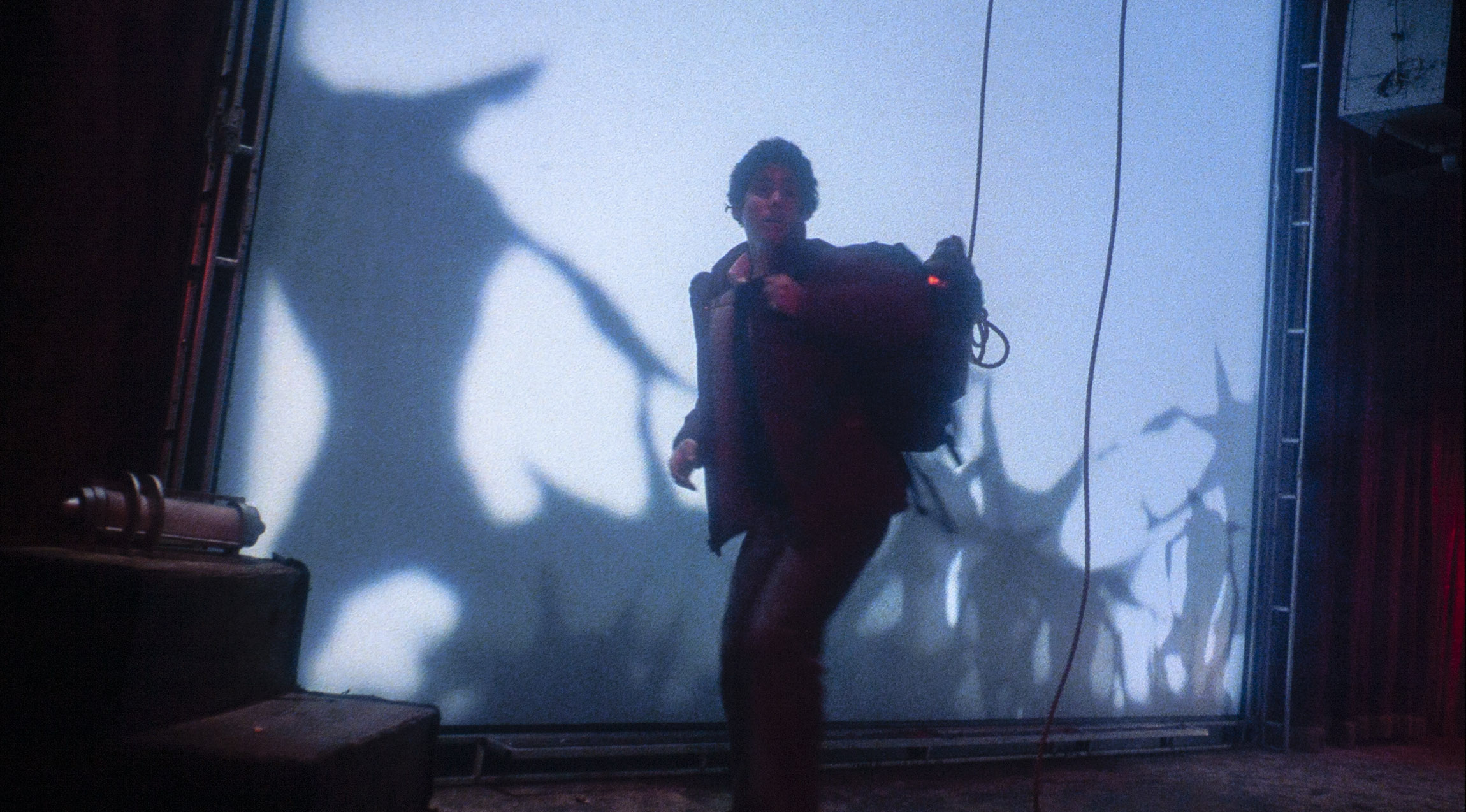 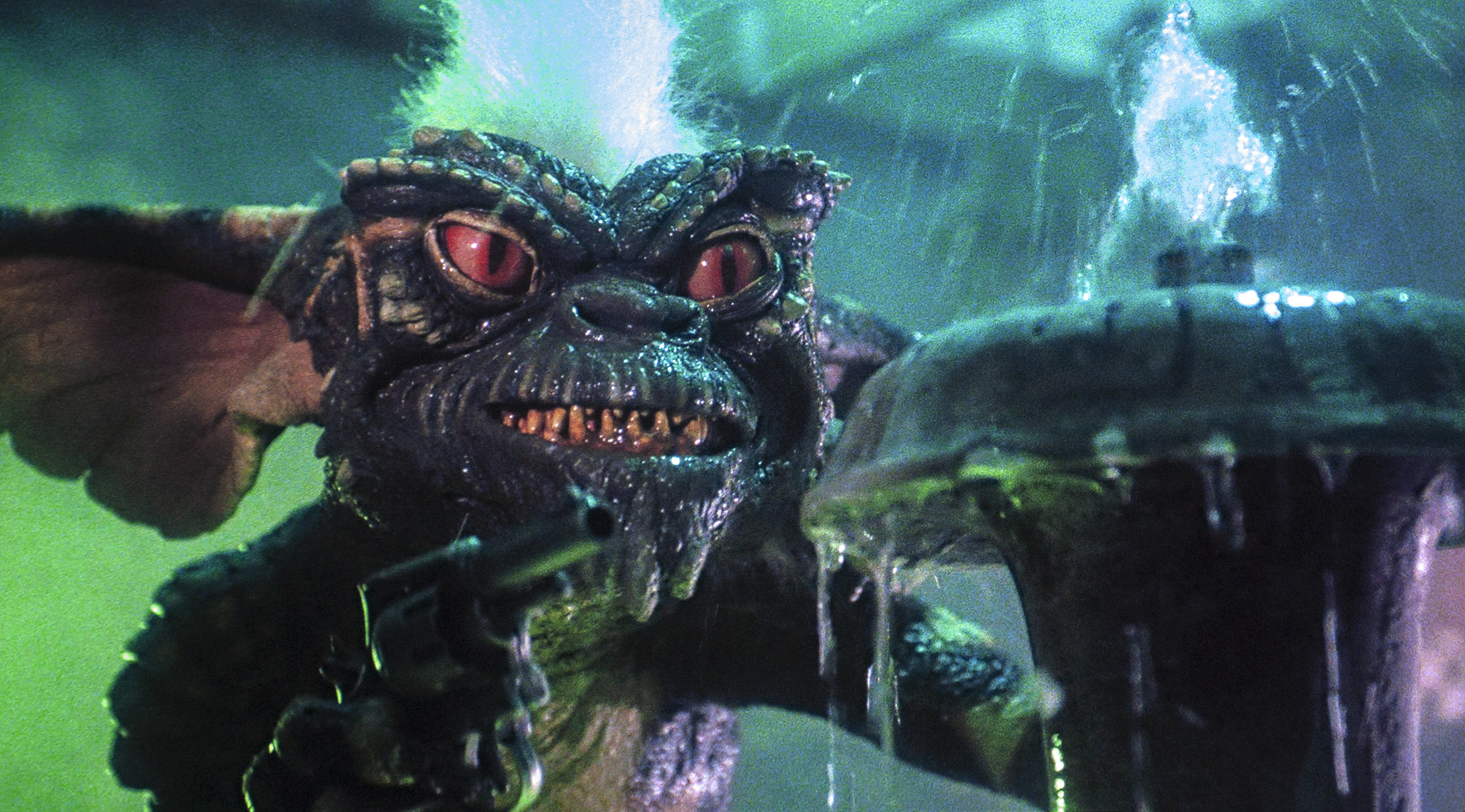 (1 & 2) Dick Miller, who plays WWII vet Murray Futterman is killed by a gremlin. (3) Kate uses the bright flash from a Polaroid camera to knock off some of the gremlins inside Dorry's Tavern. (4) Devilish ring leader Stripe plays poker with his gun at the ready. (5) Billy tries to escape from the gremlins inside the movie theater where they've been watching "Snow White and the Seven Dwarfs." (6) Stripe threatens to shot Billy during the final showdown inside a department store.

Warner scanned the best available sources, most likely the original 35mm camera negative (1.78:1 aspect ratio, slightly cropped from its theatrical 1.85:1), and composite special effects shots for this new 4K remaster. It extracts a healthy dose of natural film grain throughout, so don’t be shocked. Sharpness and clarity are superior to the older HD master – especially in wide shots and close-up facial detail. Only during the composite opening titles and effects shots does the resolution drop a notch in sharpness.

HDR toning from shadows to highlights is nicely graded, without losing detail on either end of the spectrum. The controlled highlights are especially welcome since most hot spots were blown out on the older HD. Colors are richer and more natural, especially in the warm tones of the Chinatown sequence.

Surprisingly, the Dolby TrueHD soundtrack featured on previous Blu-rays has been swapped to the DTS-HD six-channel. Both produce the same sound quality, but a strange decision. Jerry Goldsmith’s score is diverse from the main theme “Gremlins Rag,” played on a synthesizer creating raucous mayhem, to Gizmo’s romantic theme all nicely mixed between the sound effects and dialogue.

“Gremlins” was quite the surprise hit in 1984, finishing the year at No. 4 just behind No. 1 “Beverly Hills Cop,” “Ghostbusters” (available on 4K) and Spielberg’s “Indiana Jones and the Temple of Doom,” and surpassing “The Karate Kid” (4K) at No. 5 by $60 million. 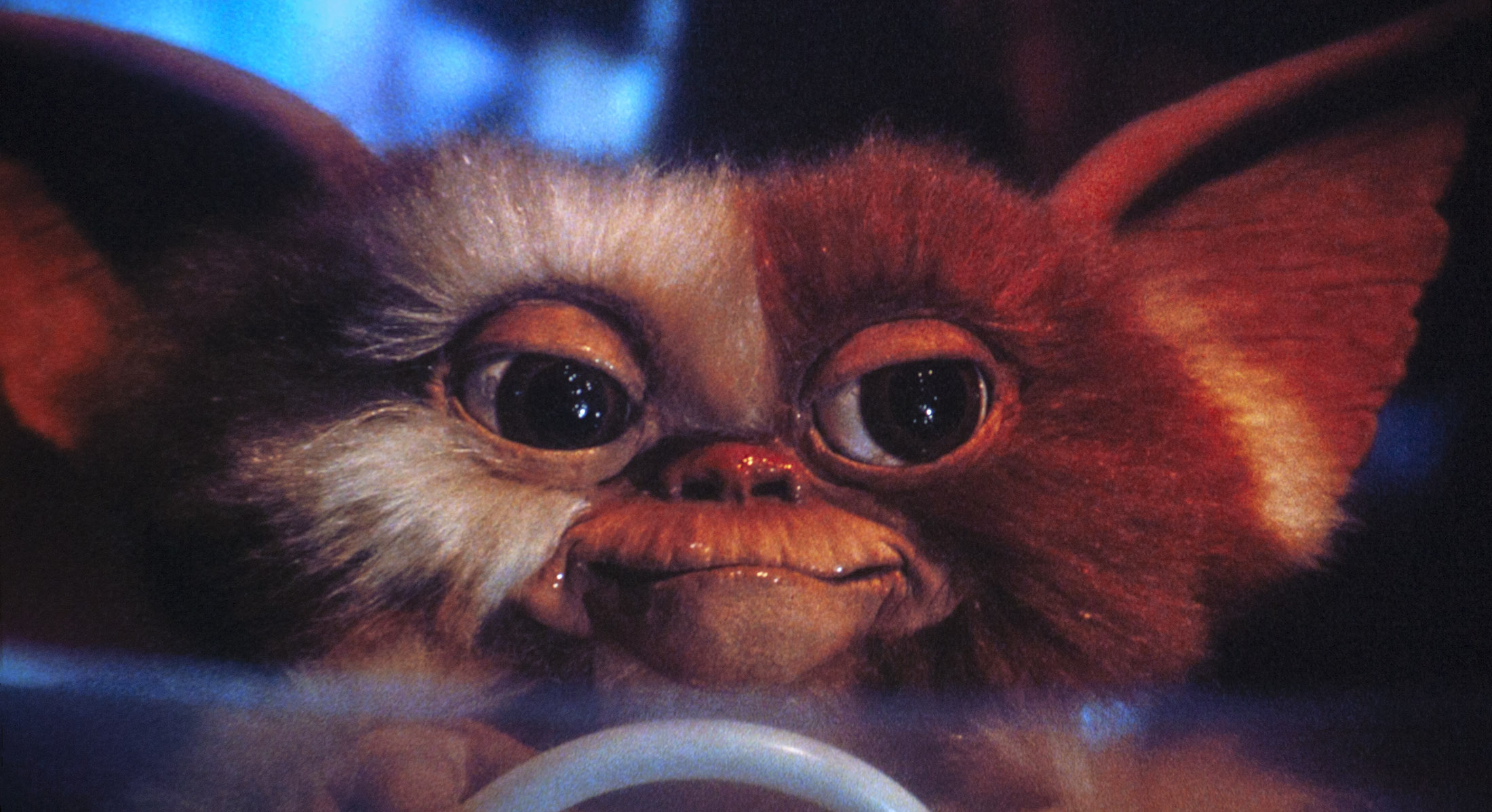 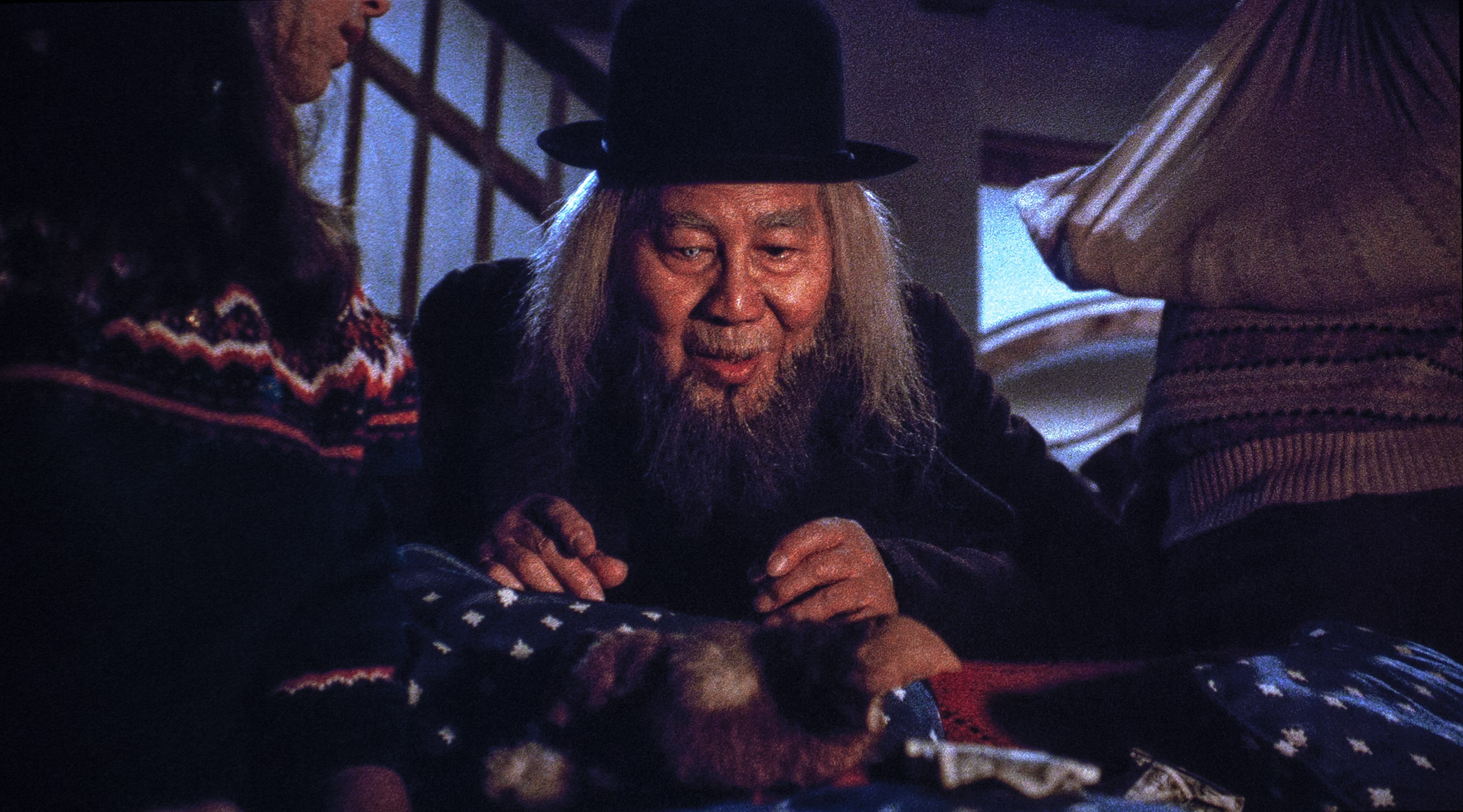 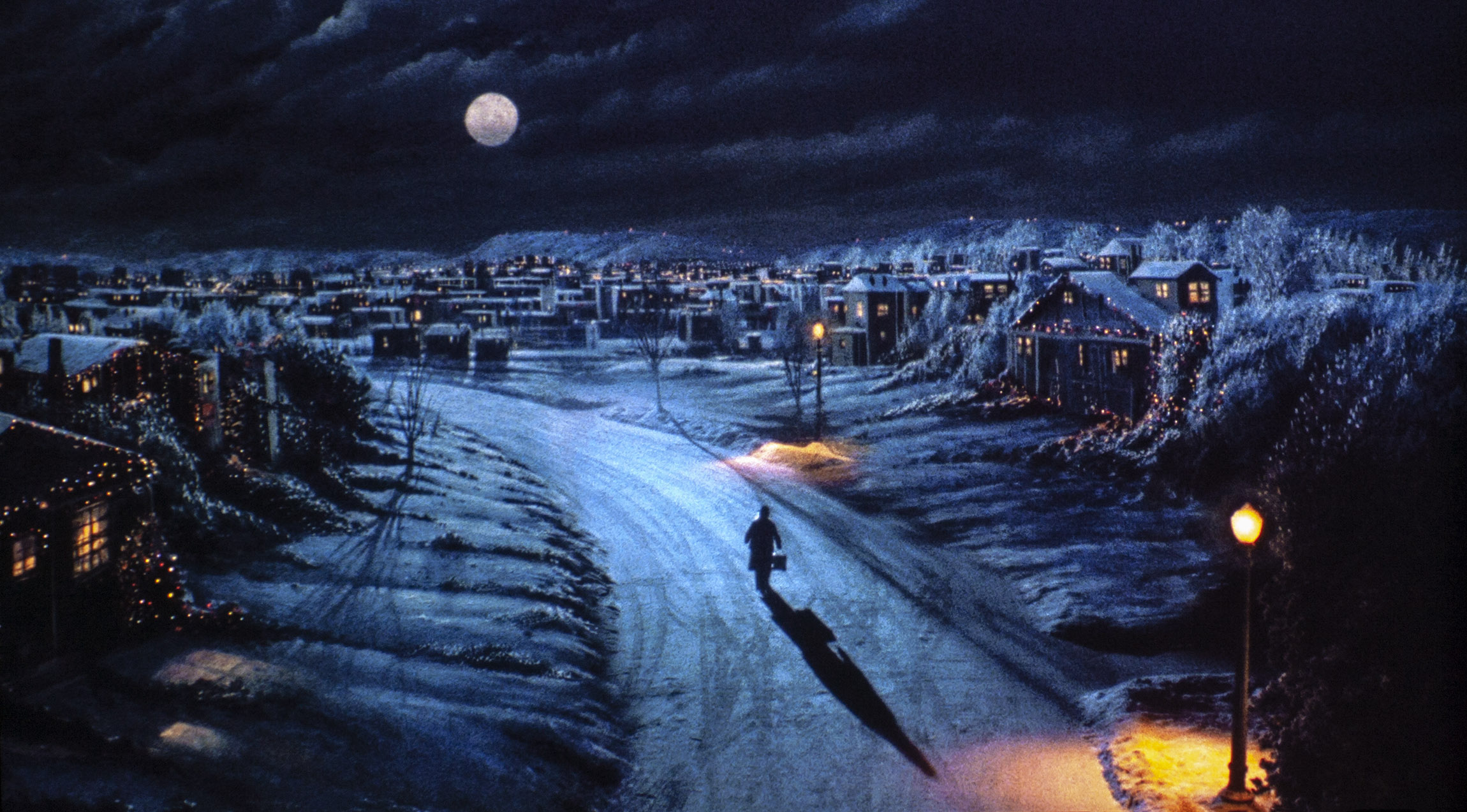 (1) Gizmo comes to the rescue during the final battle against Stripe. (2 & 3) Mr. Wing arrives at the Peltzer home to take little Mogwai back to Chinatown. "I warned you. With Mogwai comes much responsibility, but you didn't listen. And you see what happens."