Fred Astaire stars as hoofer/gambler John “Lucky” Garnett and Ginger Rogers as dance instructor Penny Carrol. "Swing TIme" was their sixth pairing out of 10 films, and nine were made at RKO between 1933 and 1939.
Frame shots courtesy of The Criterion Collection

FRED ASTAIRE AND GINGER ROGERS – oh, what a team!

During the 1930s, their on-screen chemistry was unmatched. As Hollywood’s favorite dancers, they made nine films in seven years. Between “Follow the Fleet” (1936) and “Shall We Dance” (1937), RKO studios assigned up-and-coming director George Stevens to helm “Swing Time,” which includes six hit tunes from composer Jerome Kern and lyricist Dorothy Fields, including the Oscar winner for Best Song, “The Way You Look Tonight.” Today, “Swing Time” is considered one of the greatest American films of all time, landing at No. 90 in the American Film Institute’s 10th Anniversary top 100 lists.

But Fred and Ginger don’t hit the dance floor until the 30-minute mark in the charming classic “Pick Yourself Up.” Astaire plays hoofer/gambler John “Lucky” Garnett, just arrived in New York City and still wearing a top hat and tails after leaving his fiancée at the altar. His gambling has sabotaged the wedding, and he promises his prospective father-in-law, he’ll make $25,000 in the big city and return to marry his daughter.

With only his lucky quarter to his name, he bumps into Rogers as Penny Carrol, a stunning blonde, with her hands full of packages at a Manhattan crosswalk. He unintentionally irritates her – a common theme to their encounters. Infatuated, he follows at a safe distance and discovers she’s an instructor at a dance academy.

(1) "Swing Time" was director George Stevens' first and only musical. (2) Hoofer/gambler John “Lucky” Garnett (Fred Astaire) is suppose to get married today, but his dance partners derail those plans by convincing him his trousers need cuffs and rope him into a game of craps. (3) Lucky's fiancée Margaret Watson (Betty Furness) and her father Judge Watson played by the director's father Landers Stevens are not happy that she was stood up at the altar. (4) Lucky has little to say, but convinces the judge he'll make $25,000 in New York City and return and marry Margaret.

After losing his money to his partners, Lucky hops onto a freight train heading toward to New York City. More than two million men and perhaps 8,000 women became hoboes during the 1930s depression.

He wows her into the academies customary free dance lesson, which leads to a clumsy demonstration, a ballet of pratfalls and slides. Still, Lucky eventually pulls Penny back onto the floor. “It’s like a match thrown onto a pile of gasoline-soaked rags. Fwoom! They dance as though the floor was hot; their taps crackling like oil in a frying pan,” author Imogen Sara Smith writes in the enclosed Criterion Collection essay. The Astaire and Rogers rehearsal sessions were notorious; punishing their feet to a point where hers bled for days. Still, on the silver screen, they float across the floor.

Many Hollywood insiders were shocked that Stevens got “Swing Time,” only his third RKO film after two dramas, “Alice Adams” starring Katharine Hepburn and “Annie Oakley” with Barbara Stanwyck. Stevens got his start as a 24-year-old cameraman and gag writer for Laurel and Hardy, before he became one of Hollywood’s greatest directors.

“My father had this talent to make all [kinds of] pictures. He made one of the greatest westerns with ‘Shane,’ and one of the great dramas with ‘A Place in the Sun’ ...I think he just had the taste and a sense for actors and dramas that enabled him to turn his hand to anything. ‘Swing Time,’ one of the great musicals of all time, seemed to have come easy to him.” — Author and filmmaker George Stevens Jr.

During the commentary originally recorded for Criterion’s 1986 laserdisc version, author John Mueller says Astaire and Kern had “something of a clash” over the music. Astaire wanted at least two numbers to be thoroughly contemporary, but Kern, a generation older, felt he couldn’t do it. So friend and arranger Robert Russell Bennett, who Kern brought from Broadway to Hollywood, jazzed up the tunes to Astaire’s sensibilities. Bennett also composed the background score between the Kern/Fields songs, as well as the brilliant “Waltz in Swing Time” composition, which Mueller says “is undoubtedly the best dance music” ever written for Astaire.

(1) British actor Eric Blore as Penny's boss Mr. Gordon owner of the dance academy. (2) Lucky is paired with Penny for his complementary free dance lesson. (3) Lucky pretends to be a clumsy non-dancer as it becomes a ballet of pratfalls and slides. (4) Lucky and Penny burn the dance floor during the song "Pick Yourself Up." 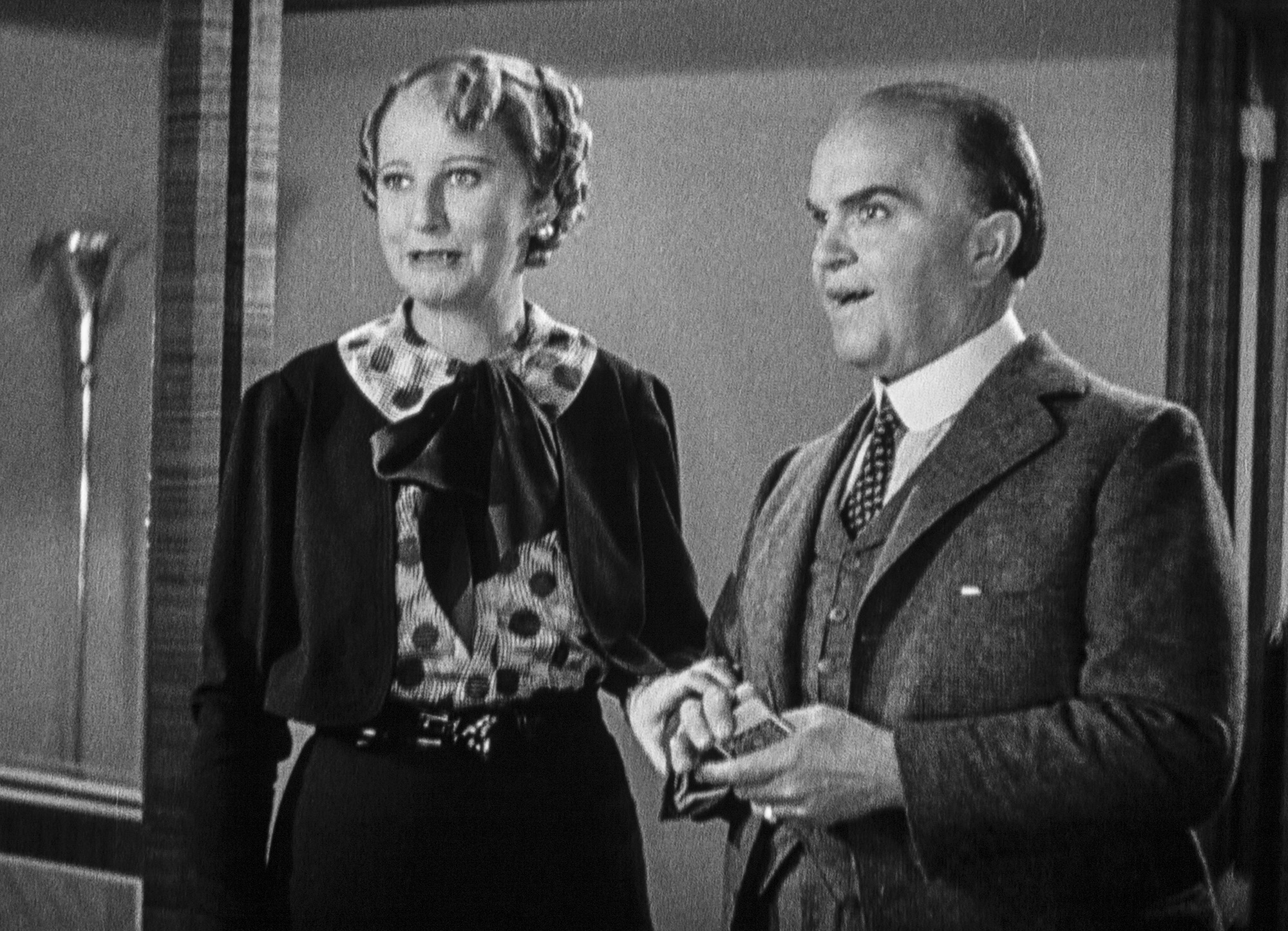 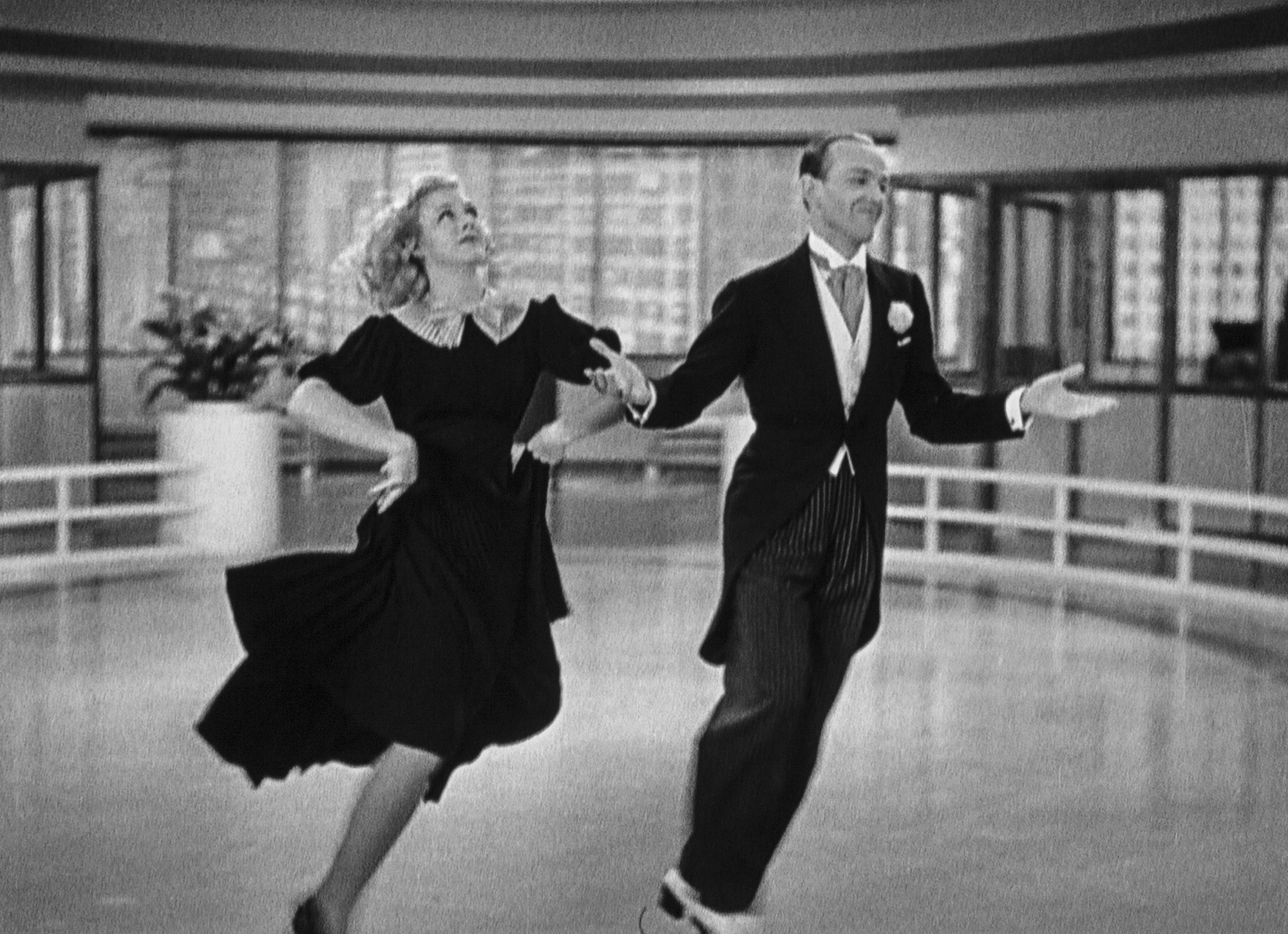 During the “In Full Swing” featurette, dance critic and author Brian Seibert says part of Astaire’s genius was that everything he does on screen is rhythmically part of the music. “No one has even gotten close to equaling it,” he says. Astaire demanded the dance sequences be captured in one continuous take from multi-cameras, framing the dancers from head to toe. During the limits of the day, it was easier said than done.

Astaire got his start as a Vaudeville act in Omaha, Nebraska, with his sister Adele, ultimately moving up the ranks all the way to NYC. She was considered the star, while Fred choreographed the numbers. In 1947, he co-founded the Fred Astaire Dance Studios chain, the first on Park Ave in Manhattan. Hundreds more popped up across the country. Today, the numbers are down to several dozen around the globe.

Film and jazz critic Gary Giddins considers Astaire the greatest solo and partner dancer Hollywood has ever had. “He had charming partners over the years, but what he accomplished with Ginger is unique and you see it best in ‘Swing Time,’” Giddins says. “He made the dance number look so easy and effortless.” Fred and Ginger were first paired as extras in the 1933 musical “Flying Down to Rio.” Once RKO studio executives saw them together they knew they had a prize.

(1) Lucky sings the Oscar winner "The Way You Look Tonight. (2) Latin bandleader Ricardo Romero (singer Georges Metaxa, who was actually Romanian) (3) A casual dance between Lucky and Penny (4) The duo dance to “Waltz in Swing Time,” constructed and arranged by Robert Russell Bennett. 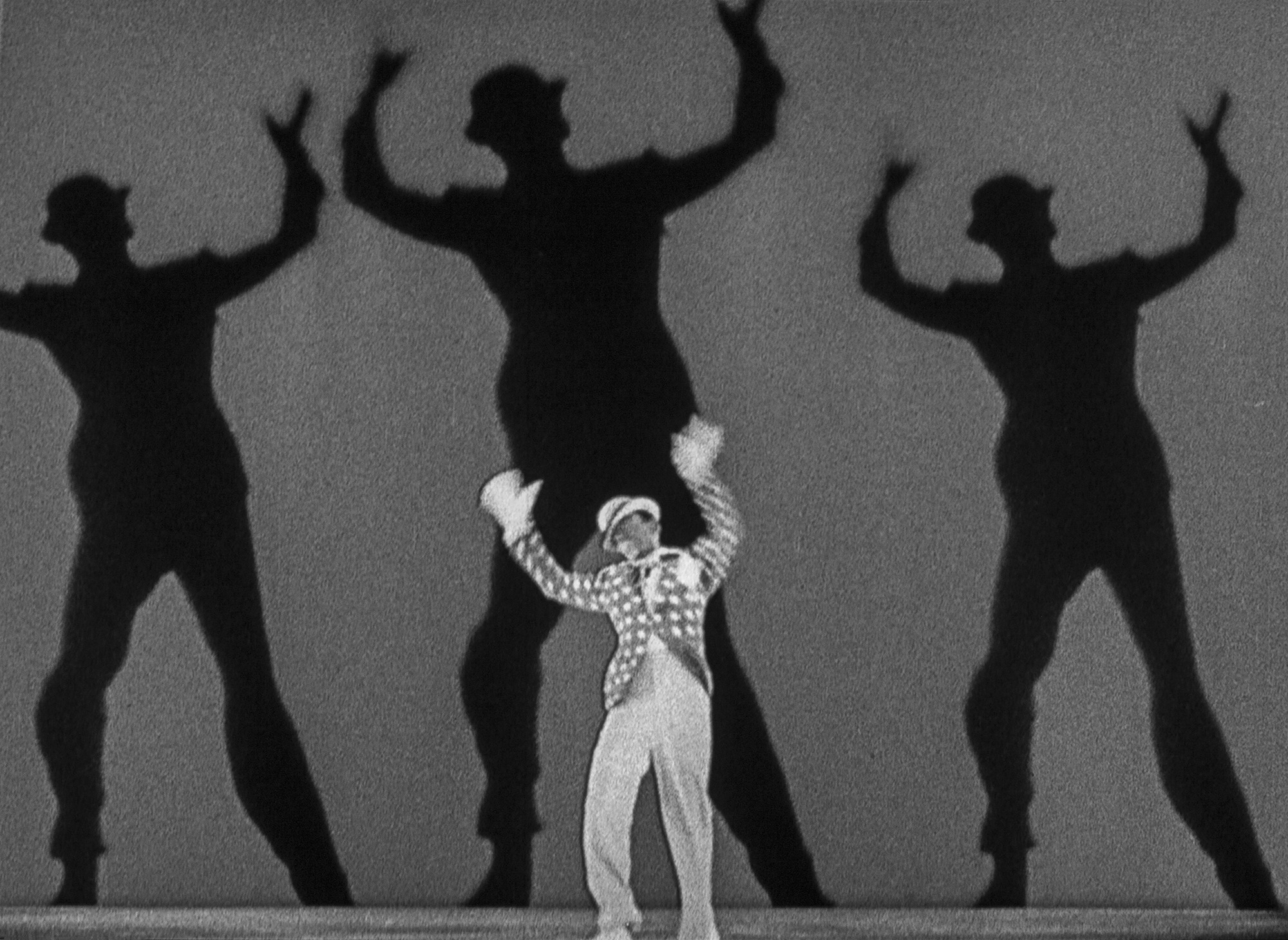 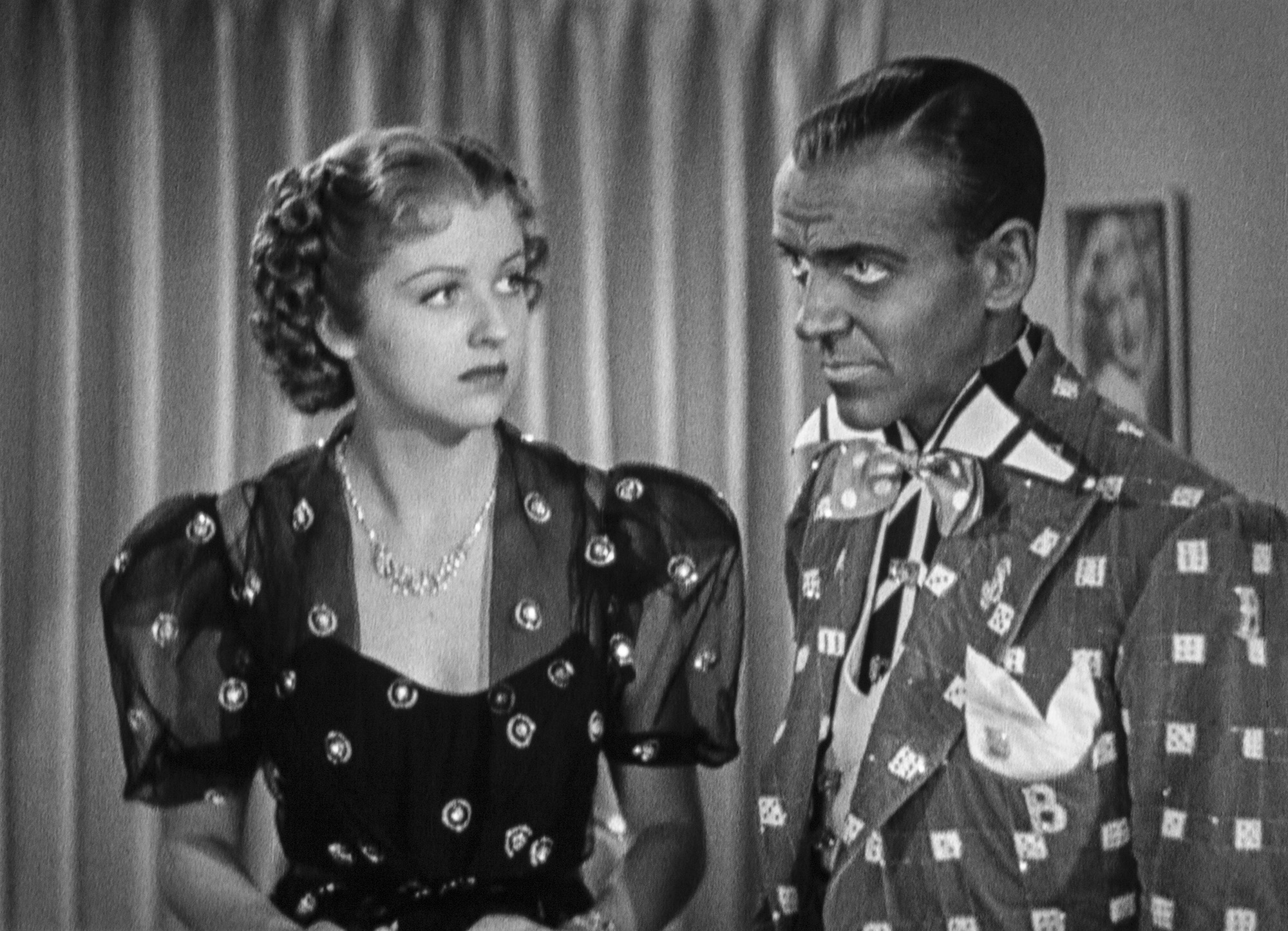 (1) Astaire in blackface to evoke the moves of African-American dancer Bill Robinson during the musical number "Bojangles of Harlem." The number earned Hermes Pan an Oscar nomination for Best Dance Direction. (2) Lucky and his fiancée Margaret.

Criterion did all they could when making its new transfer since the original 35mm camera negative was long since gone. A 2K master was all that was possible because the overall resolution was made multi-generations away from the original. This is an issue facing thousands of films still needing full digital restoration, in which more than 50 percent of the pre-1950s original nitrate camera negatives unusable.

Warner Brothers handled the 2K scanning since they own the RKO library, using two fine-grain prints (more likely a third generation from the original) and a second-generation duplicate negative. Sharpness varies from scene to scene from very good from the duplicate negative to much softer moments from the two prints. The overall grayscale has been readjusted to provide a solid overall presentation from highlights to shadows. Still, the best frames are from the duplicate negative. The transfer was also digitally cleaned from start to finish, removing majority of marks, scratches, and any jitter and flutter from the film.

Film preservation is a key no matter the age of the original film stock. First, proper storage in a temperature-controlled environment is paramount. Then the studios need to digitalize the negatives as soon as possible in 4K or higher. Are there enough scanning houses to make it happen? A single movie can take a week or more to scan in 4K compared to only two days for a 2K scan. A full post-production restoration takes months and a lot of money.

A recent rerelease of Buster Keaton’s classic “The General,” made a decade earlier than “Swing Time,” still had the original negative or a pristine fine-grain print, which was scanned in 4K. Its restoration looked impeccable on Blu-ray for a 90-plus-year-old film.

The original mono track was pulled from one of the fine-grain prints and digitally cleaned removing pops, hiss, and crackles.

This is not to be missed!

(1) Penny tells Lucky she's going to marry Ricardo in the spring when he takes his band to Bermuda. (2) Lucky and Penny dance to "Never Gonna Dance." (3) Lucky and Margaret discuss their marriage. (4) A surprise ending.