British actress Claire Bloom stars as Susanne Mallison, on a three-week vacation in Berlin visiting her brother Martin and his German wife. The great James Mason plays shady East Berliner Ivo Kern, who had been a lawyer before World War II.

DURING THE early days of the Cold War, British director Carol Reed – who had just been knighted by the new Queen Elizabeth, and the first such director to get that honor – headed to Berlin, Germany, to film the black-market thriller “The Man Between.”

Three years earlier, Reed was in Vienna, Austria, another European capital divided between the East and West, to capture his expressionist film noir masterpiece, “The Third Man” (1949). The British Film Institute (BFI) selected it as the No. 1 British film of all time, ahead of David Lean’s “Brief Encounter” and “Lawrence of Arabia.”

The Kino Lorber Studio Classics edition of “The Man Between” is nearly a clone of the two-year-old British version released by Studio Canal and BFI. Both are sourced from a recent 2K digital restoration, more likely from the original 35mm camera negative (1.37:1 aspect ratio), or first-generation print. It features excellent sharpness and natural and controlled film grain from start to finish, while the gray-scale is balanced from highlights to shadows. The audio was also cleaned up, showcasing composer John Addison's ("Tom Jones") gothic score, which features a howling saxophone. The Kino Lorber disc carries over all of U.K. extras, plus an additional commentary by American film critic and author Simon Abrams, who provides a number of interesting backstories pulled from excerpted writings on the production and its primary stars, James Mason and a young Claire Bloom.

The most compelling bonus is the documentary “Carol Reed: A Gentle Eye,” giving an insider’s view of Reed’s 40-plus year career, directing nearly 30 films. Reed grew up wanting to be an actor, but instead got involved behind the camera in 1930, during the early days of British talkies. His directorial debut, “Midshipman Easy” (1935), showed early signs of a filmmaker who could “bring out the humanity and love of filming on location,” said director Guy Hamilton (“Goldfinger”), who got his start as an assistant to Reed.

(1) Director Carol Reed filmed "The Man Between" in the Western sector of Berlin during the early spring of 1953. (2) Susanne arrives on British European Airways - Viking flight BE460 from London. (3&4) "Welcome to Berlin," says Susanne's sister-in-law Bettina (Hildegarde Neff). "Martin is on duty at the hospital." He's a British military doctor, as two cases of typhoid have hit the refugee population. 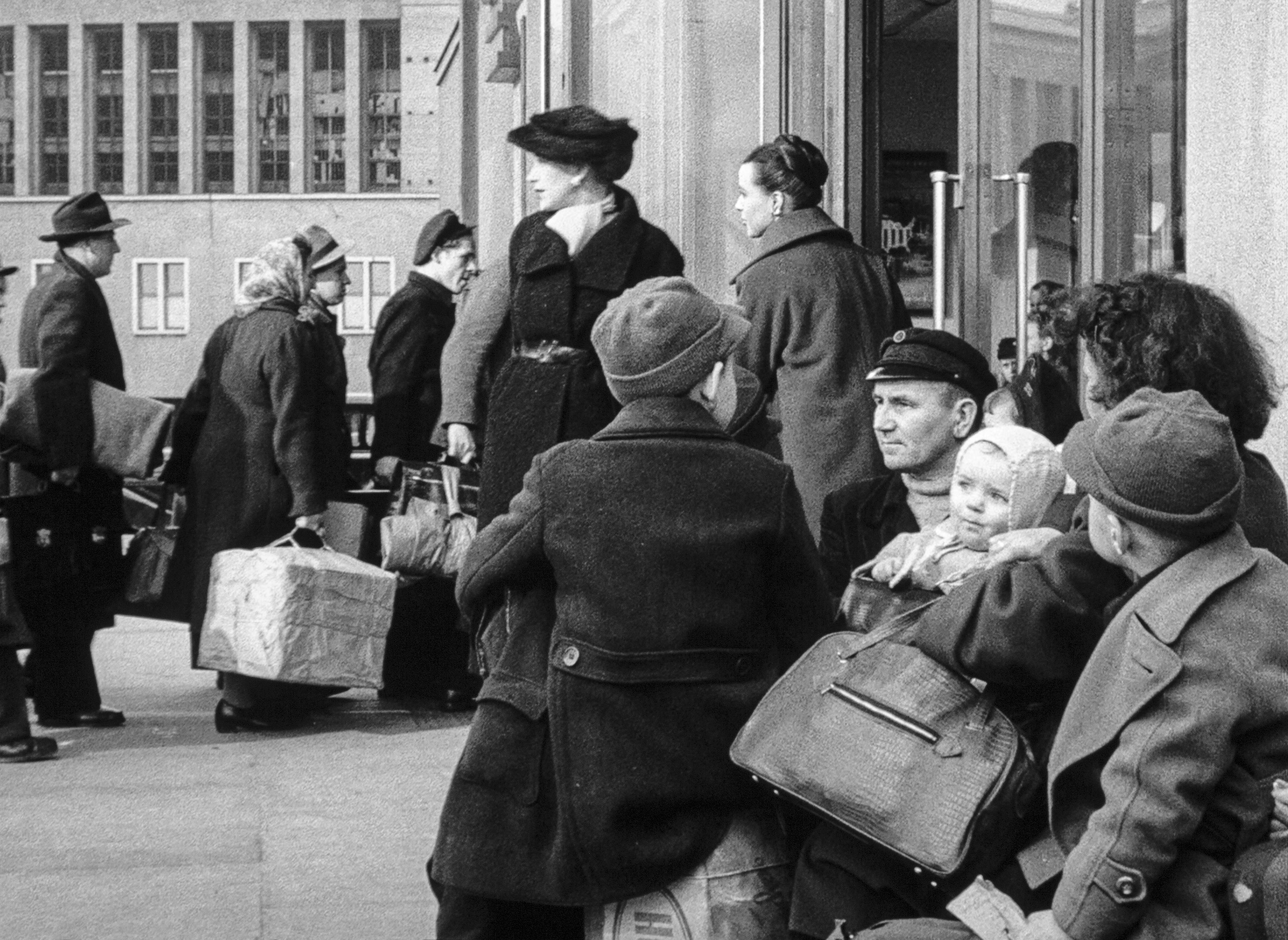 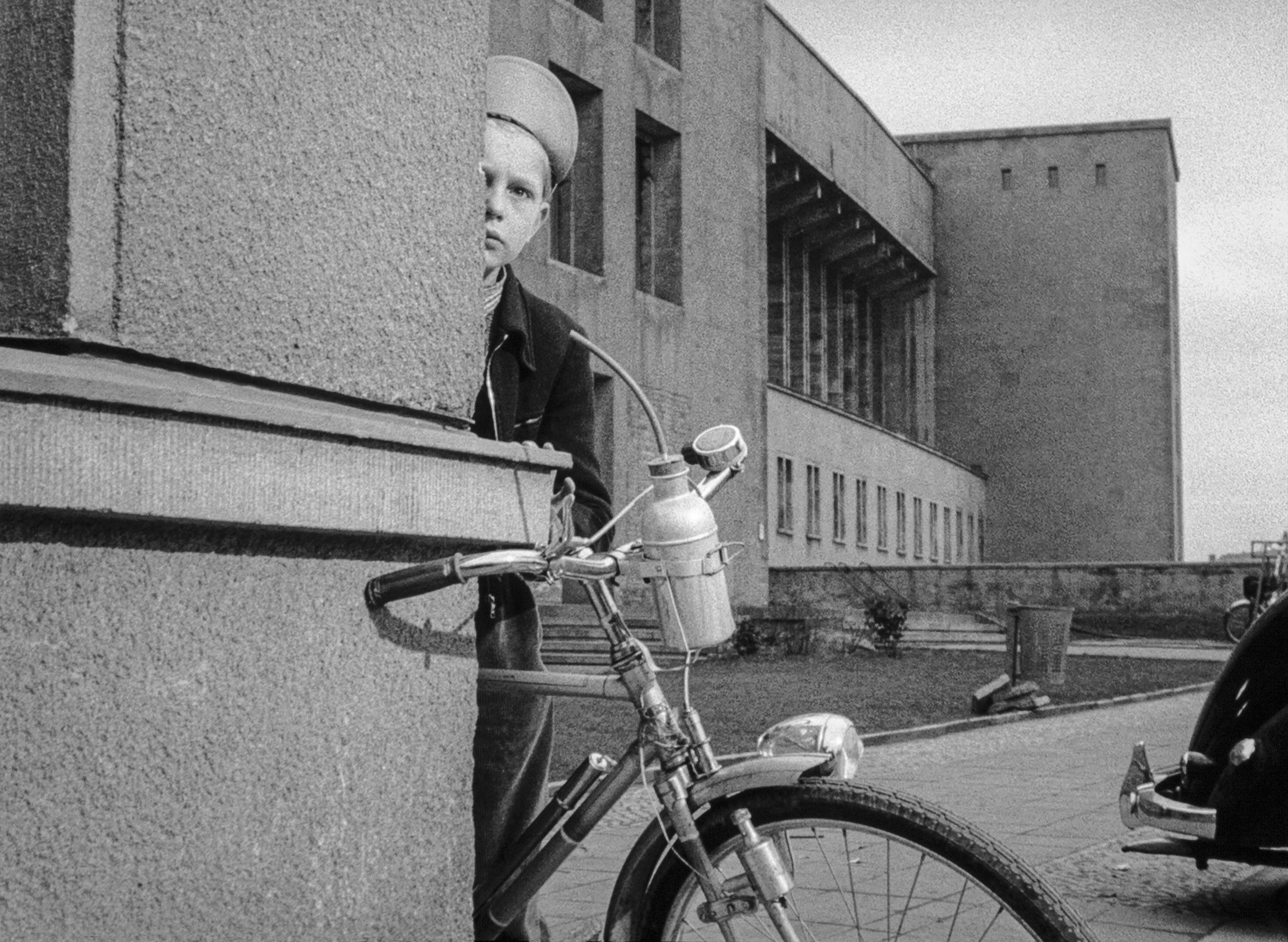 (1) Hundreds of refugees from the East hope to flee Germany from the Berlin airport, as Susanne and Bettina search for a taxi. (2) A mysterious 12-year-old boy (Dieter Krause) is a hired lookout for Ivo Kern, and tails Susanne and Bettina's taxi from the airport to her family home in the war-ravaged section of West Berlin - No. 8 Bernardstrasse.

His first major film was an adaptation of the novel “The Stars Look Down” (1940), which received high praise and starred Britain’s leading actors Michael Redgrave and Margaret Lockwood. It featured “a great documentary realist touch,” which would become Reed's trademark, said, Hamilton. During World War II, Reed was commissioned to make propaganda documentaries, and one particular short, “The Way Ahead,” was so powerful it was upgraded to a full-fledged feature film. Once released in theaters, it became one of Britain’s most important wartime films. It starred David Niven as Lt. Jim Perry, and traces the lives of seven civilians called up by the Army, from boot camp all the way to North Africa. “It breaks your heart,” says director Stephen Frears.

After the war, Reed made three films that “cemented his reputation internationally,” says writer and film historian Tony Rayns. The first, “The Odd Man Out,” (1947) was made just one year after the novel was published by F.L. Green, who also worked on the screenplay. It revolves around the final hours of Johnny McQueen, played by James Mason. He is the local chief of “the Organization” (a take on an IRA leader in an unnamed city, obviously Belfast). It was filmed on location in Northern Ireland and London.

Next, “The Fallen Idol” (1948), a Graham Greene story that follows young Phillipe, an ambassador’s son, played by first-timer Bobby Henrey, and his relationship with the embassy butler Baines, played by Ralph Richardson. Phillipe believes the butler has committed a murder and he must save him. It runs just over 90 minutes, with plenty of emotional tension, that’s nicely framed with unsettling angles and a checkerboard floor.

“The Third Man” (1949) is Reed’s finest, another adaptation from a Greene novel, filmed along the dark streets of Vienna, where American novelist Holly Martins (Joseph Cotten) searches for his childhood friend, racketeer Harry Lime (Orson Welles). “Vienna was a bomb site in those days; the more rubble, the more Carol said, ‘Bloody marvelous!’ But the sewers were absolute agony,” where Lime is on the run during the finale, says Hamilton. Reed used two production units, one for the daylight scenes and another for the dark sewers.

(1) Susanne and her brother Martin (Geoffrey Toone) are reunited. (2) Susanne notices in a Berlin nightclub mirror that something is bothering Bettina. (3&4) After dinner, the two ladies are nearly hit during a car chase involving East and West authorities.

(1) The ever-present portrait of Stalin hangs over workers in the Soviet-controlled East Berlin. (2) Bettina introduces Susanne to Ivo Kern during a day-trip to East Berlin. He's much more than an acquaintance of Bettina. (3&4) Gangster Halendar (Aribert Wäscher) shows up at a Berlin ice staking rink to talk to Ivo about an upcoming kidnapping. (5) West Berlin police expect Olaf Kastner (Ernst Schröder) right, a friend of Bettina and Martin, to be the next kidnapped victim since he helped two East Berlin police to crossover to the West.

Oddly, the documentary completely jumps over Reed’s films of the 1950s, including the politically charged thriller “The Man Between” and “Our Man in Havana” (1960). Alec Guinness played a British spy in Cuba, posing as a vacuum cleaner salesman. It was filmed two months after the fall of the Batista regime, and new leader Fidel Castro green-lit shooting on the streets of Havana. As expected, Reed provides striking on-location black and white photography, filmed in super widescreen. The documentary finishes with Reed’s only Oscar-winner, the musical “Oliver!” (1968), based on Dickens’ “Oliver Twist,” and an adaptation of Lionel Bart’s stage musical. “He hated musicals, but loved working with kids,” says Hamilton. Most critics considered it one of his lesser films.

“Carol Reed had the precision of a watchmaker, the command of the realist film…and the texture of reality.” — Michael Powell, British master filmmaker

Rewinding back to “The Man Between” (1953), Reed said during an interview that he was drawn to the story so he could work with James Mason again, and because, “he really liked the atmosphere of Berlin after the war.” Reed wasn’t particularly excited about the script by American screenwriter Harry Kurnitz (“Witness for the Prosecution”), calling it humorless and turgid, says Abrams during his commentary. Still, after numerous failed attempts to hire a new writer, Reed pulls off an atmospheric tale of a city torn between the East and West.

The plot is built around the visit of Susanne Mallison, a young English schoolteacher played by Bloom, who arrives at the Berlin airport for the holidays to visit her brother Martin (Geoffrey Toone), a British military doctor, and his German wife Bettina (Hildegarde Neff). Reed’s camera spots a mysterious 12-year-old boy (Dieter Krause) on a bike who tails their taxi from the airport to her family home. A subplot brews between Bettina, Susanne and a shady East German, Ivo Kern, played by Mason. During the second half, Susanne is abducted and taken to the Eastern sector, where Reed and cinematographer Desmond Dickinson capture the desolate landscape of a city still reeling from the collapse of the Nazi empire. Bloom was shocked by the huge piles of rubble as high as apartment buildings. “People were living underneath in very dreadful circumstances,” she says during an interview featured on the disc.

After a failed attempt to abduct Olaf Kastner, Susanne is kidnapped with hopes to lure Kastner for an exchange.

(1&2) Susanne is taken to the East Berlin opera house with Ivo and Halendar. (3) Ivo has his own plans to get Susanne back to her brother and sister-in-law. (4) East Berlin police are on the lookout for Ivo and Susanne at a train station. (5) Excellent night time photography from Reed and cinematographer Desmond Dickinson dominates the final act.

Bloom was only 22 when cameras started rolling, and had become an overnight success after co-starring in Charlie Chaplin’s “Limelight” (1952), and then a British stage production of “Romeo and Juliet.” Abrams says Bloom noted in her memoirs that, “In 1952, my star was at its brightest; it’s impossible to conceive how any young actress could achieve so much so soon.” She had been featured on the cover of Time Magazine and photographed for Vogue and Harper’s Bazaar.

Bloom also said during her interview that Reed had taken advantage of her inexperience and worked her day and night. “I was naïve … but terribly excited by the idea of going to Berlin and working with Carol Reed, and of course with the great James Mason.” Abrams also quotes Mason's memoirs about how the production started in late March 1953, just after the death of Stalin. Reed’s production designer shocked many Western sector residents when he lined the streets with enormous portraits of Stalin, to mimic the Soviet sector, which was off-limits to Reed’s cameras.

Another highlight is Reed's nighttime photography filmed in the bitter cold and snow, with deep shadows and odd angles from outside the opera house to the sector checkpoints, as it becomes a race to get Susanne back across to the Western sector. Reed keeps giving the audience visual hints of the undercurrent of secrets and espionage, much like a Hitchcock film.

“The Man Between” is not perfect, but a convincing thriller of life on either side of the Brandenburg Gate, and deserves a spot in your classic film collection.

(1) At every turn, the police are searching for Ivo and Susanne. (2) The two end up at an apartment building, as the East sector police have them surrounded. (3&4) With the help of a resident, Ivo hides on the ledge, while Susanne disguises herself. (4) After the police leave the two reunite. 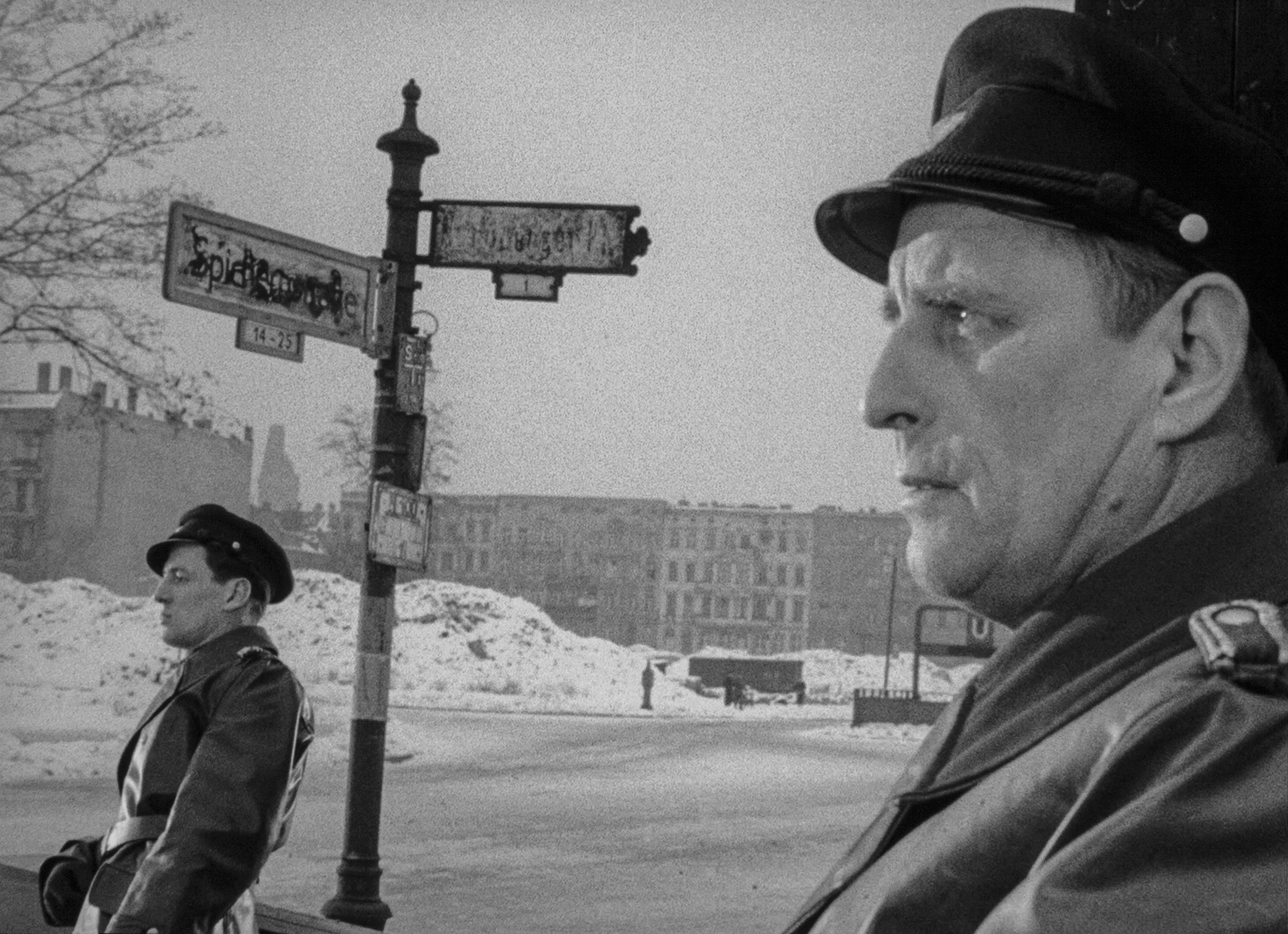 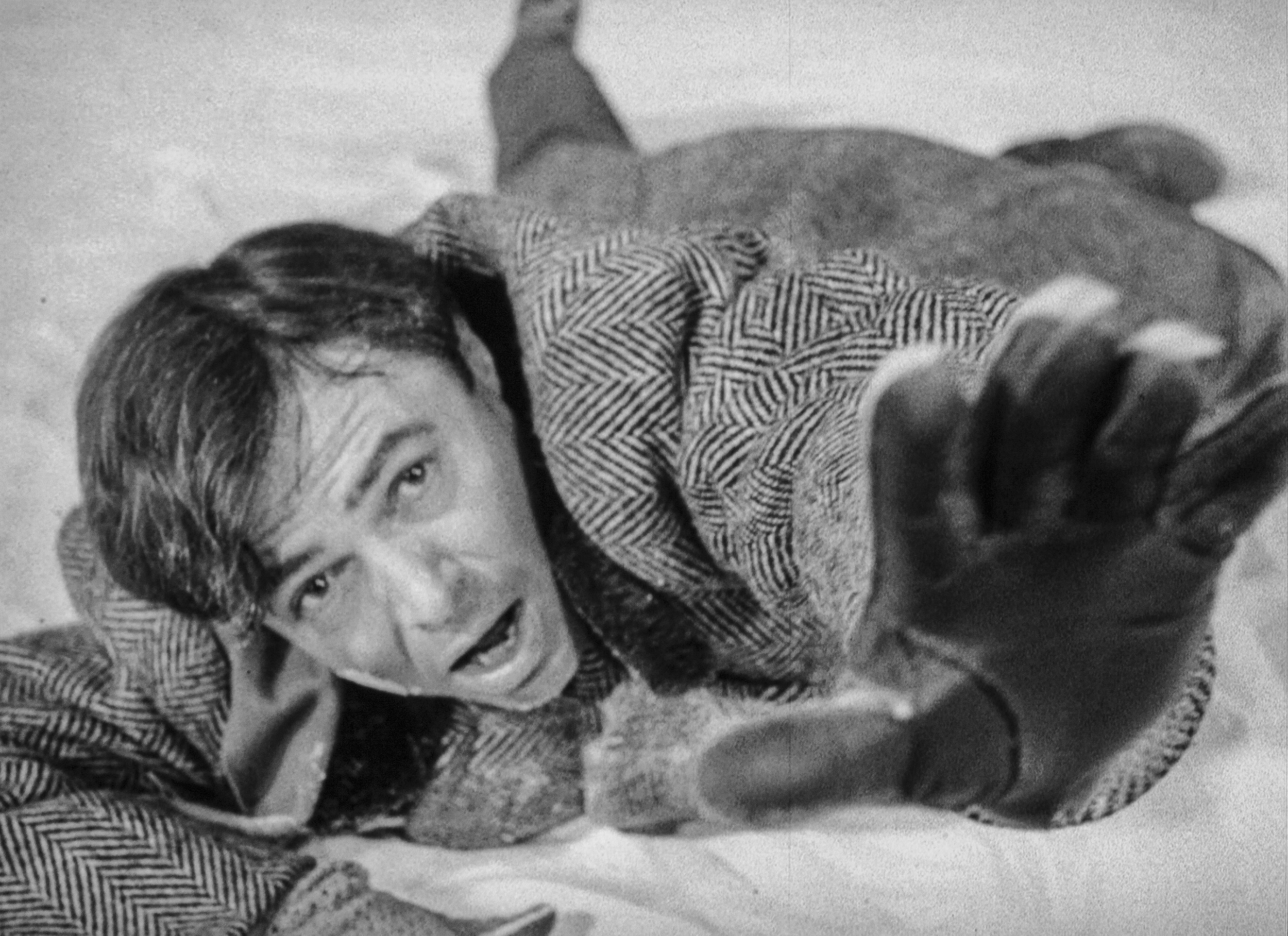 (1-3) The final attempt to get Susanne across the East/West checkpoint.