Robert Crosbie (Herbert Marshall) comforts his wife Leslie (Bette Davis) after she's killed a man she says attacked her. "The Letter" was directed by William Wyler, who also directed her in "Jezebel." The script was written by Howard Koch, from the play by W. Somerset Maugham.

WHAT DOES a person do when threatened with incriminating evidence at her trial for murder? Get rid of it!

That’s the situation Leslie Crosbie and her lawyer Howard Joyce are faced with. The film opens at night on a rubber plantation in Singapore. A gun is fired and a man bolts from the house. As he falls to the ground, a woman follows and empties her revolver into his back.

Leslie, played by the magnificent Bette Davis, will claim it was self-defense, that her victim – drunk and on the prowl – tried to rape her. She was only defending herself and lost control once she found the gun.

Her husband and friends believe it even though the dead man, Geoff Hammond, is well-liked in their European community. As we get to know the victim throughout the narrative, viewers grow more suspicious. Hammond sounds like a great guy, a figure out of a James Clavell novel, maybe a cross between Clark Gable and Errol Flynn. He recently married a Eurasian woman who lives in the Chinese quarter. But there he is, in the Crosbie house the night Leslie’s husband Robert (Herbert Marshall) is away patrolling the fields. It looks like Hammond may have sneaked up on the house.

Family friend Howard Joyce, played by James Stephenson in an Oscar-nominated performance, has his suspicions, and begins picking Leslie’s story apart. Even so, he becomes her lawyer as she’s taken to jail to await trial. Then his clerk, Ong Chi Seng (Victor Sen Yung) delivers a blow – Hammond’s widow is in possession of a letter from Leslie to her husband. The message contradicts key issues that could sway the jury to a guilty verdict. But no worries, the clerk says, the letter can be had for a price, which creates a two-fold problem.

(1) Leslie kills Geoff Hammond, a well-known member of European society in British Colonial Singapore.  (2) The Warner Archive Collection has remastered "The Letter" in a near-perfect 1080p with solid blacks, bright whites and excellent gradations.  (3) The murder weapon.  (4) "The Letter" was nominated for seven Academy Awards including Best Picture and Best Actress for Bette Davis.

Obtaining it will compromise the lawyer’s integrity and get him disbarred if anyone finds out. The $10,000 price will bankrupt her husband. This is where the complications come in leading to a devastating climax.

“The Letter” was adapted from a W. Somerset Maugham short story. He was one of the the most popular and highly paid authors of the early- to mid-20th century, a consummate dramatist, who also wrote non-fiction, plays and opinion pieces, and edited others. His knowledge of human nature was sharp, accurate and frequently dark. Some of his work, like “The Letter,” was based on real life events.

Maugham adapted his story into a play in 1927, and it was also made into a silent film in 1929 according to the TCM website. His story of murder, blackmail, infidelity and bigotry was remade nine times, some in foreign languages before the age of dubbing. The latest version was in 1982 for an ABC TV movie starring Lee Remick. It was performed twice for a Lux Radio Theater broadcast, and again as part of NBC’s Producer’s Showcase in 1956. A 1986 essay by mystery writer Joan Hess details Maugham’s background. Orphaned at an early age and educated abroad, he was a homosexual in a time when he could have been imprisoned. He studied medicine before turning to writing full time.

“The Letter” was nominated for seven Academy Awards including Best Picture, Best Actress for Davis, Best Director for William Wyler, Best Cinematography for Tony Gaudio (“The Adventures of Robin Hood” with Errol Flynn) and Best Music for maestro Max Steiner. But 1941 was a year of stiff competition; Hitchcock’s “Rebecca” won Best Picture and John Ford Best Director for “The Grapes of Wrath.”

(1) Steeped in film noir. Warner Brothers bought the play for it star actress, Davis. The script had to be approved by strict Hays Committee rules regarding murder, adultery, deception, and sex.  (2)  Robert stands up for his wife on the night of the killing. "You've been the best wife a man could have."  (3) Leslie's attorney Howard Joyce (James Stephenson) is approached by his clerk, Ong Chi Seng (Victor Sen Yung) about a letter Leslie sent to the murder victim containing evidence that could result in a death sentence.  (4) Joyce makes arrangements with Leslie to obtain the letter, even though they know it will bankrupt Robert.

“The Letter” holds up. It’s almost a film noir, with its luscious black and white picture remastered in 1080p (1.37:1 aspect ratio) from a variety of sources. As such, there are a few soft spots – but only a smidge. Visuals are near-perfect with deep blacks, crisp highlights and beautiful gradations. In order to achieve perfect shadows, Wyler reportedly ordered them painted on the sound stage floor. Known for innumerable re-takes, he spent two days shooting the opening murder scene. It got to the point where Davis could no longer hold the gun. Apparently, he loved that scene so much, he just liked doing it again and again. The movie actually uses his first take.

Detail and texture in costumes, backgrounds, sets and props is very good. The actors, especially Davis, look glamorous in that classic Hollywood way. Note the detail in Leslie’s lace-making; she’s always working on it. It’s a great visual metaphor, too, questioning if she’s spider or fly caught in a web of her own making. There are other exciting costume choices such as the hat she wears in the courtroom scene. First shown in profile, notice how Leslie looks like a bird of prey. It’s brief, but had to be deliberate. And check out the dragon lady, Mrs. Hammond played by Gale Sondergaard in full Chinese drag. IMDb describes her roles as “sly, manipulative, dangerously cunning and sinister.” She’s deadly in “The Letter.” A Chinese actress would play the role today, but at the time the only Asian actress was Anna May Wong, considered too young for the part.

“Gale Sondergaard’s performance … as the Eurasian wife of the man Leslie Crosbie killed was breathtakingly sinister. I was so lucky she was cast in this part.” — Bette Davis

Sound has also been upgraded to DTS-HD 2.0 from a mono track. Warner Brothers’ technical crew has done another admirable job. Picture and sound have been cleared of dirt and scratches, hiss and snap. We couldn’t ask for better. Subtitles are unnecessary, but available for those who use them.

“The Letter” had so much going for it before it hit theaters. Howard Koch, who also wrote the screenplay for “Casablanca” (1942), adapted Maugham’s play. It also reunited Davis and Wyler. They had worked together on “Jezebel” (1938), another outstanding classic from the Warner Archive Collection; Davis won a Best Actress Oscar for it. Davis and Wyler had a love affair during the filming of “Jezebel,” which seemed to ignite a spark in their creative relationship – even when they disagreed on a scene.

(1 ) The conditions for buying the letter include meeting Mrs. Hammond. Note Leslie's web-like lace shawl.  (2) The widow forces Leslie to kneel and remove her veil before handing over the letter.  (3) Gale Sondergaard plays the classic Hollywood Dragon Lady to the hilt.

“I personally, after ‘Jezebel,’ would have jumped into the Hudson River if [Wyler] had told me so. That’s how much belief I had in his judgement as a director.” — Bette Davis

Still, she walked off the set over a key scene. Wyler wanted Leslie to look her husband in the face when she delivered, “With all my heart, I still love the man I killed.” Davis thought it was too cruel, but they shot it Wyler’s way.

“Even today, 37 years later, we still disagree on it. Well, Bette read it the way I asked her to, but I’m sure she would like nothing better right now than to drive over to Warner Brothers and re-shoot the scene her way.” — William Wyler, 1977

Davis, who was then being honored by the American Film Institute, nodded in agreement. On the other hand, she stopped James Stephenson from walking off the film during one of his frequent arguments with Wyler. Under contract, he worked steadily but never became a star. His casting became a problem between Wyler and Jack Warner, but the director got his way.

“Every time Jimmy would leave I would run after him and make him come back saying ‘It will be worth it …You will give the great performance of your career under Wyler’s direction.” — Bette Davis

He returned every time, and – yes – the role made him a star although he didn’t get to enjoy it. Stephenson, 53, died of a heart attack only a year later.

Sadly, there aren’t many bonus features to “The Letter,” only an alternate ending – similar to the one shown in the film – and two Lux Radio Theater Adaptations from 1941 and 1944, both starring Bette Davis and Herbert Marshall as Leslie and Robert Crosby. The first also has James Stephenson as attorney Howard Joyce. These are good, but I wish we had a documentary from film historians.

The Wyler-Davis version of “The Letter” soars with a tight script, fine ensemble acting, outstanding cinematography and outstanding pacing and editing. Plot points were changed from the original story because of the Hays code, so maybe it’s time for a remake. Meanwhile, this is the best there is. Recommended! 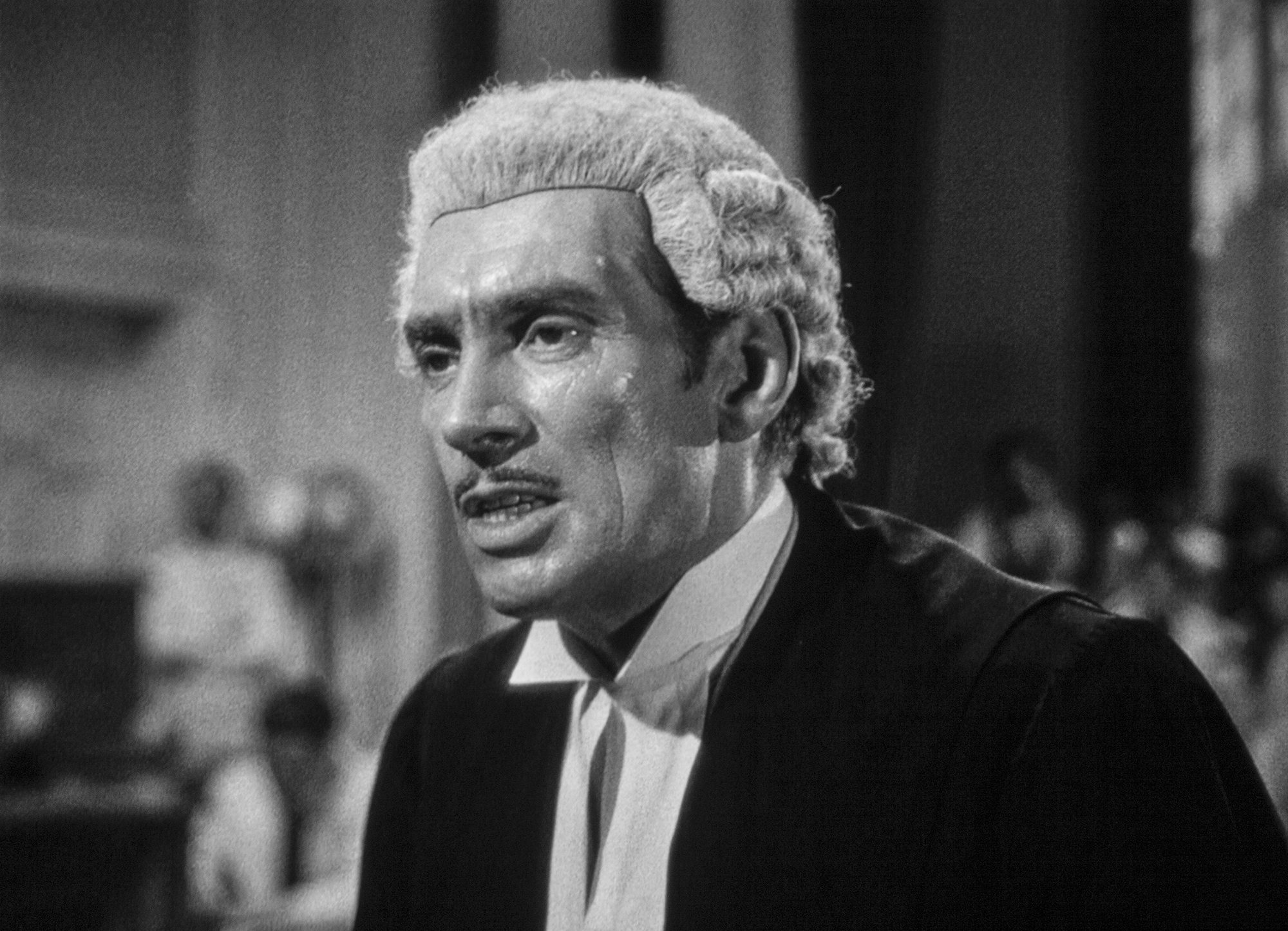 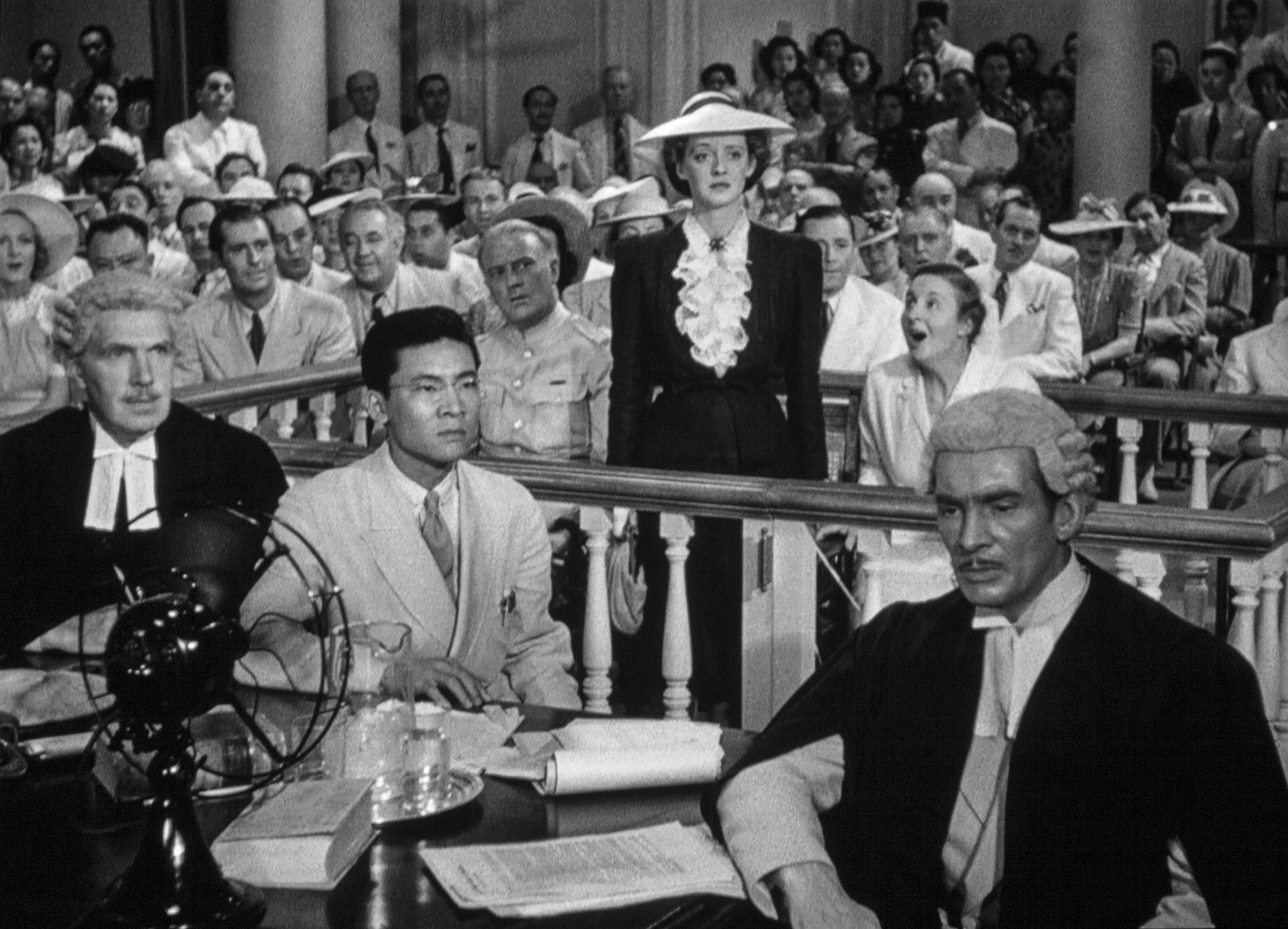 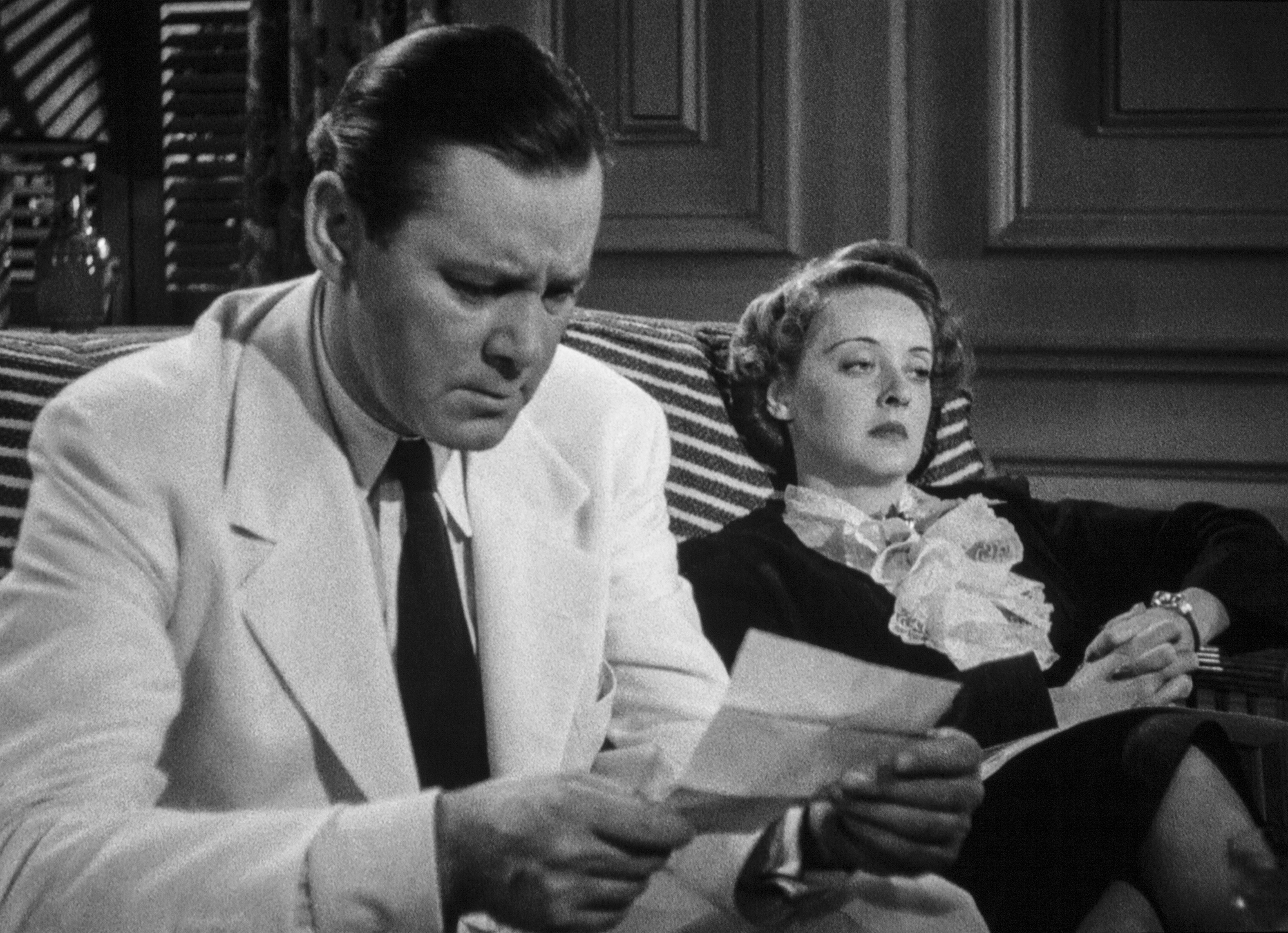 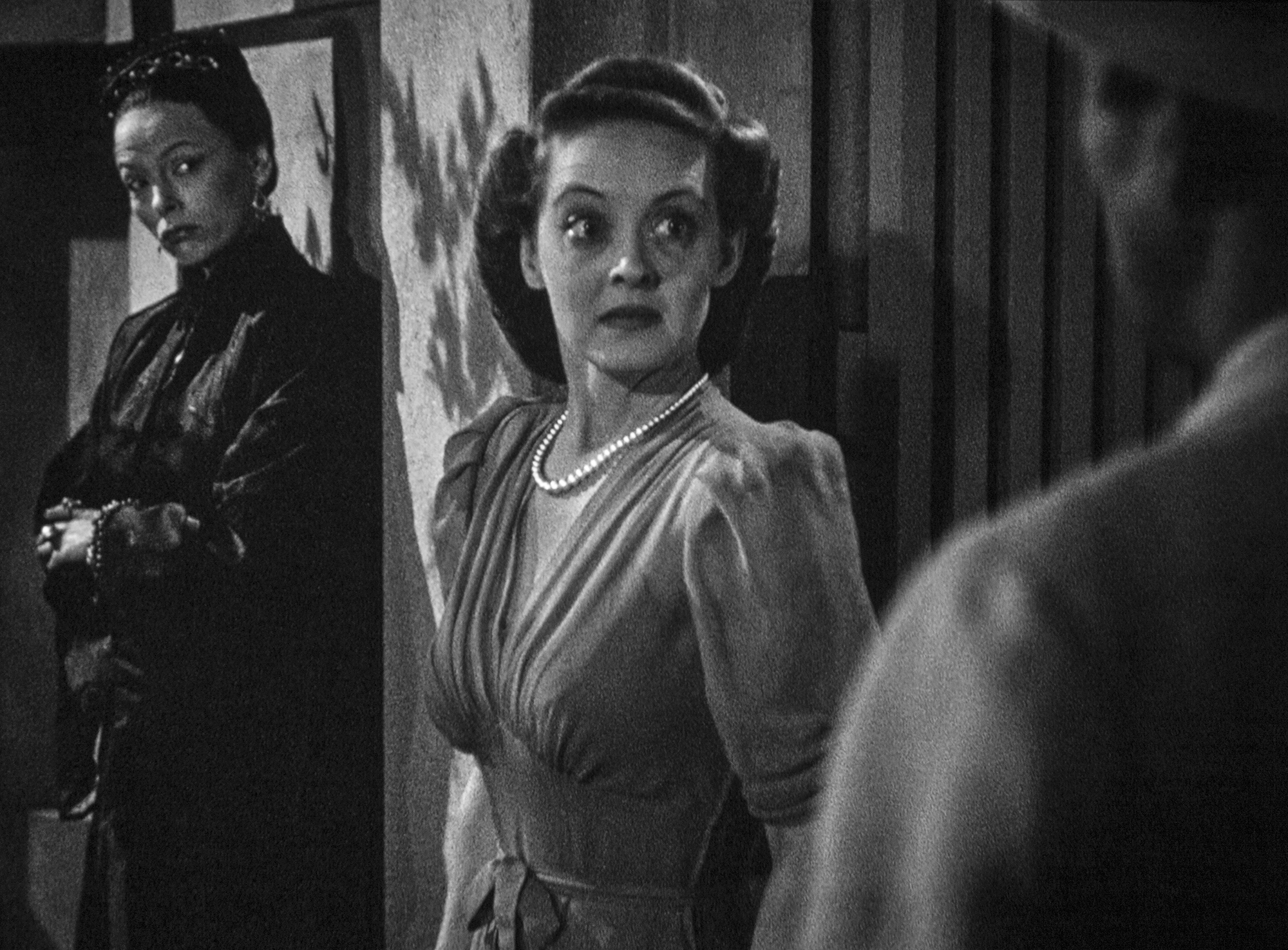 (1) A remorseful Howard Joyce makes the case for Leslie's innocence in court.  (2) Leslie awaits the jury's verdict.  (3) The truth comes out. Robert reads the letter purchased with his life savings.  (4) Leslie is found innocent, and a party is held to celebrate. But when she steps outside, the widow and one of her men are waiting for her.