Straightforward “Green Book” is an Oscar-winning journey to the heart

IT WAS a shock when “Green Book” won the Oscar for Best Picture – even though it had been an early front-runner racking up victories at the Golden Globes, the American Film Institute and the Producers Guild ceremonies.

A few weeks before the Academy Awards, bets favored Alfonso Cuarón’s (“Gravity”) Spanish language film, “Roma.” Cuarón had become a one-man-band who produced, wrote, filmed and co-edited “Roma” in striking black & white, winning an Oscar for Best Cinematography. It also won the British Academy of Film and Television Arts Award for Best Film; Cuarón was selected as Best Director by the Director’s Guild, another indicator.

“BlacKkKlansman” director Spike Lee stormed out of the Dolby Theater when Julia Roberts announced, “Green Book” won for Best Picture. Other Oscar attendees were upset as well. Later, Lee said the selection was a “bad call.” Richard Newby, guest columnist for the Hollywood Reporter, analyzed Lee’s actions: “It wasn’t arrogance or bad sportsmanship. It was an awareness of how little Hollywood has changed in the 29 years since “Driving Miss Daisy” won the best picture and Lee’s “Do the Right Thing” wasn’t even nominated.”

(1) Tony Lip started working as a bouncer at the famed Copacabana nightclub in 1961. (2) After a long night at the Copacabana and driving the club owner home, he arrives at his Bronx apartment at daybreak. (3) Tony hops into bed and rolls over toward his wife Dolores (Linda Cardellini).

That aside, “Green Book” received an 82 percent rating from top critics and was a huge crowd-pleaser. It actually made more overseas than in the U.S. – doubling its numbers – and finished at $243 million worldwide. Not bad for a film made for under $25 million. Some critics still dinged it as a feel-good buddy movie made from a white perspective, a safe movie-making formula for generations.

“Green Book” is based on the true story of African-American prodigy jazz/classical pianist Dr. Donald Shirley of Jamaican descent and leader of the Don Shirley Trio. He started playing the piano at age 2 and was highly educated earning a Ph.D. of Music, Psychology and Liturgical Arts. Shirley made his concert debut with the Boston Pops at 18, and the following year with the London Philharmonic Orchestra. He lived in a palatial studio apartment above Carnegie Hall in Manhattan. Mahershala Ali's performance as Shirley is superb, winning him his second Best Supporting Oscar in three years.

The story evolves around a road trip. Dr. Shirley needs a driver to get him from Point A to B to C and further on a two-month, cross-country concert tour. The driver must be able to handle anything a black performer/traveler might face as the tour heads into the Deep South of the early 1960s.

After interviewing a handful of applicants, he selects Italian-American Frank Anthony Vallelonga, aka Tony Lip, a working-class Bronx bouncer at the famed Copacabana. Viggo Mortensen delivers another first-rate performance, earning an Oscar nomination for the fast-talking, always eating, chain smoker. “Viggo embodied him in such a beautiful way with the accent,” Executive Producer Octavia Spencer says.

(1) Dr. Don Shirley interviews Tony Lip from his palatial studio apartment above Carnegie Hall. (2) Mahershala Ali won his second Best Supporting Oscar ("Moonlight") for his performance in "Green Book." (3) Record executives give Tony Lip a copy of "The Negro Motorist Green Book," which Dr. Shirley will need to find lodging during his concert tour into the Jim Crow South. (4) Tony tells Dolores goodbye as he heads on the two-month adventure with Dr. Don Shirley.

Tony isn’t completely unbiased; he throws two drinking glasses into the kitchen garbage can when two black plumbers drink lemonade after making a repair job in his apartment. His wife Dolores (Linda Cardellini) retrieves the glasses and washes them with the rest of the dishes.

Tony and Dr. Shirley hit the road and some rough spots as they get used to each other. Shirley demands Tony stop smoking inside the car. Tony teaches Shirley the joys of Kentucky Fried Chicken. They're more of a team when they head into the South, where they must use “The Negro Motorist Green Book” for safe passage throughout the Jim Crow South, but there are still plenty of problems to come.

The on-screen chemistry between Ali and Mortensen is undeniable and a pleasure to watch. The Oscar-winning screenplay delivers poignant and witty dialogue – especially as Dr. Shirley gives Tony tips on writing more personable letters to his “Dear Dolores,” initially spelled “Deer Dolores.”

“They just clicked and then they brought it in front of the camera,” Executive Producer Kwame L. Parker says in one of the three bonus feature extras. “Doc and Tony, as different as they are, they become like brothers. They fight, they argue like brothers and, in the end, there’s loyalty and real affection,” Mortensen says. “I can imagine how it must have been for those two men to take that journey together,” says Spencer. 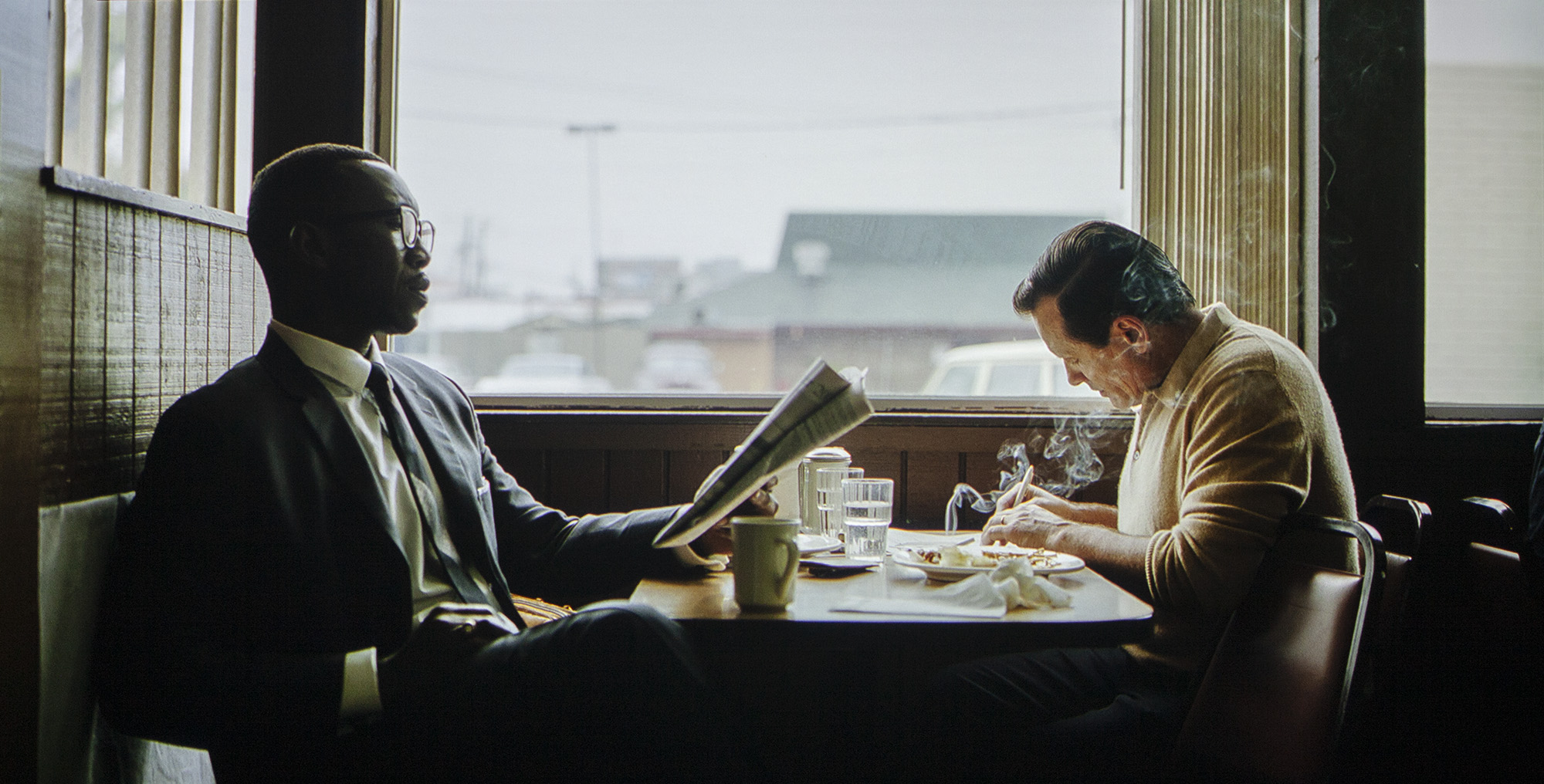 (1) Dr. Shirley demands Tony to stop smoking inside the rental Cadillac since it makes breathing difficult in the backseat. (2) The Don Shirley Trio perform at their first stop in Pittsburgh. (3) Heading into the Deep South. (4) During a dining break, Tony writes a letter to Dolores something he promised her since long-distance phone calls would be too costly. (5) Dolores reads one of Tony's letters to the boys Nick and Frank Jr.

Co-writer/producer Nick Vallelonga, son of Tony Lip, described Viggo’s performance as “Eerie. His mannerisms, the way he smokes … 'cause my father smoked a certain way … He’s got all of it down.” Nick describes how his dad first told him about the concert tour with Dr. Shirley. “This was a big story, something I had on my mind basically my whole life.” Nick recorded hours on audiotape of his father reminiscing about the trip. Nick’s mother kept all the letters she received. Visiting Dr. Shirley over the years, the pianist only had one request ̶ to wait until after his death before he published the story. Shirley died in the spring of 2013, a few short months after Tony Lip passed away.

Nick also recalls his first impressions seeing Shirley’s apartment at age 5 while visiting with his father. “He had a throne and these floor-to-ceiling windows. It was like Liberace meets Beethoven as he came out wearing this long African robe.”

“I wanted to honor their memory, but I also want to tell it truthfully.” ― Director/co-writer/producer Peter Farrelly

To prepare for his role, Ali trained with composer Kris Bowers, taking piano lessons to accomplish the look of playing. “I wanted to see what it felt like to sit at a piano and to have that dexterity … that the character obviously has to have,” Ali said.

Farrelly and cinematographer Sean Porter, with mostly shorts and documentaries on his resume, captured a beautifully visual film bathed in warm tones transporting viewers to the early ‘60s. Using 3.4K digital cameras, with an odd 2.00:1 aspect ratio, it has the look of being mastered in 4K or maybe a straight 3.4K master. IMDb says it’s only 2K, but the disparity between the 4K (disc and streaming) and the HD version is obvious. The 4K provides a higher level of fine detail – especially in distant objects. For example, when Tony pulls their rented Cadillac into a parking spot in Macon, Georgia, we can easily make out its New York license plate: 30-1135. The numbers more or less disappear in the HD version. The majority of “Green Book” was shot in New Orleans and its surrounding areas, except the scenes at Carnegie Hall.

Another oddity, the HDR toning is somewhat different than most presentations. Normally the 4K will be slightly darker since the overall contrast levels are greater and the format produces expansive light levels from highlights to shadows. With “Green Book,” the interiors on 4K and HD are nearly identical, but once outside in sunlight in front of Carnegie Hall, an entrance to a hotel in Memphis, and the street scene in Macon, the 4K is brighter. It still looks great and controlled without any blown-out highlights, but different than the HD. Personally, I would’ve toned it down a notch. The overall rich color palette with the 4K and HD are similar.

(1) The Don Shirley Trio. (2) Dr. Shirley is assaulted in a Louisville bar. (3) Dr. Shirley always sat in the backseat of the car. (4) Tony is pulled over by a small-town cop and he and Dr. Shirley end up behind bars after Tony punches the officer. (5) "You never win with violence, Tony. You only win when you maintain your dignity. Dignity always prevails," says Dr. Shirley.

Dr. Shirley stands his ground before the final show of the tour in Birmingham, Alabama

The 4K disc and Blu-ray both feature the Dolby Atmos wall-to-ceiling eight-channel soundtrack, while streaming sites use the lesser compressed Dolby Digital Plus. The height speakers are used sparingly, mostly for effects and several times for an expansive concert sound.

Musical tracks from the Don Shirley Trio are toe-tapping and lively including the film’s signature tune, “The Lonesome Road,” performed by composer Kris Bowers. The same with Irving Berlin’s classic “Blue Skies,” “Lullaby of Birdland” and Shirley's top 40 hit “Water Boy,” all performed by Bowers.

A number of ‘60s pop songs are used throughout including “Lucille” performed by Little Richard, “Won’t Be Long" by Aretha Franklin, “Slow Twisting” by Chubby Checker, “So Long Lover’s Island” by the Blue Jays, “A Letter From My Baby” by Timmy Shaw, “Pretty 'Lil Thing” by Sonny Boy Willamson, and “You Took Advantage of Me” by the Blackwells. There is great ambient sound and more tunes in the roadhouse where Dr. Shirley and Tony stop for a bite of food during their Christmas Eve trip back to New York City. The Orange Bird Blues Band provides the grooves.

“Green Book” is a keeper, holding true to a number of universal themes. “Friendship and love and acceptance will always be relevant no matter what time you’re in,” Mahershala Ali says.

(1) Dr. Shirley joins the Orange Bird Blues Band at a roadhouse during their trip back to New York City. (2) During the trip back to the Bronx, Tony and Dr. Shirley have a flat tire in a snowstorm on Christmas Eve. (3) Tony introduces Dr. Shirley to his family.