Furry fun returns in “The Secret Life of Pets 2”

A new baby arrives in Max (Patton Oswalt) and Duke's (Eric Stonestreet) family. It’s the most wonderful thing – but it’s also the scariest thing in Max’s life, because he wants to keep little Liam safe.

“THE SECRET LIFE OF PETS 2”

Best extra(s): Two mini-movies and “Character Pods” with actor interviews on their characters

THE ILLUMINATION pets are up to mischief again. We learned about “The Secret Life of Pets” in the 2016 film. Now they’re back.

Max and Duke, voiced by Patton Oswalt, who replaces Louis C.K,  and Eric Stonestreet respectively, are in the middle of a huge life change. Their human Katie is now married, and there’s a baby, Liam. It takes time for the dogs to understand the attention that once centered on them takes second place to the newcomer. But soon, they come to adore Liam, who loves them  and, in his toddler way, wants to be just like them. In fact, Max becomes so protective, he develops deep anxiety issues. Here comes the vet visit and the cone of shame to help with subsequent scratching issues.

“It’s a kind of a celebration of the love between a parent and a child, and a pet and a child. There’s nothing more pure than that.” — Brian Lynch, writer

(1) This is Illumination's 10th animated film, and its first sequel outside of the "Despicable Me" series.  (2) Pet mom Katie (Ellie Kemper) meets her future husband Chuck (Pete Holmes).  (3 & 4) They all live happily together ... until Liam is born. Now the dogs must share their human's affection with the baby.

When the family prepares to leave on a trip to a relative's farm, Max asks sweet Pomeranian Gidget (Jenny Slate) to look after his favorite toy. She is excited to show her unrequited love what she can do – except the ball falls into the resident cat lady’s apartment. Gidget must turn to neighbor cat Chole (Lake Bell) to learn “the way of the cat” to get it back. Gidget's adventures provides some of the film’s best laughs.

“Chloe’s core values revolve around herself. I don’t judge her for her independence and her ways." — Lake Bell, “Chloe”

Then there’s manic rabbit Snowball played by the magical Kevin Hart. Snowball, who once ruled New York City’s underworld of  abandoned bets, now lives the cushy life with the little girl who rescued him. “The feeling that Snowball gets from his owner is one of love and compassion. Regardless of what you see on the outside, that’s what he loves, that’s what he wants,” Hart says.

His little girl dresses Snowball as a superhero, with a jumpsuit and cape – and the bunny loves it! So when newcomer Daisy, a Shih Tzu voiced by Tiffany Haddish, arrives looking for super-help to rescue a white tiger cub named Hu, Captain Snowball is ready for action. What he is not ready for is the evil Russian circus owner Sergei (Nick Kroll) and his pack of killer wolves. Sergei is a nasty one, who whips and tazes the poor cub. He turns a gun on the pets. It’s intense, scary action for little ones  under eight years. Upsetting to some adults, too, so be warned. 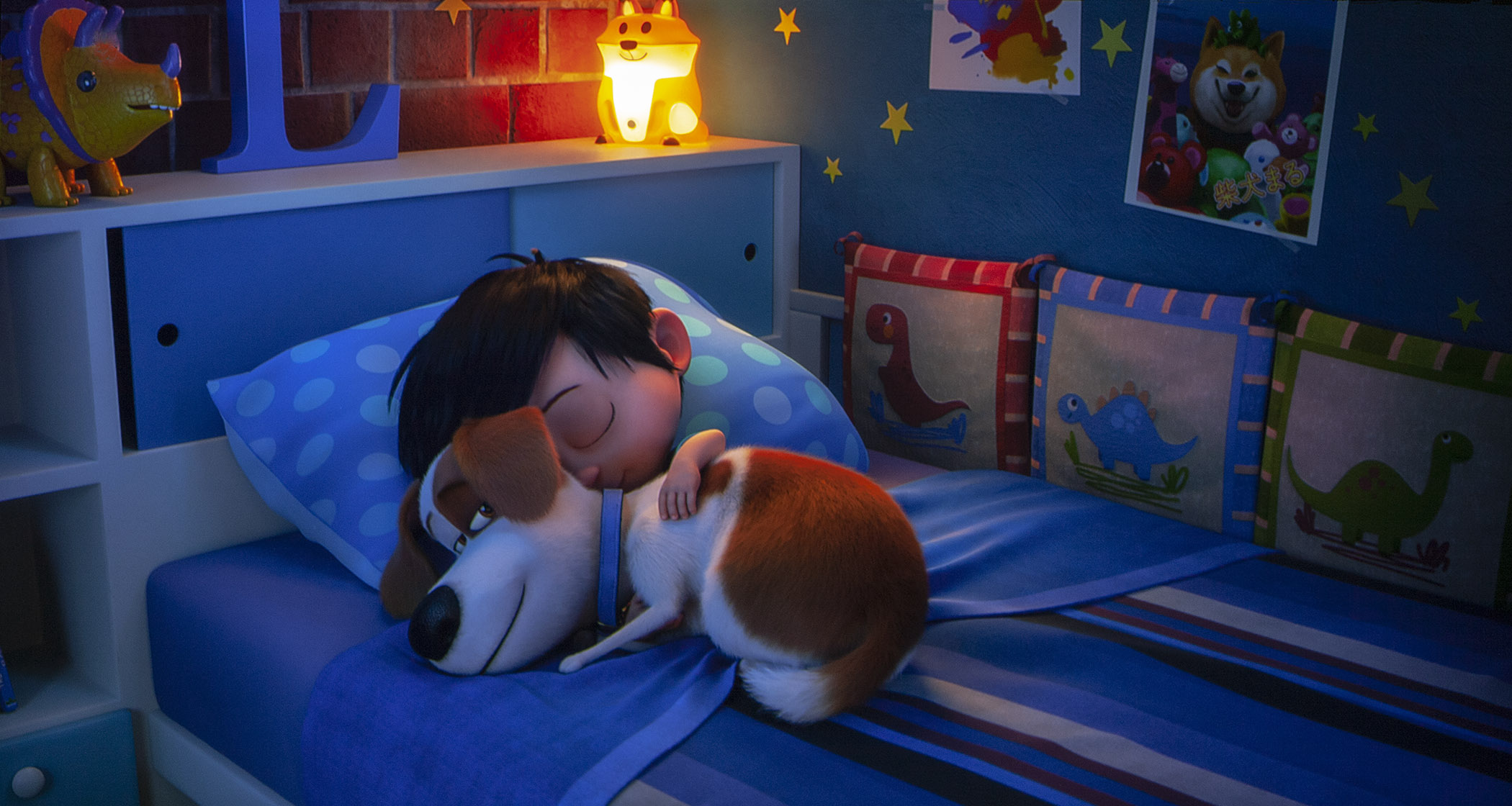 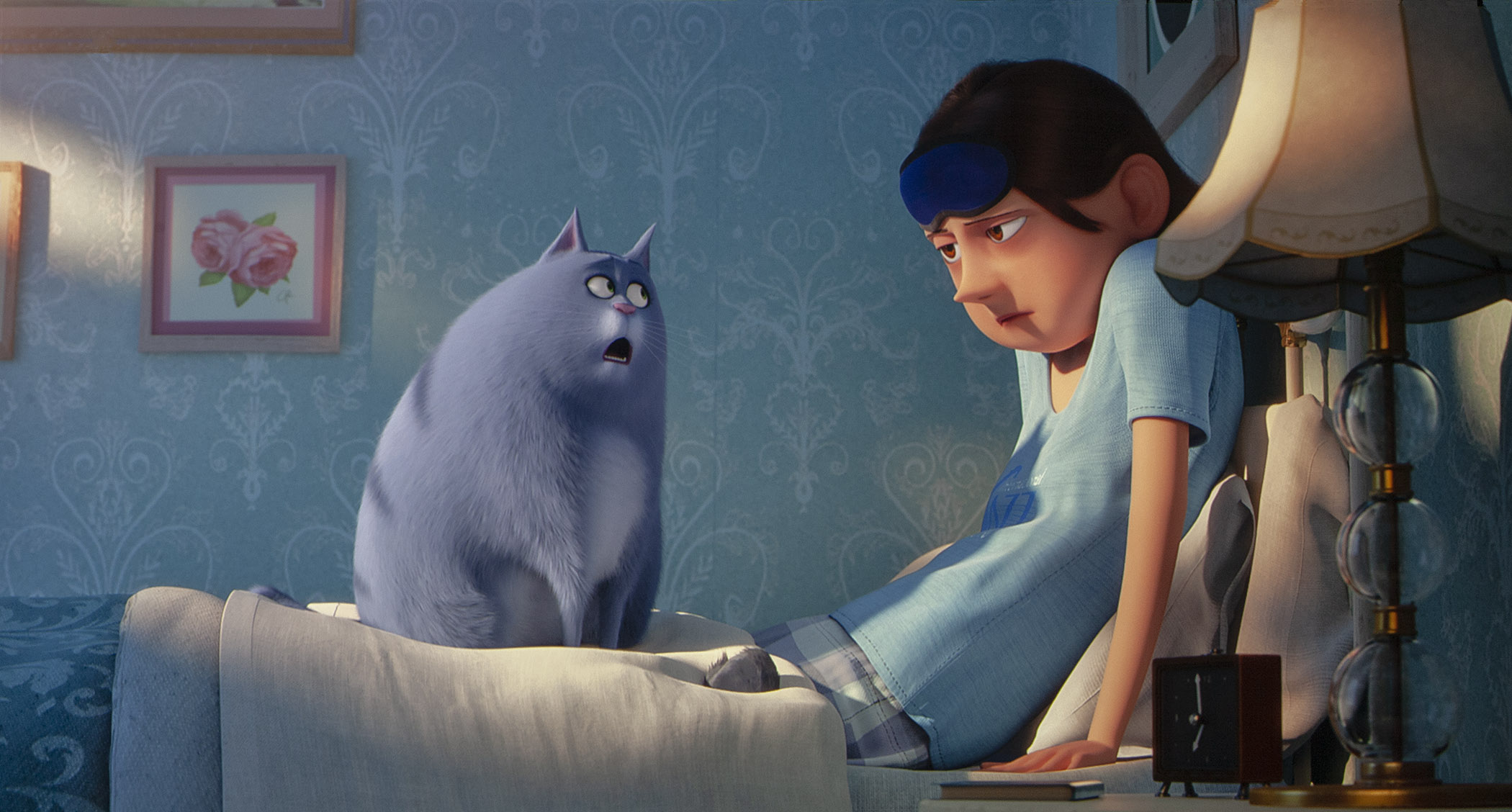 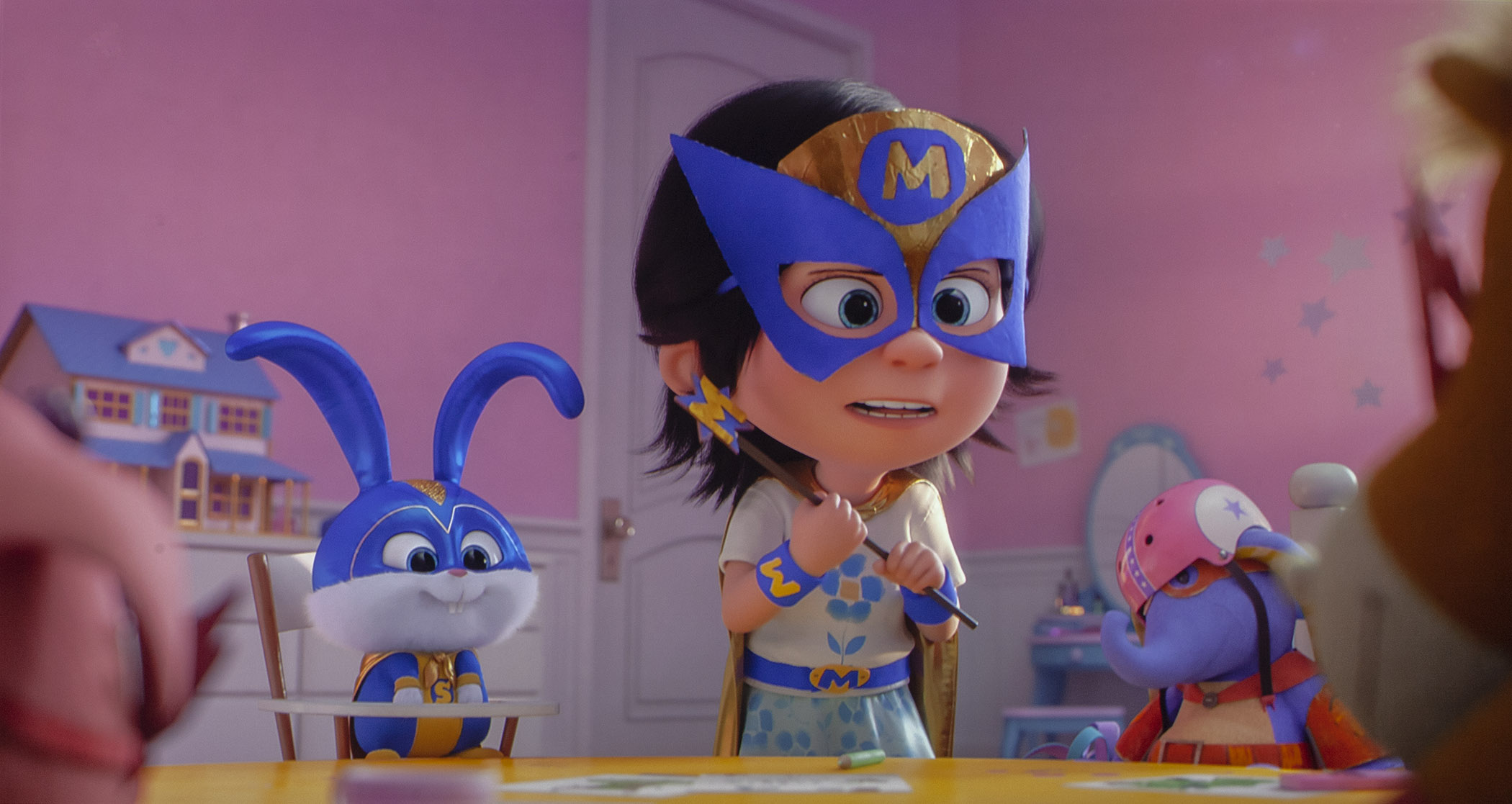 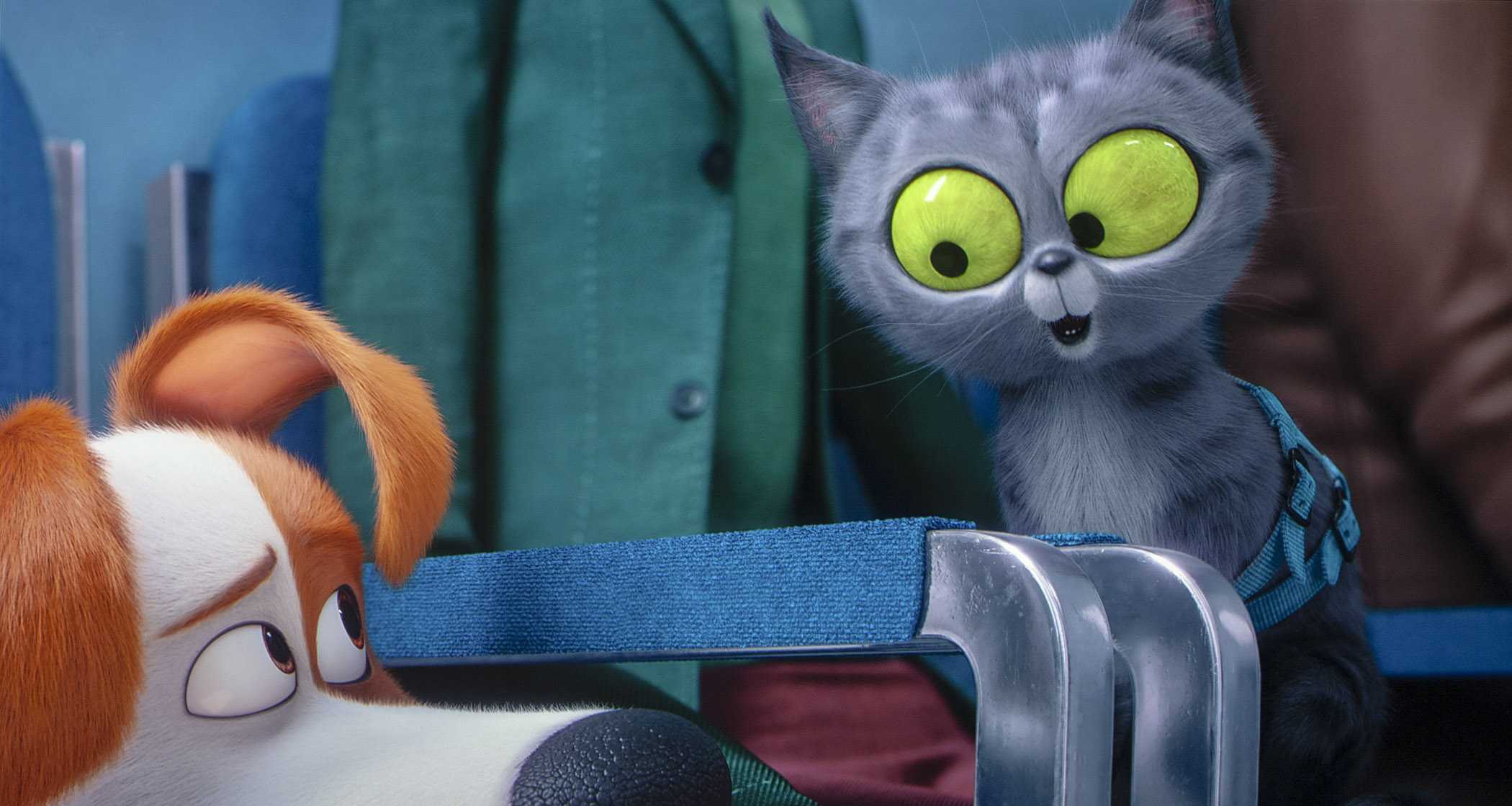 (1) But Max and Duke quickly grow to love the little guy.  (2) When it's time for breakfast, Chole has ways to get her owner's immediate attention.  (3) Snowball (Kevin Hart) becomes a superhero with his owner Molly.  (4) Max meets a neurotic cat at the vet's office.

“Daisy is just gung-ho, a take-life-by-the-teeth dog. I love how resourceful she is. She has compassion, she cares about others and she’s a hero.” — Tiffany Haddish, “Daisy”

“It was ridiculously easy. The dog has a human voice. I mean, they based the dog on me. I’m not really gruff in real life, but the dog in me, maybe, is a little abrupt.” — Harrison Ford, “Rooster”

Meeting Rooster helps Max grow, to let Liam be a kid, make his own mistakes and learn. “It’s very much a journey that parents can identify with,” says Chris Meledandri, Illuminaton Founder and CEO. “It’s that challenge of realizing that your role is not to protect [your children] from everything in the world. It’s really to prepare them to live on their own.”

Max, Duke, Gidget, Snowball, Daisy and all the pets are reunited back at their NYC brownstone by the final act. They’ll take on evil Sergei and rescue Hu. It's hilarious, but you’ve got to see it to believe it. 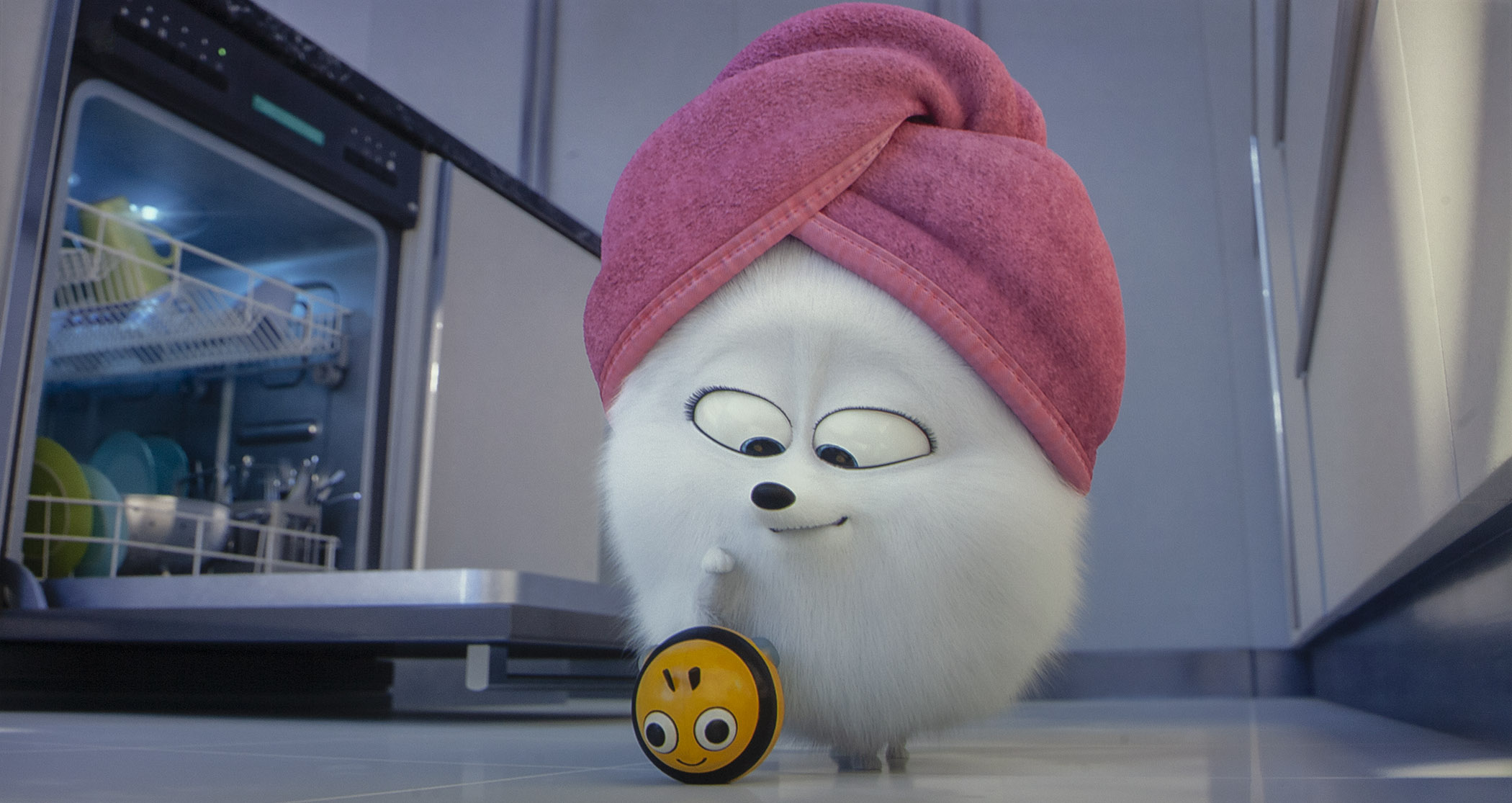 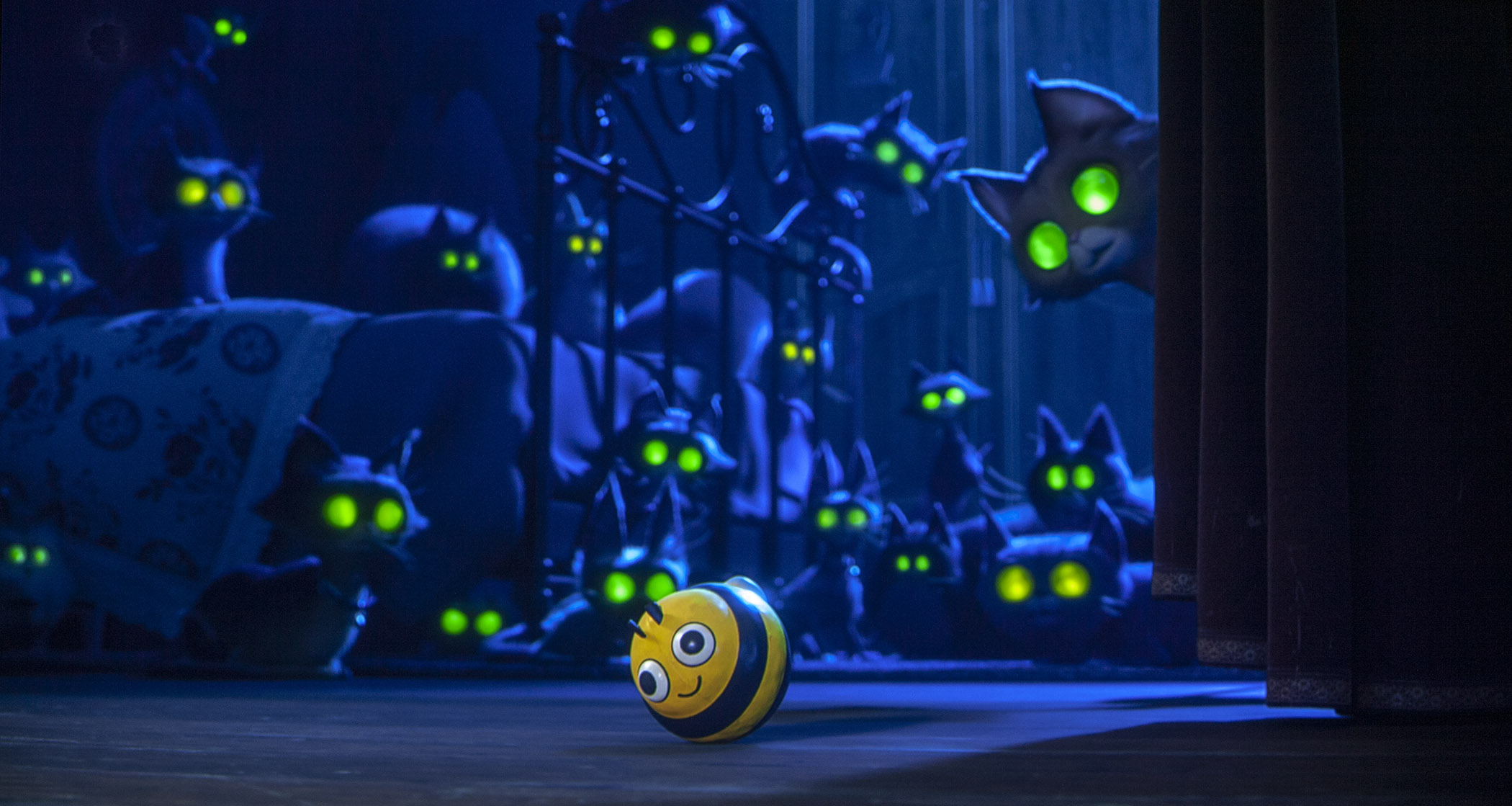 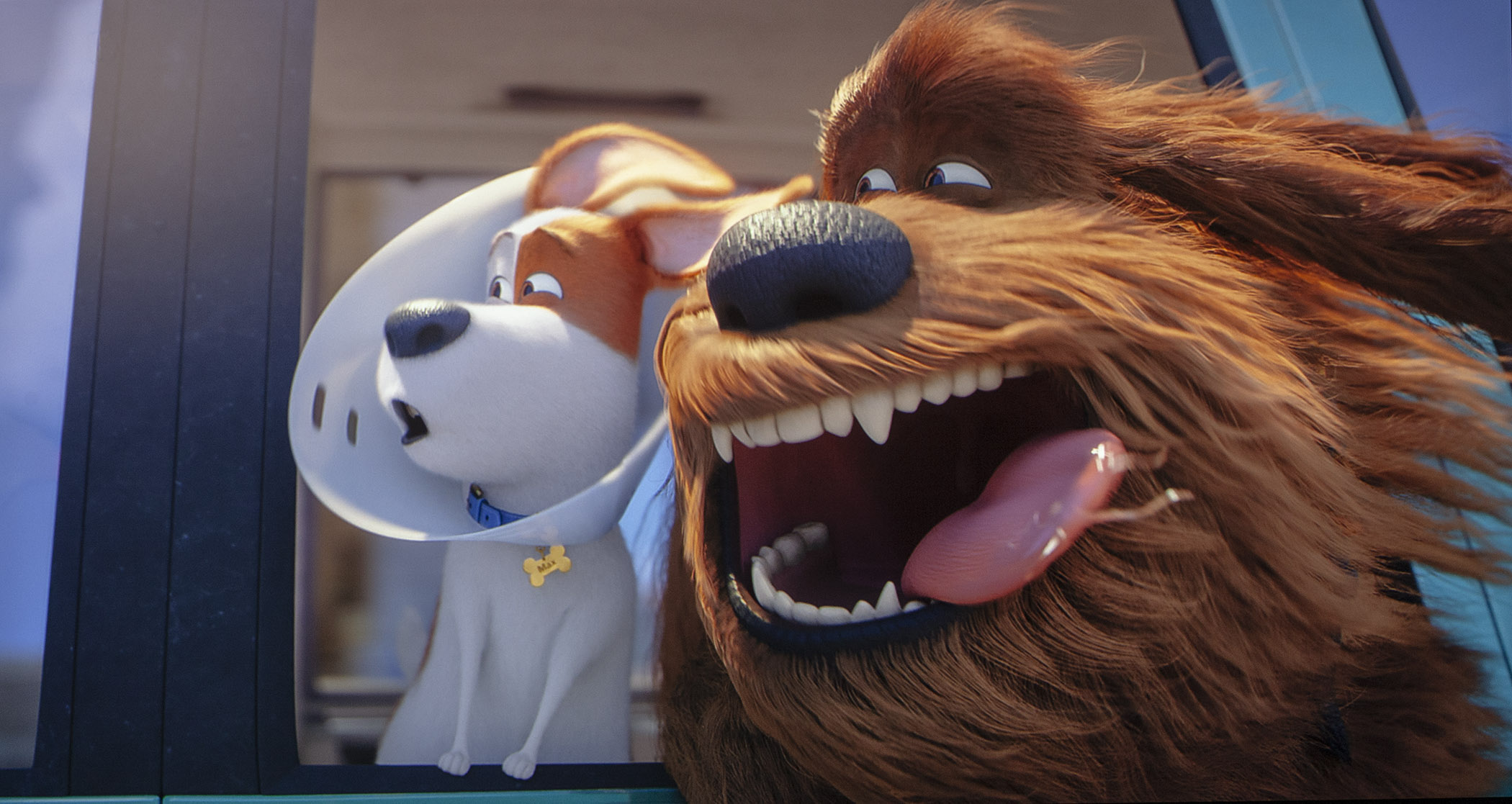 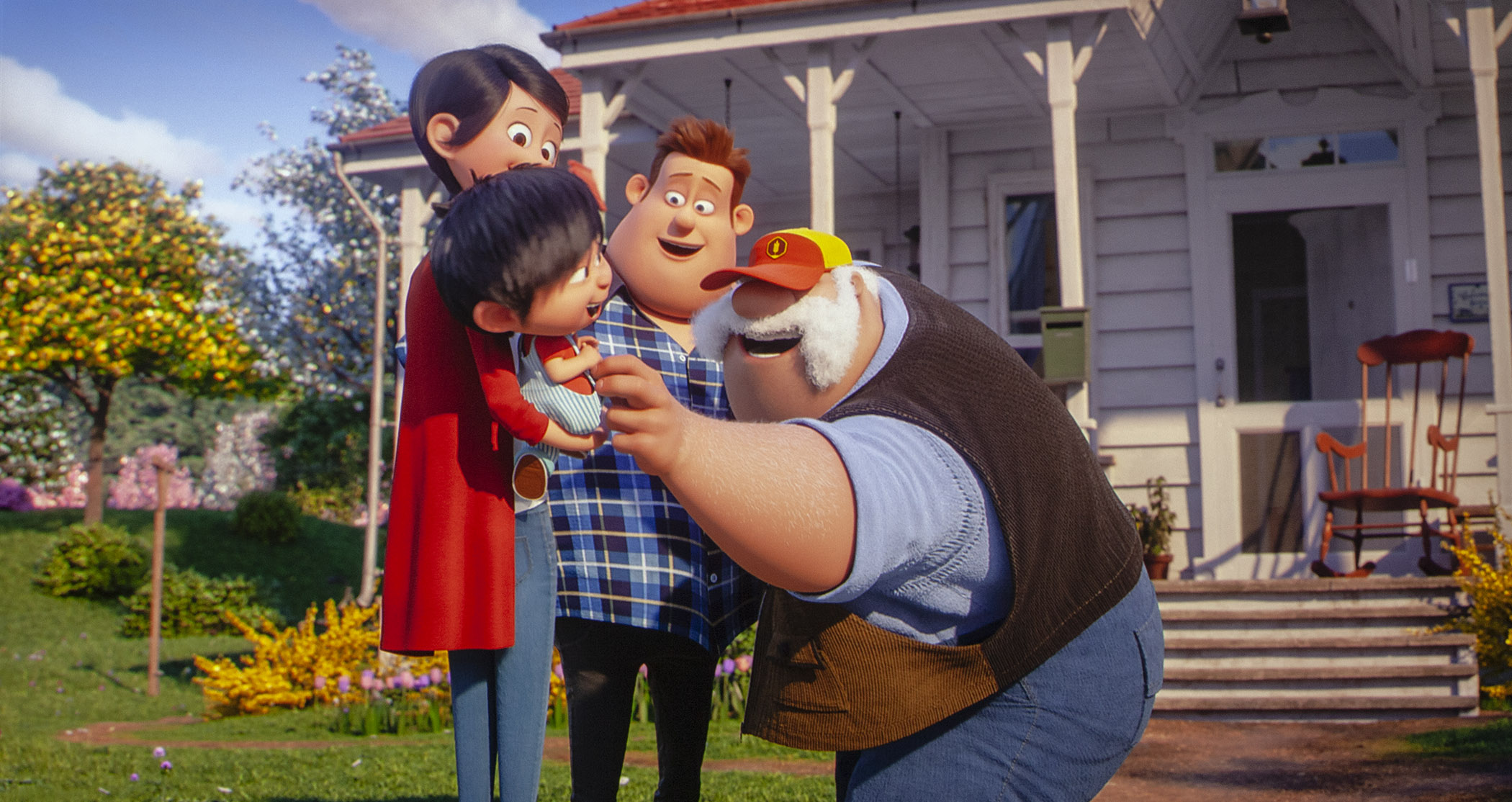 (1) Max asks Gidget (Jenny Slate) to take care of his favorite toy, Busy Bee, while he and his family visit relatives in the country. She is so happy ... (2) Until she loses Busy Bee in the resident cat lady's apartment!  (3) Max and Duke love their car ride to the country.  (4) Liam, Katie and Chuck say "hello" to Chuck's uncle.

We get a lot of bang for our time and money with a mere 86 minute runtime. The 2160p and 1080p have a 1.85:1 aspect ratio. It’s looking very good on standard Blu-ray, but the 4K Ultra HD with Dolby Vision and HDR10+ is a stunner. Animated films always shine in this format, and “The Secret Life of Pets 2” is no exception.

Color, depth and contrast look amazing. Yes, the color is more vivid and nuanced; detail is definitely more extreme. There’s a big upgrade on texture in fur and on the pets’ noses. The eyes shine!

We love a well-balanced soundtrack and Universal’s Dolby Atmos and Dolby Surround 7.1 channel tracks deliver. Dialogue is clear, and effects both ambient and special – trains, cars, fights – ring around the room. Height effects are good, without blowing the ceiling down.

What a package – cartoons, kid games, featurettes, interviews, mini-docs. They’re super-short, but entertaining. “Super Gidget” and “Minion Scouts” are two cute mini-movies, followed by “The Making of the Mini-Movies.” There are three deleted scenes in various forms of completion.

“A Tapestry of a Tail – The Making Of” shows how the sequel was created; “Character Pods” feature interviews with the actors on their characters; “My Buddy and Me” shows the cast and crew with animals as they discuss their first pets, and “Production Pets” is a photo stream of animals. “Pets with Jobs” takes a look at real working animals.

“How to Draw,” “Frame by Frame – How to Make a Flip Book,” and “The Further Adventures of Captain Snowball” are child-friendly activity options. So is “A Party Fit for a Pet,” with instructions on making treats, costumes and decorations.

“The movie’s about facing your fears.” — Brian Lynch, writer

There are good laughs and good messages to be found in “The Secret Life of Pets 2.” What’s best are the repeat views. We saw it in theater, and enjoyed it even though we felt it didn’t quite hold up to the first film. Then we found ourselves talking about our favorite “Pets 2” scenes and characters. Now it’s on repeat on the player, and gets better every time we watch it. Recommended. 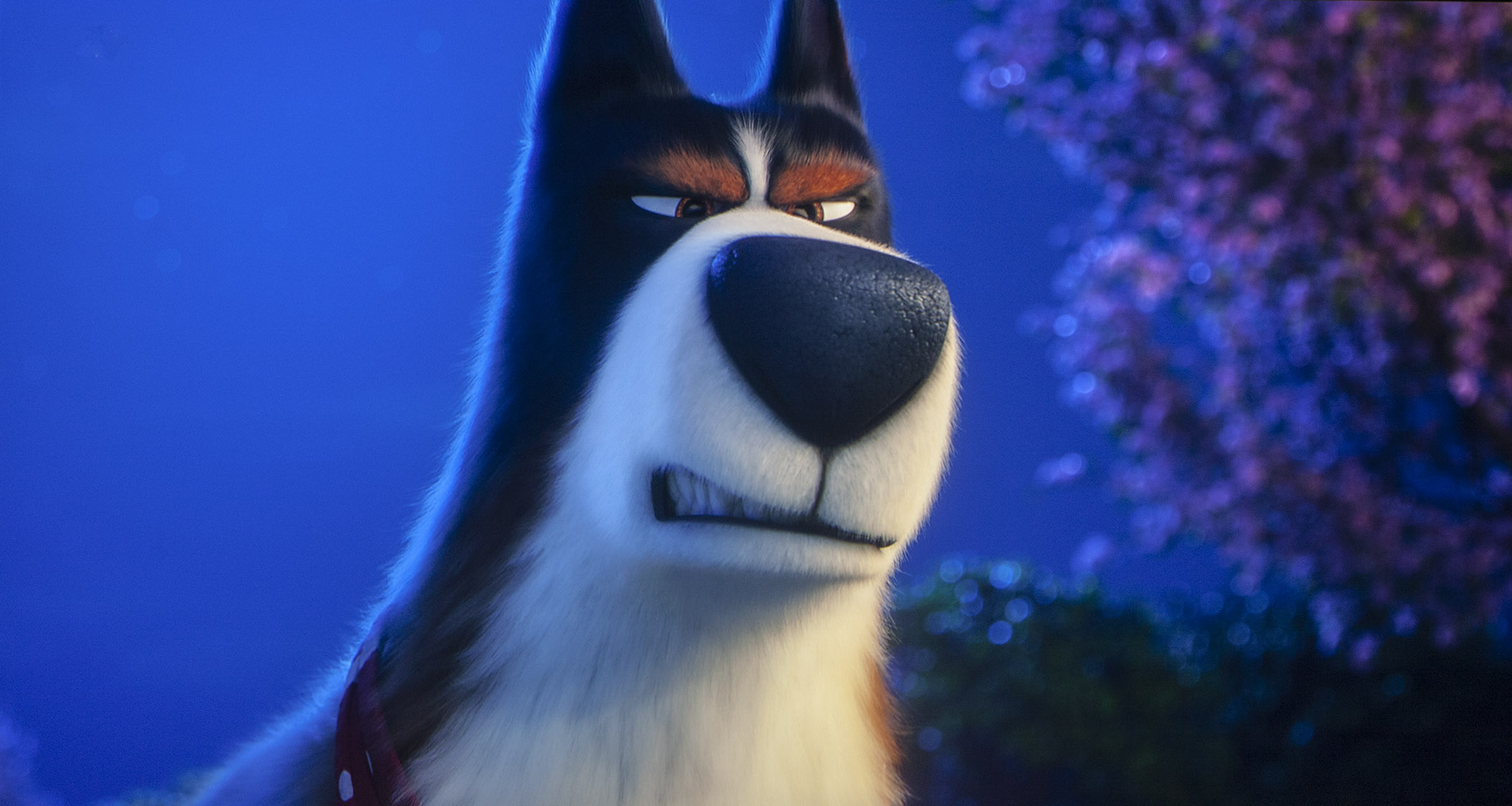 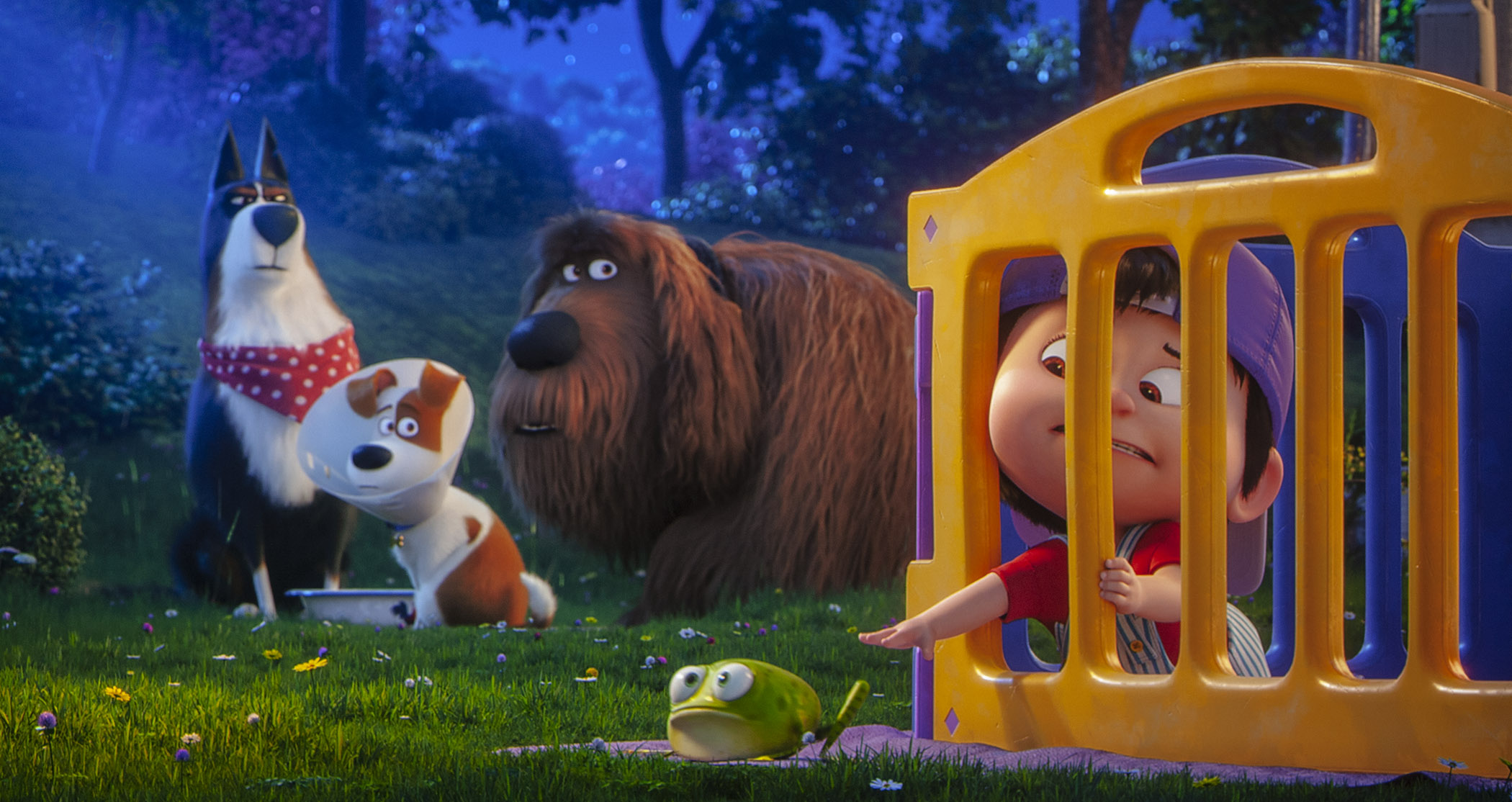 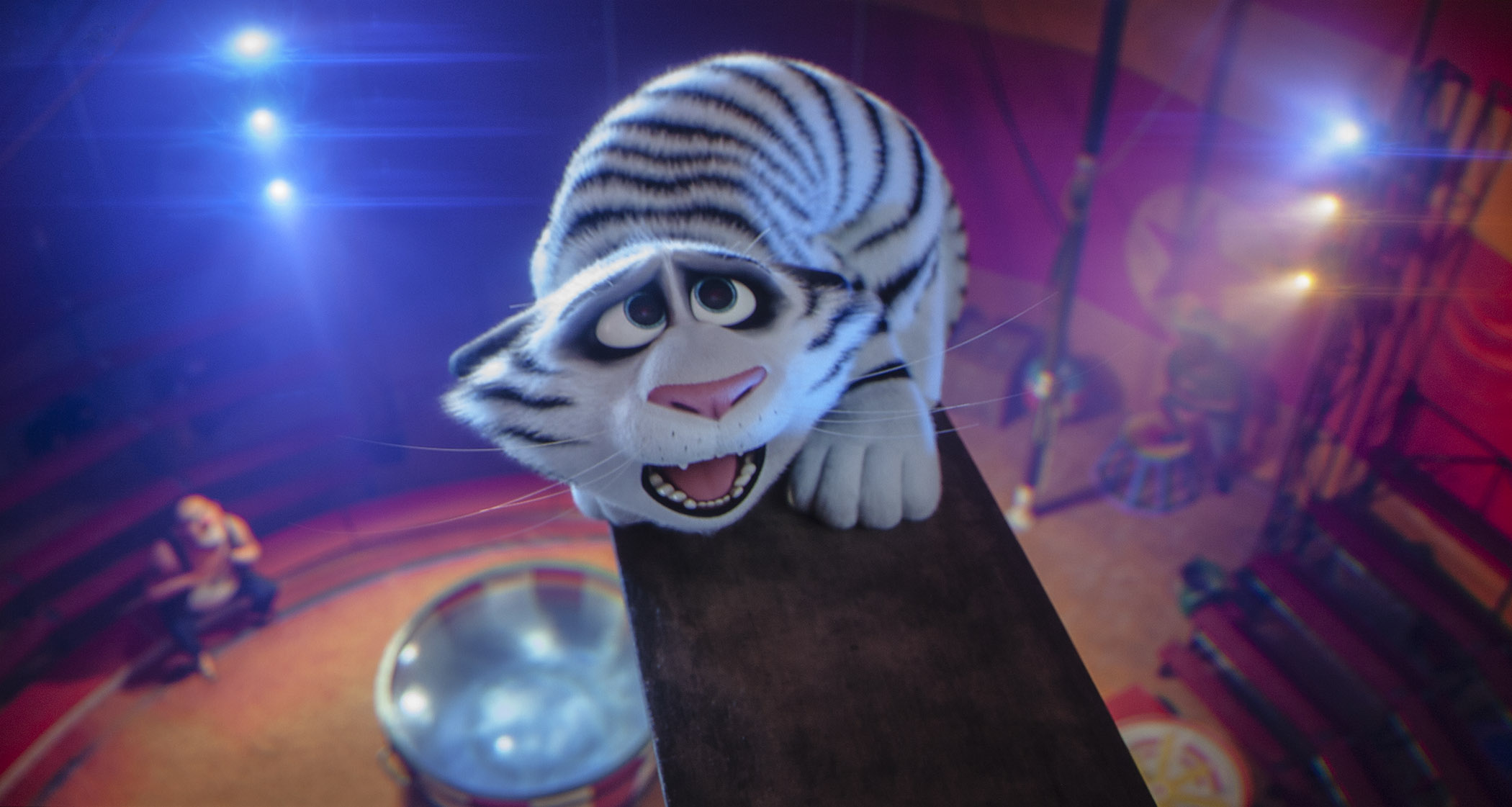 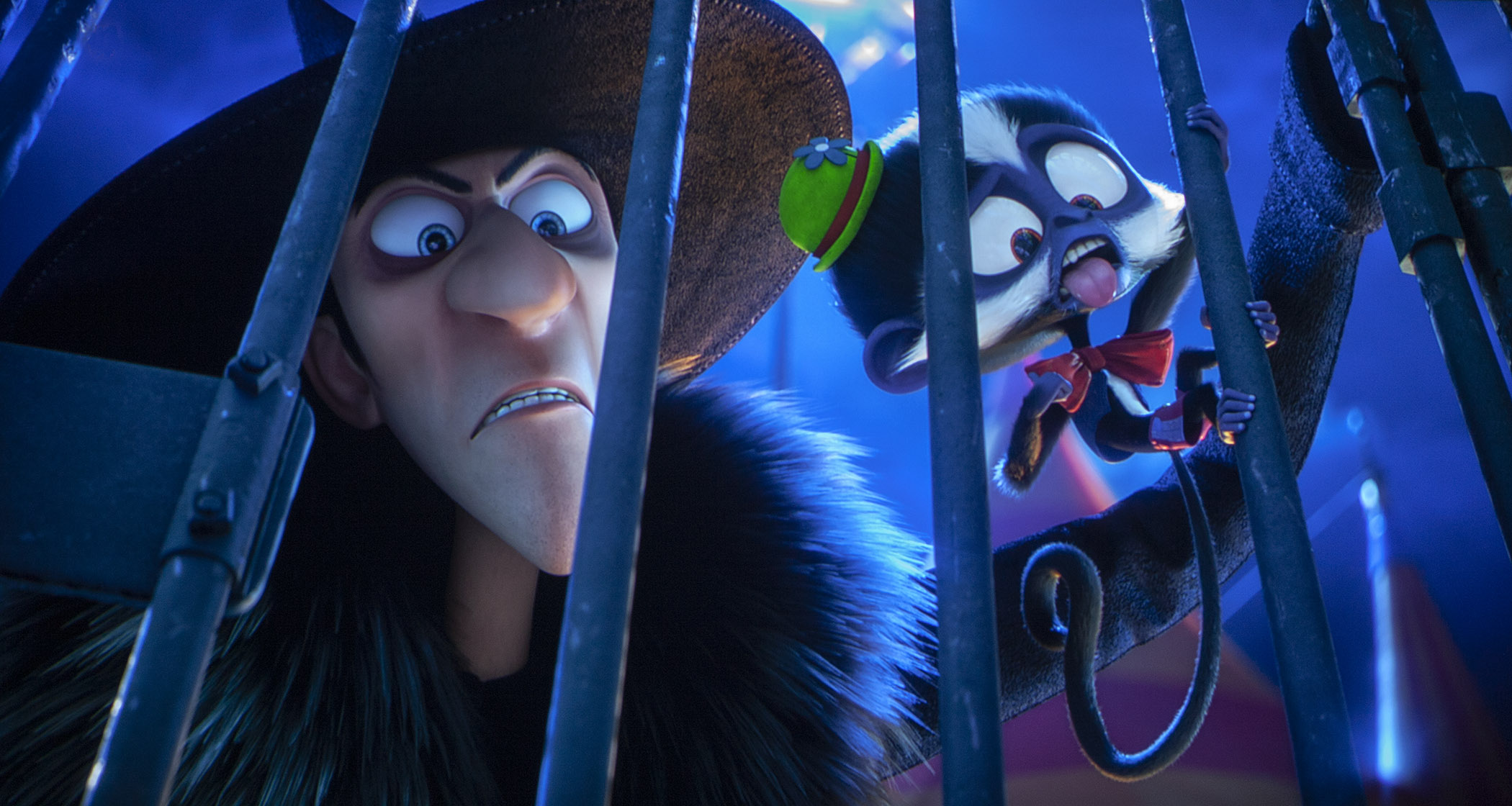 (1) Shepard Rooster is Harrison Ford's first animated film role. “Rooster is the top dog on the farm. He’s pretty much in charge of all the animals and makes sure that they’re all safe, and they’re all taken care of and oriented,” he says. (2) "Why is the kid in a cage? Is there something wrong with him? Does he have the fever?" Rooster asks.  (3) Frightened tiger cub Hu is forced to perform in the circus.  (4) Evil ringmaster Sergei (Nick Kroll) and his equally evil monkey torment Hu.  (5) Sergei's wolf pack. 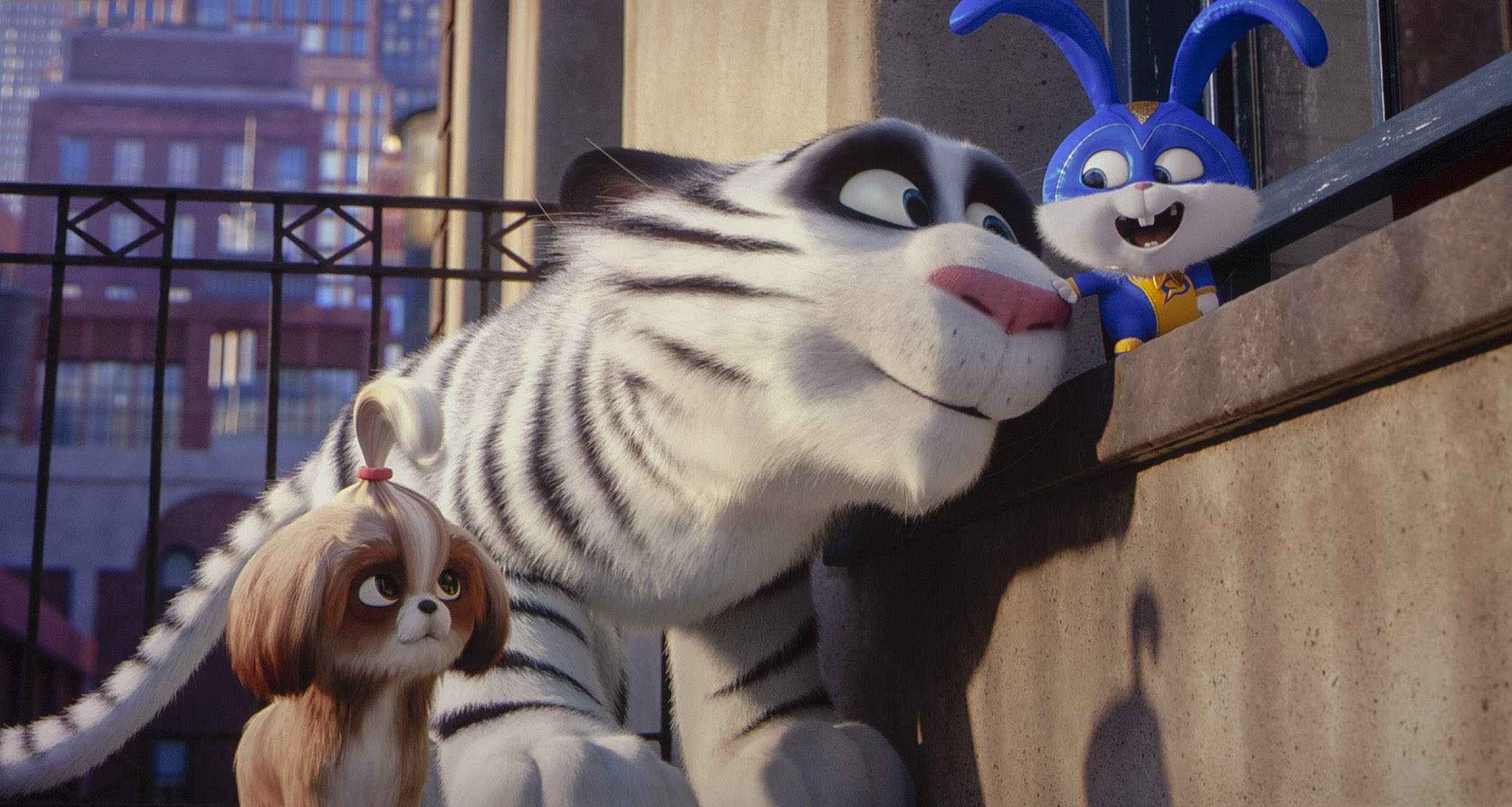 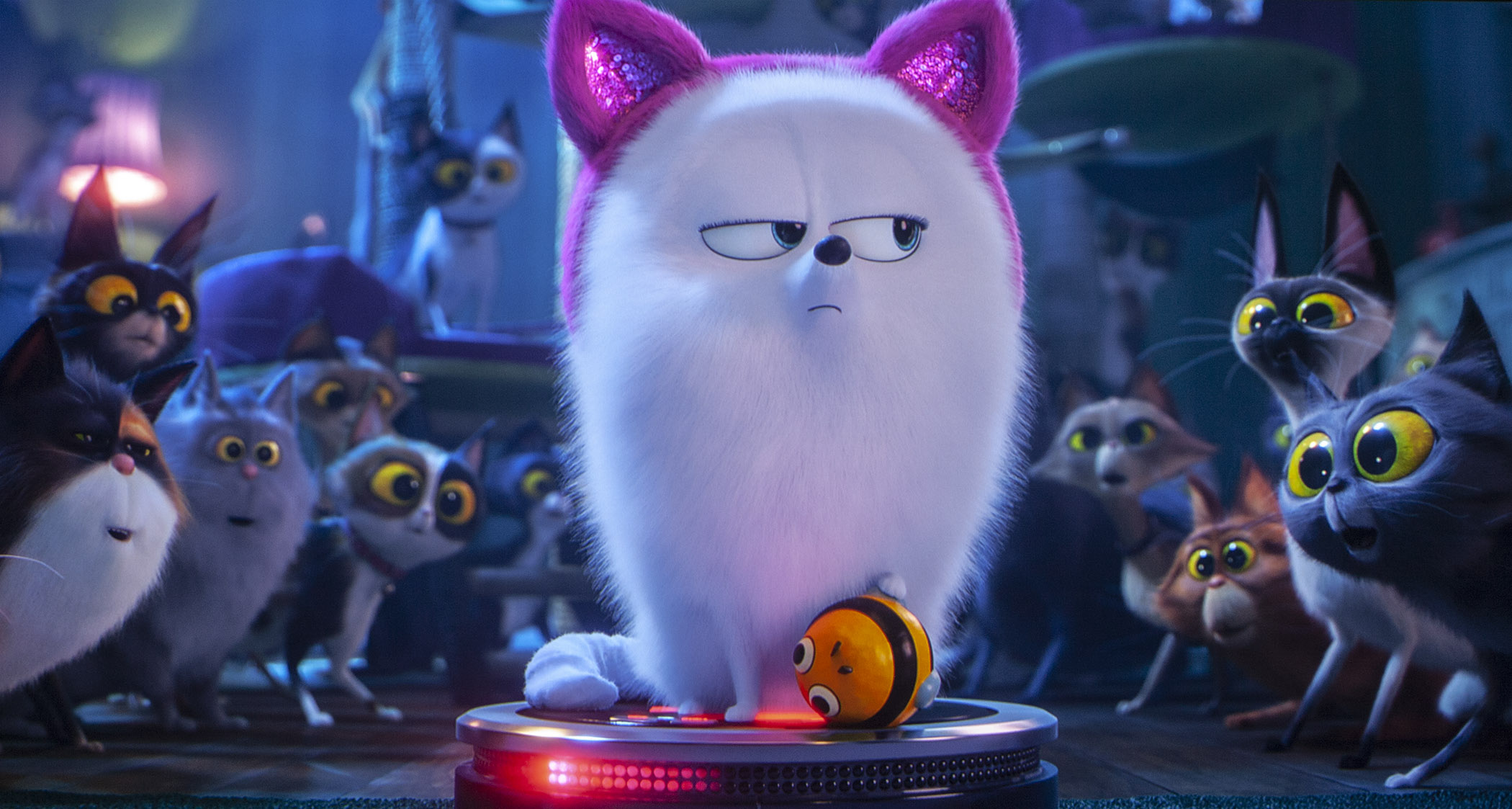 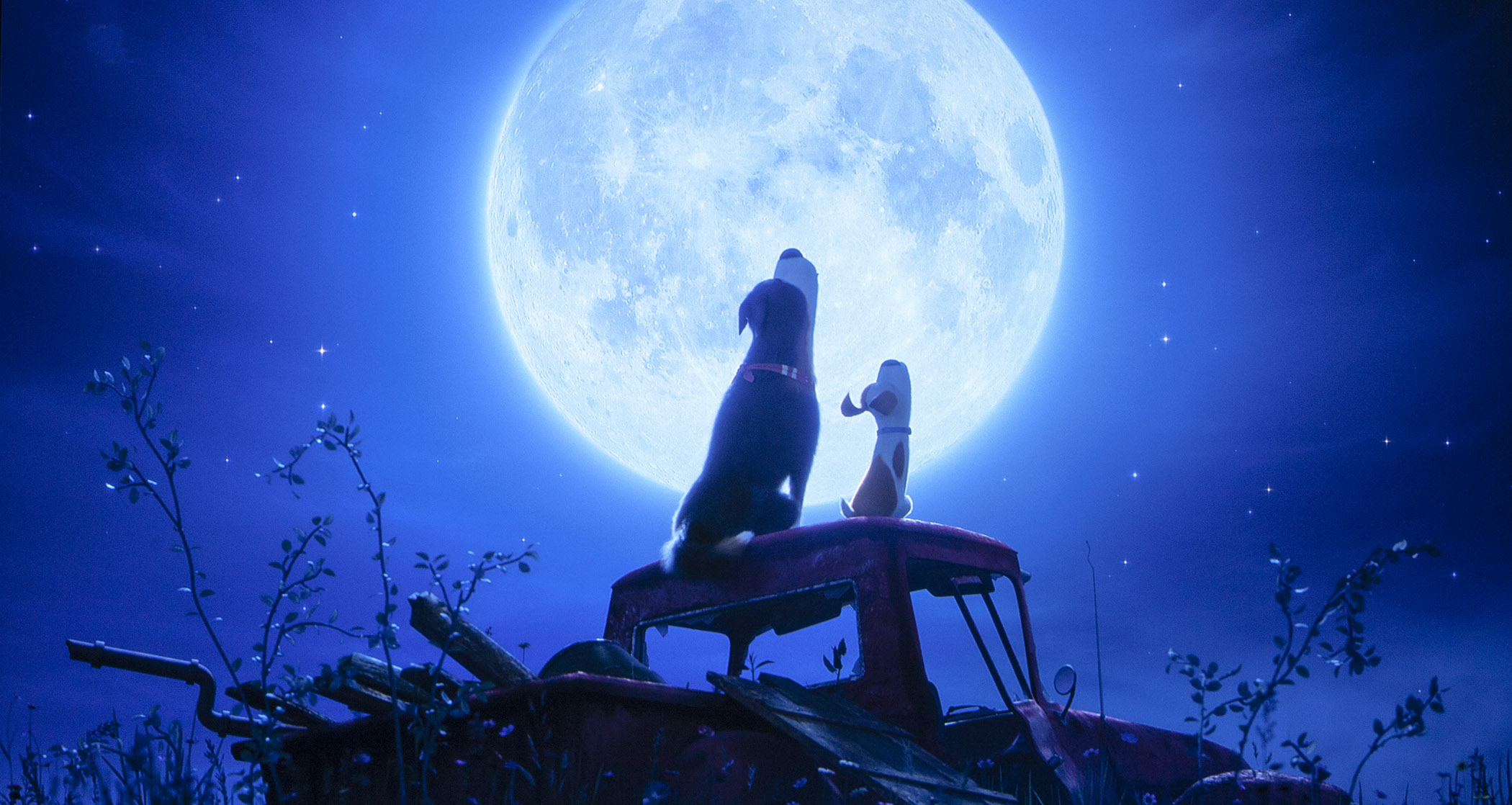 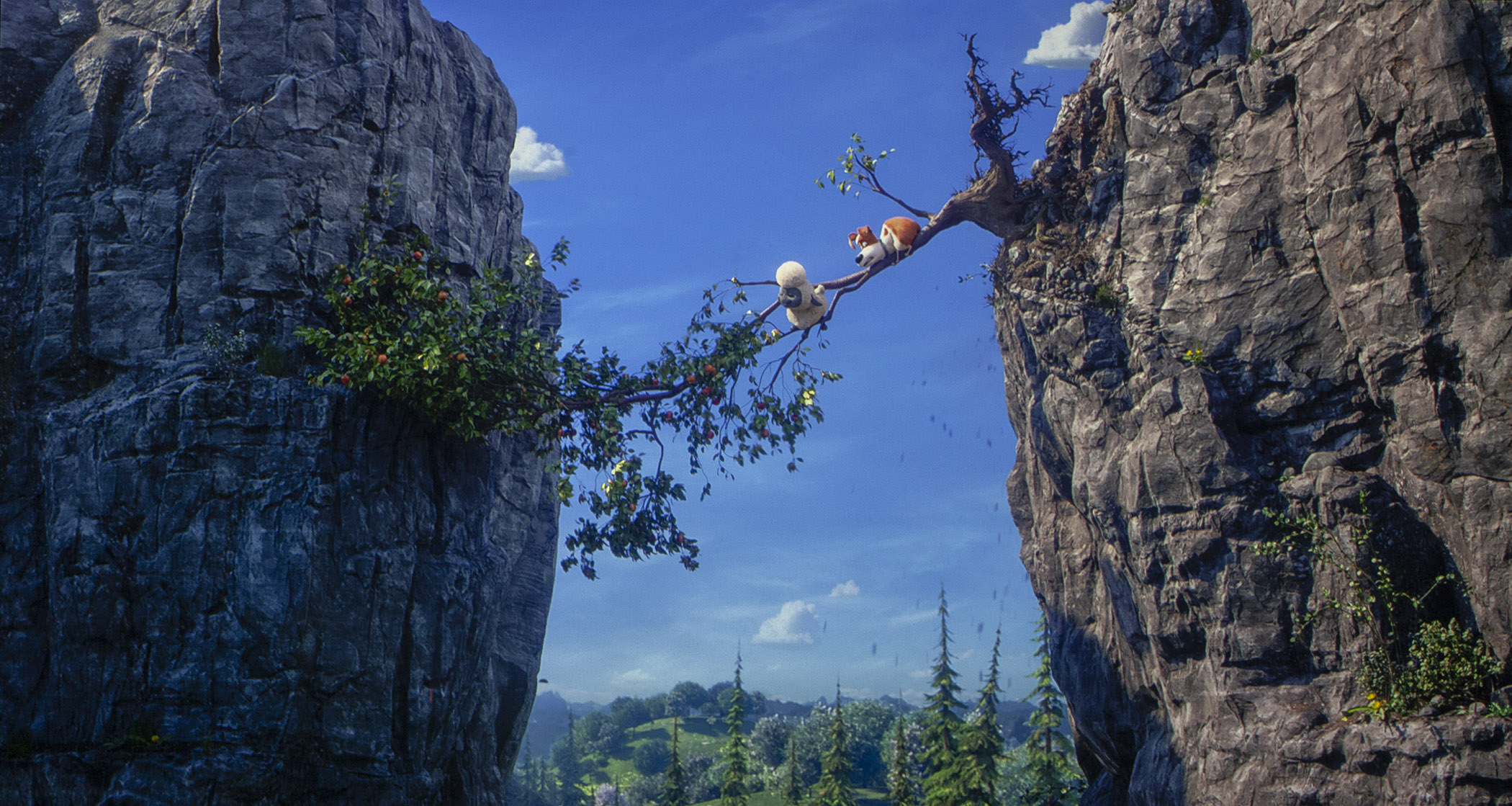 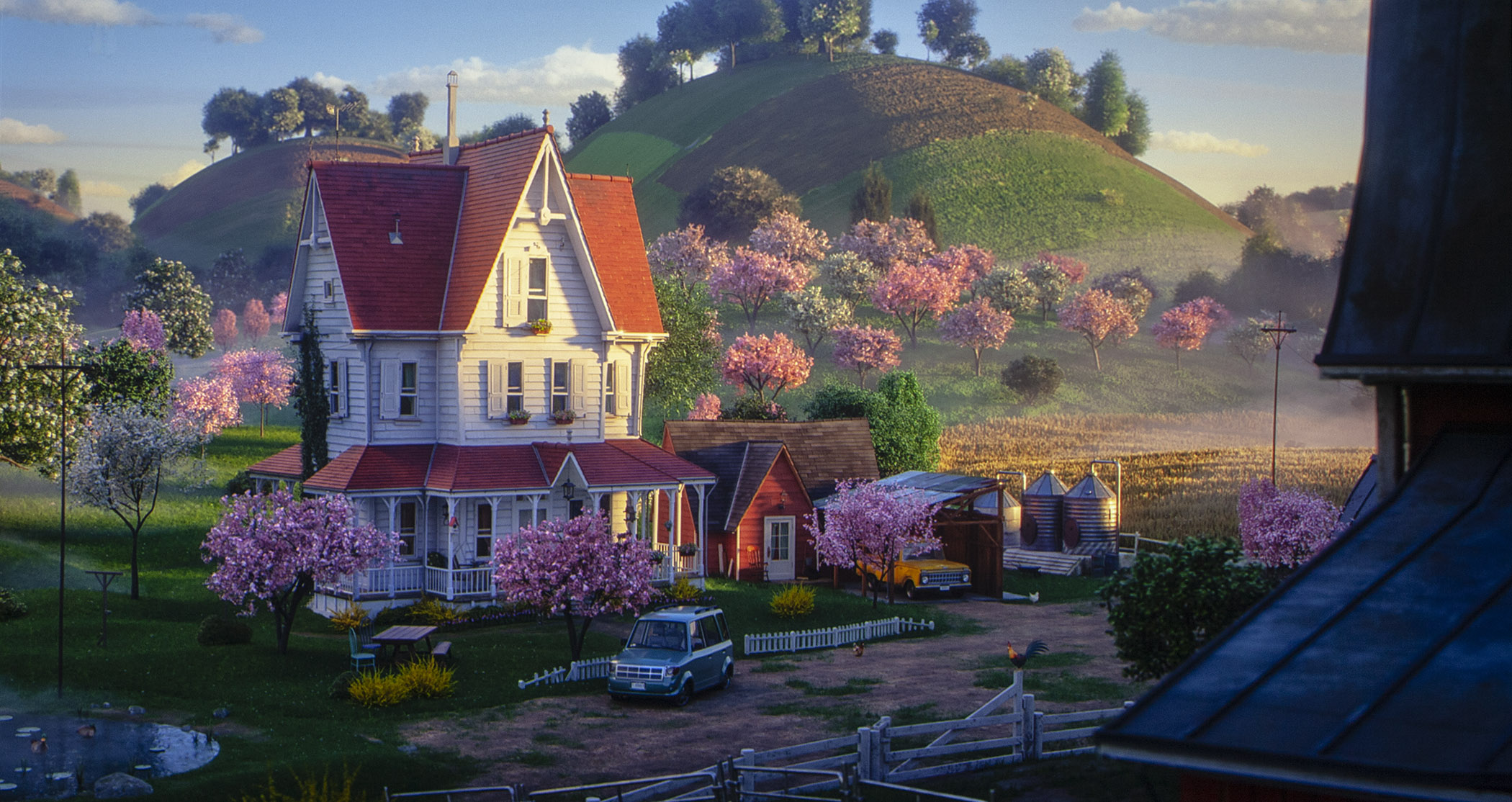 (1) Daisy (Tiffany Haddish) and Snowball rescue Hu and decide to hide him among the apartments in their building.  (2) Gidget rescues Busy Bee and becomes Queen of the Cats.  (3) Rooster and Max celebrate a good day. “Max is a neurotic mess, and Rooster takes pity on him and helps him straighten himself out, grow up. And then helps him, frankly, learn how to be a dog,” Ford says.  (4) Max to the rescue!  (5) The family leaves the farm to return to their city home. 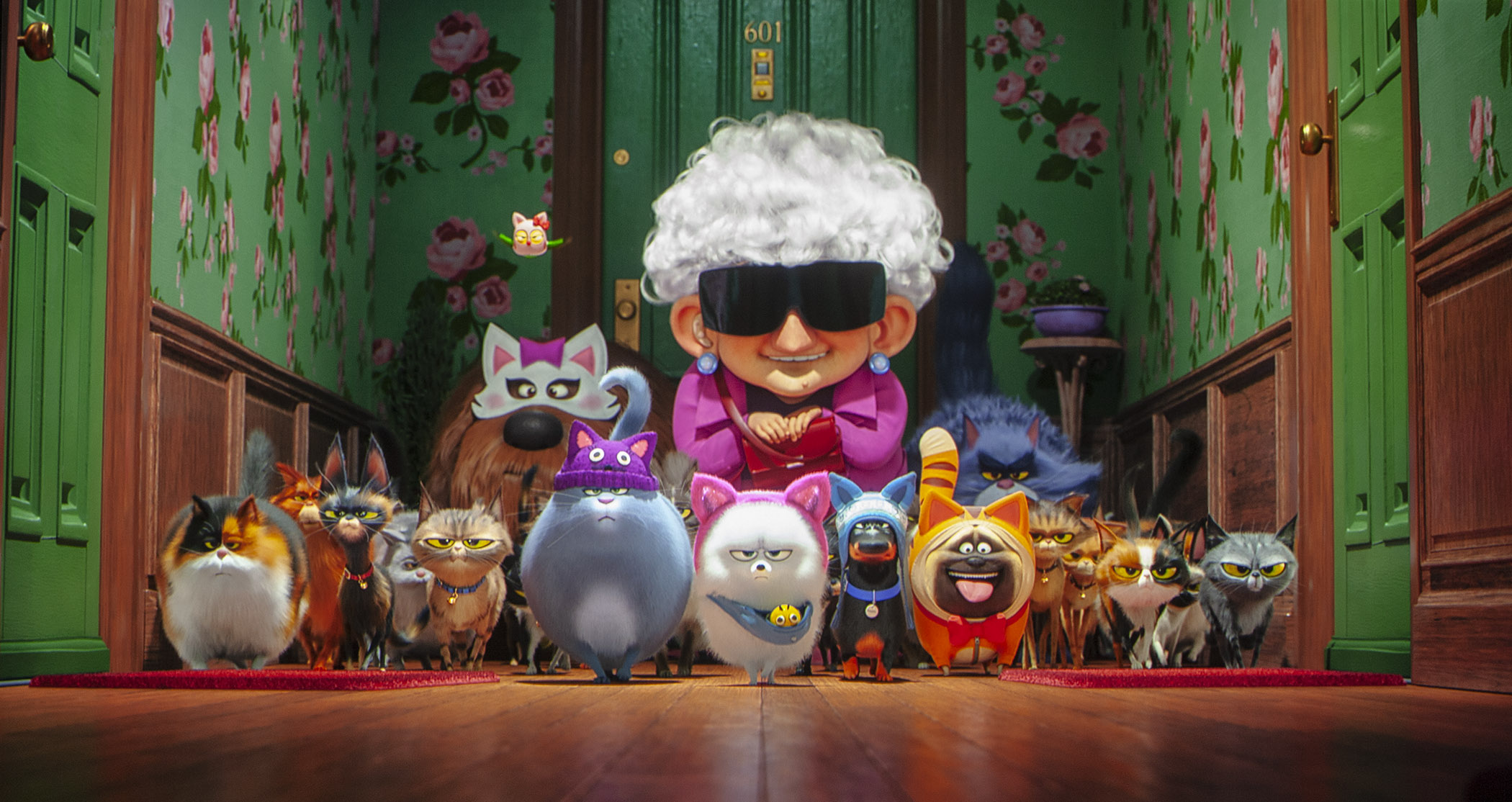 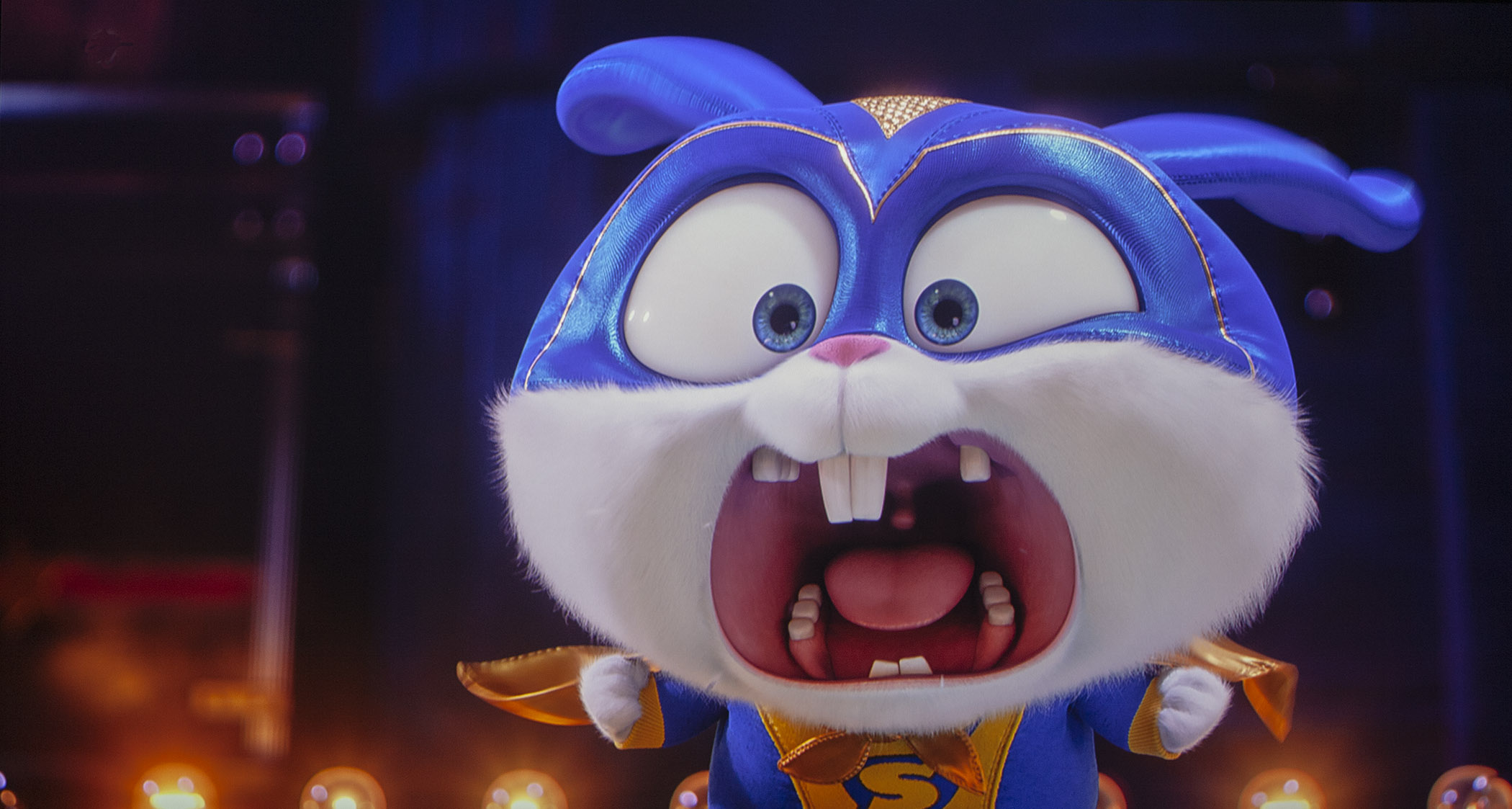 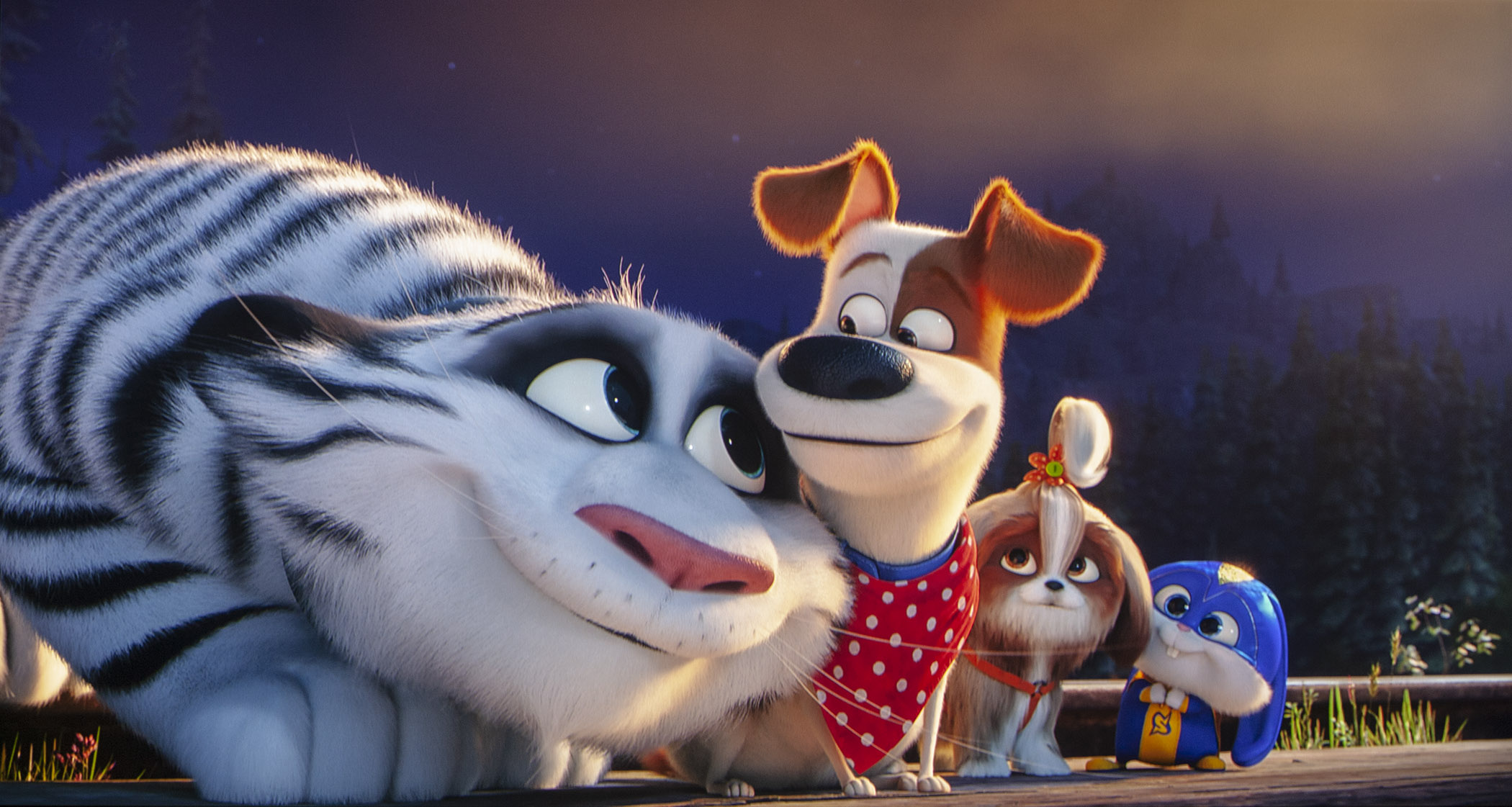 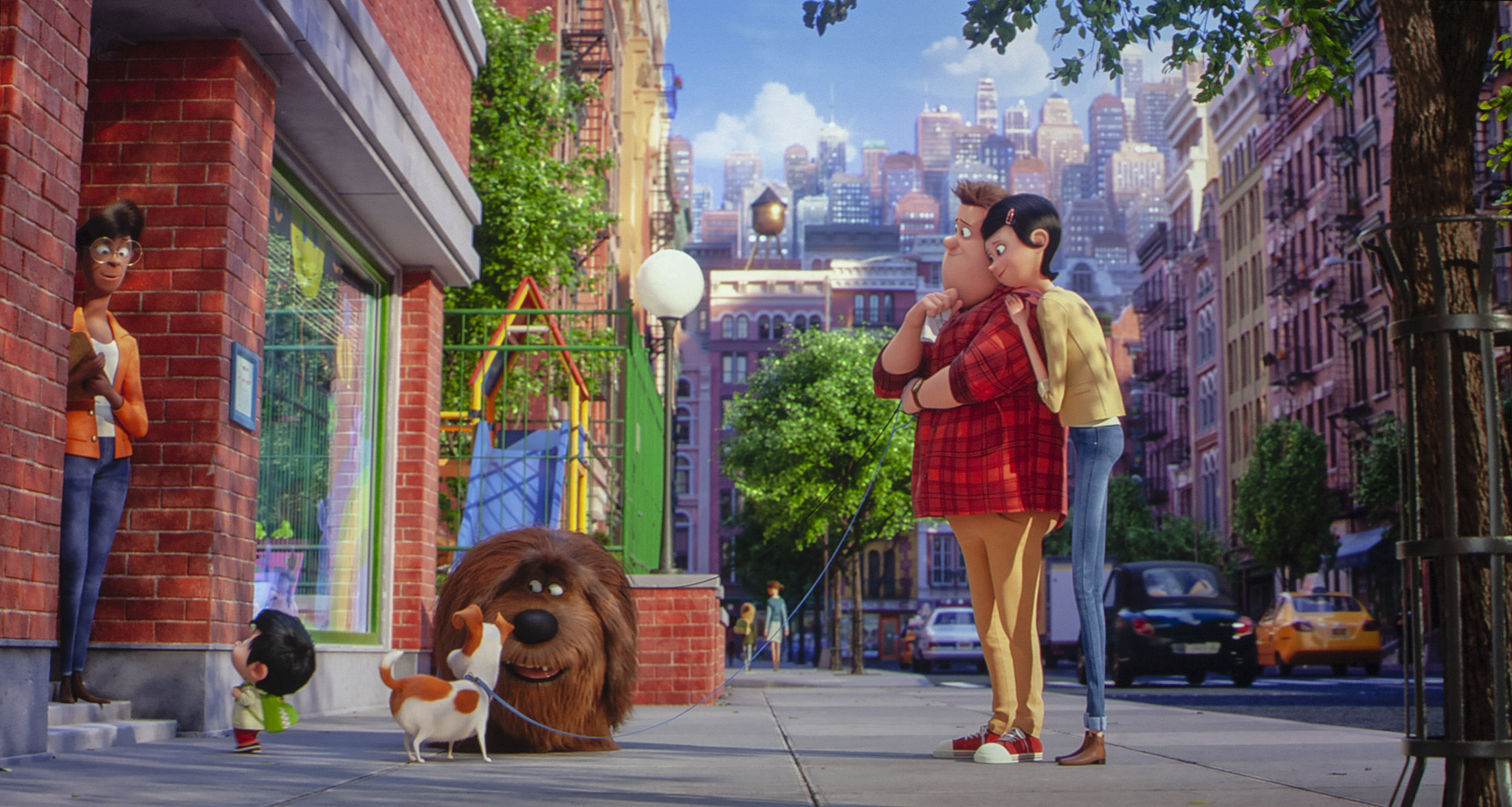 (1) Sergei re-captures Hu! The cat lady, her pets and Gidget and Chole set out to rescue the tiger cub.  (2) Snowball calls on his inner-superhero to face the bad guys.  (3) Baby Hu is happy to be among friends again.  (4) Liam attends his first day of preschool as his parents and dogs look on.